Remember our last weekend at Orchard Central for Summertime In The Park, with the likes of Monster Cat, Stopgap and Gareth Fernandez kicking ass live at the shopping mall? We suggest you free up your next weekend as well because it's coming back, sooner than you'd expect too.

We'll be getting a varied selection of seven bands this time, even spreading across the region to bring in some popular bands for you guys to enjoy during your unsuspecting shopping sprees. So here's our seven picks for the next OC weekend — a little more electronic, a little more adventurous, and we daresay a lot more fun.

Already a well-established band in Indonesia, Homogenic have amassed a huge following over the years and seem to offer live shows quite frequently. And it doesn't take long after bathing in their lush electronic soundscapes to understand this trio's popularity. Their clean, textured beats complement the smooth vocals and dreamy synthetics, adding an interesting dynamism to their soothingly pretty sound. These guys are a must for any electronica lover, or anyone who just loves to chill with good music.

Take some time and chill away with them at 3pm next Saturday, July 4.

Having already graced big Singapore stages a couple times before (you might've caught them at Laneway earlier this year), Malaysian band Enterprise are back to charm our socks off again with their distinctive and varied indie rock sound. Creatively exploring the endless possibilities of sonic patches and interweaving instrumental layers, the quartet create entrancing psychedelic imagery that makes you want to dance as much as it makes you want to contemplate the universe.

Catch their third set here next Saturday at 5pm, July 4.

The sincere, uplifting feel of December Avenue's catchy indie-rock tunes and heartening lyrics have earned the Filipino four-piece an immense and loyal fan base. Rousing riffs, compelling guitar solos and soaring vocals make for an inspirational sound that has probably provided many with that deep source of comfort and encouragement to get them through their days. You can trust their live performances to deliver both in energy levels, along with leaving you in higher spirits.

Up your spirits next Saturday with the band's live set at 8pm, July 4.

Electronic musician Gema's varied and enchanting soundscapes manage to be both zen and intense at the same time, with their sombre tones and his soulful vocals. His sound — not far off from James Blake's — oozes smooth maturity and hypnotic appeal as it extends its array of fascinating rhythms and ambient sonic textures. Offering an unexpected soundtrack for a mall, it would be cool to witness his live sets in such a contrasting space, especially with his ever-calm and meditative stage persona.

Unwind on your Saturday night next weekend with his show at 10pm, July 4.

They've wowed big stages like Baybeats and Urbanscapes since they were formed four years ago, and it's no wonder why. Blending the abstract yet compelling expressiveness of post-rock with the progressive math-y elements that enhance their distinctive sound, ANECHOIS' exceptional songwriting prowess paints evocative and atmospheric dreamscapes with intelligent creativity. No instrumental layer fades into the background for even a second, and the seamlessly woven menagerie of groovy, intricate melodies soothes as much as it amazes.

Get yourself mind-blown and moving with them at 3pm next Sunday, July 5.

Combining an eclectic selection of instruments to construct their unique soul/funk sound, The Good Life Project deliver fun and vibrant live performances each time. What's more with established musicians like Intriguant and NAztykeys in their impressive lineup, their suave, classy instrumentals and sultry vocals are an alluring killer mix. Artful but still accessible, also sure to get a crowd going, the seven-piece group serves up a great soundtrack for a busy mall.

Come and dance along to their set at 8pm next Sunday, July 5.

Their rock'n'roll vibe is a feel-good throwback to the sound of the 60s, whether you've lived through it or not. Complete with matching band outfits and charismatic stage banter, The Pinholes' live shows always transport you to a retro coffee shop from the good old days with their catchy riffs and classic humour. They aren't just your mere Beatles copycats either, adding their own distinctive and very Singaporean feel to their sound and image, which they got to bring out of our tiny island to Canadian Music Week just recently. Singapore represent!

Take yourself back in time and hang out with these guys next Sunday at 8pm, July 5.

Here's the full schedule and see you there! 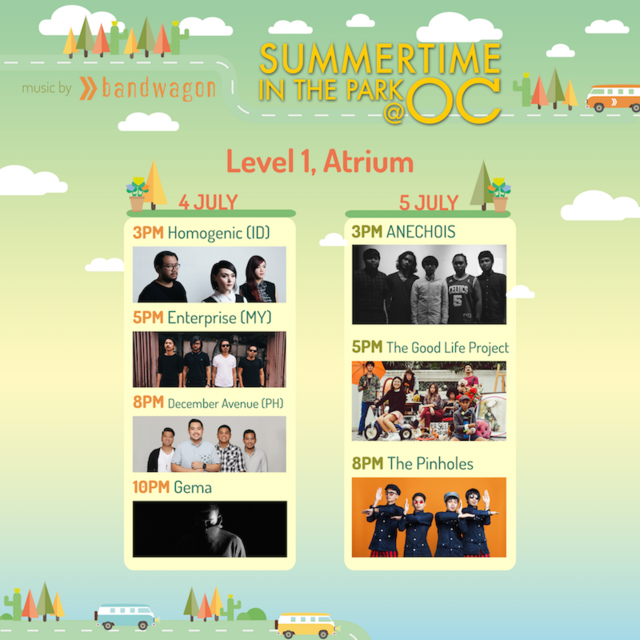