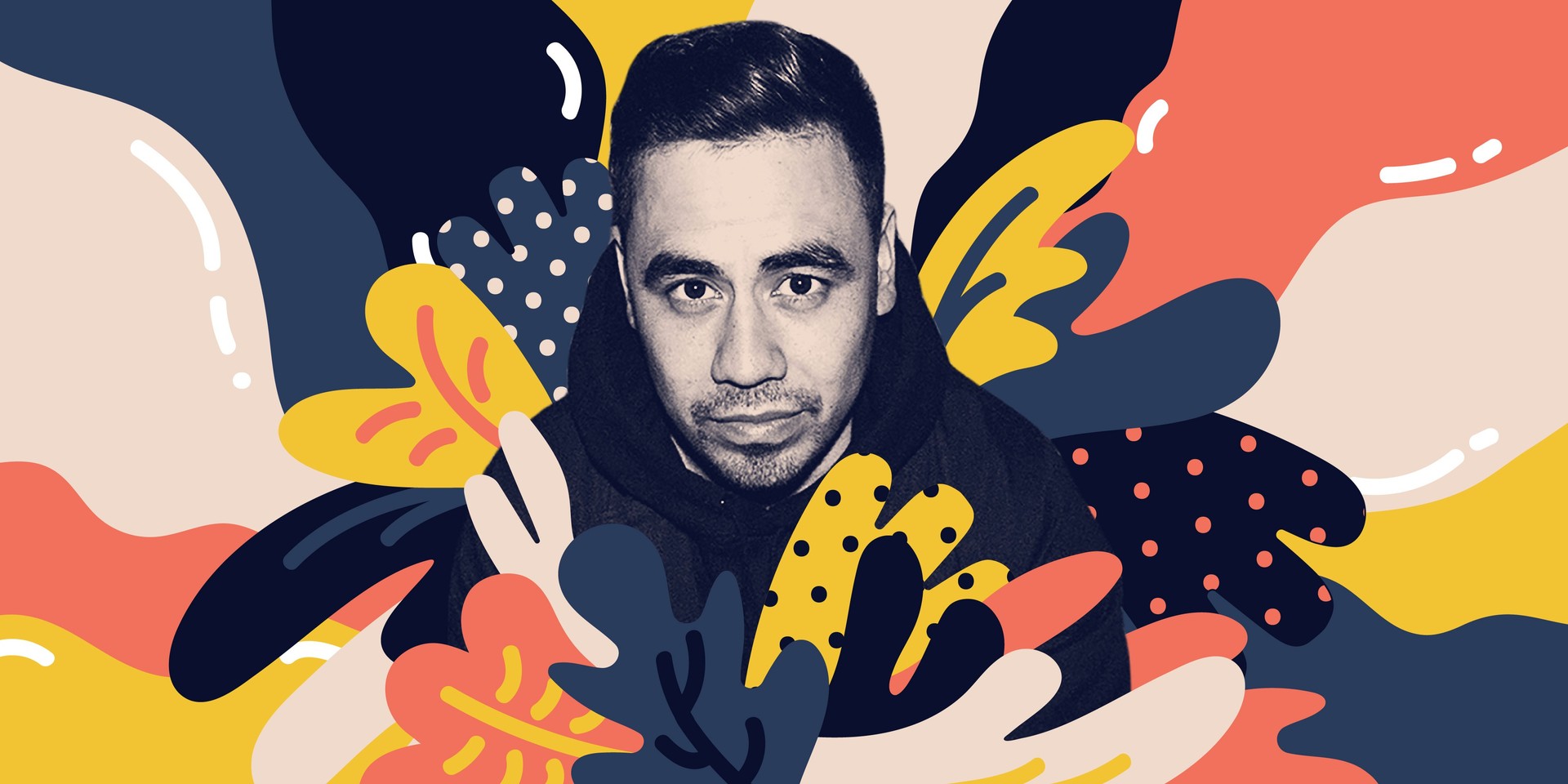 Look pensively out the window as rain pours across the horizon. Droplets slide down the glass like tears trickle down your face. You've just been ghosted by yet another potential bae, and you've finally got your heart chipped one too many times.

What now? What do you make of this moment? Throw your hands up in despondent surrender? Wallow in self-pity? Whatever the case, we suggest you begin by putting on some Songs to Break Up To. And your man Ta-ku's got you covered.

Turning your heartbreak into scenes out of a melodrama since 2012, Perth-based beatsmith, producer, photographer and barbershop owner Regan Matthews (going by the moniker Ta-ku) has released a bunch of stunning remixes, collaborated with the likes of Ty Dolla $ign and Chet Faker, and released several EPs — most notably his latest two narrative-driven offerings entitled Songs To Break Up To, and Songs To Make Up To. His tracks feel warm, effortless, and injected with a whole host of emotions.

With recent sold out shows at the Sydney Opera House and a new EP put together with songstress Wafia on the way, Ta-ku will be making his way down to Singapore for Beach Beats Fest this coming National Day, just before hitting up Malaysia for Good Vibes Festival, and an additional appearance in Bali for Potato Head Beach Club's Sunny Side Up Tropical Festival.

We spoke to the man behind the beats ahead of his upcoming tour, and he gave us the low down on more music to come.

Listening to snippets of your interviews, it sounds like you put a ton of thought into the ideas behind each of your tracks and how they come together as a cohesive whole. Could you tell us more about the process of how you conceptualize your EPs? Particularly your latest 2.

Yeah I guess I started writing about personal experiences and things that happened to me in life, and I found the process of doing it that way quite helpful. Because it was personal for me, it really helped me express myself a lot easier. Also the concepts of love and losing it and finding it again are pretty fascinating and quite relatable as well.

So for me I think if anything, when someone listens to my music, if I can kind of tell a story from beginning to end and make them relate to that, it means a lot to me, and I hope it means something to the listener as well.

Do you usually conceptualize the bigger picture before creating the music? Or are you more inspired by something, then subsequently fit it into a bigger idea?

I conceptualize more. I guess the older I get, the more interested I am in concepts. Then I write music after that. The main reason I started doing that is because I started tinkering a lot more with visuals and storytelling with my photos.

It's more intriguing to me to be able to think of something and then write to that. It's also a kind of little challenge to myself, to be able to do it in that order makes the process a lot more interesting and kind of more spontaneous.

I've always created things not with the aim to please everyone, but just to tell my story."

You write a lot about personal experiences, but when you're writing your music, do you sometimes find yourself wanting to create something that is more relatable to others? Or do you find yourself making something more true to your own experience?

I think it's very true to my own experiences. And I think because we're all quite humane, and we're all in the same boat, and we all go through the same things, it just happens to be quite relatable by chance.

But for me, the most important thing is to be true to myself and hope that there are some people out there get it and relate to it. And if not that's O.K. I've always created things not with the aim to please everyone, but just to tell my story.

I'd like to ask about your most recent single "Meet in The Middle" off your upcoming EP (m)edian, could you tell us more about this "intricate storyline" that you've hinted at on facebook to feature on (m)edian?

So (m)edian is an EP between me and Wafia and we're talking about a personal experience that her and I have had. And that experience is between relationships with our fathers.

So 'Meet in the Middle' sounds like it's a love story between a man and a woman, but it's actually different. It's actually about her father and her, and my father and me. There's been things that happened between mine and Wafia's life, so we've had to really... [pause] self-sacrifice a lot for the sake of our fathers and it's been a long journey for the both of us.

It's been really rewarding and helpful to write this EP with her about it, just to put a lot of feelings and things we've gone through out there for the world to hear. It's kind of subtly disguised in what seems like a love story between a man and a woman, but it's actually more than that. But I think that's what's great about music too, the fact that anyone can listen to this EP and take it for whatever way they want. They can interpret it in any way they want, and that's what makes music so special.

Did (m)edian stem from the same place as your two earlier EPs?

Yeah it does, I think that whole story telling concept is really appealing to me and I think it's something I'll be doing for a long time. I've talked about losing love and then finding love again in my two latest EP's and I've always wanted to write music about my dad, and this would be the chance I got with (m)edian. I also want to write about other experiences which will be via my album.

And can we expect to see that (the album) coming out soon?

I hope so! I'm still early stages, but I'm really excited about how the album is going to come about. I really want people to be involved in the making of it as well, in addition to listening to it when it's done. So I'm kind of just conceptualizing all that at the moment and then I'm excited to roll it out as soon as I can.

What do you mean by more involved than just listening?

I have an idea where I want people to actually hear and see me make the album, where they can be involved in the narrative of the album too. So my audience can be involved with some of the themes of the album and maybe in the names of the tracks. Even having people send in bits and pieces, contributing musically to it as well. It's something I'd like to do.

You mentioned how when you were making Songs To Break Up To, it was meant to be a "cinematic soundtrack for someone going through heartbreak." Given your work in photography, have you ever thought of combining the two mediums?

Yeah for sure, that's something I really want to get involved with. I want to really delve into creating my own videos and creating my own visual representation, making my album a complete visual experience — not just at the shows, but in some way when they buy my album on iTunes. Just giving them something more. And that's part of the big kind of conceptualization I want to do for my album — to make it more of a movie, if anything.

So can we expect something along the lines of Beyonce's Lemonade?

Yeah, I mean I think Lemonade was really amazing and I'd like to do something very similar, but something more narrative and less video, y'know what I mean?

Lemonade was great but it was just so polished, and I feel like I couldn't get into that world or relate to anything that was going on in there. It seemed like a very grandiose sort of thing, but for me I want to make something a little bit more real, something that is more my own experience — something we've all gone through.

At your recent sold out show at the Sydney Opera House, was it your first time singing live in front of such a huge audience?

Yeah, it was pretty nerve wrecking. I just had to go for it. Even though I know my voice isn't perfect and there are some parts I could improve on, it was just great to be able to do it. And I'm glad that I did it. Of course over time hopefully my voice will get better, but um... I think I did ok?

Are there any shows you're particularly looking forward to on your upcoming tour?

Going through Asia, through Singapore, through Malaysia and Jakarta. Because I'm half-Filipino, I love Southeast Asia a lot, I just can't wait to get out there. I feel like a lot of people out there are more like me (laughs) and have more appreciation for the things that I've been brought with and things that I learnt and saw and ate.

Special thanks to Good Vibes Festival for setting up this interview.