After years of conceptualisation and months of overnight preparations, it's safe to say THE BANDWAGON was a success. This idea of a festival bus was borne out of Bandwagon's modus operandi from Day 1: to connect people to live music and to give local music a bigger stage. We've also had a bigger, more ambitious dream: to connect Singaporeans with like-minded music fans beyond our little red dot. THE BANDWAGON marks that very first step.

With the generous help of our sponsors along with the outstanding cooperation of Urbanscapes Festival, we were able to realize this project with our first cross-country road trip that involved everything from live music to a communal breakfast session with cider, all aboard a moving vehicle. Here's what went down.

THE BANDWAGON officially left Singapore at 0730hrs on a cool and breezy Saturday morning with a grand total of 120 music junkies spread out across four deluxe coaches. In each bus, there was a dedicated emcee along with a rotating roster of artists who were responsible for providing the onboard entertainment. We engaged four engaging personalities to take charge of each bus, along with a reliable IC tasked with meeting the needs of the passengers.

We had a fun group of emcees and bus musicians, all decked out in sweet Bratpack gear, who managed to excite the crowd even before we reached Genting. On the mics, we had the ever-charismatic Aarika Lee, charming Stopgap frontman Adin Kindermann, laid-back music writer Hidzir Junaini and Bandwagon's own Juhardi Mohamed. The emcees conducted games and activities that resulted in some passengers winning some prizes, from Bratpack merch to Gentle Bones tote bags and Inch Chua's debut novel. Even the last bottle of Somersby cider was up for grabs on the way back to Singapore.

Of course, road trips are not without their faults and we did face some difficulties along the way. One bus had a karaoke system that failed on us, instantly ruining plans for a karaoke contest. In place, the ever-charismatic Aarika Lee, the emcee on that bus, held an open mic that even saw the participation of veteran local musician Kevin Mathews.

Delicious cider from Somersby was distributed around when the bus set off, lightening the mood and starting the day early when people were just beginning to recover from their naps. YEO’S and Mamee were responsible for providing onboard snacks which satiated passengers all the way. We also gave out headwear courtesy of the good people from Bratpack, of which the passengers promptly made use by wrapping them around their heads in various methods. The funniest ones were rewarded with more Bratpack goodies because they're just that awesome.

The musicians themselves eagerly took part in our project in the beginning by tackling a concept no one has ever done, in this part of Asia at least. Performing live music on a moving bus. This was something we had taken careful deliberation regarding safety measures, given the unpredictable traffic of the Malaysian highway and many other uncontrollable factors. We briefed the musicians beforehand and they were game all the way. Buses were retrofitted with custom wooden platforms that the musicians were able to sit or lean on. Meanwhile, we spent a considerable amount of time to ensure sound quality was top notch by adding in a sound system that resulted in crystal-clear audio throughout the journey.

The performers were able to play their sets without a hitch (well, mostly). Gentle Bones played his familiar hits off his debut EP along with a hilarious botched attempt to cover Arctic Monkey's "Why'd You Only Call Me When You're High?". On the other hand, Pleasantry successfully covered Melody's Echo Chamber's "I Follow You", Inch Chua captivated the passengers with stories behind her songs and .gif got everyone to scream animal noises. The bus driver was startled by the ruckus but it was all good.

After landing at First World Hotel, we were treated to a hearty lunch buffet courtesy of Resorts World Genting and we made our way to the festival, some by bus and others by the cable cars which provided an incredibly scenic view of the vast Genting landscape. Urbanscapes by all accounts was a roaring success. Live music was the dominating factor that night with electrifying performances by alt-rock band The Lemonheads, indie-rock group Local Natives, dance-rock trio Jagwar Ma and New Zealand powerhouse Kimbra. Our own local natives Cashew Chemists even had a set towards the evening, captivating festival-goers with their brand of intoxicating pop-rock.

We were there to witness the sets as a huge group, getting drenched in the rain waiting for Local Natives, who came down to Malaysia for a one-off show after ending their tour a few months back. Kimbra's infectious set showed a remarkable improvement in musicianship since her appearance here at Laneway last year, while Jagwar Ma continued to make good on their promise to tour Asia since their no-show at Laneway this year. Various pop-up art installations, food stalls and activities were also there to keep festival goers entertained.

Urbanscapes ended on a high note on Saturday night but we carried on the festivities on our bus with more live performances and giveaways including keychains by Tourism Malaysia and Bratpack vouchers. Well, at least until we reached Newton Food Centre anyway, where we said our goodbyes to some of the most lively and fun music junkies we had the honour of sharing a bus with. Urbanscapes 2014 may be over but this is just the beginning of THE BANDWAGON. Keep your eyes peeled. 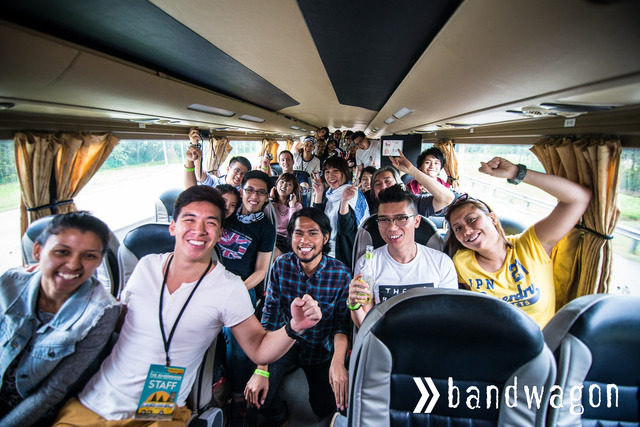