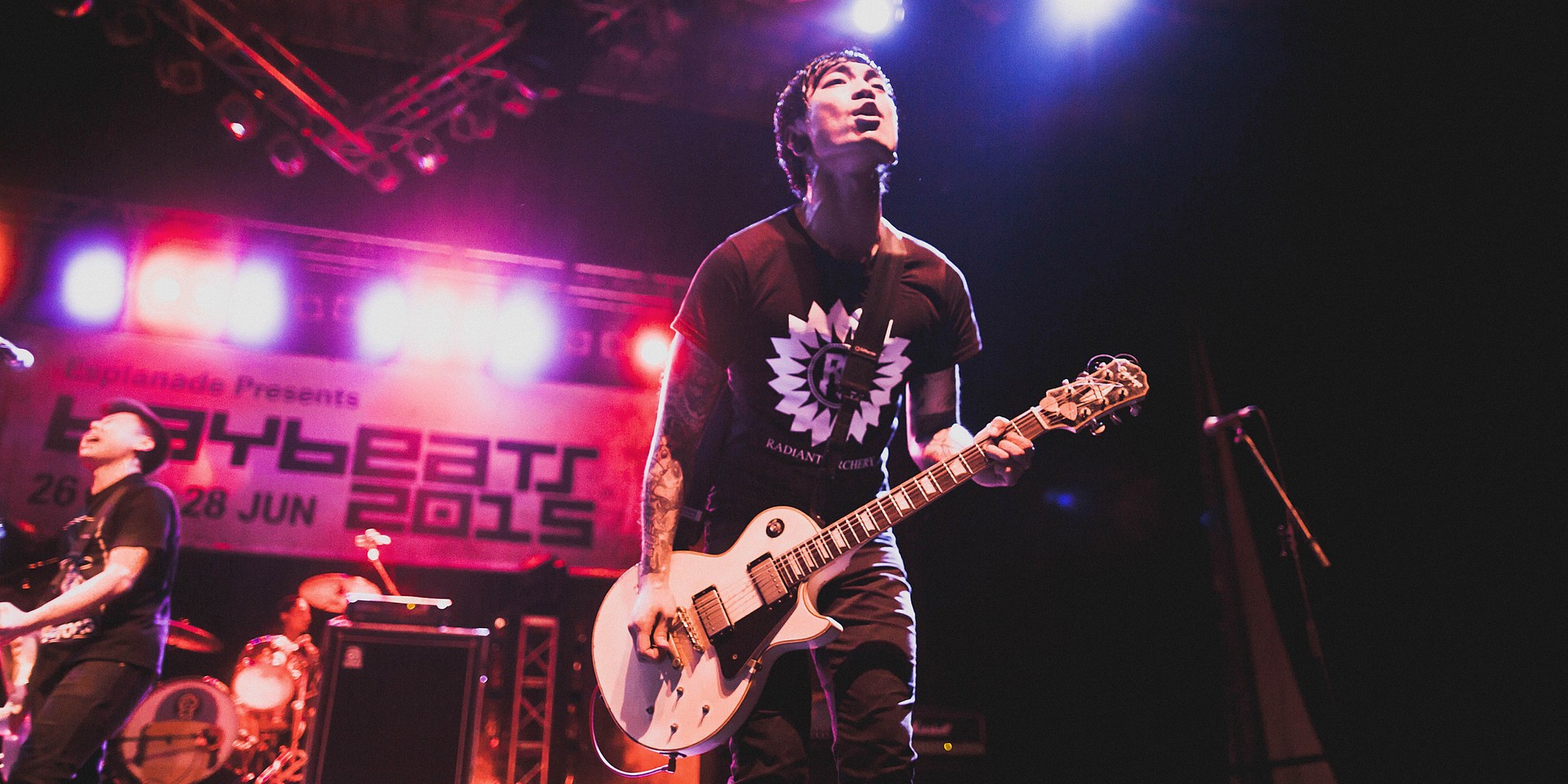 The Caulfield Cult's CULT is undeniably their most mature-sounding and visceral album to date, in all of its 23 minutes. Its brevity becomes more admirable with each listens, revealing and digging through more of the ideas packed in through its short running time.

CULT follows two albums that depicted a band getting comfortable in its own skin, branching out enough to stand out from a sea of newer post-hardcore and punk bands. CULT sounds rough and heavy, but its hard-and-fast ideas are filtered through enough sonic clarity to earn themselves an edge of accessibility.

"Musically, we were trying to go for a clearer sound to do us justice, but not going over the top, like sounding better than how we actually are live," says Nicholas Wong, frontman for The Caulfield Cult.

The band is made up of Wong on vocals and guitar, Brian Chiong (bass and backing vocals), Feroze Mcleod (guitar) and Andrew Kellocks (drums).

Wong is the main man behind the operation, and he brings us through the entire album — talking a bit about each track, and how the band tackles themes relating to relationships and the weight of it all, jealousy, self-esteem, embracing imperfections. "Lyrically, I aimed to write this record as transparent as I could," says Wong, "and I tried my best not to bury words under heavy, overused and watered down metaphors."

Read on through, and stream CULT in full, to find out what he has to say about songs like 'I Can't Save You', a standout featuring Self Defense Family singer Patrick Kindlon, the influence on films on several songs here, and how 'Our Wounded Vessel' is their most "Foo Fighters" song.

'I Don't Want You Anymore'

When I wrote the riff at the start of this song, I knew it had to be the opener. Neing influenced by a lot of mid-00s melodic hardcore, octave chords are automatically a staple in our music and their simplicity to pull it off didn't clearly expose our lack of musicianship, which is good.

I wrote this song about not wanting to be temperamental anymore, not wanting to get upset over the smallest things. A recurring theme on this record is how whatever situation I deem as a tragedy in my life, it's not the end of the world. I wouldn't call it a positive record, but it's written with perspective I've gained from growing up a little and travelling a lot — how there are worse things in the world than whatever I go through.

A friend showed me an article where a journalist interviewed various musicians about who they were most keen to watch at Fluff Fest and Henning from Suis La Lune mentioned us. I took that opportunity to speak to him about doing something with us and he was happy to do so.

He sent us the recording of his vocals within a week of this being brought up. It's pretty cool that somebody in a band of that stature would be interested to do something with a "nobody" band like us.

Danny from Cavalcades told me this song is very "Tony Hawk". That description is dope.

We always have one song on every record that sounds really out of place and this is that song on this one. When we were testing out mics to see which is the best to use for my vocals, Cedric (our recording engineer) made me sing this over and over again. That was when he realized my vocal ability and endurance are very limited.

This song is about a person who harbours unwanted possessive feelings over another being, who he or she may be romantically involved with, even though he tries to be as "new age" and open-minded as possible. Pretty obvious.

This song was in our split with Abolition A.D. I really like this song and I felt like it needed a better representation in terms of quality. Also, it's because we were lacking a second guitar player when the first version was recorded.

The title is a reference to the main protagonist/narrator in the 1987 film Withnail and I, in which his name was never mentioned. If you haven't seen the film, Marwood is an unemployed, luckless, wannabe actor who lives a life full of pink slips and drugs and alcohol. He's the more level-headed of the two main characters, and is often the only one who worries and stresses about shit they get themselves into. He later seemingly leaves his delinquent life and Withnail for a proper opportunity.

This song wasn't written for said character, but I see the similarities of the mood of the track and personality of the fictional piece. Fueled by a realization of a need to slow down and look at how and why things aren't working out as planned, and maybe there's something out there less glamorous one can find true happiness in. 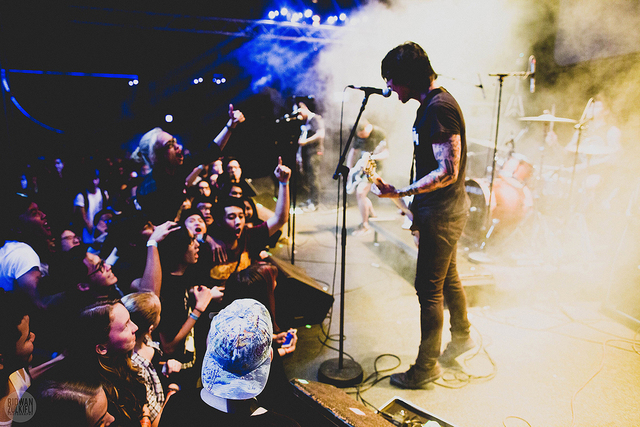 The title of this one is from The Life Aquatic of Steve Zissou, when the title character said "We make our voyage home in our wounded vessel" after his "son" died.

I find that quote very fascinating and relevant to this song, having to carry on in an imperfect, damaged and vulnerable ship after traumatic events. I would have the entire quote as the title of the song but we're not Fall Out Boy.

The meaning of the song is pretty obvious as well so I'm not going to go into that. The rest of the band thinks this is our "Foo Fighters song", I don't necessarily agree but if they think it's corny enough to be deserving of that comparison, I won't stand in their way.

This comes from a quote from the movie O Brother, Where Art Thou. This one was intended to be an intro to 'Inadequate' because we thought we have too many songs that starts with singing right away, so we wanted to add some dynamics to it for live performances' sake or some shit, I don't know.

We toured with Disembarked last summer and frontman Pontus has one of the most captivating screaming vocals I've heard, so I thought it'd be interesting to have him on a song. 'Inadequate' has some nice guitar parts and is a quick favourite for us to play. Another obvious one, song's about coping with self-esteem and self-worth.

Jeremy from Endless Heights said I look really weathered for my age, and he thought I was much older than I actually am. I thought 'Weathered' was a pretty funny way to describe a person. I recently found out Creed has a song with the exact same name, which makes this so much more amazing that it already is.

Some might notice the chorus of one of our older songs 'Etched' is repeated at the end. I wrote this song about feeling burned out and tired of putting everything I have into something with minimal returns, and how my quality of life worsened trying to do something that would seemingly make it better.

It's rather tongue-in-cheek, kind of saying: "Well, if you like shitty repetitive music so much, here's something exactly the same as what we've already did." I think we all agreed collectively that this and 'Inadequate' are two of our favourite songs to play from the record.

Andrew and I went through this song for the first time just one day before we entered the studio for recording. I don't like over-thinking composition and sometimes these spontaneous songs can be very fulfilling to play.

I'm a superfan of Self Defense Family and met (frontman) Patrick Kindlon when we played The Fest in Florida, in 2014. I spoke to him for a bit, exchanged e-mails and kept in touch here and there since.

I remember Cedric telling me: "Either the recording is really weird or dude has a weird voice." I love that Patrick has a very unconventional singing voice and something that's immediately recognizable. It doesn't really fit well into most types of music and I think it's brilliant. He wrote the lyrics for his parts too which is pretty cool. Another tongue-in-cheek one, basically about how writers to over-dramatize things all the time.

Another re-recorded song because we play this song so frequently live, and we did so poorly with its previous recording. I really am not a fan of re-recording music and I don't like it when bands do it either. It's sort of like "oh you think you can do better?"

But sadly, it was either this or we stop playing the song live altogether. I don't want people watching us live for the first time and going back home to look up this song on the internet, only being able to find the version — which is basically just feces for the ears.

I wrote this specifically as a closer to the album. Sequence of songs for a LP is kind of a big deal, something that is not necessarily as important for EPs.

But choosing the right opener and the right closer is always something I've put thought into. One of two songs performed with finger-picking on the guitar (the other being 'Two Weeks From Everywhere'), I couldn't be happier with how it turned out.

The vocals were a pain in the ass the record — I had to do the verses at one entire go due to it being very wordy and closely-packed. Playing back, this is my favourite song from the record to listen to right now.

Maybe it's because the song features mostly me and I'm secretly narcissistic.