According to the Cheats' Facebook page, the band describes themselves as “a collective of couch potatoes strung together by a love for video games, melodrama and rock anthems. With influences that range from LCD Soundsystem to Radiohead and the Spice Girls, Cheats sets out to create sweet melodies with a bitter aftertaste. In short, they want to make people dance all night before crying on the ride home.”

And on the song ‘Crash’, the lyrics go “She sits alone in a photograph/Every sin has a different flash/I said, ‘Please stop talking to yourself.’” So on paper, the band's pathos is palpable.

The music however is a happy contrast, with sweet harmonies from vocalists Saab Magalona-Bacarro and Candy Gamos wrapped around Jim Bacarro’s warmer voice and occasional synth texture. Behind them, bassist Manny Tanglao and 19-year-old drummer Enzo Hermosa lay down an aggressive groove. Mau Torralba, Ernest Aguila, and Jason Caballa deliver chords and fills that, quite admirably, never get in the way of each other or the vocalists, save for a few off notes that are probably due to the restricted performance space in the fully-packed Saguijo, and sweat building on fingers and strings. 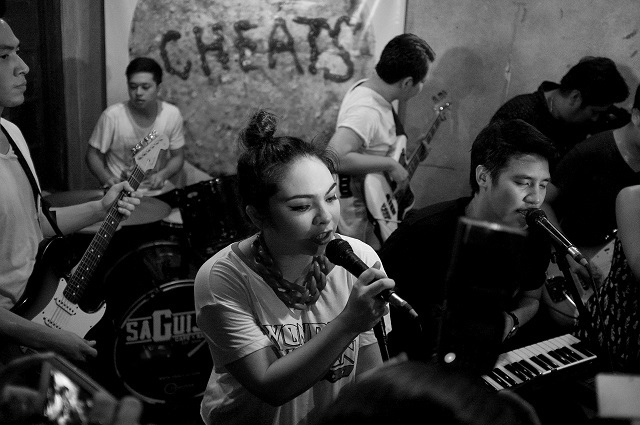 The song winds down, gentle notes cradling the last stanza: “Please don’t crash/By the way, you’re going down.” Then, they slam into a frenetic rave-up increasing in tempo, the last six words sung like a cheer and a taunt, the entire audience jumping and screaming along. Everybody is sweating and smiling and, barring quotes from White Stripes and Smashing Pumpkins while a technical problem was being sorted, it is just the first tune of their slot.

The Ransom Collective, Oh Flamingo, Sandwich, and Pupil all played enthusiastically received sets. The audience, which spilled outside the venue, are clearly fans of each band. To play after heavyweights Sandwich and Pupil is daunting, but tonight, Cheats had nothing to worry about (if they worry at all, being the carefree troupe they are)…  And after their 45 minute set, it is unlikely anybody went crying on the ride home. 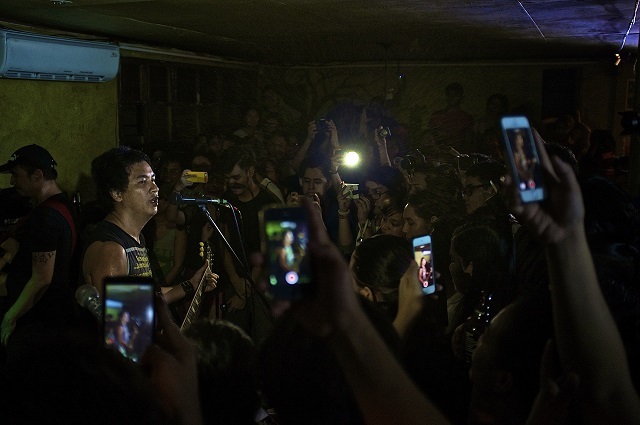 Cheats formed in 2013 after Jim’s and Manny’s original band Ernville, which also eventually included Ernest, broke up. Saab and Candy ran a gig production group called Girlscout that regularly booked Ernville. Jim explains, “We had no idea what we were gonna do. Remnants of Ernville were me and Manny. Originally it was supposed to be, like, a drum machine and the two of us (like LCD Soundsystem). We invited the girls ‘cause we always hung out, they started singing to the parts, and I said, ‘Hey, why not? The more the merrier.’... The original concept was me and Manny, ‘Bahala na sa gig, we’ll get new members.’"

As for the band name, “We all play video games; originally we were thinking of videogame-y titles like ‘Hadouken,’” offers Candy with a laugh before Jim adds, “the (band’s) bond, the friendship was created when we started scoring video games together. Our jamming was putting the video games on ‘mute,’ and then we’d play our instruments. Gameshark, Hadouken, Left left, right right, down down, right up… then we said ‘minor cheats.’ ”

One of their biggest gigs, venue-wise, was the 7107 Music Festival Local Stage in Subic. During their performance, Saab and Jim were playfully egging each other onstage. Saab seemed incredulous of the performance before laughing it off as something spontaneous, “Candy couldn’t make it to that gig, and we felt like the stage was so big. So… that was some sort of PDA.”. With such sizzling onstage chemistry, you wouldn't be surprised to learn that the duo are happily married. 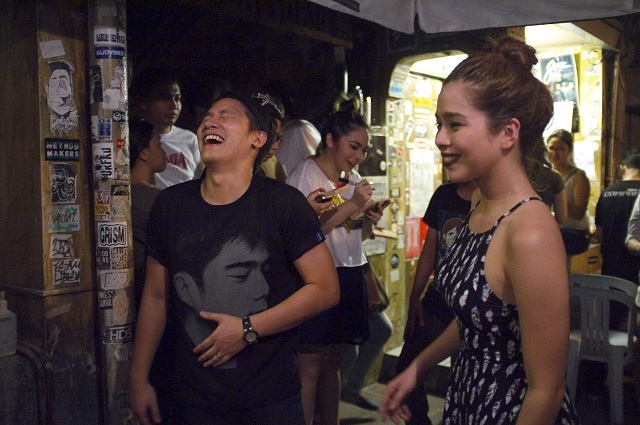 Jason, otherwise known as Pedicab’s guitarist and a notable music scribe, is the newest Cheats-er. He was asked to fill in for Ernest who, like Mau, is in law school preparing for their upcoming bar exams.

“Jason was supposed to be part of the original line-up… and he rejected us,” laughs Saab. However, Jason was busy working in advertising then and the album was finished by the time he was asked to re-join. So what input does he offer currently? Saab quickly responds, “Not much. Joooooke!!! No, he’s the one that calms us down (laughs).” And the band agrees that Jason’s experience and insight add to the collective mix perfectly. However when Ernest returns to the band properly, the Cheats will have a three guitars led line-up. But Jason says he hopes to play additional percussive instruments as well and points to Queens of The Stone Age’s Troy Van Leeuwen as a reference.

The band’s pizza-delivery box album packaging was conceptualised by Candy and Saab with the CD itself looking like a cheese pizza. It is a tongue-in-cheek symbolism of the band’s playfulness, and as gamers, their food staple. Contributors and members past and present are like “the additional toppings” according to Saab. 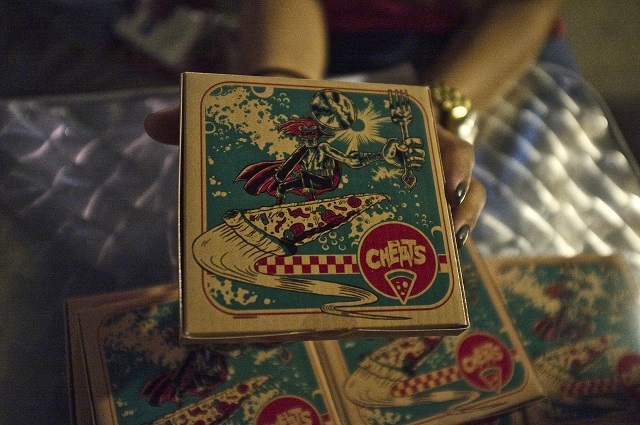 As for the Cheats’ musical direction, Jim admits, “I’m a huge Arcade Fire fan… But then I realised I still wanted to do more LCD Soundsystem, and the girls wanted to do something more poppy. When Saab and Candy hear a melody, they automatically blend to it…” And Candy is quick to add, “That’s what makes it interesting also when we make songs... Jim builds the base and we add our own flavours to it.”

As for their Spice Girls influence, it’s probably more the perkiness rather than vocal stylings as Saab explains, “I don’t think there’s any (conscious) influences on our vocal harmonies because when Jim makes a song, we just add our parts. We just happen to be harmonising when he sings. It just comes out naturally... sometimes the songs sound so different… like ‘Summer’ is so different from all the other tracks… it was mostly me and Candy who did the vocals… it has a more girly West Coast vibe. But I think it works because everyone else just puts their own thing into it.”

The 10-song album was recorded in The Bunker with Ely Buendia in the producer’s chair. The prospect of having a legendary figure overseeing your songs is intimidating enough, but it was amplified by Buendia’s hidden dry sense of humour. Candy recalls, “It was fun and nerve-wracking at the same time. Whenever we’d record in his studio, whenever we’d do our takes, he would usually be so poker-faced we wouldn’t know if he’s happy or not… Sometimes it’s hard to read him, even when he cracks a joke.”

Jim elaborates, “People may have their notions of him but… he’s actually too nice. And he would be so nice during the recording process that it would take an extreme off-note or off-time moment for him to go ‘Hey man, re-take.’ BUT, he will always give his honest opinion. One example is when we were doing ‘Headfoam’ and I asked him, ‘What do you think, man? I added a grand piano at the end. I just thought it might be a good ending.’ And he emailed me, ‘THAT, my friend, is the epitome of cheesy.’ So, if he really doesn’t like it, he’ll tell it like it is.”

Jim is wearing a shirt bearing a huge portrait of the late hip-hop icon (and Buendia’s close friend) FrancisM.  He says, “It always comes up in our conversations, ‘You think he would have liked the band?’”

Saab glances at the shirt and confidently says, “I know he would have been a fan because he’s also a video game geek (chuckles).” She generally refers to him in the present tense.  “My dad is known for hip-hop and rap, but a lot of my rock influences comes from him. He has all the albums of Nirvana, the Beastie Boys, and Rage Against The Machine… He’s a big rock fan and Diego (Castillo) says he supported Sandwich when they were starting out. I’m not expected to be hip-hop or rap; I just feel like I need to be in music also. So I’m glad to be in the band, and I’m glad we have an album.” 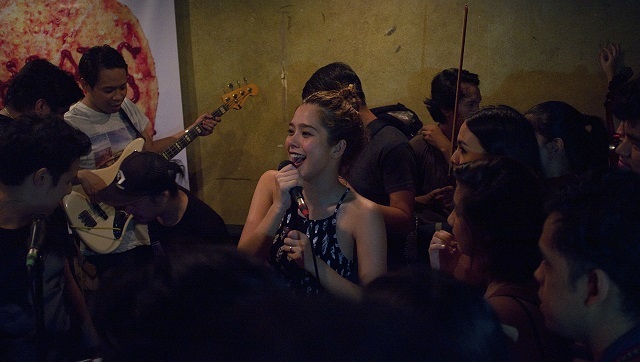