Tim Sweeney has been on WNYU’s airwaves since his freshman days in 1999, which probably makes him the most longest running (and oldest) college radio host in history.

Airing every Tuesday night from 10:30pm to 1am, Tim Sweeney has spent the last 16 years - one weekly show at a time - turning Beats In Space from a cult campus attraction into a global music institution. These days it wouldn’t be unusual to see names like Jacques Greene, Four Tet, Ben UFO or George Fitzgerald drop by to hang out, have a chat and drop a mix.

But aside from his seminal radio programme, Tim Sweeney has also quietly become one of the most influential figures in New York City’s underground electronic music scene. From his internship with Steinski to the early days of DFA Records to the rise of Beats In Space, we got Tim Sweeney to look back on his disc jockey journey.

Hi Tim! You’re probably best known for turning people onto outstanding but obscure electronic acts. But who first introduced you to electronic music growing up?

For me it was my older brother. I remember my brother bringing back recordings of Coldcut’s radio show from London and that was probably the biggest influence. I listened to a lot of old records too. I was living in Baltimore then and I regularly went to a store called Modern Music to buy mixtapes and stuff. And then my brother started DJing so I copied him. (Laughs) I started in the 8th grade so maybe I was 14 years old or something like that.

That’s really young! What were your early gigs like?

They were really funny actually. I had a lot of shows in Washington DC, and I remember I had to get friends to drive me because I wasn’t old enough to drive. And it was always an issue getting into the club because I was underaged. But it was only when I moved to New York that things got more serious I guess.

Yeah I read that you moved to New York City in the late-90s to study. Was that your introduction to college radio?

No, my brother actually had a radio show in Pittsburgh. He went to Carnegie Mellon, so I played on his radio show when I visited. I also played a show in the University of Maryland. I remember cutting class in high school to go play that one. (Laughs) So those were my first experiences with radio. That’s how I knew that once I got to NYU (New York University) I wanted my own radio show.

"I suppose I just wanted to have fun and play good music for people. I didn’t want to compromise and I wanted do what I liked. I never cared if it got the most listeners or not." 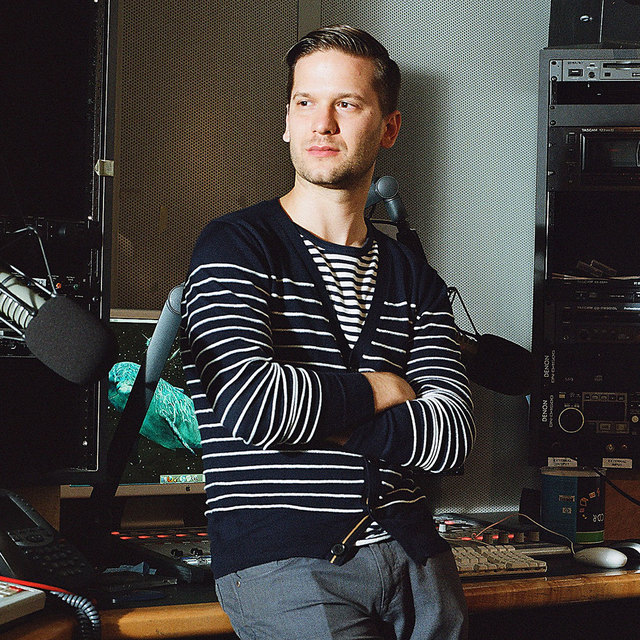 So how did Beats In Space get started?

I immediately contacted the radio station, WNYU, and they were cool with it. Well my shows were a little more freeform than they wanted because I played a variety of styles. I proposed it as a DJ mix show. At the start it was just me all the time, and then it slowly grew with guests spots. And when you get one big guest, it became easier to get another, and so on.

You’ve been running the show for 16 years now. What’s been the show’s philosophy throughout that time?

I suppose I just wanted to have fun and play good music for people. I didn’t want to compromise and I wanted to do what I liked. I never cared if it got the most listeners or not.

That’s the thing though, it did end up getting a lot of listeners. How did it go from just another radio show to the phenomenon that it is today?

I think working at DFA really helped. When that blew up, it helped my radio show grow bigger because I had all this music from DFA that everyone wanted to hear and I got to play it first on Beats In Space. Having the big name guests on really helped with the exposure too. I think that’s what kept people tuning in every week.

Who’s been your favourite guest and why?

That’s a tough one! I guess it’s always been fun having James Murphy on because of the DFA connection, he’s like an older brother to me. Although he makes fun of me way too much on air. (Laughs) I also really enjoy having DJ Harvey on, he’s just really funny and a really sweet guy. Eric Duncan is another favourite of mine. There’s been so many over the years though, it's hard to keep track!

Let’s talk about your least favourite guest now. We live in Singapore and even we’ve heard of Victor from Washington Heights! When did he start calling in? What’s the deal with him?

(Laughs) I’m not sure what his deal is either to be honest. So it started when I put up the Beats In Space hotline number so I could interact with my listeners on air. And about five years ago, this guy, he calls himself Victor from Washington Heights, which is this area above Harlem, started calling in every week to criticize me. He sounded really intense and really serious.

At the beginning it was really scary because he threatened me all the time. I thought he was gonna kill me or something. I started putting the voice messages up on SoundCloud so that if I went missing, people will know that it's this guy that murdered me. (Laughs) Then those messages kind of went viral you know? People loved it! Nobody knew what to think because it's confusing as to whether he was joking or just crazy.

Has your relationship with him gotten better over time?

Yeah he’s nicer to me now, which is a little more boring actually. It got better when I decided to do an interview with him on air. We had him call in to the show live and when he finally talked to me, he became a lot less hostile. I think the interaction sort of burst his bubble and he began seeing me as a real person and not just this person on the radio. Also, I think he just wanted the attention of being on radio, and he finally got it. Now he just talks about the house parties he’s throwing and about his job on Wall Street, which, I don’t believe any of it. (Laughs)

Early on, you worked for Steinski, which must have been a pivotal moment in your career. What was your experience like working with him?

Yeah super pivotal. That was the first guy I started working for in New York. Steinski’s a real veteran of the New York scene and he’s a New Yorker through and through, so it was eye-opening working with him. The guy is just a wealth of knowledge and stories about all these old hip-hop guys and old hip-hop records, so it was amazing to learn from him. He has this huge record collection that I got to go through, and I was just eating everything up.

How did you meet him?

I went into a record shop called Other Music to buy Kid Koala’s first record and they were doing a promotion where, like, the first 10 people who bought the record would get free tickets to see him DJ at this place on Lafayette Street. I was one of the first 10, so I got to go to the show! And Steinski was the opening DJ. I went up to him afterwards and told him I was a big fan, I said “It was real great to see you play. If you need any help in the studio or just any kind of help at all, I’ll be eager to learn.” Amazingly he said okay! He told me to come in on Monday and that’s how it started.

From there you moved on to DFA. You were pretty much there from the ground floor actually. How did that happen? Were you already friends with Tim Goldsworthy and James Murphy?

Yeah I met them before the record label started. Initially they were just a production duo and they were producing bands like The Rapture. In fact The Rapture’s record on Sub Pop, Out of the Races and Onto the Tracks, was produced by them. So I hooked up with them because Luke Jenner from The Rapture was a bartender at a place called The Plant Bar, where I was DJing at, and he said I should meet his producers because he thought that we would get along. He said I should meet “Trip Hop Tim”, which was their nickname for him.

When I asked who that was, he explained it was Tim Goldsworthy from UNKLE, and I freaked out. I was like, “You have to introduce me! He’s my favourite!”, and all that. I was a huge Mo’ Wax fan. Then one night, Tim and James Murphy both came in for a party we got introduced. They were pretty wasted at the time, but they were really nice and they offered me a job. When DFA started up soon after, I came into the office and I kind of just stayed there. I never left. (Laughs) As the record label blew up, I went along with them on DJ tours and stuff. Tim and I DJed together a lot, so it was a really fun time.

Having been there since day one, can you give us an insider’s perspective on the label’s rise? Did you know it was going to become this massive, influential thing?

Not at all. I remember it started out just to push The Rapture. They were supposed to be the big thing, not LCD Soundsystem. I remember James saying that he began doing LCD just so he could open for The Rapture. The Rapture were supposed to be the next Cure. So it's crazy how things don’t turn out the way you planned because that totally flipped. Anyways, it was surreal to see DFA blow up, and blow up so fast. But the success came at a cost too. It was great until it tore relationships apart.

What do you mean?

Well Tim and James fell out over money stuff, and that kind of ruined their friendship. But overall, that whole ride was something I’d love to experience again. I was at the right place at the right time. We were a tight knit crew. Like, I remember when September 11th happened, I went to DFA to go be with them because… we were family, you know?

Special thanks to kyo for setting this up!