A lone figure stood illuminated in a pillar of dim blue light. With his features hidden in the shadows, he whipped out a harmonica and begun blowing slowly into it. A spine tingling rendition of Ennio Morricone’s ‘Man With Harmonica’ ensued and a wave of goose bumps spreaded over my arms. That man was none other than Chris Wolstenholme, better known as the bassist for the English band Muse.

Hard to believe this was the cherry on the top to the masterful concert experience that English rock trio, Muse provided on Saturday at the Indoor Stadium. Seguing seamlessly into the fan favourite anthem ‘Knights of Cydonia’, it was perhaps an unlikely but befitting closing to their third appearance here on our shore. 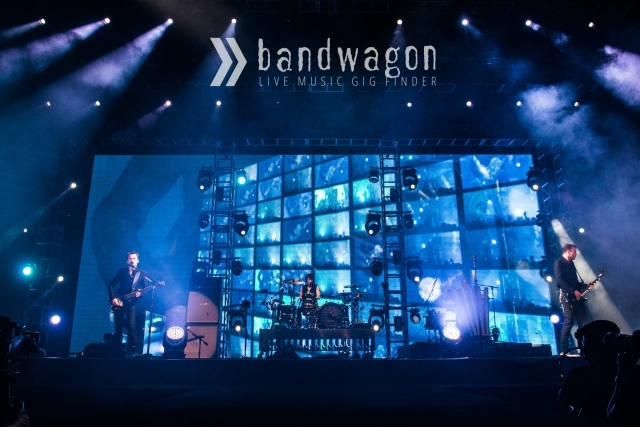 Keeping in line with the stripped down aesthetics of their latest (concept) album Drones, Muse once again proved that they didn’t need any elaborate staging or fancy 6m tall robot (named Charles) to deliver a concert that fully justified its eye raising price tag. Their raw onstage energy, a nod to the band’s hard rock roots, reminded their fans that despite all the sonic experimentation across their previous two albums (The 2nd Law and The Resistance) roaring guitar riffs, droning bass lines and pounding thunderous drum beats were all you needed if you are musicians of the highest order. Sometimes, it is really all about the simple things.

Having honed their musical narrative skills over the course of their seven-album strong discography, Matt Bellamy, Chris Wolstenholme and Dominic Howard kicked off the night with the pulsating ‘Psycho’ to rile the assembled crowd into a frenzy. The tight set list comprising of new and old favourites took punters along the dystopic storyline of a desensitised individual that Drones sets out to tell; though they chose to end their live concert on a much more optimistic note than the hauntingly jarring album namesake closing track, ‘Drones’. 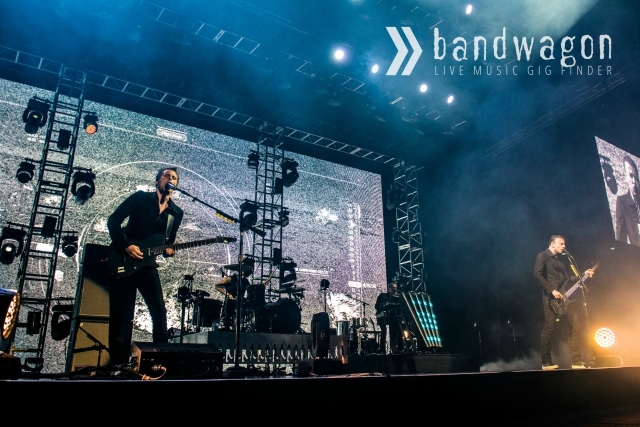 Surrounded by three huge screens, Bellamy’s nifty finger work on his guitar was not missed as the Englishman stormed through ‘Reapers’, electrifying ‘Plug In Baby’ and crowd romper ‘Hysteria’ effortlessly. There was little banter from the frontman as he devoted his absolute attention on his six stringed companion. Falling to his knees, Bellamy was clearly relishing playing his instrument and at times even distanced, though he was undoubtedly the main raconteur for the evening. 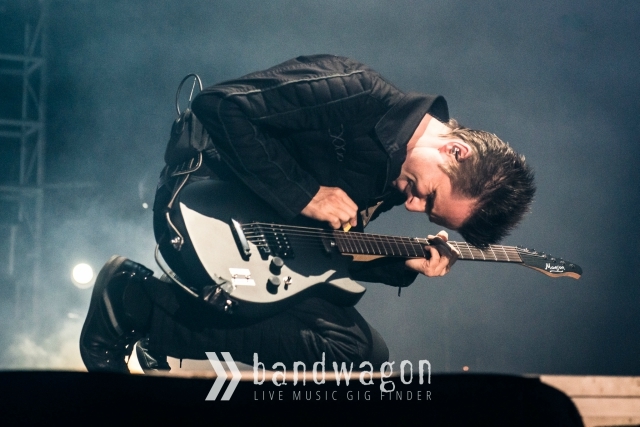 But that did not mean that his fellow band members weren’t pulling their weight. Wolstenholme, armed with his Status Kitara Doubleneck bass, really came into his own with ‘Madness’. Sure the entire stadium was captivated by Bellamy’s sorrow laced vocals that prompted a mass singalong (as well as a sea of phone lights), but it was Wolstenholme’s soulful bass that kick started the R&B inspired track. 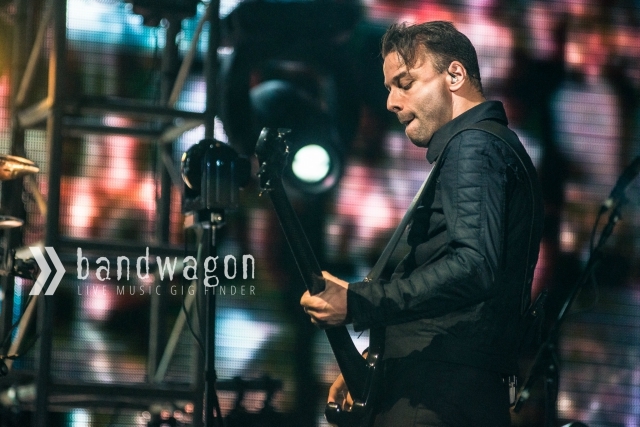 And similarly for drummer Howard who put in an industrious shift behind his kit. The 37-year kept his beats tight and taunt especially during The Resistance tracks such as the album namesake track and ‘Uprising’. His dynamic and dead on the money timing meant that Bellamy and Wolstenholme knew exactly where to jump in and were never off time. 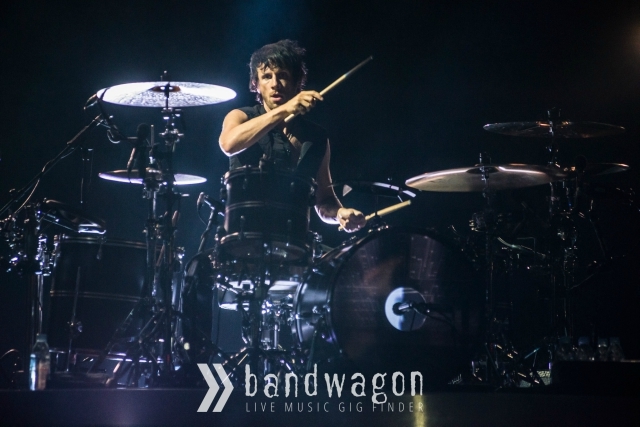 Of course, what would a Muse concert be without their signature tunes, ‘Starlight’ and ‘Supermassive Black Hole’. The fans were out in full voice and a mayhem of head bobbing and dancing followed. Surprisingly though, the two songs did lack a certain dynamic punch (or felt flat) as compared to their album versions. Well, I guess you can’t keep things turned to 11 all the time, but Muse did enough to convince me that true master musicians knew how and when exactly to be loud and take things down a notch. 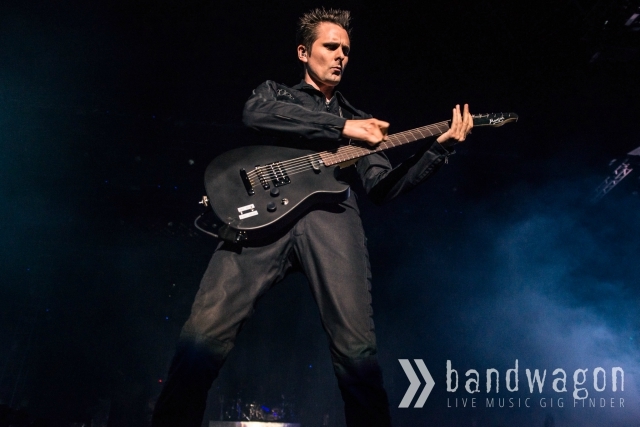 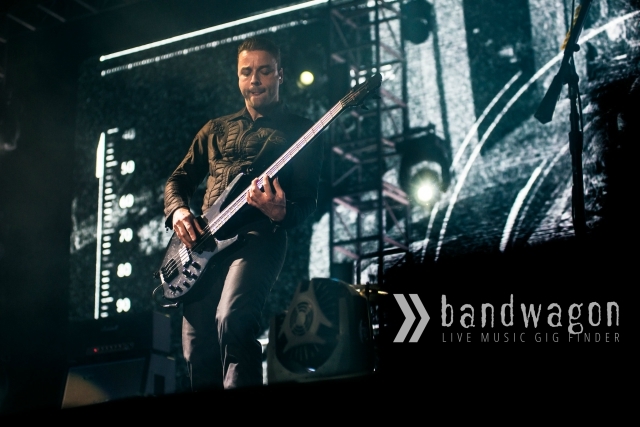 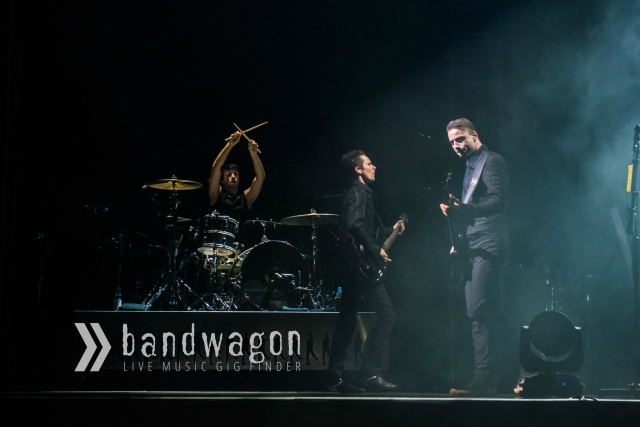 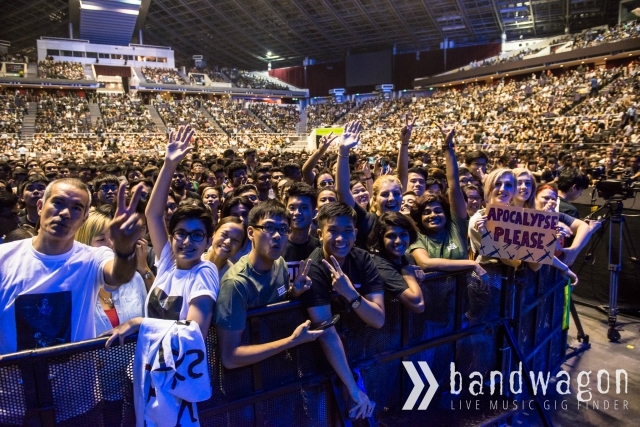