Some of the mega-names concert promoter Midas Promotions has brought in are Michael Jackson, Kanye West and Katy Perry (SINGfest), and at her peak, Avril Lavigne. Earlier this year, it was them who brought in British popstar, Jessie J, made famous by her chart-topping earworm ‘Money’. Midas Promotions has being doing this since the 80s, consistently ushering in big names into Singapore and the region – and are still around and successful. But what goes on behind this machine of consistency? Bandwagon grabbed the chance to interview the founder of the company: Michael Hosking.

The Midas mastermind invited us over to his lovely villa over at River Valley Road to talk about his humble beginning as a penniless 17-year-old British teen alone in Bahrain, his early years forming Midas Promotions and the many risks involved doing concerts – in short: it’s not an easy job.

It all started when Michael was a teenager, just shy of 16 years. After an unfortunate motorbike accident, he spent four months in the hospital, unable to walk. Understandably, he got tired of sitting around and doing nothing so he managed to find a job at a t-shirt printing company. “I went down to the Labour department and they asked ‘Can you sit?’ I said ‘Yes I can.’ So they pointed me to a t-shirt factory, where I just sat down and folded t-shirts all day long.”

Three months after he received his first paycheck, he decided to move out of his parents’ house to live on his own. “My mum and I didn’t see eye to eye so I ran away from home.” With only little belongings and 50 pounds won from Premium Bonds (the British lottery) to his name, he was all set and eager to leave. But there was one problem: he had no idea where to go. Longing for a place with sunshine and warmth, Bahrain seemed like the ideal place to go.

With the ticket price costing as much as his savings, he arrived in Bahrain without a dime and a place to live. He had no higher qualifications therefore he could only find a job as a labourer. Jokingly, he recalled “I was the only white coolie in Bahrain.”

After earning some money, he used it as capital for his first business which formed the blueprint for his current company: Midas T-Shirts. He catered to a clientele that featured visiting pop-stars, hotels, petrol and beer companies (among other clients). It was a one-man operation. Fast forward to him at 22 years old and still going strong with his business, he had a chance encounter with a manager one day while selling t-shirts at a show. He offered Michael to be a backstage hand, sorting out meals and such. With the prospect of getting a backstage pass and possible autographs, he jumped at the opportunity. It led him to work at his first concert which featured pop musician Leo Sayer. “He was the biggest star organizers could bring to Bahrain, Dubai and India in those days, twenty years ago.”

Midas T-Shirts eventually graduated into its current incarnation, Midas Promotions. For a company that promotes music concerts heavily, they didn’t start out that way. Well, not exactly anyway. The very first show they did was for the legendary pop radio deejay, Emperor Rosko. After that, they moved on to produce a show for legendary Irish comedian Dave Allen. However, things went full circle when their first music concert was for none other than Leo Sayer, the same musician whose previous concert Michael was helping out as a backstage hand.

Having done concerts for decades, Michael knows a thing or two about the many risks involved in bringing Western acts to South-East Asia. Many concert promoters usually rely on investors to raise event budgets. However, Michael stresses that Midas is private and independent. “We use our own money; we don’t borrow money from anybody. We’re not a public listed company that has funds coming in. The funds for shows come from our own pockets.” 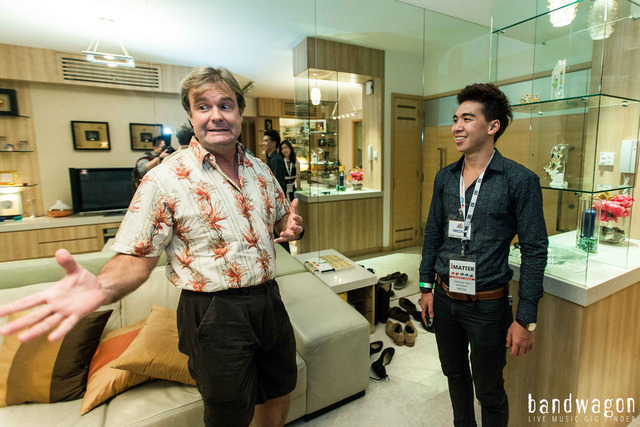 Michael shares on some elements he has learned that keeps the loyalty of some artists he works with. “We read the contract. We read the riders and we give them what they want. If we can’t, for any reason, we’ll let them know before they arrive. For example ‘We don’t have this particular brand of cranberry juice, can we use this one instead?’ It is important that they know.”

Excellent hospitality is essential. “We put them in nice hotels. We don’t have to put them Ritz-Carltons, but we do. We don’t need to put them in suites, but we do because that’s important, and then they’ll go ‘Oh God you take care of us like no one in America or Europe!’”

This has worked as some of the artists have maintained relationships with Midas whenever they come to Asia, from pop-punk band Simple Plan to Avril Lavigne. Being behind-the-scenes has got him up close and personal with many artists. He shared with us when he met Joel Madden and his kids in LA and was even there with Matt Sanders (aka M. Shadows from Avenged Sevenfold) when he learned his wife was pregnant. The little things, he shares, can please the biggest pop stars. “I’ve known (Avril Lavigne) since she was 16. One time I ordered for a bottle of limoncello to be in her dressing room because I was told by someone else that she has a song where she sang about the drink. She liked the fact that out of all the promoters in the world, we were the only ones who did that. She was like ‘Ah Limoncello! My favourite! How did you know?!’”

Rubbing shoulders with pop stars and important people frequently comes at a price. “Whenever we win, lose or draw, we treat them the same way. Some promoters when they’re losing money they will, for example, cancel the Ritz and put them in a cheaper hotel. Cancel the Mercedes and hire Toyotas. They get rid of the five-star catering and hire cheaper caterers. They’ll cut the production back. We don’t do that. If we’re in, we’re in.”

Being a music fan himself, he has been to some of the most iconic concerts in music history, some that will make the biggest concert enthusiast green with envy; Bruce Springsteen on his Born in the USA tour back in 1985 at Wembley Stadium, U2 in The Joshua Tree tour in the 1984. He also witnessed the first-ever Live Aid concert (where he sat two rows behind Prince Charles and Princess Diana) and rock band Queen’s last ever concert in Knebworth 1987. Aside from music, he occasionally coaches football and enjoys traveling.

What’s the reason behind the name ‘Midas’? Surprisingly, it does not have anything to do with the Greek tale of King Midas. Referring to his early years with his business, “One day Marlboro heard about me and asked me if I could print a thousand t-shirts. By hook or by crook, I managed to print the thousand t-shirts and I delivered them and I said ‘That’s two-thousand dollars please.’ And they said ‘Alright just send us an invoice.’” Rightfully he was confused. “I had no idea what an invoice was. I had to think of a name quickly.” Following from his first name Michael, he thought of the name ‘Midas’, and so Midas T-Shirts was born. And they say, the rest is history.