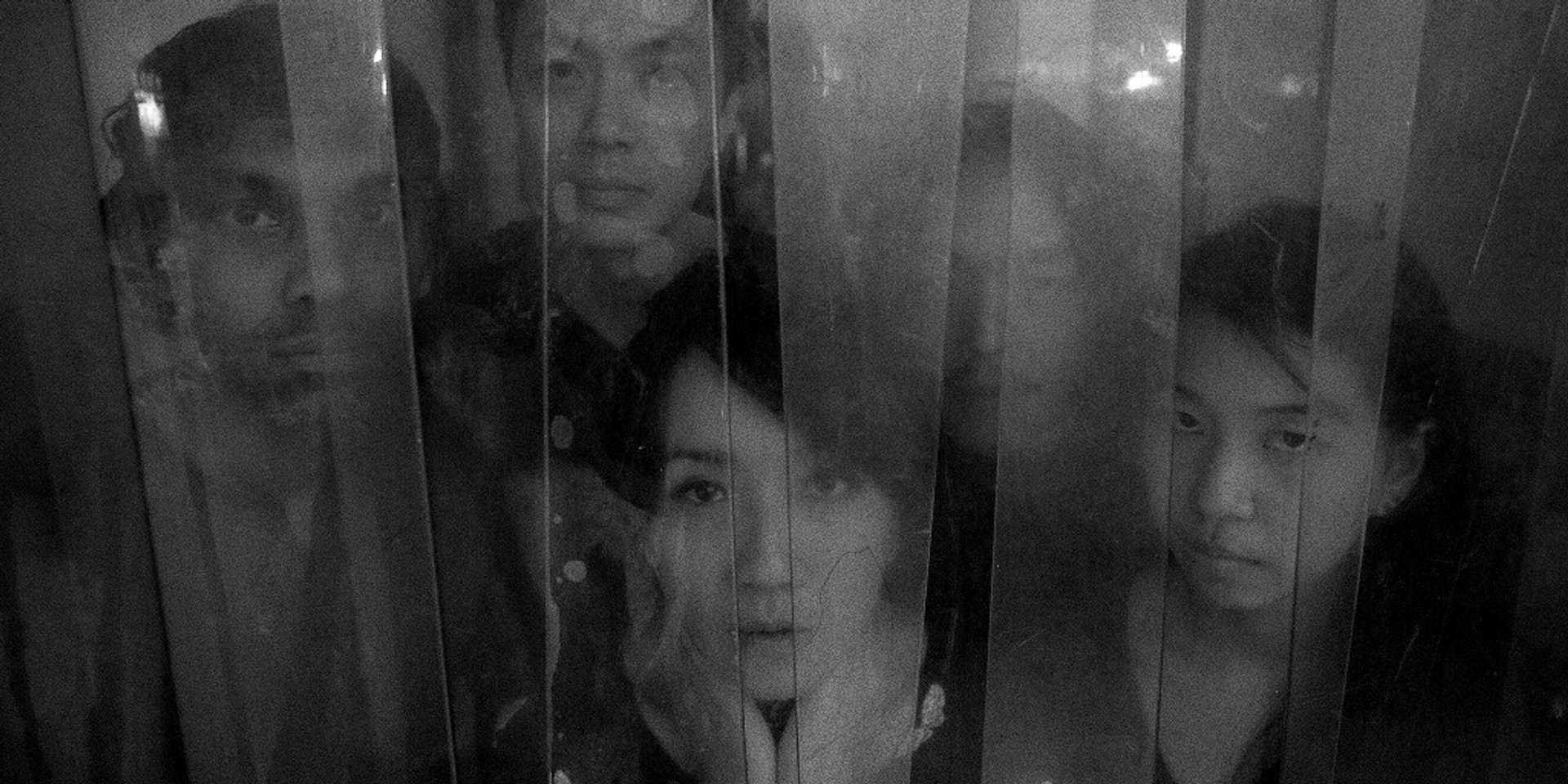 Last week, The Observatory released a new album, Shadows, which they crafted in collaboration with Norwegian band and longtime friends MoE.

Standing at three tracks just shy of 20 minutes, the album traverses dark, doomy territory (definitely not out of character for The Obs), flitting between meditative, mournful spaces and others more ragged and cathartic. Ever experimentalists, The Observatory also dabbled with Indian Carnatic rhythms or konnakol, in service of weaving a hypnotic soundscape.

Vivian Wang, Cheryl Ong and Yuen Chee Wai of The Obs talked to Bandwagon about the creation of Shadows and their working relationship with MoE – check out the interview below.

The Observatory toured Norway with MoE in 2012. You both conceived the idea for a split single on that tour, which you released in 2013. Were the seeds for Shadows planted on that tour as well?

Vivian: We met GuroSkumsnes Moe of MoE in 2011 during an in-store performance we gave at the launch of Personal Best, a music magazine started and published by Lasse Marhaug. We got on surprisingly well and found that we shared a lot in common, which led to our first joint tour in 2012. Since then, we’ve had several more tours together in Europe and Japan, and one more in Asia which included Malaysia, Vietnam, Thailand and Taiwan.

Touring together is an exceptional experience. It either goes well or terribly. In our case, we found both bands were rather complementary in planning our tours. As we were mostly doing it the old school way, that means sharing a tour van, packed to the nines with amps and instruments, and schlepping around with a shoestring budget and taking turns to drive while others provided amusement of various inclinations.

So apart from these tours being very physical an experience, we’re also thrown together for almost all of the time which involves preparing and sharing food bought from stores or late night after-show suppers cooked by fellow musicians on the bill that night, and often, sharing sleeping quarters as well. These are all circumstances fertile for developing a close camaraderie and that leads quite naturally to collaboration with little premeditation. Rather than doing a normal split single, this time, we decided to try working out creative ideas together in the same room and see what comes of that.

How was it like when The Observatory and MoE got into the studio together, and how much music did you make?

Cheryl: We sent each other some audio material before we met but there wasn’t much talk beforehand as to what we wanted to record or do musically.  If you must know, most of the communication between both bands hardly consists of our own music. I think not talking about the material extensively also created a certain kind of excitement. Each of us individually came into the studio with a sort of pre-conceived notion of what we wanted to try out / explore and were not shy to put ideas on the table.

So there was no lack of material but more of how we could streamline these ideas and execute them in the most efficient way possible. A certain immediacy was needed in this whole working process given the short time we had in the studio. This also meant having the luxury of coming up with new & crazy ideas on the spot, record it, put it together, listen to it right after and have little fights over whether to trash it or keep it, which would have been a really big challenge if we have tried to do this over Skype or emails.

It’s also quite a challenge if you think about an extended band. A lot of doubling of instruments and a lot of different characters in terms of style and sound. We wanted everyone’s musical character to be heard in the record, so it was good that we were familiar with each other’s sound and ultimately the songs gave space to everyone’s sound and ideas. Thus, we had to decide on not calling it a split album but more of a collaborative one.

The album was recorded in both Singapore and Oslo. What was it like splitting the process between both countries?

Chee Wai: This collaborative process was something we had not exactly tried and tested before. First we had some ideas that we worked on independently, then recorded down and edited to form. Before we had set the date to meet in the studio together in Singapore, we had sent our materials to each other and we rigorously thought about certain ideas to bring to the table. Because of different studio conditions and recording technicalities, we had to try to achieve a sound that makes the recording feel spatially coherent. So we did spend some time discussing technicalities and adjusting/selecting microphones to best suit our needs.

Your listeners know from Continuum that The Observatory is no stranger to gamelan music. On Shadows you also explore Indian Carnatic rhythms, or konnakol. Where did the idea to explore that come from?

Cheryl: The last year The Obs kind of went into our solipsistic caves – to recalibrate but also to learn and gain inspiration for new material. With the release of Continuum, we have been attempting to correct the oversight of not discovering music from this region thus it was really a continuation of learning and experimenting with music and art forms found within our backyard.

The complex rhythmic language of Indian music have always fascinated us so it was a natural step to take when we decided to embark on learning a little more about music that we have been subconsciously listening to but have little to zero knowledge about. It’s an ongoing process and some of the ideas of patterns and layers might have unconsciously seeped into the album.

In the materials sent along with the album, there’s allusions to play and exploration, and at the same time also mentions of the rigorous work that went into figuring out some of the musical concepts at hand and also editing the album (particularly in Vivian’s accompanying writeup). How did that mix of play and discipline ultimately shape the album?

Vivian: As with all of Obs’ past albums, we went into this one without much of a plan, other than pledging to work on material together. The idea of play and discipline isn’t so conflicting as the words suggest. Play usually means we improvise quite a bit, muck around with different musical ideas, either by expanding on a direction that’s been established or running up against it to see if something clashing or different will yield a more interesting result. There are eight of us on this album, so inevitably there’s always going to be different personalities pulling and pushing, creating more tension or more harmony.

So the “discipline” part comes when we have to decide what to keep and what to discard, what to push to the foreground, and what to preserve that doesn’t need to be quite as obvious but is absolutely essential to the feel and momentum of the song. For instance, in 'The Dreamtime', the gamelan instruments don’t feature super prominently but they cast a deep, tranquilizing spell over the song. Rather than flog the ethnic horse, we succeeded in making the song convincing, which was more our goal in marrying heavy noise rock and gamelan.

'No Ground Surrounds You' had so many intricate parts it took days to edit, arrange and make it more seamless, less cluttered. Actually, the song was lengthier but Lasse Marhaug, who mixed our album, made an executive decision to lop off a big chunk, which made it much more succinct in the end. There were some rather weird experiments we recorded, and perhaps you’ll hear it too, like the squeezing of green limes on one of the tracks.

How did the darkness/light in the world – perhaps in the world of politics, given the upheaval in the US and Europe – inform the way you both conceived Shadows?

Chee Wai: It has come to a stage where we don't need to inform the way we make art. It just becomes a natural impulse to what and where we are now, in the null of the moment. While there is much disdain of the situation of the world currently, but many times, we need to look within ourselves, our own shadows, for change, for answers. It is more a conversation between Zarathustra and his shadow that innately brought this recording to light, hence our allusion to ideas like wayangkulit, instincts and illusions. We are living in the dark ages, aren't we?

Stream Shadows by The Observatory and MoE below, and buy the digital album on Bandcamp: