When Foals announced that they'll be playing in KL, the Bandwagon editors were in a frenzy and immediately jumped on the opportunity to head out of town again to catch them. Everything settled, our hearts and minds were at peace that we were going to see them again but in KL Live, a great venue where we once watched a great band called Godspeed You! Black Emperor. And then much, much, much later on Symmetry Entertainment confirmed that the Oxford lads would be making a stop to Singapore. The Silverlake Festival with Nine Inch Nails, Foals, Taking Back Sunday, The Hives and The Used in Pattaya was cancelled and Foals suddenly had a day off in Asia. Or not.

We love Foals. From the manic math-rock that was Antidotes to their decidedly dark direction for Holy Fire, we love them. We had passes to cover the show in KL but it is our duty to be on every music event in Singapore (plug), so it was a simple decision, really: we decided to attend both shows.

In Singapore, we had our correspondent Daniel Peters to be part of the festivities at the Hard Rock Coliseum, and over up north in the city of Kuala Lumpur, both Bandwagon editors would be at KL Live with Yannis and Co. Safe to say, both shows revolved around the following adjectives: mad, crazy, awesome, rowdy, loud - you get the idea.

Post rockshow and back to basecamp Singapore, Daniel and I go head to head on both shows - the madness, the songs, the moment I had upset Daniel with a text message after Foals in KL and over chicken wings (Wong Ah Wah forever), and the experience. Co-editor Ilyas Sholihyn does a good job as a moderator. Or not. 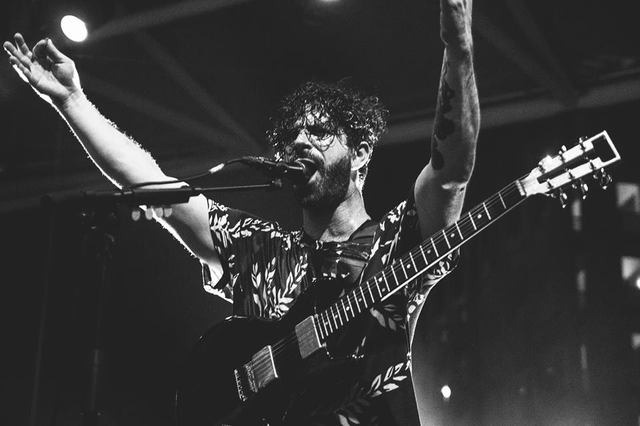 Ilyas: So we have here our first ever Bandwagon podcast (what was intended but because of knowledge limitations, we were unable to)! And for the first issue, we're gonna talk about Foals, so what do you guys think about Foals?

Daniel: I guess they're all right...

Del: So far it's the best gig we've been to this year.

Dan: Uh, no. Mine is still The National. But this is really close.

I: Interesting you'd say that - why?

Dan: For me, as a band they mean more to me than Foals. So that's why it's still better. But in terms of stage presence, coupled with the crowd participation, then Foals would've played the best show. Everyone was really crazy.

Del: That's why I thought it was the best show I've been to. If you put aside all bias, it was a really exciting gig - it was the most excited I have been at a gig.

I: So let's start this, Daniel how was the show in Singapore?

Dan: They held it at the Coliseum, there are a lot of gigs being held there but most of them are on the heavier side; I saw Coheed and Cambria, Circa Survive, and Deftones play there. For Foals, the reception was all right - 3/4 of the venue was filled up, considering that the gig was announced pretty last minute, nobody's fault really. Due to the riots in Thailand, Silverlake had to be cancelled and that freed up Foals for Symmetry to bring them in.

I was there at 5pm where there were a lot of people queuing up already, but I still found my way to the front. There was a girl, she got so excited that she puked. She didn't seem very drunk, and her friend was holding her hair back, security went up to her and they were pissed.

I: In comparison to the Singapore show, Foals played at KL Live where we saw Godspeed, probably the most sonic-heavy band we have seen. 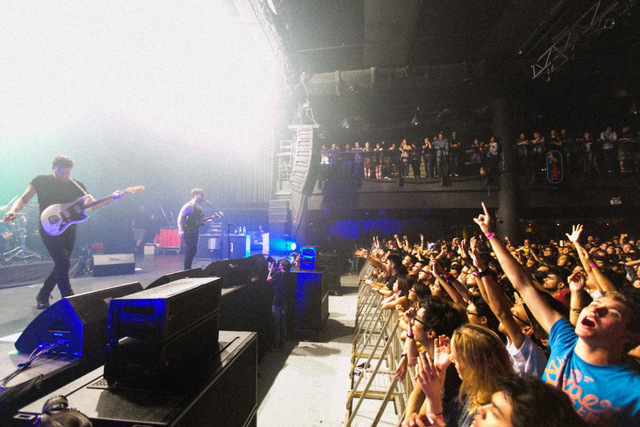 I: So how was the show in KL, Delfina?

Del: Aw man, it's was very surprising and refreshing. We've been to so many indie gigs in Singapore but we've never seen this sort of madness happening at an indie gig in Singapore.

Del: Two circle pits happening at the same time that eventually merged, and then everyone on the floor joining in, a couple of GoPro on sticks, water splashing everywhere, this tudung girl next to me who was jumping around as well, and then after that she was smoking. Everyone was so rowdy... and happy! Pretty soon it was Yannis and friends making music onstage and another party going on, on the floor. It was 10 times more amplified than any other gig I've been to in Singapore. You can get a good crowd on good days, but it has never been mad.

Dan: Before hearing about how crazy the crowd was in KL, the Singapore crowd was pretty crazy for a guy who has had his share of metal gigs. Deftones has the craziest crowds I've seen, Korn also had a pretty mean moshpit. But I have to say for Foals, where I was standing, it was crazy but not so much for the rest of the venue. Still, not bad considering I had no expectations when it came to the crowd. For the band, I was expecting a lot from them especially after Laneway in 2011. The Laneway crowd were too chill, just relax relax only, no one was really moving so this was a nice change. But sometimes some of these people don't really know how to mosh, they just push each other and that's it. You know, Yannis wanted to crowdsurf during 'Providence' but he went to the wrong area - he went to a zone with 13-14 year old Caucasian girls and other female Singaporeans. When he crowdsurfed on them, everyone collapsed.

I: What about openers, let's talk about the openers.

Dan: There was actually an opener for Singapore, it was this guy who was backstage most of time. He was playing John Cage's 4'33".

Dan: His work was mostly silent.

Del: You don't have to lie.

I: So essentially, there wasn't an opener. Action sia this guy. Well anyway, we had two opening acts, one was Robotron 5000, half of electronic duo Dangerdisko, and our very own MONSTER CAT. 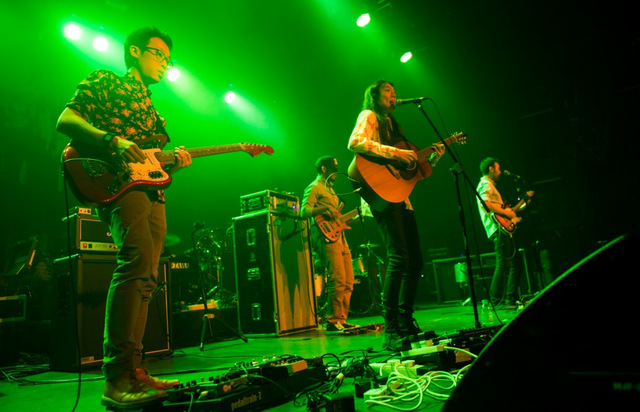 Del: Robotron just put together a playlist of electronic-ish songs, oh and Dan you'd be upset.

Dan: Nooooooo, of which song?

Del: Yeah I remember telling Ilyas that you'd be upset.

I: It was like Au Revoir Simone covering Smashing Pumpkins.

Dan: Who is Au Revoir Simone?

Del: It's good you don't know. Anyway there was a cover of Eleanor Rigby also... but moving on, let's talk about Monster Cat - they were great.

I: I felt a bit nervous for them, playing to a Malaysian crowd. They started off with the latest track 'Take Me To Love' with some sound issues but after... 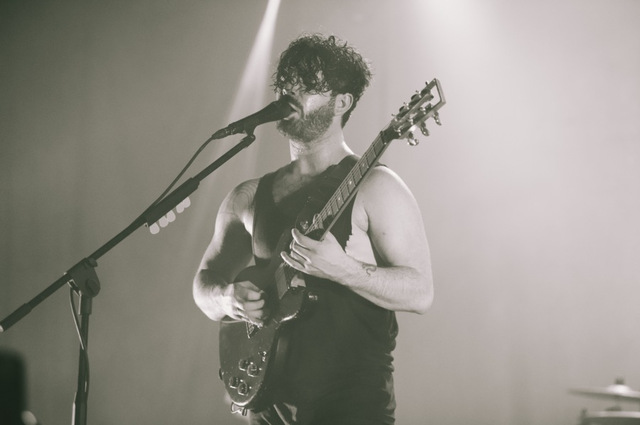 I: And when Foals came on?

Del: It went berserk. Thing is, KL Live is an air-conditioned venue. But after two songs, we were all sweating buckets. We were also covered in sweat of other people. I smelled like a strange stranger when I got back from the gig. I smelled like the guy in front of me specifically. It was kinda gross. I myself started jumping up and down and shouting lyrics, especially during 'Red Socks Pugie'.

I: I remember there was someone splashing champagne over the crowd during the show.

Del: What about the Muslims.

I: That's considerate of you.

I: Now let's talk about setlists.

Del: Ohhhh what song didn't they play in Singapore JYEAH.

Dan: Before I let Del rub it in my face, NO THEY DID NOT PLAY 'BALLOONS' IN SINGAPORE but it was the same setlist. Just no 'Balloons'. 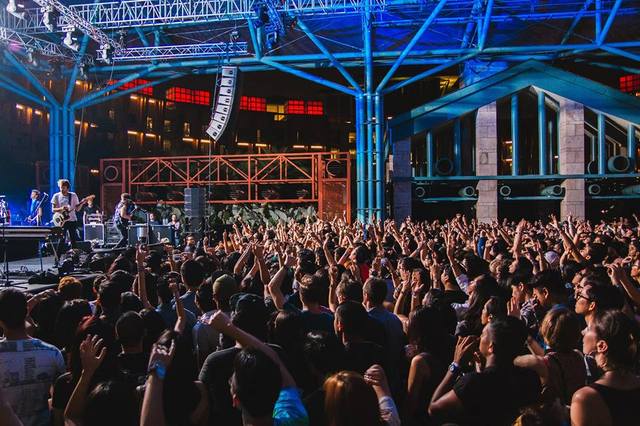 Del: Yeahhh. But honestly I think the setlist was pretty well curated, they had quite a good mix of songs from all their older albums and the best of their new album.

Dan: Considering how all their albums sound so different, they did a good job including the best from each. Although I was surprised that they didn't play so much from Total Life Forever. They've improved so much since Laneway, I think at this point in their career, they've mastered their craft.

I: Let's talk about Yannis.

Del: He's an excellent frontman, his showmanship is impeccable. I guess there's a reason why they won 'Best Live Act' before. I don't think I looked at anyone else onstage when Foals were playing. He does that, he commands your attention. I remember at Hostess, when Matt Berninger was somewhere taking a stroll with the crowd, the Dessner brothers were holding their own onstage so even when I was rubbing Matt's shin or something, I was still looking at the Dessners. But for Foals, it was all 'oh man Yannis is fascinating', my eyes were fixed on him. 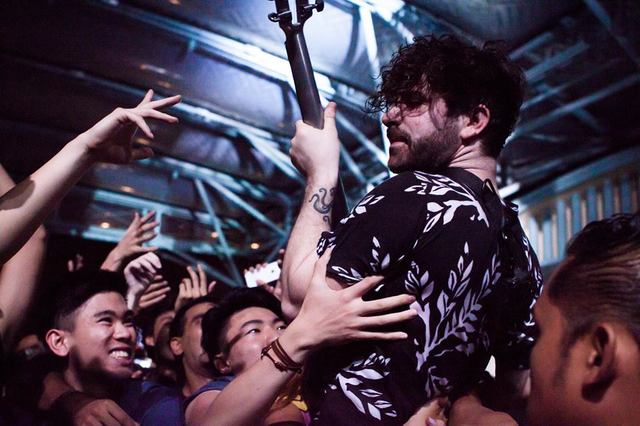 Dan: In Singapore, Yannis also got an audience member to play the guitar with him, and I didn't hear anything shitty so the guy must've played well. It's a nice change I guess because the first time they were here, he seemed quite grumpy and standoffish. But this time he seemed genuinely happy to be with people and interacting with them. Also, he plays the guitar as well as handles vocals, and he's even a very good guitarist technically, which made me respect him more. But all of them are really, they have good songs and the technical chops to proof it, they're no cookie cutter indie band kinda thing.

I: I like that for their live performances, they have extended outros. There was a song, somewhere around the fifth song where the outro was almost post-rockish. There's the best part about Foals, that when they jam they really show their technical chops. And the outro to 'Red Socks Pugie'.... best giler.

Ok so, final question: which gig was really better?

Dan: I guess, in the end it doesn't matter.

Del: In the end everyone had a good time, the band had a good time. It was win-win. Although KL would have the winning point with MONSTER CAT opening. And the whole 'going out of town to catch a gig'.

Dan: Besides the fact that KL had the longer setlist by one song, and the opening act, everyone saw Foals and everyone was happy.

I: I'd take ticket prices as a factor. Definitely cheaper in Malaysia.

Dan: Really? No lah, same what. Wait I have currency converter.