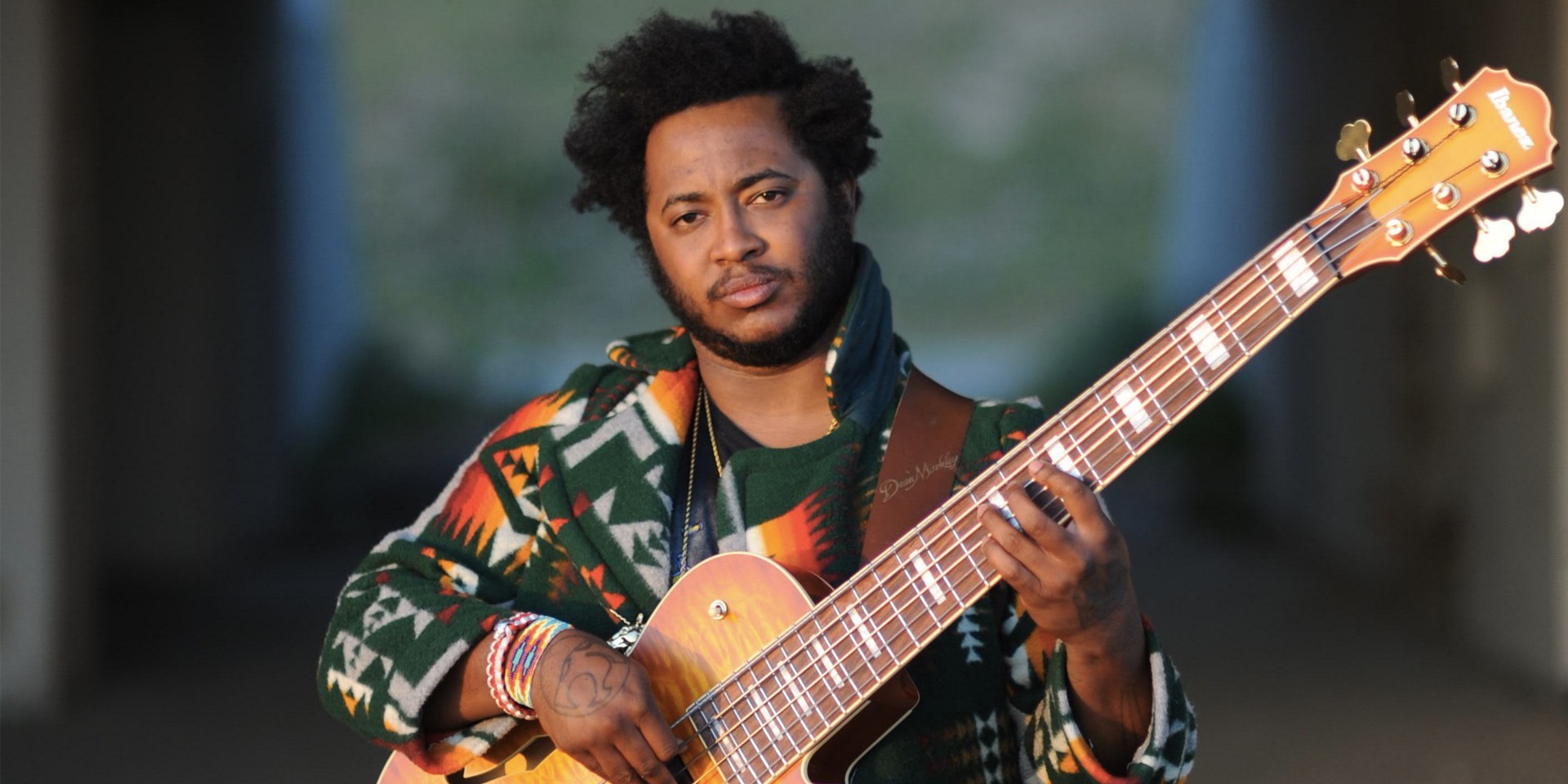 The reception was horrible.

I had to repeat myself and there was a discernible silence that felt very much uncomfortable, no doubt caused by my inability to properly discern the voice on the other side of the line. I proceeded with my first question: "You've managed to feature on some of the most prominent albums in the past year. How do you even keep up?" And there it was: a burst of laughter.

That alone encapsulates the anomalous, carefree spirit of Thundercat, real name Stephen Bruner. It also broke through the awkwardness so unexpectedly that I was put at ease, fuzzy reception be damned. “I don’t know,” Bruner shrugs. “I just try to stay inspired with all my friends, who make some really great music which usually involves me.”

For a musician like Thundercat, he's risen from a faceless session musician to an incredibly singular and forward-thinking figure with his own body of work. Music has always had a massive presence in his life since birth — his father played drums for The Temptations and Diana Ross, while his older brother followed suit. Stephen instead took an early liking towards the bass guitar, but made a quick sidestep with a brief stint in German boyband No Curfew, before performing as touring sideman for successful acts like Snoop Dogg, Erykah Badu and even punk/thrash act Suicidal Tendencies.

Thundercat has made three acclaimed albums so far: his self-assured debut The Golden Age of Apocalypse, the eccentric Apocalypse and this year’s atmospherically cosmic The Beyond/Where the Giants Roam. His recent appearances in several acclaimed records, however, has boosted the bassist’s profile considerably. Being a close friend and frequent collaborator of producer Flying Lotus, arguably a demigod in the field of modern beat music, he’s also been able to work with other like-minded artists, who he feels have elevated him to where he is right now. The most recognizable one is rapper Kendrick Lamar.

Pushing out what could be one of the most impactful and extraordinary hip-hop albums of the past decade, To Pimp a Butterfly, Lamar masterfully crafted his frustration towards black injustice alongside autobiographical stories of dealing with fame and addiction, depression, insecurity — all performed with an ingenious musical palette that spanned Parliament-era funk, 60s soul, 90s R&B and jazz. Bruner was one of many esteemed individuals involved in the album’s production, and has a lot to thank Lamar for how he approaches music now. 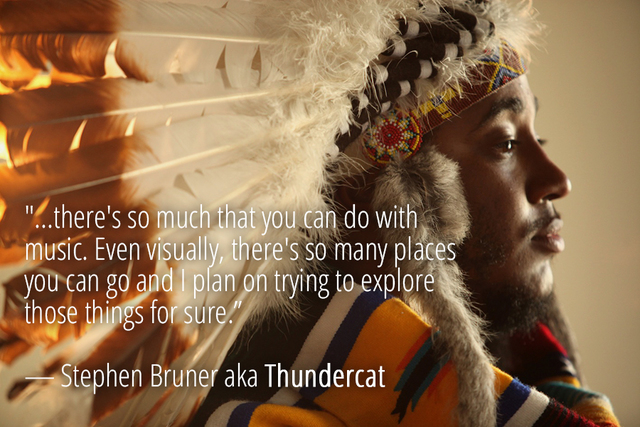 The sprawling list of musicians who’ve hired Thundercat in the past, considered him as a capable bassist rather than an artist with valuable input. He feels with Lamar, it was the first time an outside collaborator managed to push him artistically.

“He could pull ideas out of me, and could actually stretch the boundaries of what I would normally produce,” says Bruner. “With Flying Lotus, you gotta be really straightforward with your music, where it has to be honest and ‘you’. Kendrick really pushed me past the point of like “this is what you do" and "this is how you do it”, so to speak.”

To Pimp A Butterfly made headlines for a good portion of 2015, and it also made Thundercat a talking point. After significant exposure with Flying Lotus and his Brainfeeder label, this boosted the bassist to an even higher platform to showcase his works, releasing The Beyond/Where the Giant Roams in June. But the added publicity did take a toll on Bruner after a while.

He explains, “Sometimes I can feel like “I’m not ready to tour" *laughs*. It does get overwhelming and that's why I play video games as much as I can.” He still makes it a point to not let it affect his work ethic. If anything, he’s working even harder in his career, which now includes a spot on Laneway Festival’s 2016 lineup. “I just finished the American part of the tour, and I'll be doing the European part of the tour soon,” states Bruner. “And I absolutely plan on being on tour for a little while more. I’m just going out doing shows and making records.”

Even as he steadfastly continues his project as Thundercat, he’s also doing his best managing other collaborations, the most recent being the three-hour jazz opus The Epic by saxophonist Kamasi Washington.

“As Thundercat, it's like I have to create more, but at the same time,  there's more people who want to approach me and because I am very approachable, it happens at very high volumes *laughs*,” says Bruner. “People just walk up to me and hand me CDs, demanding like "you need to be on my album" and I'm just like "nah" *laughs*. That doesn't necessarily work but I try not to get too mad at people doing that all the time, you know?”

Thundercat’s image has always been idiosyncratic — his feather headdress almost becoming as iconic as his name, borrowed from a certain beloved 80s cartoon — and his wild, almost scrutinizing attitude towards modern music has allowed him to flawlessly perform various styles, whether if it’s 90s hip-hop or thrash metal, while still fixated on his jazz-inflicted work. 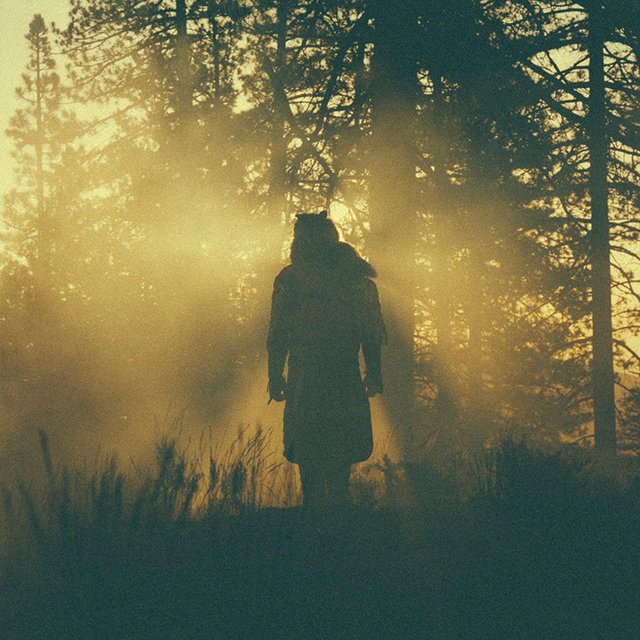 The album cover of Thundercat's latest work, The Beyond/Where the Giants Roam.

His appearance on The Epic is his most jazz-centric participation to date, with the album, due in part to Kamasi’s association with Brainfeeder and To Pimp a Butterfly, covered by several non-jazz music outlets and is in the running for one of 2015’s best overall albums. “I see jazz becoming a big part of pop culture again in a major way,” predicts Bruner. “It's gonna be cool to be hip *laughs*.”

Even with 2015 presenting new pathways of opportunities for the bassist, Bruner knows not to fall into the hype trap and keeps his mind focused on moving forward on his own terms. “I will be making music till I die,” Bruner says. “I definitely see other things happening because there's so much that you can do with music. Even visually, there's so many places you can go and I plan on trying to explore those things for sure.” 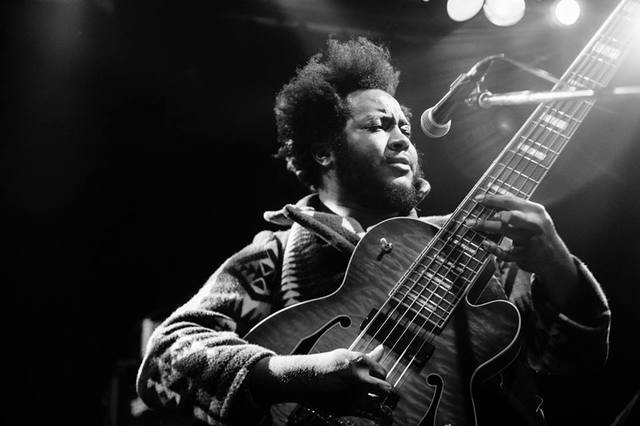 Bruner is currently brainstorming ideas for WOKE, an audio/visual project with Flying Lotus and experimental hip-hop duo Shabazz Palaces, while working on new music with legendary jazz figure Herbie Hancock. The pianist attributes Thundercat’s work as part of “a scene that's happening, kind of an underground movement that's given partially to a connection to jazz or a new form of jazz.”

Prior to the announcement, Thundercat had never heard much about Laneway, but he’s now looking forward to the tour, especially since his younger brother Jameel Bruner is handling keyboards for The Internet, who have also been slated to perform on the tour. “I hope I have a bit of time so I can hang out and meet some of the other artists,” says Bruner. “I especially can't wait to get to Singapore. This is my first time in Singapore so I hope to have a really good time. I just hope to express the best music I can while I'm there.”

Thundercat is slated to perform at Laneway Festival Singapore 2016. Find out more info and buy tickets to the festival here.