The idea of touring can present either a bouquet of rose-tinted opportunities or sweat-inducing nightmares of laborious journeys for little pay.

It’s a reality many musicians will have to face in order to continue their creative pursuits — in the face of constantly-changing technology, live music remains the ultimate constant in an abated music industry.

Even as album revenue streams are dwindling, musicians are still able to make a decent amount of money from performing around the world. It’s where you perform that matters, learning from Singaporean musician Nicholas Chim, who recently embarked on tours that covered Hong Kong and Germany. Here's what he has to say.

It’s been said that touring is the one income stream that musicians can still depend on to make a living. Even so, it’s still rare to see Singaporean musicians take their music abroad — aside from landing a slot at an international music festival, thanks to requirements to receive funding from the National Arts Council, among other obstacles.

With homegrown independent music bursting at the seams — in terms of releases and shows — this year, it’s about time we take advantage of our much envied passport and show the world what Singaporean musicians have to offer.

It might seem daunting to take your music beyond this island but if done right, touring will reap larger benefits for your music in the long term. I want to share my knowledge with you, in the hope that this would inspire you to go on the road.

After all, you could just make it on YouTube right?

It can look like the more viable route to take to be discovered overnight, rather than deal with planning overseas logistics for five bandmates and their gear. Though it is true that YouTube has been a critical part of some musicians’ success, you can’t guarantee that it will achieve the same results for you.

Having worked in the industry side of things, I can say that there are at least a hundred releases going live on iTunes everyday. Unless your song is that universally special (e.g. Gangnam Style), that release you poured your heart into is just going to add to the noise.

Even an exceptional release is only going to be buzzing in any town for two weeks at most, so most bands don’t know what to do once they’ve exhausted their local community. If you feel that album deserves to be heard by as many people as possible, it’s time you put in the hard work and bring your music directly to a new group of people.

That’s what touring does for your music. People who’ve never heard of your band are being directly exposed to your music. By the end of your first song, they’ve decided about buying a copy of your album or not. They might go online to check out your YouTube channel and Facebook Page. There you go, brand new fans! If there’s a tepid response, it’s probably because the audience couldn’t relate to your music. You need to do much more research and practice your live set until it’s almost perfect.

It’s important to define these as soon as you decide to tour.

Something vague like “I just want to get my music out there” won’t do. Anyone who plays music has that feeling. Lacking well defined goals causes you to lose focus and the tour would end up a very expensive “working” holiday. 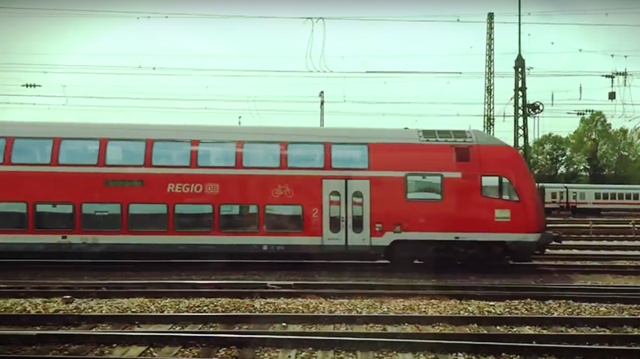 If this is your first tour, you will have to consider it as part of your marketing budget. That means you’re going to lose money during the first couple of times. My advice is to keep these trips as cheap and short as possible. A week-long trip is more than enough to start with. You don’t want the huge loss to outweigh anything good on tour.

Flights make up the bulk of touring costs, so have someone more experienced in booking flights help you if possible. My travel agent managed to get us cheaper flights to Japan by booking several months in advance. I saved several hundred dollars by doing an overnight layover in Dubai en route to Germany.

There’s no need to starve but you should try to keep the fine dining to a minimum. Salaryman diners, food stalls at train stations and street food offer affordable yet decent options for sustenance. I was surprised that a couple of onigiri from Lawson’s in the morning was enough to keep me going till after soundcheck! 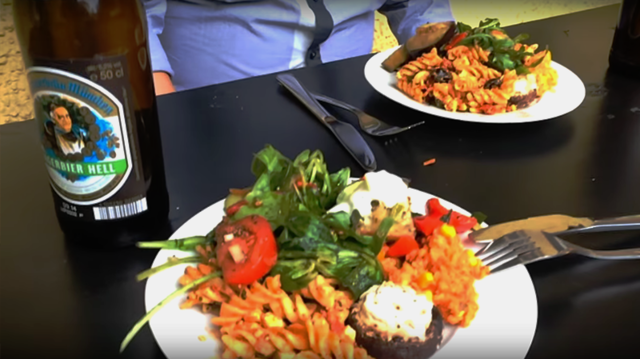 Of course, if you can afford it, by all means...

For the more seasoned, you’ll be leaning towards making profit and expanding your followers base on social media. Be as specific as possible because that will determine your actions at the shows.

For example, if your main priority is to sell as many CDs as possible, one thing you can do is spend time talking to everyone after your show. If people discover that you’re a great person who also writes great songs, they’d be more inclined to buy your CD. People generally hang around after a show for 30 minutes at most, so you have to move around a lot! You really have nothing to lose, so move past your insecurities and social awkwardness by staying focused on your goals.

The different people you’ll meet on your tour will not only enrich your worldview but it may just earn you fans along the way.

"Music is about people connecting in a very pure way and the business aspect should never interfere with that."

You can take on the whole world but you need to pick your battles. Thanks to the internet, it’s easy to decide which countries would most likely prefer your style. You also need to find important information such as the currency difference, hospitality deals, the size of your target demographic before deciding you want to break into that market.

It’s best to work with someone who knows the ground well. Try to identify local bookers and gig organisers, contact them through Facebook and email, offer them something of value in return for helping you.

Sometimes this falls through and you might then feel like booking venues on your own. This is very risky and I wouldn’t recommend this. In 2011 I’ve turned up to a venue in Melbourne, where the owner had completely forgotten about me and booked another band to play that night instead. Imagine how embarrassed I was in front of my friends who came out to see me!

Call me obsessive, but you need to plan for every contingency that could ever happen. Preparation before your tour ensures that only an Act of God can cripple your performance.

As a personal rule, I have almost whatever I need to perform in my carry on baggage. I’m usually anxious until my guitar is safely back with me.

Music shops aren’t exactly easy to find in larger cities, so make sure to bring extra guitar strings, batteries, cables etc. If you run backing tracks off your laptop, bring a backup hard drive. Keep your tech rider as lean as possible.

Plan your shows closely with your booker so that routes from one destination to the next make sense. When possible, buy a month long pass so you can travel with more ease. 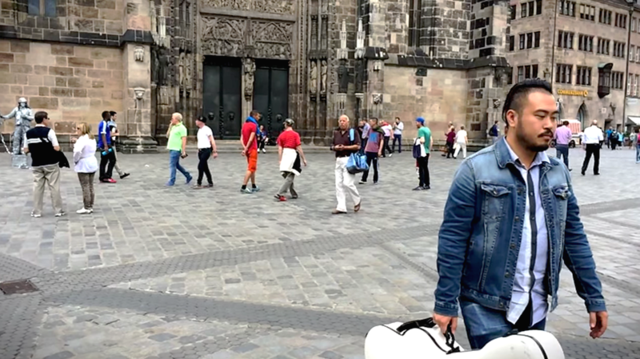 Try to squeeze in a bit of sight-seeing too.

If you’re still not convinced, here’s a short list of things that happened to me:

In Japan, two of our three voltage converters blew. I also didn’t get data roaming for my phone so we constantly got lost. In Hong Kong, we had to take two cabs for every show because we stayed too far from the venues. That cost us (6 people) a fair amount of dim sum money.

In Germany, we got lost travelling to a host’s house to sleep for the night. It was raining as well. All because we got complacent and got off at the wrong train station!

It really is true: touring isn’t as glamorous as it sounds. Unless you have a good host, there will be lots of waiting around until it’s time to perform. Continuous weeks of traveling, late nights, sleeping on couches can incite cabin fever even amongst the best of friends. Specific dietary requirements and other special needs of bandmates can make logistics an even bigger ordeal than it already is.

The best way to beat cabin fever is to keep communication between every member open. If everyone feels safe to speak their honest opinion, I find it hard to imagine any frustration building up. It’s important to establish that discussions need to stay objective and should only contribute to making the tour better for everyone.

Be mindful when you see your team start to lose their patience. Making effort to make them more comfortable will go a long way. Happy team members means better vibes when you perform together.

Here are some things you can do:

"Don’t be afraid to dream a little bigger for your music."

No matter how much you prepare, you’ll never get touring right the first time. You’ll still be making mistakes on the tenth time. Mistakes happen because every tour is inherently different.

There will be so many factors out of your control but that’s what makes touring an exciting adventure. Learn to take it on the chin, be ready to improvise in any given situation and let life happen. 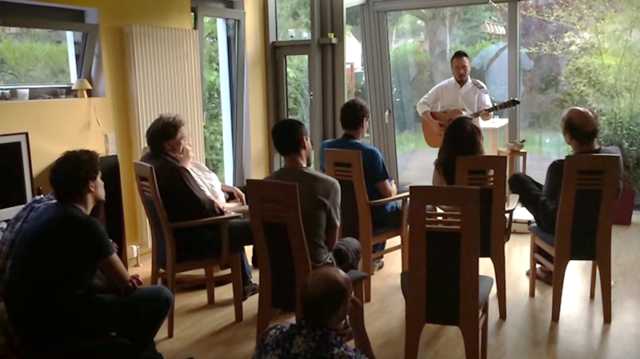 For example, we missed our connecting train to Frankfurt. The old me would be panicking and need at least some time to calm down. Instead, I quickly used the local public transport app on my phone and found us another train to take us to the airport. It was old and slower, but at least we didn’t miss our flight home!

Time spent on the road, playing your songs thousands of times over, will show itself in your performance. Trust me, a seasoned professional act is very attractive to bookers. Once you put in time getting out there, everything else you’ve been hoping to happen for your music probably will.

It would be a waste to put in that effort for a successful tour and only go to that country once. If there is potential for you in that market, you should commit to play there at least once a year.

Each time you go, aim to build long-lasting and authentic relationships. Not just with people associated with their local scene, but anyone who expresses a connection with the music. You never know who can help you, but people will only do so if you have been real to them.

I realised that my tours in Hong Kong and Germany happened after I had done something kind without expecting anything in return. Music is about people connecting in a very pure way and the business aspect should never interfere with that. People might forget how you sounded that night but they won’t forget how you made them feel.

Many times, we give ourselves reasons to not go on tour. I’ve been guilty of that myself.

If there’s one piece of advice to impart, it's this: If you want something in life, you have to work hard and make it happen for yourself. Don’t wait for things to happen. Of course, you can just get Shia Labeouf to scream that to you anytime if you need it.

Don’t wait to land a festival slot before you finally get to play outside of the island. Don’t be afraid to dream a little bigger for your music. Working a little harder can make the difference. It did for me.

You can find Nicholas Chim on his official site and in the studio, where he's busy recording his next EP. He also plans to tour again very soon.