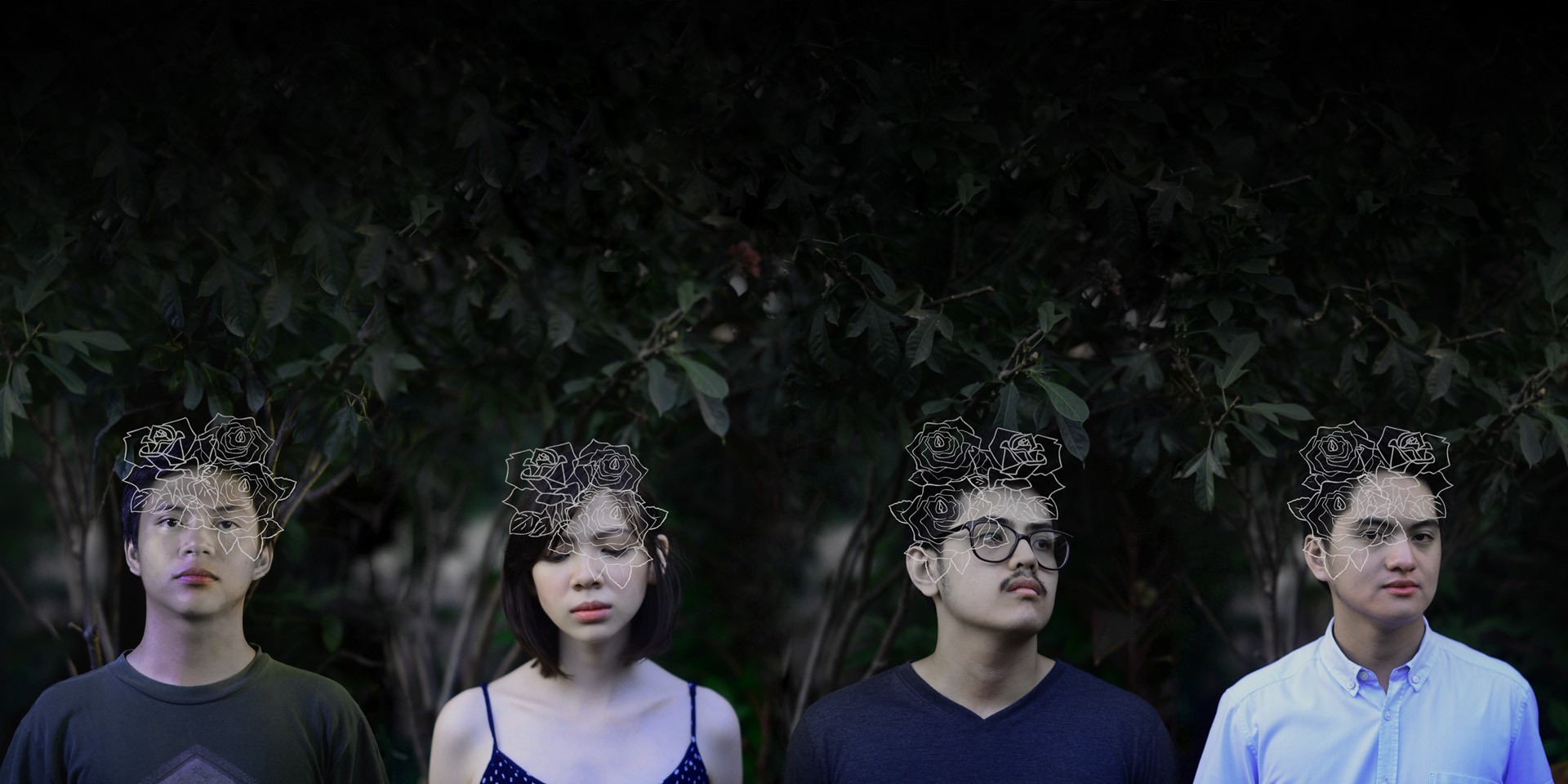 Earlier this year, we named math-folk quartet Fools and Foes one of Bandwagon’s Regional Bands to Check Out in 2015. It wasn’t in the least surprising to know that we were not alone in this sentiment. From having made it to the Top 5 of 2015’s Wanderband competition, to being named multiple times in notable lists by various online magazines, Fools and Foes have truly strummed up a storm in their freshman year.

Furthermore, if the turnout during their first EP launch was any indication, the band has also garnered themselves quite a following.

saGuijo was packed last Friday, 4 December, as fans of Fools and Foes made their way to the venue to get their hands on a physical copy of the band’s much-awaited EP, Underneath the Roots. The night was kept constantly alive by an impressive lineup of guest acts – fellow buzzing new indie artists, Austin and Run Dorothy, and emerging indie bands, Autotelic, The Ransom Collective and Ourselves the Elves.

When it was time for Fools and Foes to take the stage, however, the sheer impact this young band has made in the scene became made more apparent than ever. 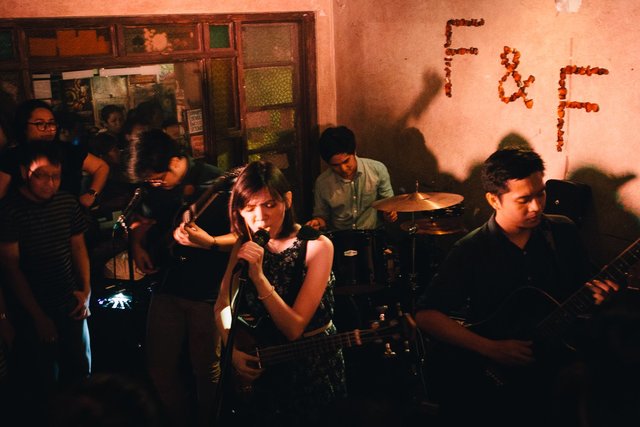 Performing all songs from the EP, plus two covers in homage to some of their biggest musical influences, Fools and Foes had saGuijo bursting at the seams with fans rocking along to their somber yet fiercely potent vibe. People were up on tables and hanging from stairs, not backing down from getting a wisp of the action. I was there and at some point had to stand far back from the rest of the crowd – it was quite a sight.

Underneath the Roots features four original compositions by Fools and Foes and a collaborative song with solo indie folk artist Happy Monday People.

Each song is meant to tell stories about childhood memories, insecurities that come along with heartbreak, fighting one’s own demons and finding one’s self. But beyond these, Fools and Foes brings their listeners on a unique musical voyage where they use each song progression to paint a scene in a story that blends into the next one with rhythmic abandon. 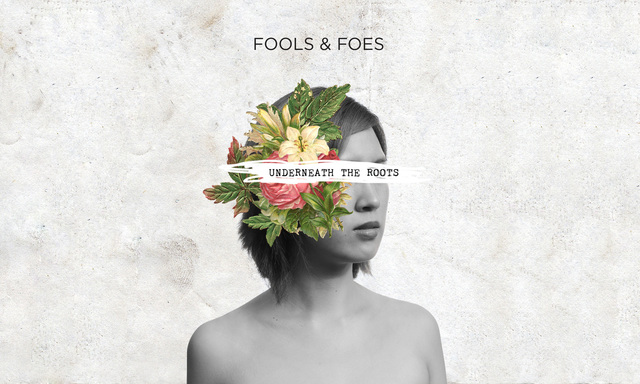 A couple of days after the launch, I had a chat with all four members of the band. Frontwoman Isabelle Romualdez (bass and vocals) said it took a while for everything to sink in for her after the event, but once it did she was truly amazed by the turnout of support they received. We then went on to discuss Underneath the Roots and each track in deeper detail. Notably, Isabelle said of all songs, “We try not to oversell any of them. We just let the music speak for itself.”

She and the boys – Miguel Querubin (guitar and vocals), Gabba Santiago (drums), and Ralph Gonzalez (guitar) – proceed to talk about the five songs; what inspired them to create each track, how they developed these further, and other interesting anecdotes from their over-a-year-long journey towards their successful release.

Stream the EP and read below.

Miguel: This was the first ever song we released, but we decided to remix and remaster it for the EP. In terms of production, I think that the initial version of Blindfolded did not bring out the best of the song. There were countless errors and could-haves (mostly on my part) with the tracking and mixing, and those were the areas which I did my best to “fix” on the EP version.

The reception towards the demo track definitely made me feel thankful and lucky that the listeners were still able to make a positive connection with the song. However, the primary reason I produce and re-produce material is to fulfill my own standards, which of course applies to Blindfolded as well. I legitimately feel frustration whenever I put out material – due to deadlines, constraints, and/or technical difficulties – that ends up not fitting my own standards.

It makes me feel like I’m an unintentional sham or a negligent producer. I can never be content with giving clients intentionally “mediocre” material. And this is not because I put myself in some high moral ground, but only because the material being pertained to is MY material as well – not the actual song, the lyrics, or the melodies; but the projection and manifestation of these elements.  So in the end I do this for my own face, not anyone else’s, for in this game I am an artist and not an entrepreneur.

Isabelle: Furthermore, we recorded Blindfolded a year apart from the other tracks, so you can slightly tell the growth of the band if you listen well enough.

Isabelle: This has been such a good song for sound check, especially since it’s the only song with a very different tuning. Ralph uses a different guitar for this song, so that also makes it practical. We started out using this as an instrumental intro to Red Face (when we used to cover it), but then we liked it so much, we decided to make it a full song.

Since the instruments are already busy and complicated, I wanted the vocals to be short and simple. Ralph was the one who started the riff and basically made the “intro” skeleton. I think the main star of this song is the guitar riff, that’s why I didn't want my vocals to get in the way of that. I felt like the two lines / short lyrics complement the simplicity of the vocals. Two lines, but two painful lines.

Ralph: I used to listen to a lot of Mock Orange and American Football while heading out to my first few jams with the band, which influenced the intro riff of For the Night and the rest of my riffs for the song.

Isabelle: Migs’s idea for this was to start out with slower strumming in the chorus, then move on to a more rapid strumming. We thought it would be weird to continue singing a chorus when it came to the rapid strumming part, which is why we decided to put in gang vocals (the now-popular “HEY!”) to add more flavour and fun to it.

Also, the title of the EP came from this song. When we were thinking of a title for our EP last year, we only had two songs to choose lines from – Undesired and Blindfolded. We took a vote and got ‘underneath the roots’. I think it describes the insecurity that is depicted in the song best.

Isabelle: Withering is very close to my heart. It’s the only song wherein I wrote the lyrics first before the melody. But still, even the melody and arrangement came so naturally with it. It was all feelings and intuition. I wrote it during a very personal, dark moment of my life. I love songs that are very honest, painful and raw. Withering is the song that really shows me who I am as an artist and person. It’s the song where I am most true to my vulnerable self.

On a less personal note, because Migs’s production work with Withering was so much better, it made us remaster and remix our two former songs (Undesired and Blindfolded). We did not intend this to be our first official release.

Gabba: Around the time I made the Lullaby riff, I was listening to The Weepies, like, all the time because I had just discovered them then. So I think that was the vibe I was going for. I’ve had that riff for the longest time, but I just didn’t know where to use it. It didn’t seem to fit my other band, Tom’s Story.

Isabelle: One day, Gabba left me and Happy Monday People with that guitar riff. He had to be elsewhere, so Happy Monday People and I took it from there. We wrote it one afternoon in a park – yeah, in a park! Lyrics, melody and everything, recorded in Garage Band. It was a bit embarrassing, working on it in a public place, but we had nowhere else to write.

It was cool working with Happy Monday People. We got a different creative perspective and take on things. I was amazed with his ability to make melodies. It turned out different because Gabba made the guitar riff and Happy Monday People played a big part in making it what it is.

Speaking of how different it is, when we were figuring out the EP track order, we decided to start from the song with the lightest vibe to the darkest, but we left out Lullaby from that order since it stands out the most. We thought a refreshing and happy ending would be the perfect track for the last song of the EP.

As a final note, Isabelle says, “We just want to say we’re very grateful for the positive response the EP has been getting. Our main goal for all songs is to have people relate to it and interpret it in relation to their own struggles and stories. It makes us really happy when they do and appreciate it.”

Click here to purchase Fools and Foes’ Underneath the Roots EP.