The upcoming exhibition So Happy: 50 Years of Singapore Rock will feature the best of our country's illustrious but relatively shrouded history of rock music. We recently covered the efforts going behind this project by a handful of passionate Singaporeans. Now, they've announced an exciting addition to the exhibit.

SO HAPPY: 50 YEARS OF SINGAPORE ROCK

On the first two nights of the exhibition's run, which falls on April 8 and 9, the people behind So Happy will be organising live performances by local bands. Being part of enriching the experience of learning the many bands that have shaped the scene into what it is today, the lineups will feature current bands along with the reunion of old favourites. 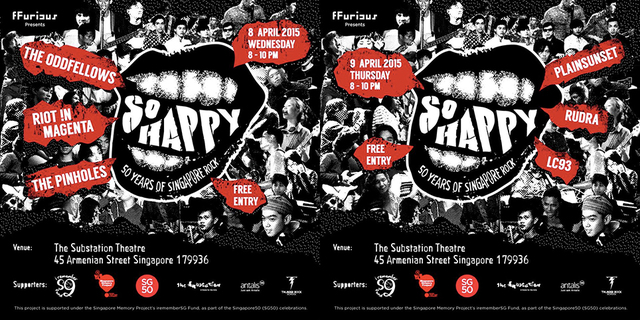 The posters for both nights. Free entry at The Substation.

The first night will have a neat variation in the three-band lineup. Fresh off a well-received EP titled Voices, Riot in Magenta will be bringing their brand of sensual and engrossing electronic pop alongside the sunny guitar melodies of The Pinholes. However, capping off the fresh talent would be the reunion of lauded alt-rock group The Oddfellows — a band who were as prolific with live shows as they were talented with studio albums in the 90s.

On the second night, however, there will be lots of moshing and beer-chugging with some of the heaviest bands Singapore has to offer. Alternative rock band Plainsunset will be bringing the ruckus alongside longtime metalheads Rudra, whose style of 'Vedic metal' remains a unique entity, and LC93 — a project formed by prominent members of various bands from the local 90s hardcore punk scene. So Happy: 50 Years of Singapore Rock will commence on April 8 - 17 at the Substation. Free entry.

You can also join the official Facebook group here. This project is supported by the Singapore Memory Project’s irememberSG Fund and The Substation, as part of Singapore50 (SG50) celebrations.