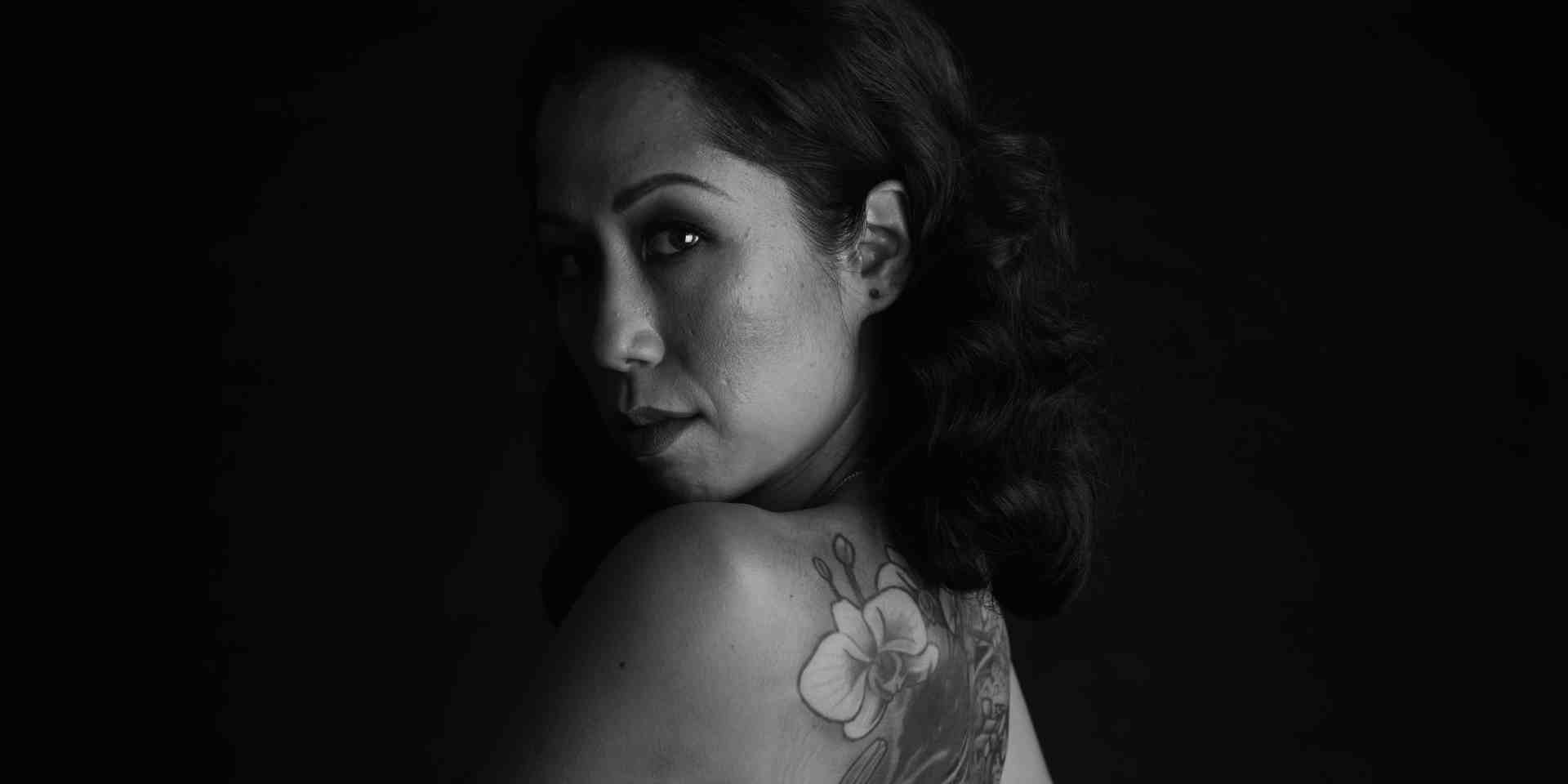 A new Vanessa Fernandez album has entered the ether.

What that implies is, that, at a time when music is regarded “content” fodder for the feeds in the soulless lottery of virality, a body of work by an artist who continues to believe in the value of music as a form as much artistically exciting as it is spiritually defining, is now available for the listener to enjoy. Released under the Groove Note Records banner, I Want You finds one of Singapore’s most gorgeously evocative voices reinterpreting songs by a diverse lineup of artists including Curtis Mayfield, Michael Jackson, Radiohead and Amy Winehouse, to name just some, through the veneer of R&B and soul. In and of itself, the selection presents a panorama of musical eras and traditions. But the songs are united by her exquisitely arresting, profoundly powerful voice, which, in lithe and luscious fashion, expands and enriches the legacy of the originals while affirming her own.

Then, there’s the fact that the luxe bed of sounds her deific voices rests on was shaped by a cadre of musicians including Tim Pierce, who has worked with Bruce Springsteen, Michael Jackson, Celine Dion and Roger Waters, former Michael Jackson bassist Alex Al and current Jimmy Kimmel Show Band keyboardist Jeff Babko.

So, with an album to celebrate and with more music to be released in August, under her Vandetta guise, Vanessa sat down with us recently for a chat about how the process of making the music she loves continues to move, challenge and humble her.

What does I Want You mean to you?

It's my third audiophile record with Groove Note, and I feel like it's not so much just the amazing experience of getting to work with these super talented and experienced people – it's not just the fact that I get to do that again. It's been out for a while now, and the general consensus is that this is my best audiophile album to date.

I feel that way, too, because I went into the recording as a new person. I didn't have to worry about coming back to a day job for a brand and with people I love but was a bit of a stressful environment. I had also cut out a lot of things that were not very good for my health, both physically and mentally – smoking, for example. I feel like the tone of my voice is better and my mood is so much better, and I feel like that came through in the music.

To feel like, even having been in this game for so long, I can still put out my best work, makes me feel really happy.

Sonically, emotionally and philosophically, is there a separation between Vanessa Fernandez and Vandetta?

Sonically, it’s definitely different. Vandetta is more electronic, whereas everything that I've put out as Vanessa Fernandez is more live and organic.

Conceptually, it's different, too. Vandetta is original material, whereas the Vanessa stuff is all covers. But I feel like the person is always the same – it still comes back to me and whatever it is that I'm going through, at whenever point in time. I'm using different paints on different canvases, but ultimately, everything is still soulful.

For I Want You, you picked songs from a wide spectrum of artists to cover. Why did you choose to cover the songs that you did?

The process usually goes: Ying (Groove Note Founder) will do a first round of stuff and he'll come to me with an idea. And it usually goes from there.

With this record, he was like, "We're thinking of doing classic R&B". For example, for the cover of Radiohead's 'Creep', we took inspiration from Prince's rendition. But for me, because I loved both Radiohead and Prince growing up, doing that cover had kind of a double meaning. I think they're all, in their own ways, a classic R&B and soul – we use the word “classic” as a way to describe music that has a timeless quality about it. So that was more or less the direction for the record.

What I was really happy with, was, that we actually managed to pick a wider range of artists, not just the more old-school ones or those that are "too classic", but classic in a conceptual way – which allowed us to come forward with something such as the Amy Winehouse cover.

The first song, 'Right On For The Darkness', is a protest song, as well as a song of strength.

Funny story is that 'Right On For The Darkness' was supposed to be the title of the record. For Ying, because it is quite a dark place in America right now, he felt that that song was reflective of the times. But when we started getting feedback from our distributors, it turned out that it might not be the best title.

The thing about Curtis Mayfield that I really like, is that while he sounds so light and almost floaty and uplifting, he had a lot of darkness. He was dealing with a lot of stuff and he didn't have a good life. Saying that, "Your petty evil don't bother me" is almost saying, "I'm not going to be affected by it". There's that understanding of sitting with the darkness and also fighting to not be consumed by it. And I can feel that – I can recognise that. I think anyone in this day and age who has deal with depression or anxiety, or any kind of trauma, would relate to it.

Your rendition of 'Billie Jean' is a very different treatment compared to the original. What made you want to take it in that direction?

We were sitting in Tim Pierce's home studio when we were going through the arrangements for the song. I just remembered him telling me to sing how I feel. ‘Billie Jean’ is such a familiar song, and when we played it, it felt so right. I felt so happy to be able to sing this song and to finally – officially –  pay tribute to Michael Jackson. When I was growing up and feeling shit about myself, MJ was the person that flipped it with his music.

You worked with towering musicians such as Alex Al. How did you stand your own ground while still taking in their input?

I feel like when I first did my first record, the weight of the fact that I was with people who have worked with people who were a hundred million times more famous than I am, it was very nerve-wrecking. But being someone who's also media-trained and worked in the entertainment industry for a while, I knew that I had to keep it together because studio time is money. So I was nervous while working through it.

This time, it's the same place that I've been to before, and I've been to Tim's place so many times and worked with him before. I think, going into it now, it was more a matter of how I can be true to myself and deliver how I feel about these songs as best as I possibly can. That's the part where you're like almost channeling something. I was just kind of vibing off them – because they're so good. It makes you feel like you also want to bring your A-game to it.

Were you apprehensive about how your radical treatment of these works by artists with such strong legacies are going to rub people the wrong way or be misunderstood?

I can't control that. That's part of the artistic process; you can't control how someone reacts to it. You can hope that they get it and react positively, but that's all you can hope for. It's wonderful when they express it back to you and you feel that. I think a lot of this music is meaningful to me in different types of ways – whether it's a personal connection to the artist, to the lyrics, to the stories of how they are connected to my life. For me, the most important thing is the energy, vibe and soul a song has – that's what I want to represent. I put my heart and soul into these songs, and whatever people take from it is whatever they get from it.

'Hey Stranger' is the most broken-hearted song of yours. Its pain is palpable and devastating.

Yes. It is very broken-hearted. I believed that I had met this amazing person and had this amazing connection. And then suddenly, everything changed. How does that happen, when you're so close to someone and you share everything and every aspect of your life – your mind, body and soul – and somehow, when that ends, you become strangers?

I think that's what we all feel, especially if you're still holding on to it but it feels like the other person is not. It feels like they've forgotten you. It's like the ultimate pained feeling; it's like you're completely abandoned. That's what that was. It's nice to be able to express it in music.

Does having it out in song make you feel any better?

You know, I'm not super close to that person anymore but every once in a while we'll say, "Hey, what's up?" to each other. And I don't feel the pain of that anymore.

The album was recorded, tracked and mixed completely in analog. Why was that?

That's part of the audiophile process. I do think they do some other work not necessarily with tape, but that's more of an executive production choice that Ying has, and we've always used tape. And actually, for me, tape was what drew me to this project to begin with. There are very few studios that do that, which is why we still go to Ocean Way. The beauty of tape is like that throwback where you got to nail it at one go. I think that lends to the process because you can't Auto-Tune it. I like having to push yourself to that level of musicianship.

Did the Vanessa that stepped into the studio to record this project change in any way once the record was finished?

I mean, it's difficult to say no. But, I don't really know if specifically this process changed me that drastically. I feel like I was already on this process of changing. I do feel that since I've completed the record, I have probably let go of even more darkness. I don't know if it's necessarily because of that process or just continuously moving forward. I don't really have a good answer for this question. Because, aren't we always changing? Isn't that the joy of life?

What about the album are you the proudest of?

I'm just really proud that I didn't quit. I'm also really proud that I made it out alive and that the little girl that my mum raised didn't die in the process of going through this whole music business and industry to get to where I am today. I'm really glad that the advice that she gave me to never compromise my integrity and to always be a good person has stayed the same no matter how much I've changed.