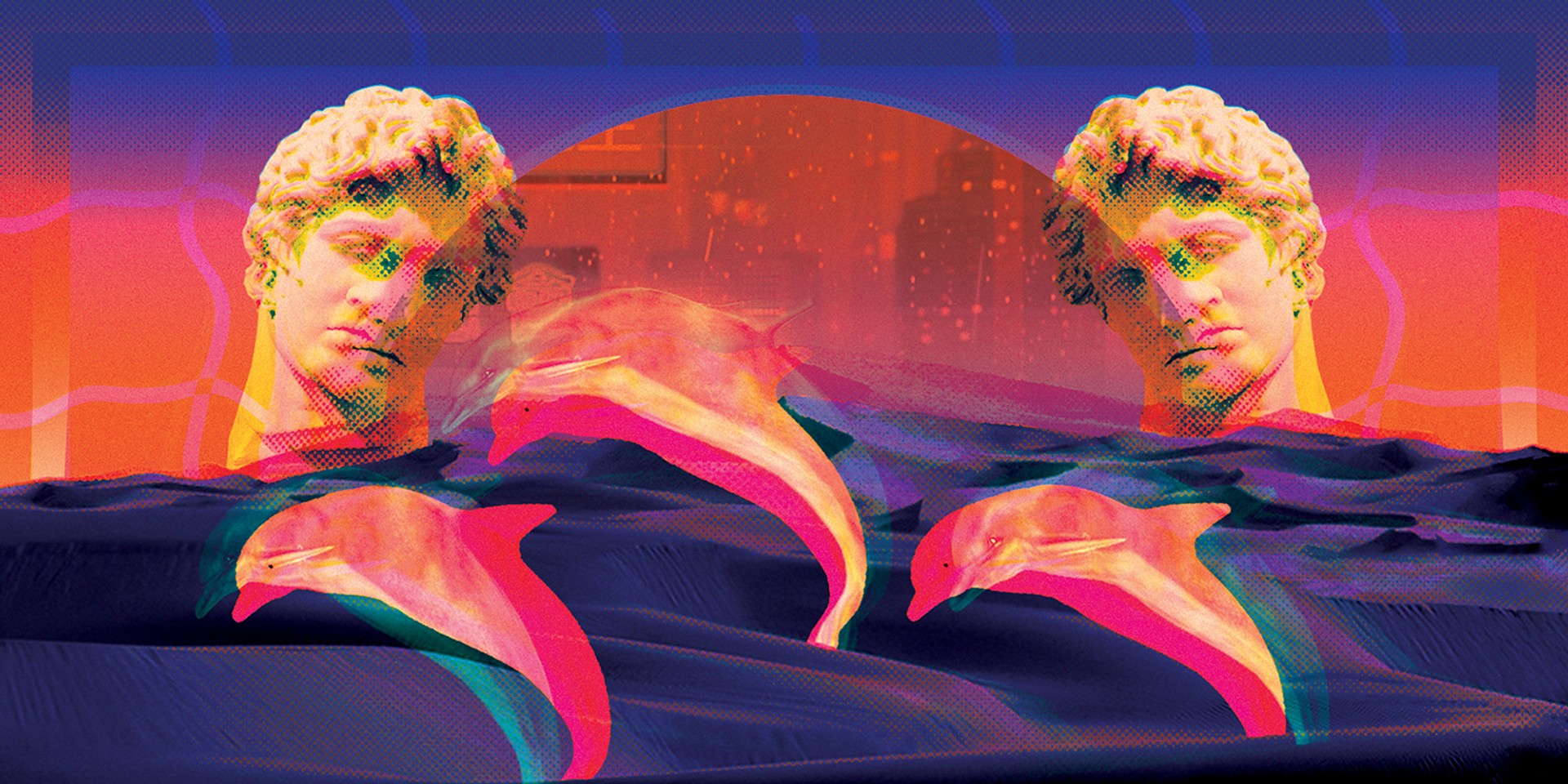 Music and the internet have one thing in common: they both excel at being instant breeding grounds for the weird and eclectic, the experimental and the esoteric.

But when the two merge at the peak, you'll probably end up with the hip, soulless, and unsettling micro-genre of vaporwave.

Vaporwave somehow reemerged in the Internet public's consciousness when Drake released his sensational and highly viral single 'Hotline Bling'. Frenzy over the track, and its very meme-able music video, was intense — ads, parodies, remakes, and opinion editorials were spent discussing and (sometimes) mocking the track.

But at fever pitch, one question surfaced among many conclusions: was 'Hotline Bling' a tribute to vaporwave? A genre most didn't know about and which those who did know about had assumed to be "dead". The music video, album art, and track itself, seemed to embrace elements of vaporwave and its aesthetics, which sparked a revival of interest in the genre. And of course, true vaporwave remixes of the song started to emerge.

Vaporwave, however, was conceived a little over five years before 'Hotline Bling' became a thing, inadvertently by legendary electronic musician Daniel Lopatin.

The album was remarkably different from Lopatin’s other work, in that it noticeably followed a steady 4/4 beat, betraying his usual schizophrenic nature.

All of the tracks were backboned by pitch-shifted samples of popular 80’s music (like Toto’s 'Africa', or Michael Jackson’s 'Morphine'), and it featured album artwork that featured crude graphical elements of the 80’s, resembling the video game Ecco the Dolphin (its tranquil, synthesized soundtrack also plays a part in vaporwave culture, but we'll come to that later).

While Lopatin didn’t dive deep into the ideas behind this oddball of an album, immediately abandoning any conceptual continuation fans hoped to see, suburban teens and young adults began using that album as the bedrock for a new, discerning style of music that would come to be named as vaporwave.

The name for the genre vaporwave is a play on the industry term "vaporware" – an industry keyword referring to a product announced to the public, but never sees the light of day. As the micro-genre grew, it began to adopt several characterising genre definitions.

The first wave of vaporwave music was almost entirely sampled, with little to no part of the music being original material. Instead, it relied heavily on sampling smooth jazz, R&B or retro elevator music (also known as muzak) and then slowing it down to a ghastly crawl — chopped and screwed into oblivion.

This loop is then phased through a series of varying effects (most commonly reverb and echo), and occasionally includes “misheard” lyrics (a key facet of vaporwave includes artists singing their own lyrics over the sampled songs, which are different but sound and appear rhythmically similar to the original song’s lyrics).

Uniquely though, vaporwave also adopted an overarching ideology during its developmental stage, something few other genres have had — let alone genres borne out of the Internet. Vaporwave adopted a critical ideology of art and capitalism.

The genre’s critique of art is fairly straightforward, with its high reliance on sampling. Most vaporwave tracks sport a complete lack of original material, preferring instead the myriad of sonic effects available on Logic Pro or Ableton. But the vaporwave sound isn't the only thing "stolen" — vaporwave album covers tend to sport a distinctively “mashed-up” look, a dystopian sci-fi amalgamation of 80’s references, digital-era trivia, and classical-era sculpture.

Like the music, vaporwave album covers often forgo the need for any original content in preference for a scrapbook of crude graphics. Oddly enough, despite the absence of original content, vaporwave has a uniquely distinct sound, and its idiosyncrasy has (ironically) lent itself original value.

The genre’s initial critique of capitalism, however, is a little more subtle.

The rampant stealing of material is essentially a huge middle finger to today’s consumerist society — a silent mockery of its own fans for buying into something that's merely repackaged and presented back to the population. The 80s-centric sampling hints at capitalism’s obsession with the new and updated, forcing listeners to appreciate music that was meant and limited by an era we left behind more than 30 years ago.

The genre’s unbridled hatred for sticking to 4/4 is a sarcastic reflection of a societal obsession with the "new" and "perfect", instead unapologetically embracing its own self-administered brokenness. Perhaps most poetically, the genre’s fondness for classical sculptures is a critique on how some of the most beautiful things in life are completely free (not that you can actually attain a Greek sculpture for free, but that you can use its image pro bono because they're not bound by copyright).

In the realm of vaporwave's core following (aka r/vaporwave), there are two albums in the genre that are heralded as the genre’s most significant in its early days: Floral Shoppe’s Macintosh Plus and Blank Banshee’s Blank Banshee 0. 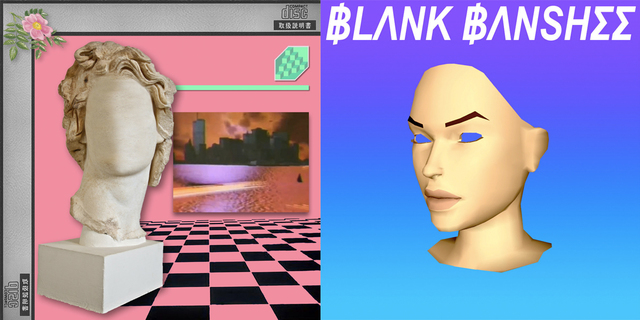 Both albums are crucial to understanding the foundational construct of vaporwave, in its context and entirety. The former is vaporwave at its purest, primitive essence. Everything about the album, from its twisted pitch-shifted samples to its cover art, exemplifies the current preconception about the genre.

Macintosh Plus is nonetheless brilliant because it shows what can be achieved within the confines of the genre despite its claustrophobic definitions — the album has a compelling sonic narrative; dystopian and soulless, and it develops consistently throughout.

Blank Banshee 0 is the opposite. It instead uses vaporwave as a springboard into the producer's own artistic direction.

It largely follows the genre definitions, but breaks them at the band’s own accord when necessary to deliver a groovy hook, or to make a track punchier, incorporating beats characteristic of trap music. Blank Banshee 0 is a progressive record, taking the genre and tweaking it for the community to experiment with. These two albums signaled the end of the first wave of sample-heavy music, and ushered in ripples of ingenuity that reconfigured what it means to make vaporwave music.

At this point, vaporwave had spawned a following for itself, but for a long time it had not convinced anyone of its artistic credibility.

BIRTH OF A NEW WAVE

Enter Hong Kong Express (now simplified to just HKE). The enigmatic British vaporwave producer came out of nowhere and took the genre to new, critically approved, heights. By most accounts, HKE was the much needed step-up vaporwave needed, in more ways than one. HKE had found a way to present a vision of vaporwave that didn't always require the ideology to do the heavy lifting.

He dropped the blatant sampling, opting instead to generate his own elevator music soundscapes. His aesthetic, while still clearly associated with vaporwave, drew heavily from elements of Wong Kar Wai films and 80s Japanese culture — a distinct departure from the usual Greek sculptures and Windows 95 imagery.

This re-appropriation of the genre’s defining lines helped push HKE’s unique brand of vaporwave away from meme territory into new, unfettered ground ready for post-Internet music.

Vaporwave's seamless, virtual brewing ground has also allowed a multitude of collaborations, and HKE's ongoing collaboration with artist t e l e p a t h テレパシー能力者 birthed 2 8 1 4, which stands as the most critically-acclaimed act out of vaporwave so far.

In the style of Flying Lotus, whose label Brainfeeder houses the misfits of the psychedelic electronica and beat scene, HKE founded Dream Catalogue, which he now owns with his 2 8 1 4 partner.

Dream Catalogue has curated a free-flowing stream of artists that have presented exciting and thought-provoking pieces of work.

death's dynamic shroud.wmv's twisted and glistening effort I'll Try Living Like This was singled out by FACT Magazine, while 2814's Birth Of A New Day has become a definitive piece of work for the new movement and post-Internet music altogether — it encapsulates the entrancing parts of vaporwave, but condensed into a distinctly cohesive artform that also embraces past musical innovators, like Boards of Canada, Burial and Sigur Ros.

Several other labels have also sprung up, offering different takes on vaporwave, with some of the more traditional sample-heavy music (aka "mallsoft") and various mood-driven interpretations.

Notice how this video, while embracing elements of vaporwave's retro-nostalgia and stylized imagery, is still put together by original animation and music composition, rather than relying on samples and VHS-quality video clips.

But even as Dream Catalogue has since grown into a legitimate record label, with an assortment of vinyl, CD and cassette releases (far away from vaporwave's early days with "pay-as-you-wish" download options on Bandcamp), it has also distanced itself from the traditional 'vaporwave' label, instead opting the use of terms like 'hardvapor', 'dreampunk' and just 'vapour' to define their music.

"... [it's] dream music for underground people living in this increasingly surreal dream world reality." so says HKE in a description for a curated mix submitted to Boiler Room.

This move sparked debate in the vaporwave community, but at the end of the day, it also signals artists who intend to break free from genre constraints to explore even further — no matter how abrasive the move might seem. Vaporwave is really just one name that has become a fluid tag in itself.

Another subgenre, future funk, has also garnered its own devoted fanbase, with artists like マクロスMACROSS 82-99 and Yung Bae receiving considerable attention, while someone like Saint Pepsi has since adopted those influences into a more conventional pop form, under the name Skylar Spence.

Despite leaps in artistic development, vaporwave has yet to break out of being a meme in the public eye. At worst, it is confined to being a photoshopped picture of Bill Clinton holding a Macintosh Plus record, and at its best, it confronts and challenges avid music listeners’ idea of what even constitutes music (or design).

Whether or not vaporwave "dies out" as yet another meme buried in the annals of Know Your Meme remains to be decided by the council of the Internet, but nonetheless vaporwave struck a unique kind of gold that no other form of music has done — repackaging Dadaism into a form of subversive music for a new generation of disgruntled, philosophical netizens.