"The cats here… they don't care about you," Bandwagon editor Ilyas whispers as a cat gingerly dodges his hand as he reaches out to pat it.

The cat cafe is actually a Taiwanese invention, but the Japanese made it famous. It's all over the world now; London just opened one last week, Spain too. America, you're almost there - but we beat you to it. Neko no Niwa is Singapore's first cat cafe, sitting pretty by the Boat Quay riverside, amongst the seafood restaurants selling gargantuan flower crabs. How it works: pay a cover charge (like a club, but no free drinks and drunken teenagers), and for one hour you get to frolick with cats, it's as simple as that. Stay as long as you want but it functions on a time-based fee system, meaning it's another $5 for 1/2 hour blocks. 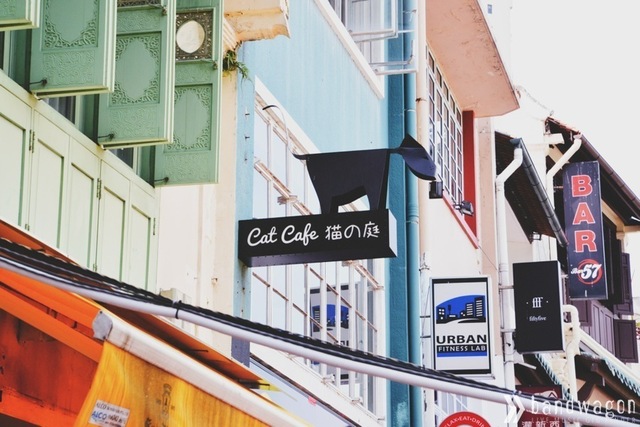 With French music playing over the speakers which seemed to lull the 13 cats into states of sleepiness, we added another two more cats to the repertoire - Hentai Cat and Psycho Cat, two-thirds of eclectic alt-rock band MONSTER CAT. Once, they dabbled in acoustic guitar-driven dark folk, but have since transcended beyond that and for the new album The Violet Hour, you get to hear electronic textures and distorted vocal samples even. Psycho Cat settles in right away and mews a scarily accurate meow to a cat lounging nearby. He is largely ignored. "It's so nice to not be attacked by a cat," he says, alluding to his feline friend at home, whom he simply describes as 'fat'. He didn't have to worry - the thirteen cats of Neko no Niwa were relatively well-mannered throughout our stay, save for a minor incident involving two cats and one seemingly favourite sleeping spot.

Band On The Run

Fresh from the release of first single - the vibrant 'Take Me To Love' -  MONSTER CAT are still as busy as they were when recording first started. And maybe before that, when they were all over Europe, Japan, and Los Angeles. Packing up to record The Violet Hour with highly regarded Aussie record producer/engineer Tim Carr at the famed Studios 301 in Sydney for a two-and-a-half months in 2013 (where the likes of Kanye West, Lady Gaga, Muse, U2 and even Tiesto have also cavorted) MONSTER CAT have never shied away from bold steps. In 2012 for example, they put up their EP Mannequins on Pirate Bay to be downloaded for free; an unorthodox approach that ultimately paid off when they garnered an overwhelming amount of fans worldwide. They now consider themselves as full-time musicians, with a handful of side project. Throughout MONSTER CAT's existence, they've never failed to show us how committed they are to their craft. 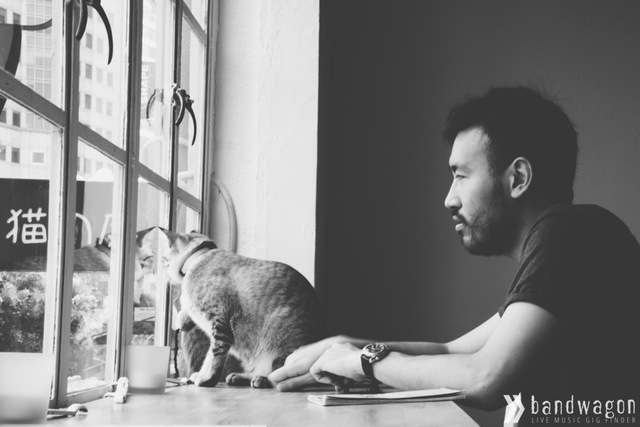 The next few weeks are no downtime for the cats as they prepare to be openers for English band Foals in KL (they opened for the flamboyant Empire Of The Sun last week at Fort Canning), and also look forward to their upcoming trip to China where they were invited to play as part of the JUE Festival. "It's sounding really killer in the studios. Not to blow our own horns or anything!" Hentai Cat explains, "Just the other day I got goosebumps over the second or third rehearsal. I think in the past we tried so hard to make it sound good but now it's coming through without having to think or fuss about it."

Prior to the time in Sydney, the band arranged a crowdfunding campaign on the Indiegogo platform where they garnered US$11,365 to go forth and create LP #1. Fans from as far as Brazil have come forward to show their support for MONSTER CAT. "I don't see many cons to crowdfunding," Psycho Cat says. "But I think it's important to not be half-assed about it. Because it's digital and online, you can't expect it to do its own thing. At the end of the day it's crowdfunding, a form of fundraising, so you need some personal connection and interaction," Hentai Cat adds. And this is exactly what these guys have done; with some of the donations, they've included personal flourishes like handwritten thank you notes from the band, 3D-printed figurines and even including the donors' names in the album liners.

We bantered some more about the career progressions of Foals and Coldplay with some laughs and Psycho Cat doing his cat impressions to the prancing cats around (they responded by yawning). I asked about their plucky decision to take the recording process to Australia as Kai Kai and Luna stirred from their slumber near the window. 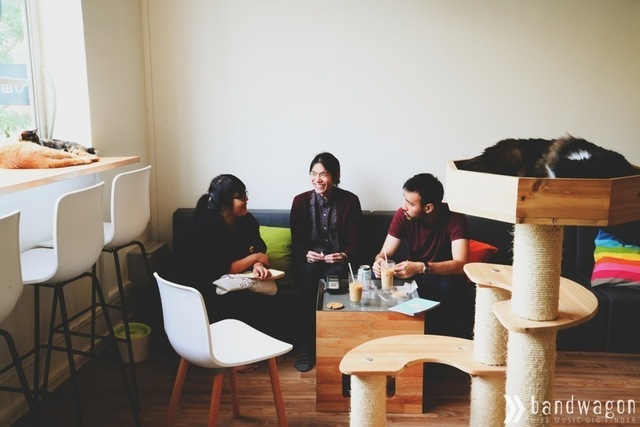 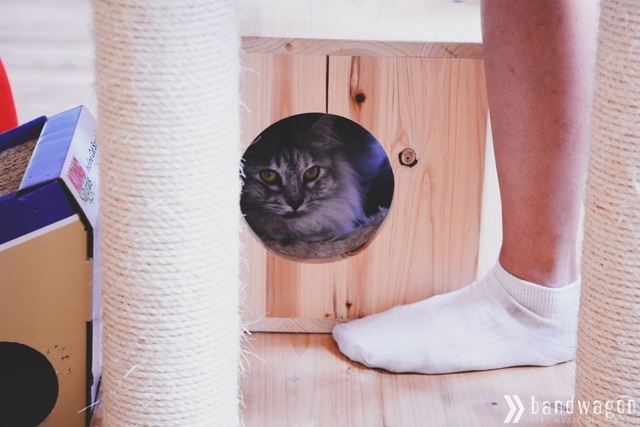 In line with the 'bigger' realisations, The Violet Hour certainly is a colossal step-up from their previous EP - or any album we've heard from Singapore, sonically and thematically. It's a record filled with lush textures and multitudes of instrumental layering and at times, electronic soundscapes; enhancing the trademark MONSTER CAT dark atmospheres. Production quality is extremely top-notch and it looks like it'll be benchmark for many Singaporean bands who want to take the next step and record a proper full-length album. It's also a definite grower - with each listen you manage to appreciate the conceptual depth and elusive, understated melodies that pull at the fringes of your peripheral hearing. 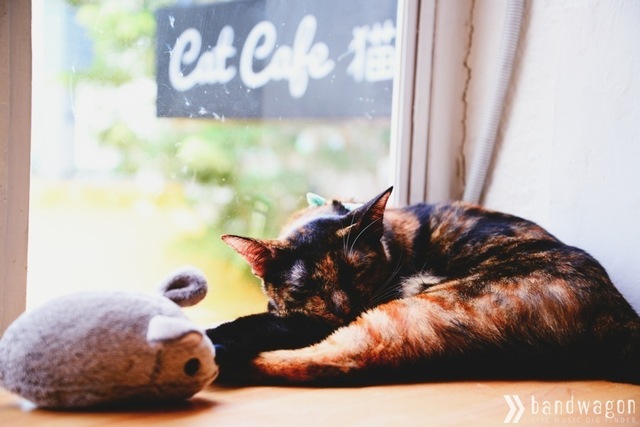 Inspired by the TS Eliot poem 'The Wasteland' for the album title, they both expressed their fascination with how the poem takes you sprawling across space and time, from Industrial London to Greek Mythology - and it was this exact borderless and timeless element, they wanted to embody in their music and the album. Delving deeper, Psycho Cat says, "There's a lot going on in the poem - questioning society, the role man was playing - almost like a machine, there's also the duality of things, the clashing, and sonically, it fits us because we're trying to bring together all these different things like electronic textures and samples to our sound". 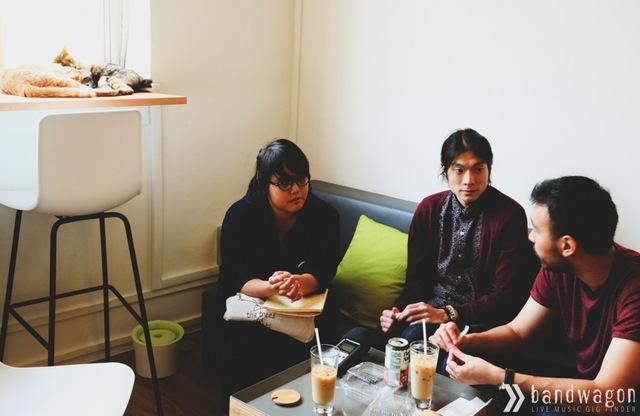 "I wanna ask you, did you find the whole recording process tiring, sort of draining?" Psycho Cat asks his bandmate. He goes on mulling over the process of getting the song right and ponders, "Do we think too much?" 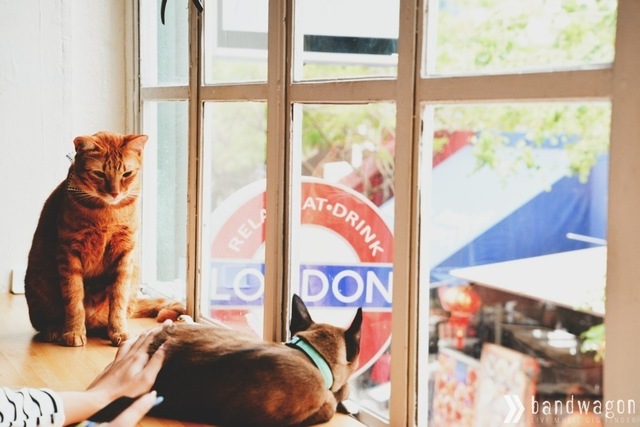 But on serious side, there are challenges the band had to work their away around. For Hentai Cat it was two things, and one of them revolved around logistics. Putting everything together was the most ambitious thing he has ever done, and it was a huge undertaking - financially and logistically. "How are we going to do this?" was a question that ran through his head very often. Putting a timeframe to the creative process was also part of that puzzle, knowing that they had invested a lot of time and money on it meant that the had to put in everything to make sure they don't 'f**k up'. The other challenge was the creative process itself. It was the first time they wrote an album and with different expectations, they had to learn to communicate their ideas and make decisions collectively. "As musicians, we had grown a lot since Mannequins, and everyone had a stronger idea of what they wanted to achieve with the album, and that was something we had to work out together," he says.

The difficulties Psycho Cat faced were the myriad of things going on at once, and having to deal with every detail and thing, within a timeframe, so as to not throw the band off-schedule. "There's so many headaches, from personal gear issues, to communicating with each other about songs, emails, DIY marketing, the financial stress… it hasn't ended. We're full-time fools." 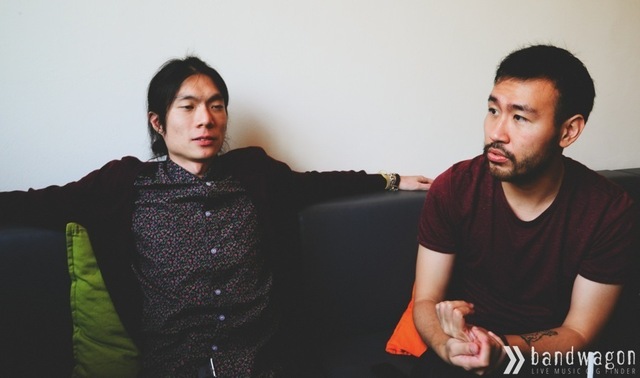 Somewhere behind a cat fight (fur real) breaks out. Apparently, the ginger cat Kai Kai is set on the coveted sleeping spot currently occupied by the awfully pretty white cat, Emma. Kai Kai pushes Emma down 3 cat-storeys and there is a bit of yowling and all is peaceful again. One of the staff assures us that it's a normal routine. 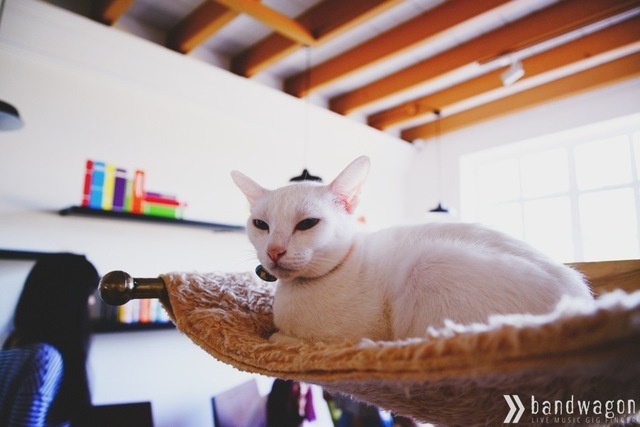 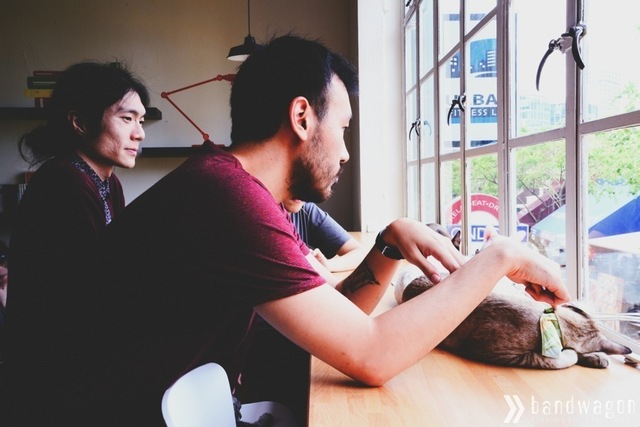 At The Violet Hour, The Evening Hour That Strives

Interview by: Delfina Utomo and Ilyas Sholihyn
All pictures shot with a Nikon D610, courtesy of Nikon Singapore 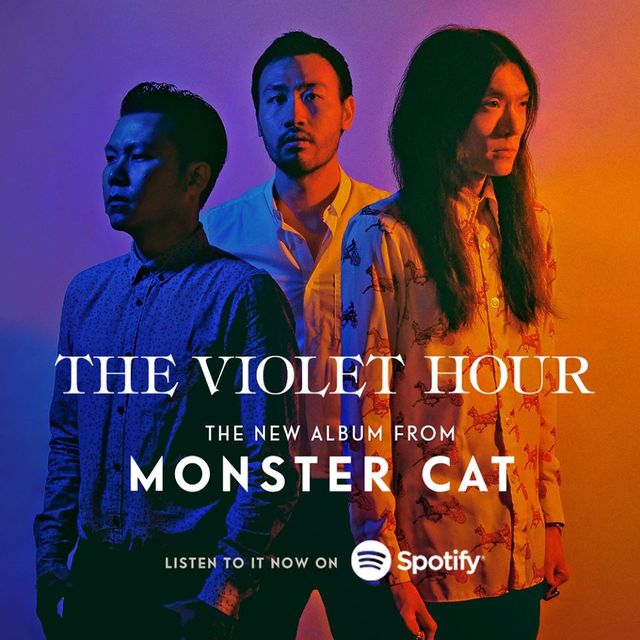