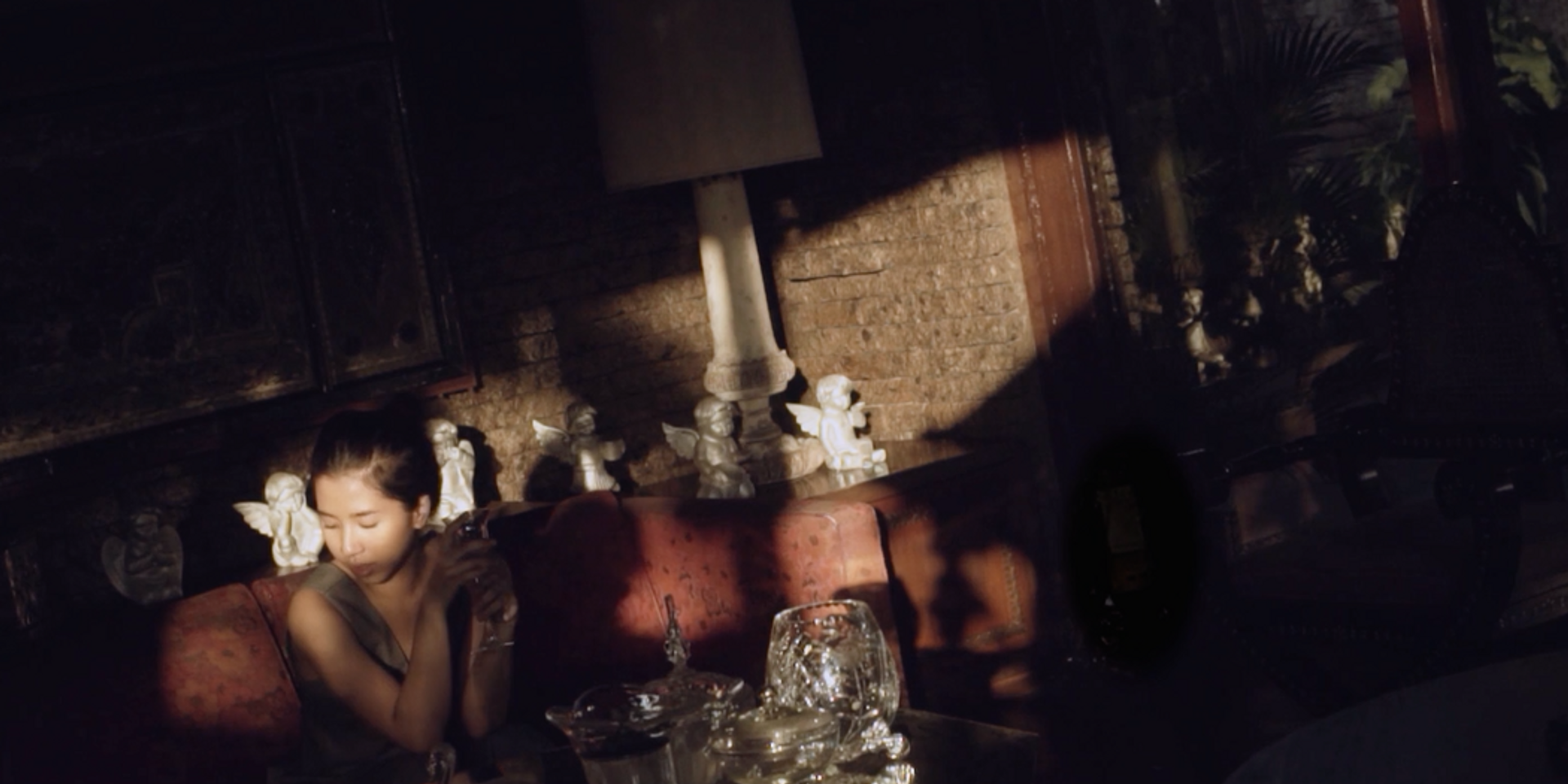 For over two years, Logiclub has built a reputation for itself that goes beyond our local EDM borders. Made up of young talents such as Curtismith, BP Valenzuela, Roberto Seña of St. Vincent and the Grenadines, and CRWN, the collective continues to grow in numbers. One of their up and coming artists just made her debut along with the premiere of her single’s music video last July 16 at the Borough in Podium, Ortigas. You better etch the name Olympìa in mind from now on. 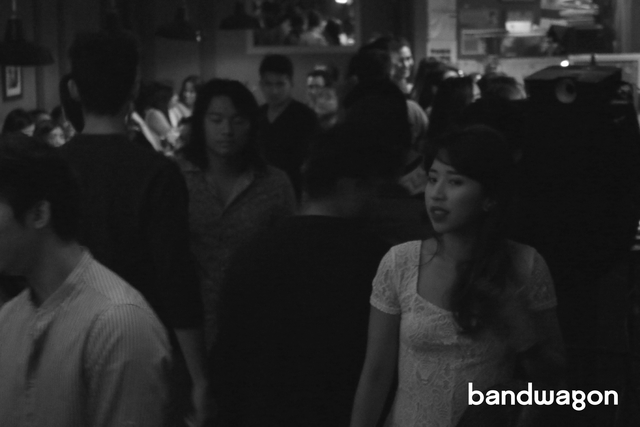 In a sea of producers and DJs, Olympìa’s voice makes her stand out. She’s been releasing her material on her respective Soundcloud and Spotify pages for a good year now. 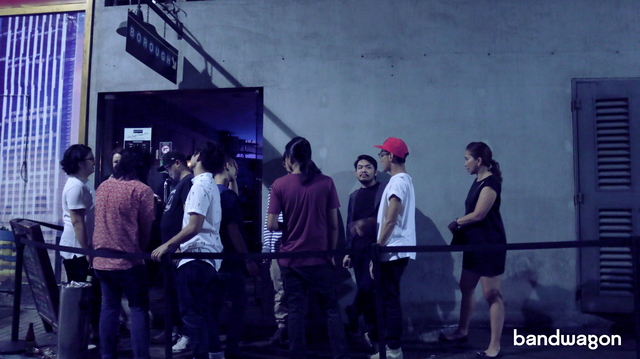 The downpour of the night just ended and Olympía’s just getting started. 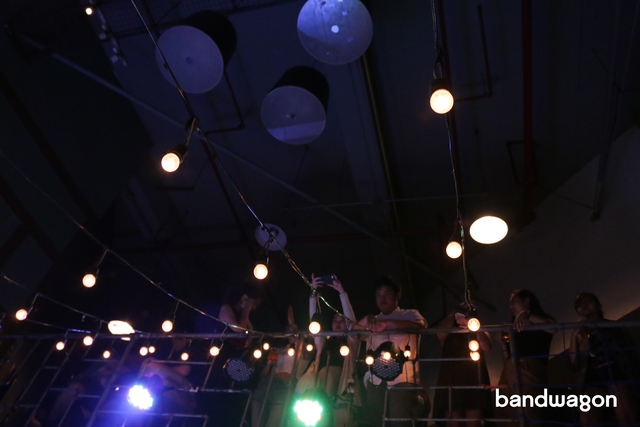 The mood being set by the collective’s beats and the crowd’s settling in.

Fans of Logiclub probably know her more through her collaborations with Aries and Dante. “These guys are producers and they DJ. So when I perform live, I just sing the songs. I think what makes me distinct is that I love using my vocals as my main instrument." explains Olympia. "That’s my main edge. That’s my favorite instrument. I do sampling and I don't sample works of other artists. I just make my own.” With such a distinct edge, one must wonder why it took her this long to make her debut.

“Actually, I can't believe this moment 'cause I've been doing this for like two years already?” she answered, seeming a bit taken aback by her own statement. “They’re always asking me: ‘Where do we find your music?’ Parang ako: ‘Um, I'll just send it to you?’ Because, I want it to be perfect. I want to give it out there in it's best.” 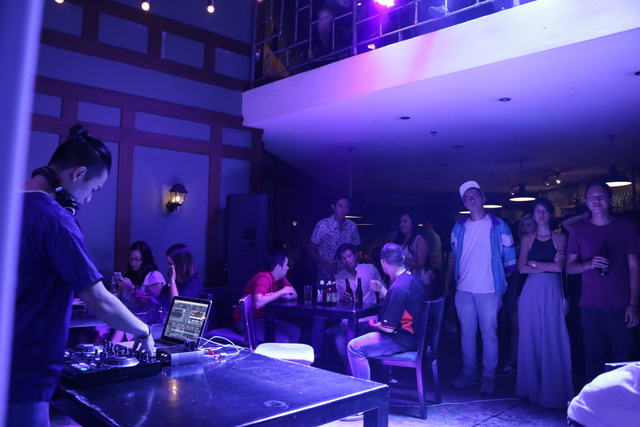 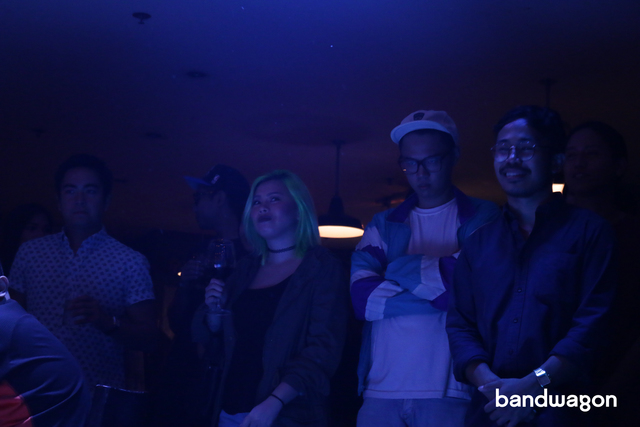 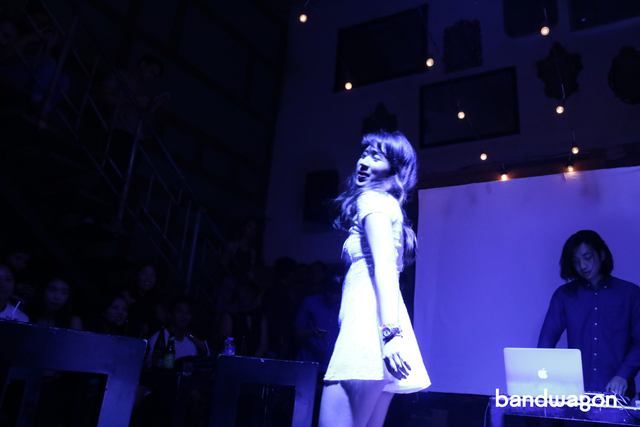 Olympia laying her originals with Aries.

“I was insecure with my sound also 'cause it's really experimental and I just started making beats. Before, I was only playing my guitar and piano. And I was wondering: How am I going to put beats into this? How am I going to make it into a song? How am I going to put instruments into it? Then when they introduced me to producing, beat making—I was overwhelmed with the possibilities! Like, shit, I could put weird instruments into this!” She described the birth of her sound. “What's different about me is I'm really shy with my work. It took me time to actually share it even with Logiclub,” she confesses.  “But they were the ones who pushed me and told me: ‘It's good stuff.’ Parang ako, don't you think it's a little bit weird or out of the box? Maybe a bit crazy? But they said: 'No, It's good.’ And I said, okay. I just kept doing it.” 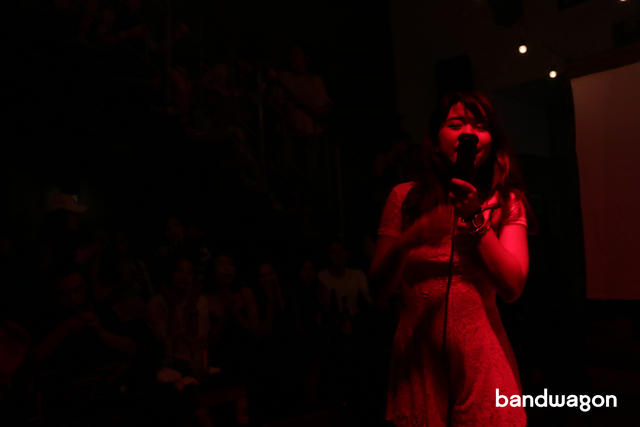 Never underestimate a girl who can drop some bars.

Her hustle and grind gave birth to her distinct sound of heavy themes within smooth beats. Her vocal chops are undeniable and she definitely could spit some verses herself. She recreates herself within every song and collaboration that she does. This is apparent from her earlier material to her debut track and music video 'Nothing Wrong', which was made with the visual stylings of Logiclub’s resident filmmaker, Jorel Lising. 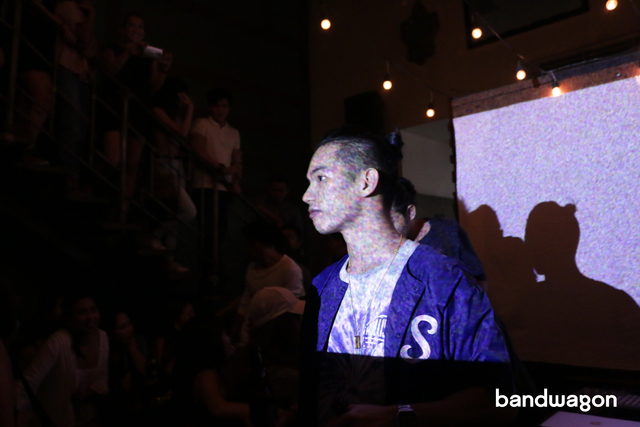 Kidthrones setting himself up for a visual spectacle. 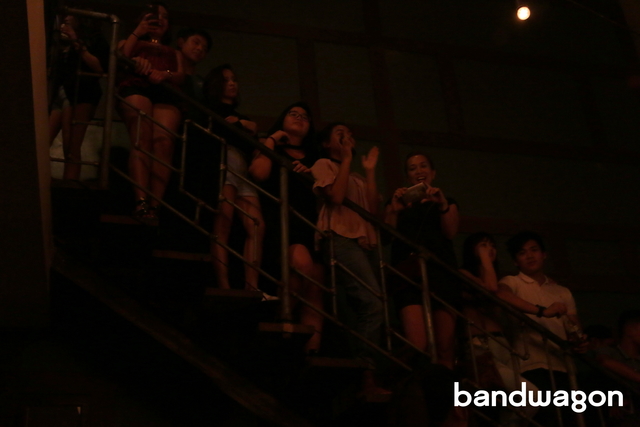 Everyone from the top floor to the bottom huddling up for the night’s preview.

On choosing 'Nothing Wrong' to mark her official artistic debut, Olympia had this to say: “I think because it's catchy and I like the meaning of it, which is like being trapped. It's making love a trap. Love is a trap no matter how hard you want to escape it. Even when it's over, it'll still haunt you and you can't get out. Alam mo yung, di nag-flourish na love? You live with that, you wanted that, and when you're there, you're running in a circle.” 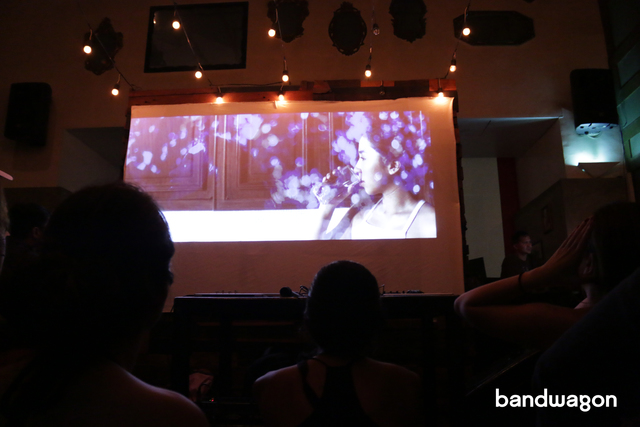 “It's a mood piece. We wanted to play on psychological, creepy, stuff,” added director Jorel Lising. He gave nothing further than that, wanting the thrill still intact until the preview. Olympìa wasn’t the only one debuting that night. This was also Lising's first foray into music videos. 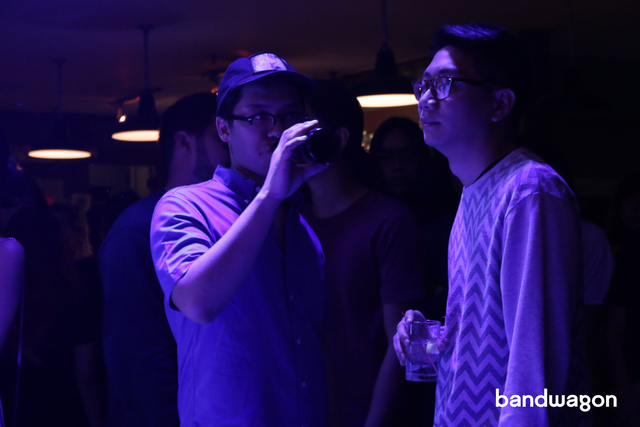 “I enjoyed the process since you're not restricted with creative limitations, no clients involved, it's purely your creative drive.” he explained his experience on this project. “She gave me creative control, but once I was building on some material, she gave me her opinion on it. It was a back and forth. She's open to my ideas and I was open to hers. It worked out.” he added. Seeing the crowd chant for another repeat after the music video played, he wasn’t wrong on that one. She wanted to give it out there when it’s the best. The crowd already made the confirmation for her. 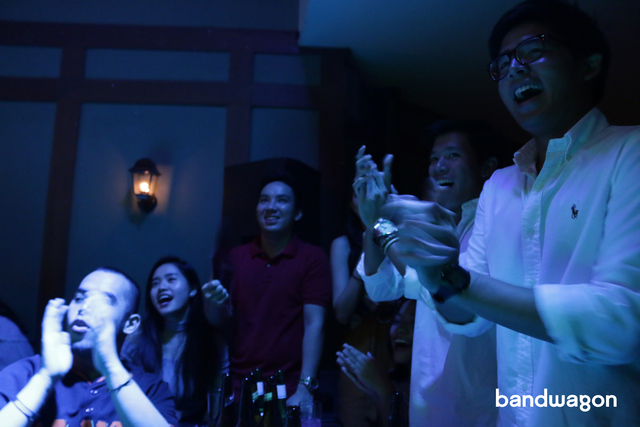 “Isa pa! Isa pa!” they chant after the video has ended. 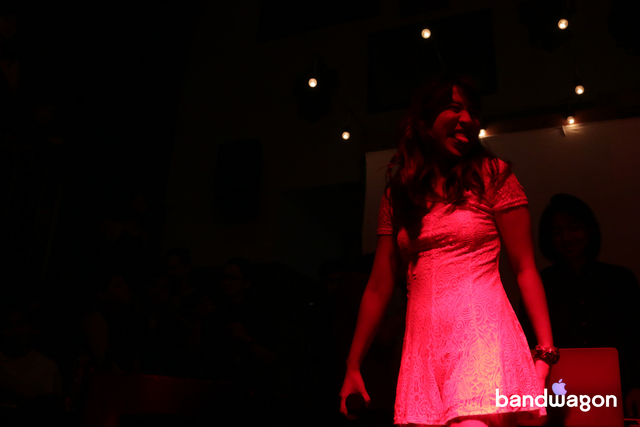 “When you say Olympia, it's not a side project of Anica Feliciano. It's like another person. Sort of like, a bolder me? Anika is kenkoy, sobrang casual.”

Asked about the goal she had set for herself, Olympia says, "I want to make music that will cater to all tastes and different kinds of people. I'm an entertainer. I did plays, cheerleading— anywhere I can entertain people. It's not only the voice, the beat; it's about making people happy. That's the main goal. Forever.” 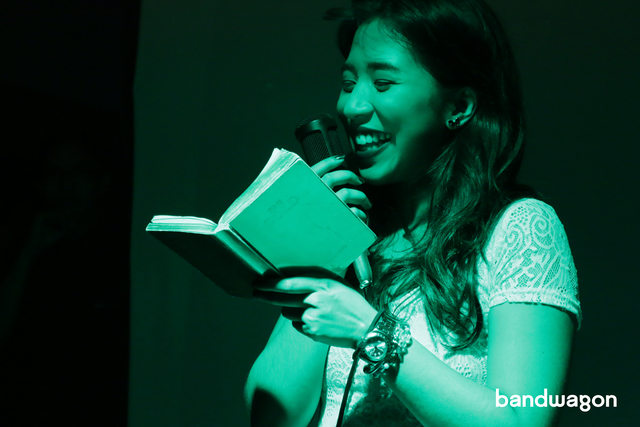 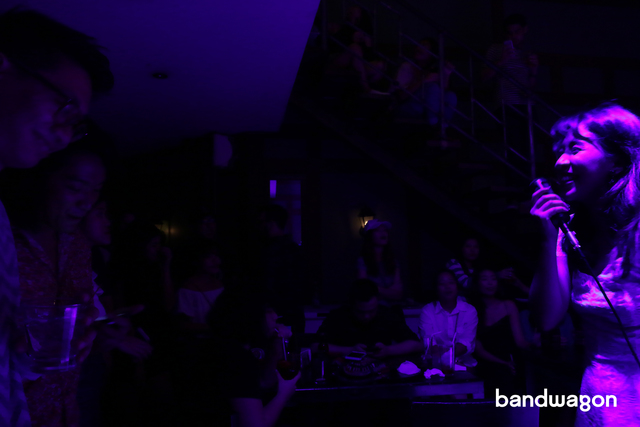 'Nothing Wrong' is a substance production, directed by Jorel Lising and performed by Logiclub's Olympia.

'Nothing Wrong' is available for purchase here.