Even if you haven't listened to any albums off The Flaming Lips' extensive discography (which is a mistake you should rectify soon), you would already be aware of the zany and fun antics of frontman Wayne Coyne. The 53-year-old has courted controversy in his own right but with his band, he has spearheaded tonnes of eccentric and intoxicating live shows that include him surfing through crowds in a plastic bubble with a lifetime's worth of confetti, along with lasers and blisteringly colourful visuals and props. A Flaming Lips show is a real-life psychedelic playground factory and Wayne Coyne is Willy Wonka.

From the Zaireeka project to Heady Fwends and now With a Little Help From My Fwends, the band has never been short of surprising and exciting its fanbase. In the latter project, he enlists a huge ensemble of established musicians, some incredibly befitting (Foxygen, Dr. Dog, My Morning Jacket) and some head-scratching (Miley Cyrus, anyone?), to tackle a reworking of the classic Beatles record Sgt. Pepper's Lonely Hearts Club Band. The band will be in town on 1st Dec for a live performance after their highly-successful maiden gig here in 2010. We had the pleasure of speaking to Wayne himself, a verbose and incredibly friendly man who was never shy of praising their collaborators and talking about the extensive recording process of their albums, along with mistakes made on stage.

THE FLAMING LIPS LIVE IN SINGAPORE

Hi Wayne! Where are you at right now?

Hello! Well I’m sitting in my house in Oklahoma City, kind of a snow in day for us.

Well we’re not thinking about that much just yet. It's still a couple of days away. Thanksgiving is just after Halloween which is big in America here. We just eat and drink on Thanksgiving really.

Were people surprised by your decision to cover Sgt. Peppers?

Well I mean people are aware that The Flaming Lips do these types of things. We did Dark Side of the Moon [1973 album by British prog-rock band Pink Floyd] first in 2009. It all kinda happened by accident. We didn’t intend on releasing it as a proper album at first. It was supposed to be kind of a extra bonus thing with [2009 album] Embryonic and then I think it became some sort of a popular thing I think we just made that choice to play along with that and do shows playing the album. It became something we did and we didn’t intend on doing this Beatles album.

We did a New Years Eve concert where we did a few Lennon songs, like 'Lucy in the Sky with Diamonds' and 'I Am the Walrus'. We rehearsed in our recording studio, recorded it and kept it. When we were in the studio with Miley Cyrus, we chose this one and added her in. It turned out to be a stellar track and we wanted to put it out. We thought it was great and people would be curious to know what we would be doing together anyway. When people around us heard the track, they thought “It would be better if you did the entire Beatles record!” We felt it would’ve been a lot of work, like some of the songs seemed impossible to do like 'A Day in the Life' but we just gave it a shot anyway. A lot of our friends we worked with along with new people made it all work. 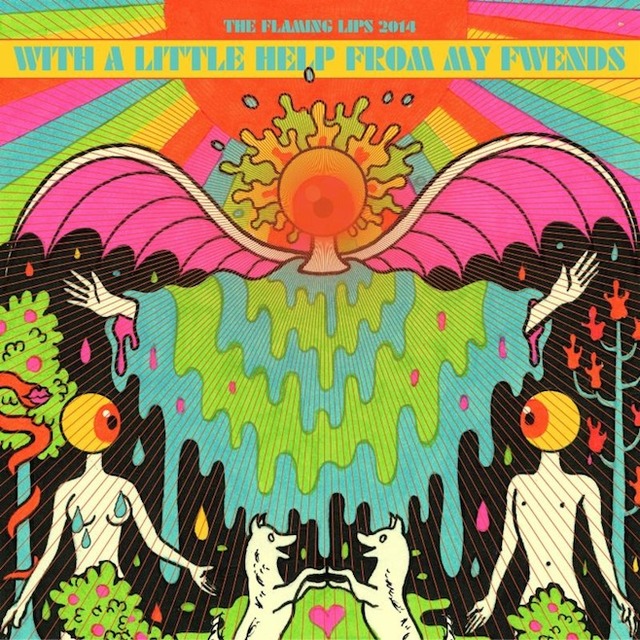 Were any of your collaborators on With a Little Help From My Fwends difficult to pursue?

Well not difficult, I know most of them and the ones I didn’t know came to me. I know that it is more stressful for them. For My Morning Jacket, they’re a big group so that was a bit of an effort but [frontman] Jim James runs that ship pretty good. Phantogram were gonna be on tour but they did find the time to record the stuff on their track which I feel were some of the best stuff on the album. Well there were some people that i am trying to get. The one that I thought we were going to do was Sean Lennon. He was going to be finished with his tour but then he had more tours. So it was just people that I thought would have the time to do it but didn’t have but that’s all really. It was just a matter of finding the time and space for each contributor.

I was trying to get Warpaint and they wanted to do it but they weren’t just happy with what they were doing. Jack white too. Didn’t know he was doing a new record though. Die Antwoord, those guys definitely. There’s always a bunch of people who I am interested to collaborate with.

Have there been any elaborate f**k-ups during their show?

*laughs* Well there always is. Most people would probably know or not care but it’s only occasionally when the audience has to know. One thing we’re always aware of and there is a tendency of young girls especially to have a bad reaction to the strobe lights and the smokes. When that happens, someone will pass out and it will definitely be scary moment for paramedics and us but most of the time it’s a mild reaction. It’s that kind of reaction which can still be frightening. Normally, things can go pretty disastrously because we are aware of what’s supposed to happen in our live shows but the audience remains unaware. If the space bubble doesn’t work right, the audience wouldn’t really know since it’s still a small portion of show. There are still things that can go wrong, but nothing dangerous.

When we played a show in Chicago, we kinda had this quiet minute or two towards the end of the show before everything kicks in all at once. It was supposed to be this explosive thing but all the power went out suddenly. You wouldn’t know how long it’ll take but stuff like this happens and we just play along. A couple of minutes it came back and we just carried on with the show. i think it’s really all up to you and what you make of it. I’ve seen tonnes of band get angry and not want to performing. They could be too demanding or in a bad mood but we know the audience doesn’t care that much about that shit. Just sing your songs and have fun.