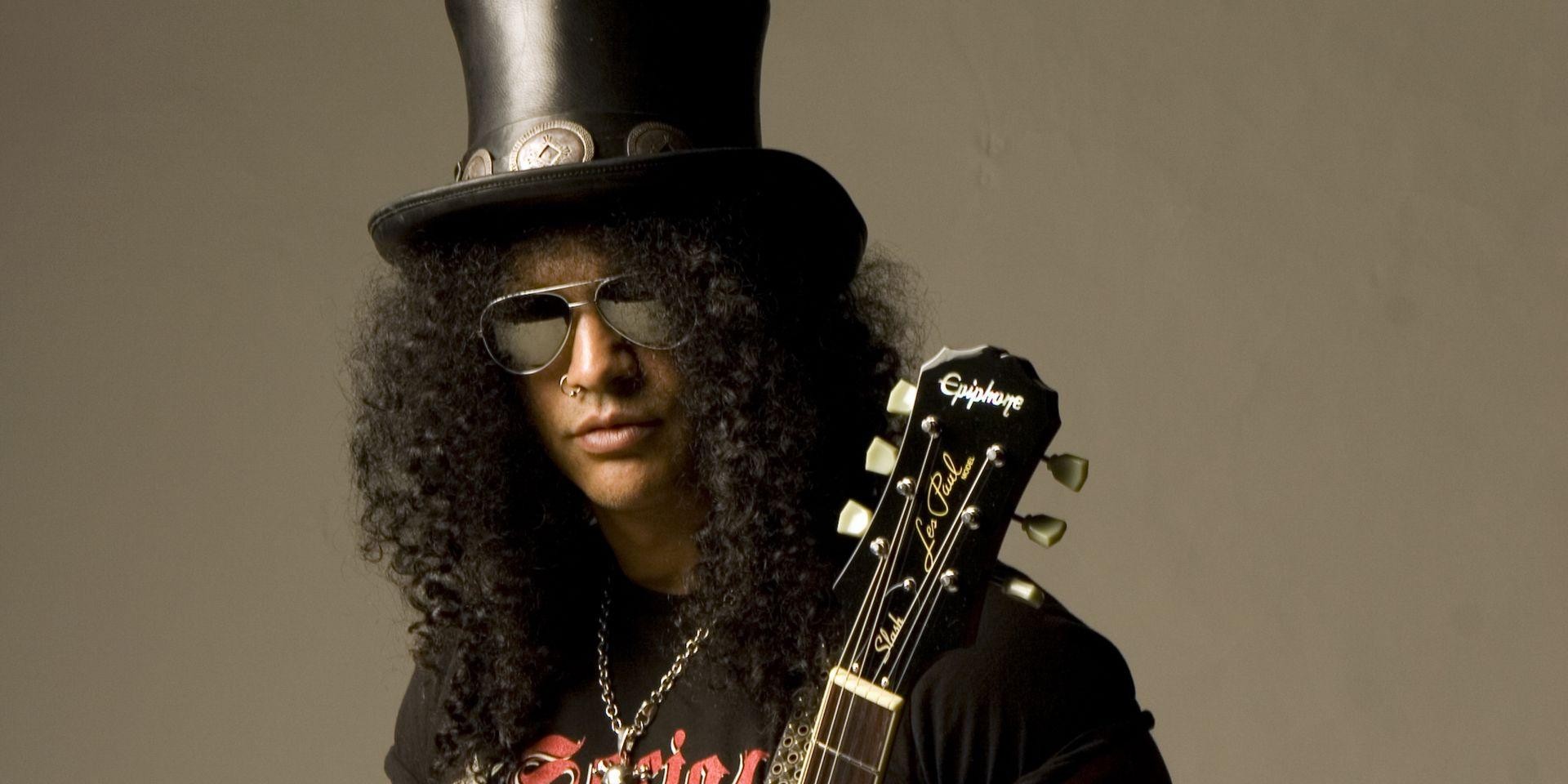 Whether or not he has come to expect it, his name inspires reverence from wide swathes of popular culture: Slash. At a time when there has never been more pressure on public figures to appear human because of social media’s self-annihilating tendencies, he walks the Earth a god for the simple reason that his songs have long ascended to the stratosphere that is our collective memory. For even the most casual music fan, his role in immortal touchstones such as ‘Sweet Child O’ Mine’ and ‘November Rain’ is cemented and defining. As the musical cynosure of Guns N’ Roses, he affirmed his place in the pantheon of rock guitarists – and he’s still pushing on. Earlier this year, he released his third studio album with Myles Kennedy and The Conspirators, Living The Dream and made a characteristically virtuosic case for why kinetic, from-the-gut rock ’n’ roll distilled through a monumentally spellbinding skillset, will never die.

Ahead of his upcoming one-night-only performance date here, Slash himself chats with us about the majesty of rock and the part he is continuing to play in it.

How does it feel to be coming back to Singapore again?

I’m very much looking forward to playing Singapore. It’s been about a year-and-a-half since I was there last. I don’t know if I have enough time to actually hang out like I did last time. I think we’re sort of in-and-out. But I’m most looking forward to the fans, delivering all of this new material, and seeing how all of that goes over. So I’m really excited about it.

Congrats on Living The Dream. What does this record mean to you personally? Where does it stand in your collective body of work?

In the collective body of work, it’s really just the latest record (laughs). You don’t really compare or analyse what you’re doing now to what you were doing a year ago or two years ago, that kind of thing. I just like to stay in a forward motion, right? But as far as what the record means to me, personally, I just think it’s a really cool rock 'n' roll record. If it wasn’t me who made it, I would like it (laughs). So I’m proud of the way it sounds and the songs… everybody’s playing, Myles’s singing, it’s just a cool record. It’s not reinventing the wheel but it definitely has an energy and a sincerity to it that I think is lacking in rock 'n' roll at this moment of time. Not a lot of bands doing straight-ahead live records like this, so I think it’s cool. 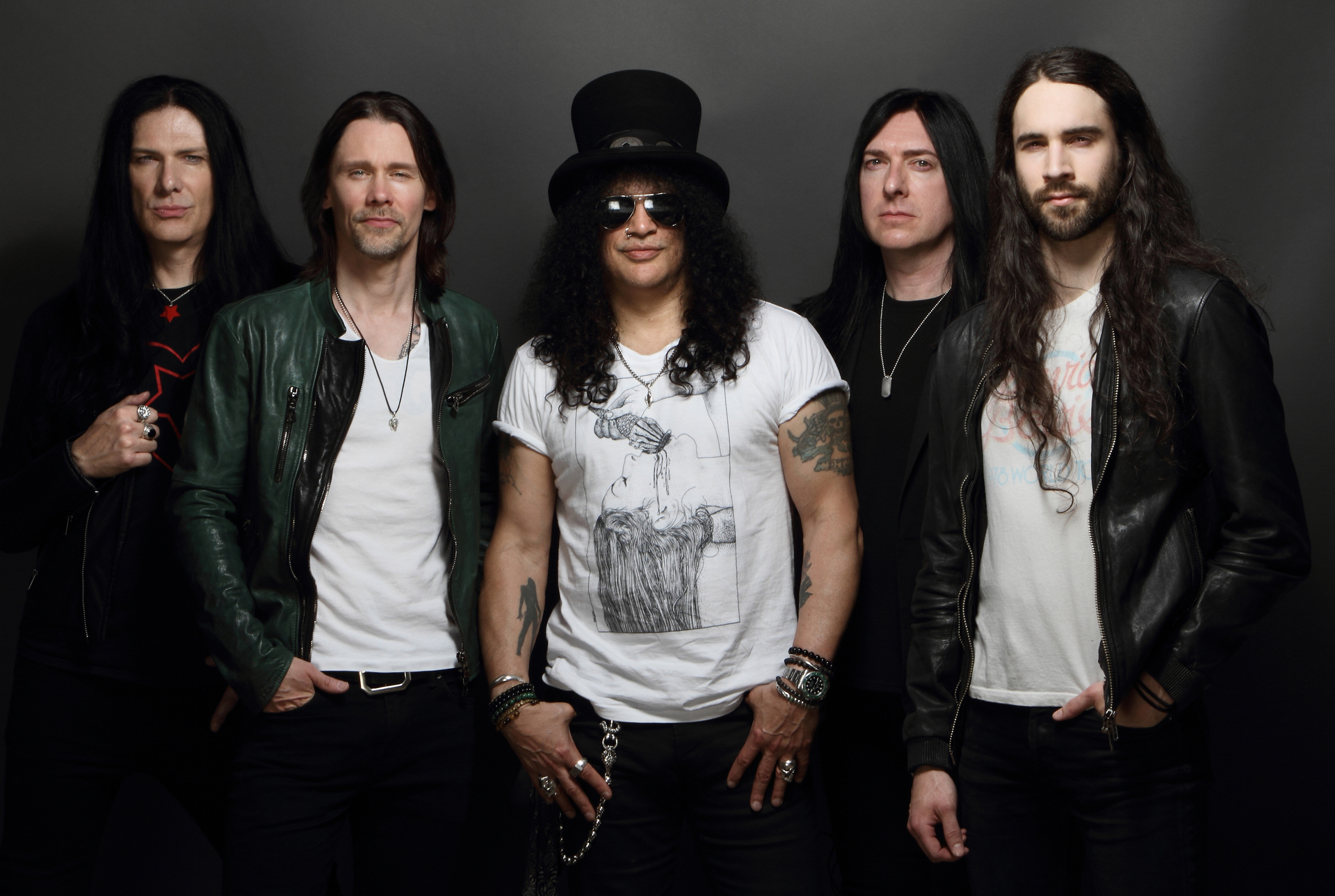 How has it been working with Myles Kennedy and The Conspirators, both in the studio and on the road?

When I first worked with Myles, the first couple songs that we ever did together were really the first times that I had ever heard him sing. I just thought he had an amazingly soulful voice and an incredible range. Plus he’s a really great guy: Easy to work with and nice to hang out with. The tour I was going on, at the time, was going to encompass pretty much my whole catalogue and he was able to sing all that stuff. When Myles and I first started working together and decided that we were going to start touring, I had to put together a backing band pretty quickly. I was introduced to a drummer who I was not familiar with named Brent Fitz. I worked with him for a couple hours, and he was the perfect guy. Brent told me that he knew this guy in Vegas named Todd Kerns.

So, Todd drove out, we started rehearsing together, and he was the perfect bass player, plus he’s a fantastic singer on top of that. So that was basically The Conspirators. I had a guy named Bobby Schneck playing guitar for a little while, who I used to work with for Slash’s Blues Ball, which was a blues cover band that I did back in the late ‘90s. But this was obviously going to be something for the long haul, so he wasn’t prepared for that. We auditioned guitar players and everybody knew this guy named Frank Sidoris – I didn’t know him but everybody else knew him. He just turned out to be the perfect rhythm guitar player. So there you have it. It’s a great lineup with a bunch of really great musicians who really know a lot about music, have really defined roots, and just love to play, so it’s a fun band to be working with.

It’s known that you’re a dual citizen of the US and UK. Is there a side you identify with more than the other?

I have a very personal history with the UK that, to this day, is very strong with me. I have a lot of family in the UK and a lot of the music that I grew up listening to was all from the UK; I think that’s where my earliest influences came from. So I have a very personal attachment to my UK heritage. I feel very strongly about that. But I also equally appreciate everything that America has done for me since I moved here. I don’t think I would be necessarily who I am had I not moved to America as a kid and had the combination of my British roots and American music exposure. And also just being able to see more of the world at a younger age. I treat them both with equally humble passion and love, you know? 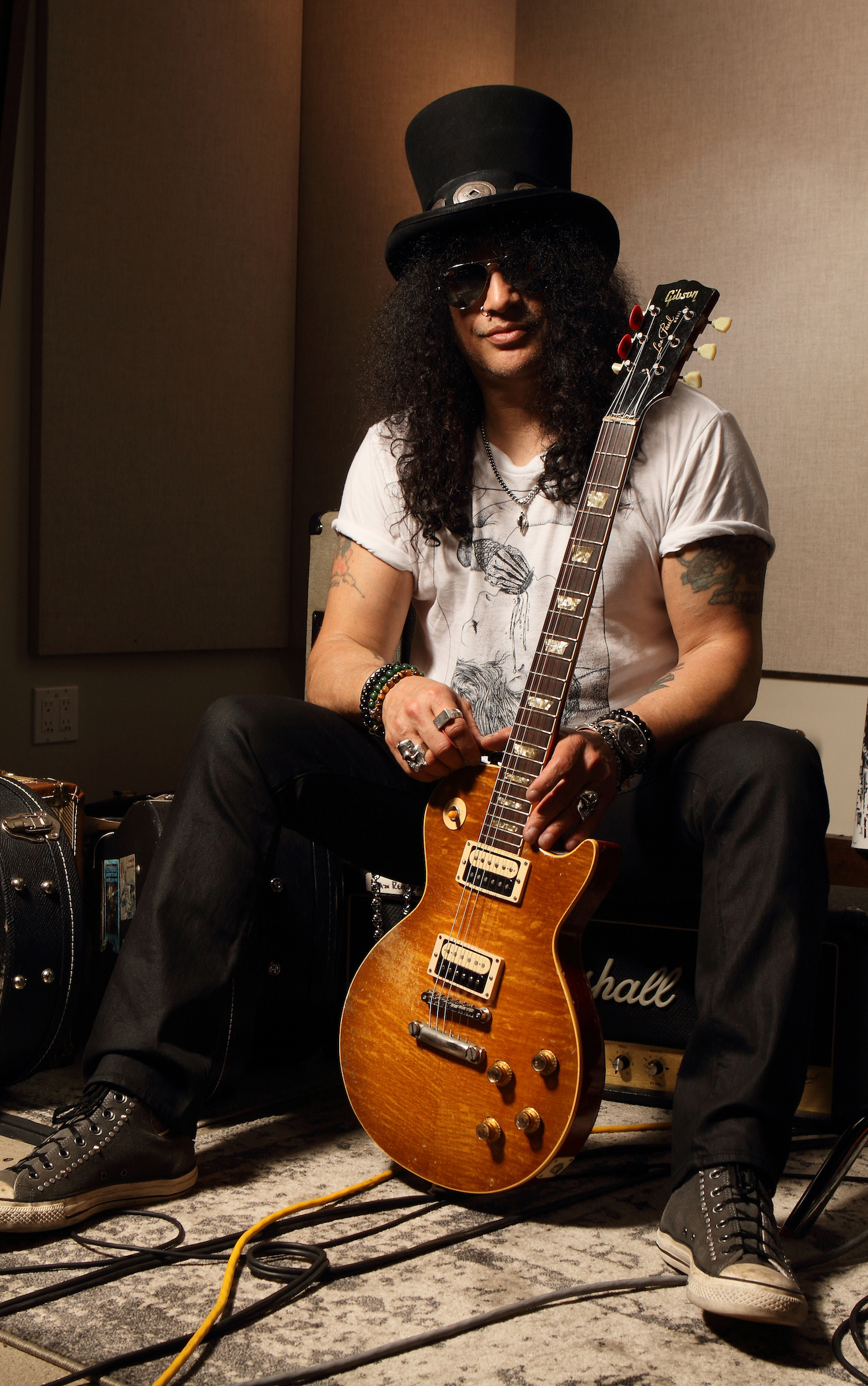 At this point in your career, what still gets you excited about making new music and playing live?

Making new music is just exciting. I don’t think that will ever get old. As long as you’re able to come up with a new idea, it’ll be exciting. And then playing live is probably the main reason why I play rock 'n' roll guitar, I think. When I was a kid, I used to listen to artists’ live albums instead of their studio records because they were just that much more exciting. So one of the reasons I love touring so much is that it affords me the opportunity to be able to play every night. I can’t imagine not playing live. I don’t think I would feel as happy as a player if I wasn’t going out and touring every night and playing shows in front of people every night.

That’s not even fair (laughs). I love both those guitar players and I don’t think rock 'n' roll guitar would be the same without either one of them, so I’d hate to pit them against each other. 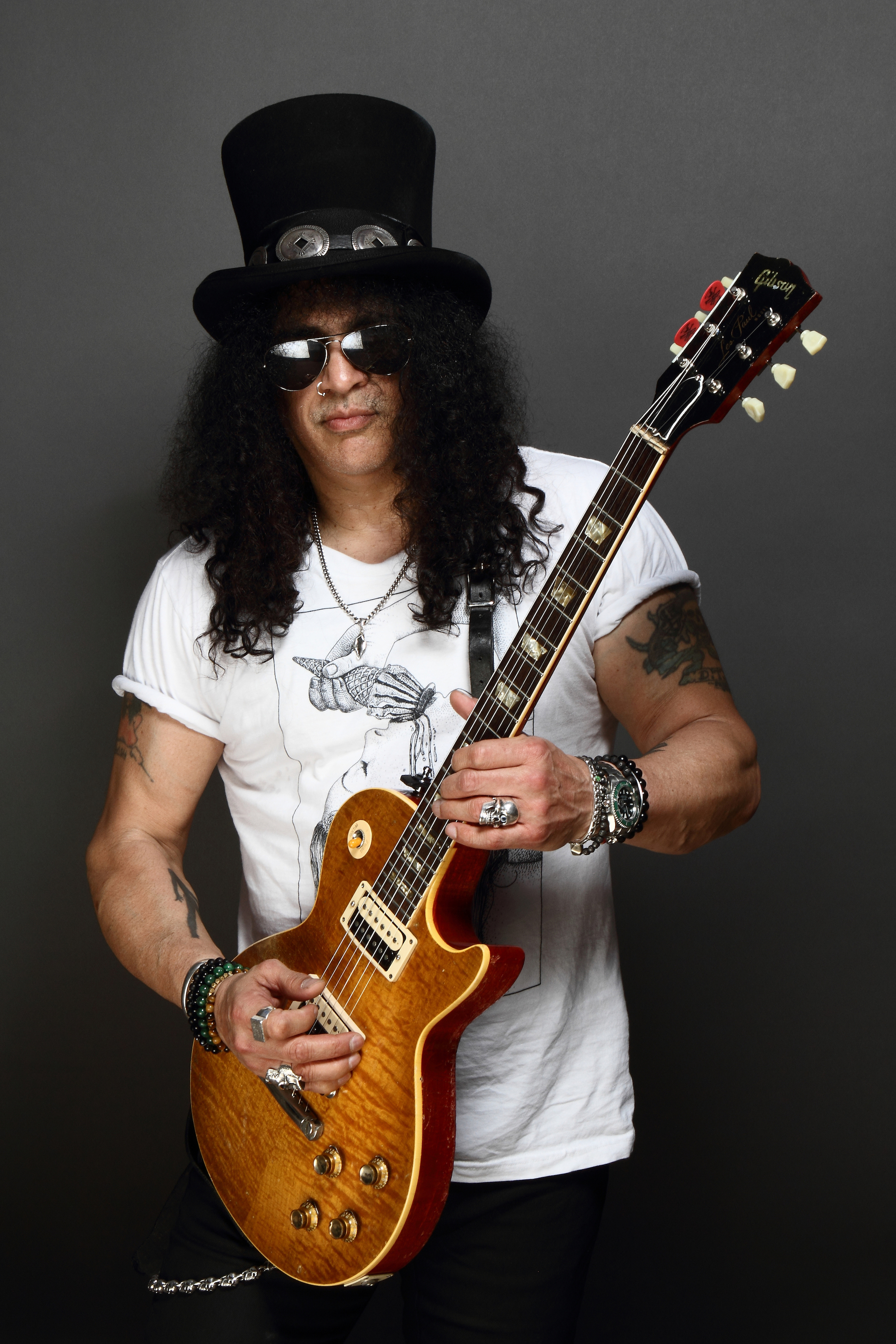 Whether with Guns N’ Roses or in your solo guise, you are regarded as one of the greatest musicians of all time. What do you make of your own legacy?

I’m particularly proud of Guns N' Roses. Out of everything about that band – the music, the tours – basically, what the whole band was about is something I’m very proud of. Guns N' Roses was a band that made it on our own merits and didn’t cater to the status quo or try to be industry darlings or any of that kind of pandering that a lot of bands do to try to become successful. So, I’m very proud of that, and I’m proud of Velvet Revolver, I’m proud of the solo stuff that I’ve been doing with Myles… all that stuff is something that I feel was an achievement, and worth doing.

What advice do you have for the next generation of musicians who aspire to be guitarists at a time when rock 'n' roll isn't as popular as it used to be?

This is actually really important. It’s not about commercial success and, with that, how much money you make or how many cars you buy or any of that kind of stuff. The most important thing about playing an instrument – and in this case we’re talking about guitar – is the passion for the instrument and the way it sounds. The ability to be able to play it and grow on it. To write on it or do whatever it is that you want to do with it. That speaks to you as a person, and if you’re creating, you go out there and make it happen and if you’re very successful doing that, that’s icing on the cake. But the most important part about it is staying true to what you love. So, in this world of commercial variables, it shouldn’t affect your desire to be able to go out and do what it is that you love to do.