During the bulk of the 1960s, the Malay community in Singapore was utterly swept up in the rebellious world of rock ‘n’ roll.

Dozens of bands sprung up seemingly overnight, live gigs with loud amplification (unusual in Singapore at the time) were regularly held and regularly packed, local EPs were flying off the shelves, and prominent band members were mobbed in public by frenzied fans as if they were The Beatles themselves. In fact, this phenomenon later came to be known as Pop Yeh Yeh because of The Beatles hit 'She Loves You (Yeah Yeah)'.

The music of Elvis Presley and The Everly Brothers had already gripped the consciousness of local Malay youths by the late '50s but many point to the raucous Cliff Richard and The Shadows gig at the Happy World Stadium on 14 October 1961, as the real catalyst for Pop Yeh Yeh. Crammed to the rafters with boisterous fans, the legendary British rock ‘n’ roll band clearly left a sizeable cultural impact on the Singapore music scene.

Every kampung kid wanted to be in a band after that show.

And true enough, bands like Jefrydin and the Siglap Five, The Mood, A. Ramli and the Rhythm Boys, Impian Batik, and Kassim Selamat and the Swallows arose shortly after. These kugiran (a shortened term for “Kumpulan Gitar Rancak” meaning “a group with fast guitars”) initially started out playing covers, but when a song called 'Suzana' by M. Osman and The Clans unexpectedly became a household hit in 1963, the mindset in the scene shifted towards writing new songs and playing original material. This was where Pop Yeh Yeh began to differentiate itself.

Although inspired by Western pop songs, these Malay bands instinctively began incorporating Malay melodies and a traditional asli singing style to the bilingual Malay-English lyrics they wrote, making Pop Yeh Yeh a truly distinctive subgenre. But while the sound was unique, their style, attitude and fashion kept the West’s brashness. These four-piece groups were loud, played immensely catchy up-tempo tunes, inspired their crowds to dance wildly and copied contemporary Carnbary Street fashion (ie, coats and ties for the guys, bright blouses and miniskirts for the girls). They were essentially the prototype Pinholes.

While scenes today try to recreate the kampung atmosphere, theirs was a literal kampung, with a sense of unity that you just can’t find in modern times. Everybody hung out, played gigs at each other’s weddings and nobody would ever make a noise complaint because, well, they were all at the show! Plus, prior to 1969, there was no such thing as public entertainment licenses, so bands were free to play anywhere and everywhere.

Since all the bands were based in the east side of Singapore, Geylang Serai served as the de facto hub for the thriving Pop Yeh Yeh subculture. While scenes today try to recreate the kampung atmosphere, theirs was a literal kampung, with a sense of unity that you just can’t find in modern times. Everybody hung out, played gigs at each other’s weddings and nobody would ever make a noise complaint because, well, they were all at the show! Plus, prior to 1969, there was no such thing as public entertainment licenses, so bands were free to play anywhere and everywhere.

Performances weren’t just communal attractions at the kampung, bands also frequently played high profile gigs at venues such as the National Theatre and the Fraser & Neave Hall. In fact, The Rhythms Boys even played for the PAP’s 1966 Anniversary dinner as well as a road opening ceremony at Jalan Eunos! The media was also instrumental to Pop Yeh Yeh’s surging popularity. A radio programme called Penyanyi Pujaan Minggu Ini (meaning “This Week’s Popular Singers”) was a key source of mainstream coverage alongside the inclusion of Pop Yeh Yeh songs in widely seen films such as P. Ramlee’s Tiga Abdul in 1964 and Omar Rojik’s Agogo 67 in 1967.

But most importantly, it was the recording industry that helped Pop Yeh Yeh spread regionally. Given that Singapore was already established as the centre of Malay popular entertainment, the infrastructure needed to turn Pop Yeh Yeh from a scene into an actual industry was readily available. The demand for Pop Yeh Yeh EPs proved huge and tested the limits of these facilities as multitrack recording wasn’t available back then. Nevertheless the pressings kept coming, and kept getting snatched up just as quick. Sadly though, most of these bands weren’t fairly compensated despite the tremendous sales, as record companies kept sketchy account of royalties at that time. 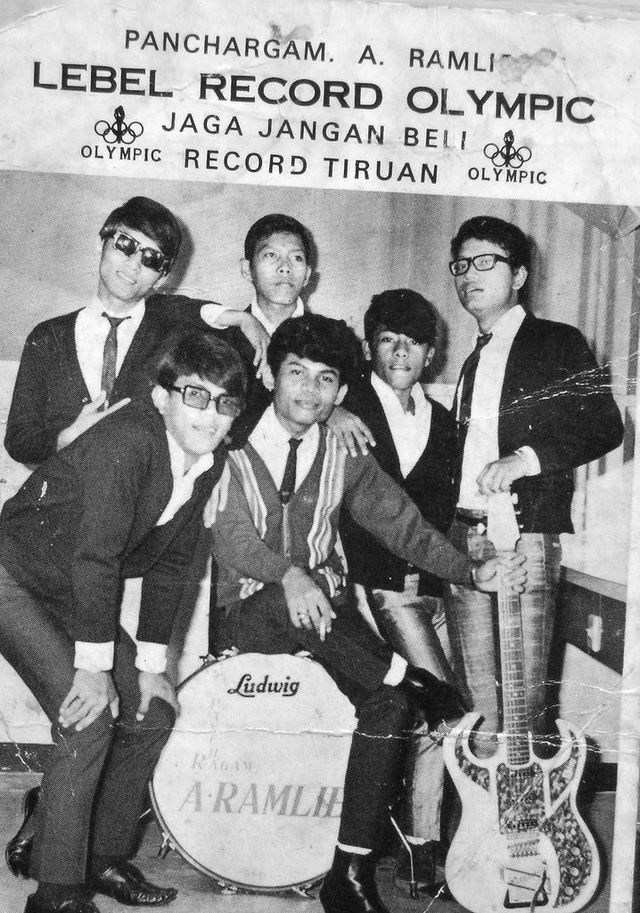 An anti-piracy ad featuring A. Ramlie, urging consumers to only buy original vinyl.

When The Rolling Stones came by for their gig at the Singapore Badminton Hall in 1965, Pop Yeh Yeh was in its heyday. But by the time the 70s’ came along, that style of music slowly started becoming passe when a new type of subculture began taking over in the aftermath of Woodstock. As the fashion and philosophy changed in the West, so did the music. The influence of psychedelic rock acts like Jefferson Airplane and Jimi Hendrix eventually trickled over to Singapore, leading to a drastic landscape change in terms of popular music tastes. And of course, the government began clamping down on rock music in general, directly causing a decade-long dormancy in the live music scene and the rapid decline of Singaporean bands.

Here’s a little 10-track playlist tribute to one of the most fun eras in Singapore music.