At 11 am, the Ebenex crew start to move equipment from their store at Bras Basah Complex. In solidarity dark t-shirts with 'Ebenex: Rock Star Dreams' printed on it, Operations Manager, Nash and two others are dragging large equipment cases across the terracotta tiles, the radio playing in the background.

These guys have been up from the early morning, Nash even slept overnight in the storeroom on some guitar cases to make the early call time. "Sometimes we're up from 5 or 6 am. Of course we prefer shows where setup is the day before so everything will run on efficiency - on the day of the event, everything is up and the artists get to rehearse and get used to the set up," David Ebenezer Toh, the founder of Ebenex Pte. Ltd. explains while also lending a hand with the equipment lugging, "I've seen some cases when the artists are playing a show on the day they land and when they reach the venue, they become overwhelmed! So we try to make any transition easier for them." 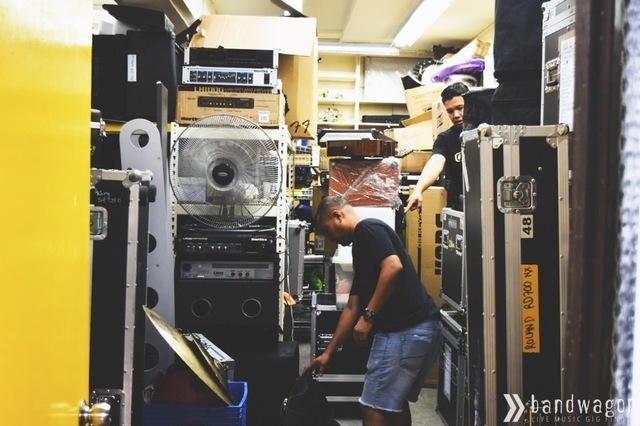 The Ebenex Select Shop is a musical instrument paradise, with new and used guitars, amplifiers, effects, keyboards and drums for sale, while another unit behind contains close to 100 flight cases of rental equipment. “Backline' would almost exclusively refer to audio amplification equipment that stands behind the band on stage. "We try our best to follow the rider as closely as we can, even if it means buying the specific gear sometimes," David says.

On that day, Ebenex Backline was in charge of providing the back line for The Devil Wears Prada show held at TAB that evening. "This is considered a mid-level sort of set up," David  while the crew rolled out a seemingly infinite number of hardcases on wheels. I began to wonder if it would take the whole afternoon.

The Devil Wears Prada are a Christian melodic metalcore (yes, that is a legit genre) band from Ohio. Most obviously, the show will get loud, with the usual smattering of stage diving and body surfing antics. I ask David if he is used to catering to a sort of genre when it comes to the backline. "We've done a lot of different productions, private and corporate events with and without musical instruments, larger scale productions like Mediacorp, MBS Theatre shows, Ignite! Rock Festival… even my wedding," he muses. 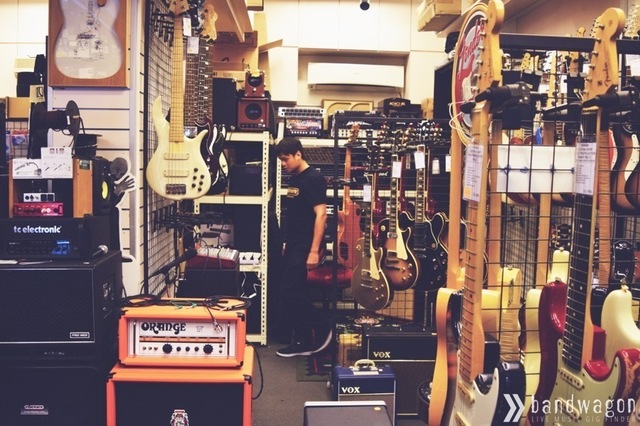 "Our biggest show yet was probably the Anugerah Planet Muzik in 2013, which is a sort of Grammy Awards for the Malay music community in Singapore, Brunei, Malaysia and Indonesia," David tells us. Nash chips in and said that the Jessie J private showcase, though not the largest, was the most 'technically challenging' gig the team had to handle. "We had a strict rule from the management about the rider that was to be no deviation from the list they sent. So we had to fulfil demands like having over 30 types of drum clamps," David adds.

They share a bit more on the most relaxed and fun gig (American Idol runner-up Adam Lambert), the mandopop shows that always require a lot of synthesisers, and recalls a massive gig they had to work on which they enjoyed and learnt from the most (Japanese rock band Luna Sea). "That was massive!" Nash says, "Each member of the band brought their own social media publicist and entourage." 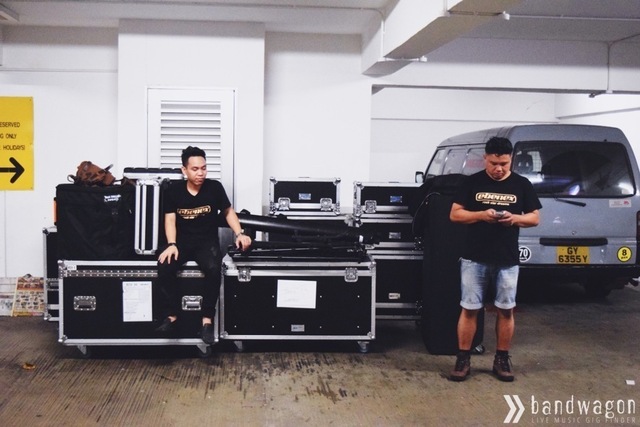 By then, all is packed and ready to go. We head to the basement carpark to wait for the transport. They were aiming to set up the equipment by late noon as the band were expected to arrive at TAB at 1.30pm. David, just like the crew is dressed in the same 'Rock Star Dreams' t-shirt and I asked what the significance of those words were.

He revealed that he had only expanded into the backline business for slightly over a year, partly due to Nash’s inspiration. Previously, since 2003, Ebenex only dabbled in sales from guitars, pedals and audio equipment (his most prized possession in the store up to date is a $12,500 Joe Satriani Ibanez Chrome Boy guitar). Nash who ran Four Tones Studio used to rent amps from David and had a lot of knowledge about the backline business. This led to a collaboration, which also meant that business would soon expand for Ebenex. "Just like our motto 'Rock Star Dreams', we want to get as close as we can to the action, to help rock stars achieve their dreams " David enthused.

Growing up, David had always been passionate in music but didn’t quite make the cut as a musician. "To be honest I didn't quite have a sense of rhythm and was a bit tone deaf! But in the end it was all fun" David said candidly. His musical endeavours followed him through university where he pursued his higher education in Sydney, Australia. "In uni I joined a band called The White Horse Company and we played around town, playing indie rock stuff such as The Hives, and pop-punk like Green Day and Sum 41. It didn't work out because I wasn't good enough. In fact, I got kicked out of the band!" he revealed. 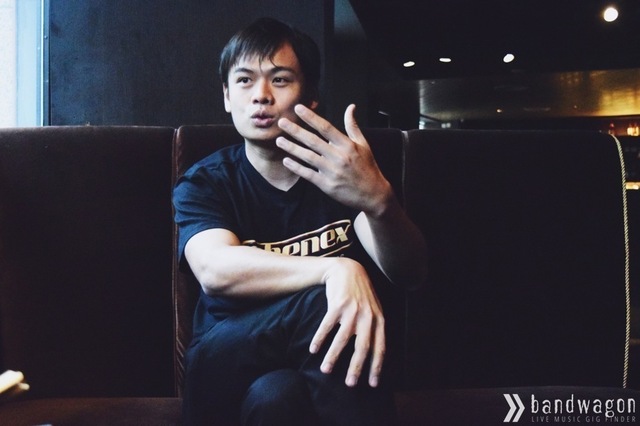 Feeling demoralised and slightly spiteful, he told the band that somehow he will still make it in the music industry. Little did he know that his rockstar dreams would not be in the limelight sort of stuff but in the sales and backline business. "So I wasn't much of a musician, but the next best thing I could do was to help these rockstars to fulfil their dreams," he says. David opened his first shop in Perth in 2003 after moving to the Western end of Australia post-university. For a year or so before he had to enlist in National Service, David made some business selling guitar effects pedals. This slowly proceeded to be an eBay business as it was easier for him to manage things on his own. And when he was done with that, he opened a small shop in Roxy Square (Katong) in 2006 specialising in pedals. Business flourished and soon he moved to a bigger space, also in Katong in 2007, where he made his first breakthrough when he founded Blackwood Guitars, a high-end guitar boutique in 2008. In 2011, Blackwood Guitars was closed and Ebenex took over all operations at its current location at #04-47, Bras Basah Complex.

Before committing fully as backline providers, David was already aware of how important the market was and had already begun to invest in amps, high-level audio equipment, drums and an assortment of instruments to rent to whomever needs them. In this period, David saw himself acquainted with the local music scene that was thriving, when artists themselves would go to his shop for gear and him in return would attend the gigs. Years later, like serendipity, this was how he got to where he was by meeting Nash.

By late noon, the team was already hard at work at TAB setting up and liaising with the sound man. I took in the empty surroundings of TAB as I knew that it was going to be packed like sardines later. The crew talked and joked about lunch and drinks while working through unpacking the cases and waddling in a lengthy amount of wires. Everyone seemed so relaxed and setting up looked effortless to the experienced team. 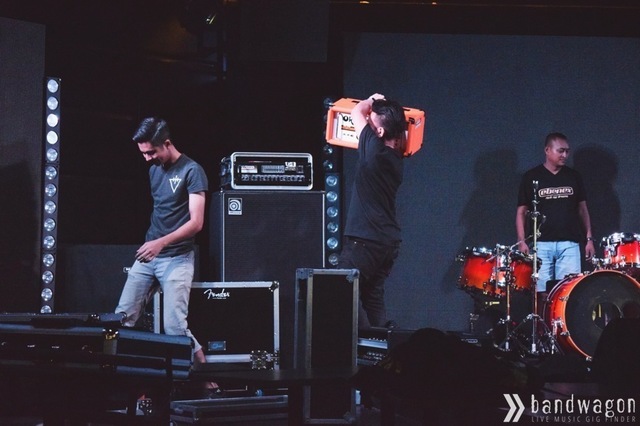 What I've learnt, setting up almost always takes longer than taking down the set up. Nash explains that the sense of urgency post-show is always heightened as there are issues such as venue rental to consider. "The longer you take to derig, the more money it is," he says. Nash tells us that the team took only two hours to take down the set up for the opening act of mega Metallica show last year as opposed to the three days it took to set up. "The job is also physically demanding," David says and he and Nash relates an incident on New Year's Eve where him and Nash were the only two handling equipment for Filipino band Rivermaya.

January was barely over and the number of shows Ebenex has worked on tallied up to seven. David lit up as he talked about possible projects in the future and the upcoming KittyWu show with Irish math-rock band And So I Watched You From Afar. "Our target for this year is 60 shows!" he says.

"I'm trying to raise the standard of the backline service in Singapore. There are always stories about how people have complained that the backline here is poor but I want to change that. How we have functioned so far, we try to match the tech rider as closely as possible, and with most of my team musicians themselves, we try to be as professional as we can ensuring the best sonic experience a gig-goer can enjoy," David says. 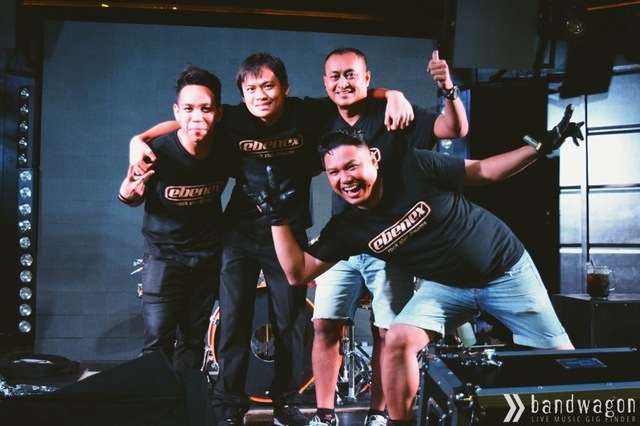 Of the 'tech guy' or the 'sound guy' stereotypes, David is fully aware. "People sort of see us as the ones just bringing up the amplifiers, but there's a lot more of that. A big part of the job is understanding the artists' requirements and balancing that out with what is suitable with the venue. There's a lot of coordination work that goes on behind the scenes that people don't see, and when things go wrong, we are at the frontline with the artist getting the blame. That is why it's important to develop 'thick skin' in this business!"

David also attributes a lot of his work ethics to their backline counterparts in Malaysia, Peter Frankfort. When Jackson 5 (or The Jacksons) were here in Singapore in 2012, Ebenex was supporting manpower to Peter Frankfort. He says, "It was things I learnt like dress all black, never mingle with the artist, you're there to work not ask for autographs and photographs, and socialise. I also learnt about handling equipment, to service them regularly and the sorts." 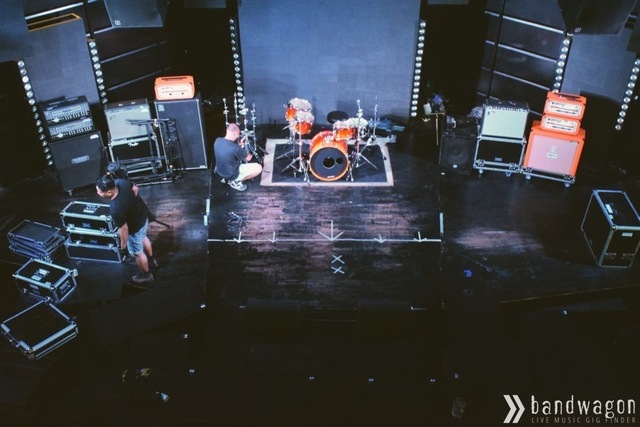 Soon there is a buzz all around and the band was about to arrive and it was time to take our leave. David and the team were back on their feet to the setting up. Oh how different would the place look in a few hours when we returned that night for The Devil Wears Prada.

Back at TAB at 7pm, it was a raucous situation. David was standing at the back nodding his head to the music. Nash and crew were on standby backstage. Frontman of TDWP, Mike Hranica had already made the stage his stomping ground in his hockey jersey, the floor a sea of writhing moshing bodies. 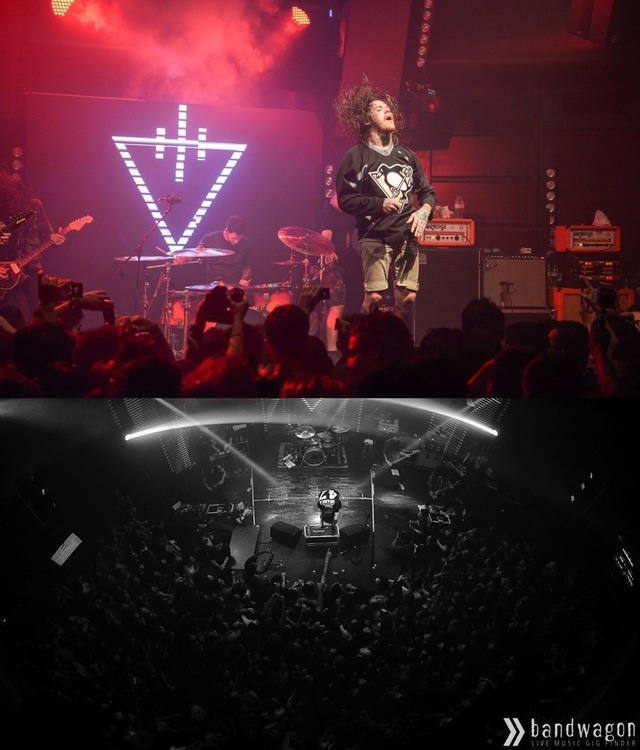 Most importantly, every song executed sounded amazing and seemed to fuel the crowd even more. True enough, body surfing and repeated stage diving, and even going shirtless antics ensued. David went to the second level to take an overhead picture with his camera phone. It was a short gig, but it was an exceptional one.

Spending morning to night following the backline crew to a show left me with a greater appreciation of their work. It is easy to pass comments about the sound being bad at a show, or the sound guy not understanding the artist, but it is quite clear that they are a part of the show as much as the performing artist. It is safe to say that if not for folks like the Ebenex team, the live music landscape in Singapore won't be as good as it is today. Sure there is always room for improvement, but right now we are in pretty good hands. 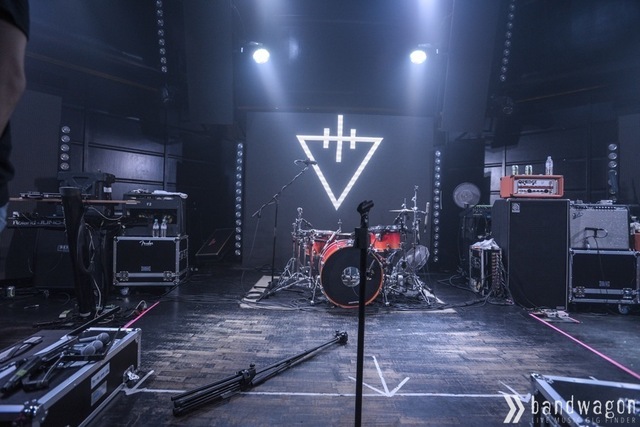 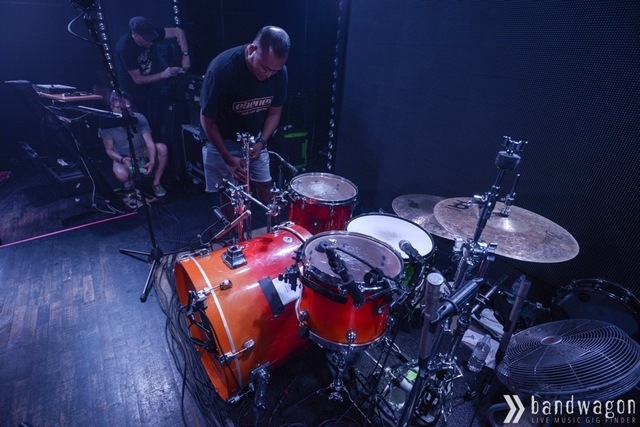 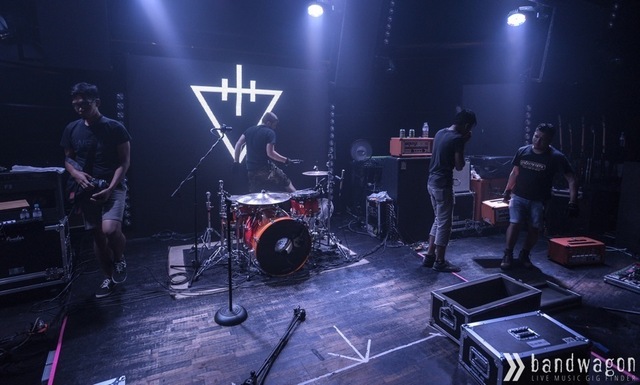 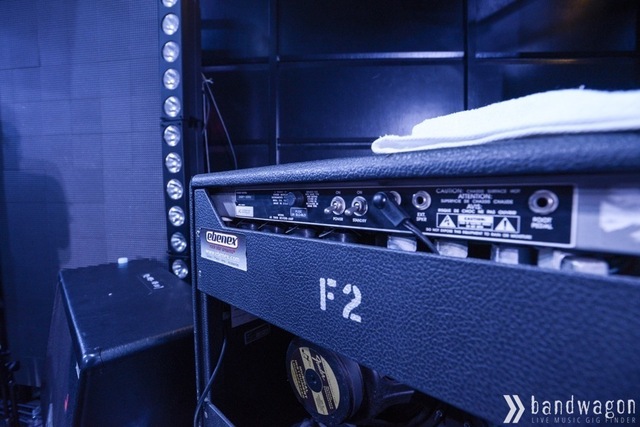