So Thrice went into hiatus. One of the most dynamic, sonically intriguing and, in my opinion, one of the most significant bands in the post-hardcore scene took a break from being a full-time band to spend more time with their families. The OC-based four-piece announced their hiatus in November last year and just completed their Farewell tour that ended in their hometown in California, ending a memorable 13 years of musical career, spanning 8 full-length releases, aside from B-sides and live recordings.

Thrice has meant a lot to me throughout my years. As someone who writes about music (and is pretty damn knowledgeable about it), naturally I am obsessed with it. It bleeds out into every facet of my identity and my lifestyle, and this hunger for consuming music can be attributed to the introduction of Thrice when I was 16, listening to The Artist In The Ambulance for the first time. We were all in the phase where our notions of rock were shaped by 98.7 FM and MTV - punk rock was Blink 182 and Sum 41, metal was Linkin Park and Metallica. But when a friend of mine introduced me to Thrice, it dawned on me what rock music can be, and what it should be: an intellectual and emotional release. It made me pick up guitar, discover new, lesser known bands and form a band myself, getting involved in the local scene. Essentially Thrice lead me to where I am right now - a writer and proponent of good music.

Thrice is just one of those bands which I can find very little fault in - their albums just keep getting better and better over the years and the band members Dustin, Teppei, Ed and Riley all work so seamlessly together to contribute to this grand, epic sound. It’s no wonder they’ve become an example of a band that can achieve relative success without compromising the direction of their music.

Fans of Thrice will always be fans of Thrice, says Scott Heisel of Alternative Press Magazine:

"From the beginning, there was nothing to get behind other than the music—no larger-than-life personality or crazy antics. The band didn't ever come off too self-involved; it has always been about the music. That is what is so exciting about them. If you're a fan of Thrice, you're always going to like them because they're always going to deliver consistently fantastic albums."

How did they amass such intensely devoted fans throughout their career? If I had to put it down to a word, it is this: Progression. 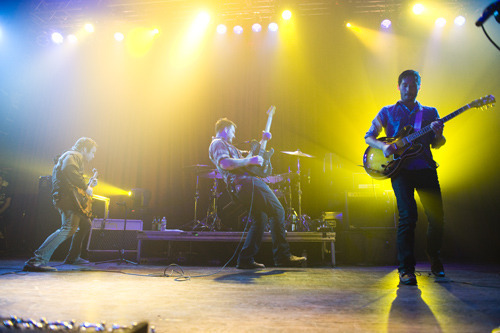 Their progression as a band is something the likes of which very few bands have ever achieved. I can even go so far as to call them the Radiohead of post-hardcore bands; that’s how talented they are. I really like them for their ability to grow with their fans, grow up as people and as musicians. Jason Tate, founder of the site AbsolutePunk.net agrees:

"They evolved with their listeners; as members of the band got older, people listening to them got older, too... I don't listen to Illusion of Safety today, but Major/Minor still speaks to me on that same level."

In order to remain relevant, musicians need to grow and progress past their previous endeavors. As a rabid fan of Linkin Park during my teenage years (so sue me, sometimes I still listen to Hybrid Theory) I was sorely disappointed by their return from hiatus with Minutes to Midnight. It featured the same, tired formula of verse-chorus-bridge-chorus song structures, and their musicianship didn’t improve that much anyway. There was very little progress; Linkin Park forgot that their old fans had already grown up and were looking for something more sonically stimulating, not something that was appealing to the inexperienced ears of the pre-pubescent masses.

In fact, so many other bands from our yesteryears suffered the same fate. Yellowcard, Evanescence, Korn - they all dropped out of our radars due to their failure to evolve past their artistic comfort zone. Which is why Thrice remains so exciting, they grew up along with their fans.

In the early years of Thrice’s formation, their music was best described as punk rock – fast paced, heavily distorted guitars and soaring vocals (with yelling sometimes thrown in the mix). What I like about those years was their rapid-fire energetic sound combined with lead vocalist Dustin’s honest, heartfelt lyrics. And it helps that he can really sing as well.

From the beginning with Identity Crisis and later on with Ilusion of Safety, the followers of the post-hardcore scene, (me included) already knew that Thrice was a little different from all the other bands that saturated the scene at that time (bands such as Alexisonfire, Brand New, Underoath etc etc). The music was harder, faster and more complex than any other band we’ve heard during those years. It was more technical too - the song 'Trust' for instance played around with delayed time signatures, something unheard of in usual post-hardcore fare. A mix of technical proficiency and intellectual density.

Of course, we teenagers were drawn to the passionate, catchy and ultimately melodic sounds of Thrice. Thematically, they dealt with the usual motifs of love and loss, the worst things ever to affect a teenager. Dustin’s combination of pensive lyrics and passionate vocals created personal kinship between us and the already powerful music. Just try listening to 'Deadbolt' and 'To Awake And Avenge The Dead'.

Then came The Artist In The Ambulance in 2003, a solid, non-stop post-hardcore phenomenon that everyone worth their musical salt absolutely loved. It was satisfyingly dark, filled with emotional moments and adrenal drive. It was everything that I liked about their earlier years; moving beauty underneath abrasive melodies.

As the band matured, so did their music; they got exponentially better in blending different musical influences and styles into their sound. By their fourth album, Vheissu, they settled into the sound of Thrice that I know of today – experimental, intensely melodic and comfortably cathartic.

In Vheissu, they refused to repeat their success of their previous three albums. They now aimed for more epic sensibilities; experimenting with atmosphere, dynamics and newer instruments. They moved past their post-hardcore label and became something more than that - a really good progressive rock band. Though their songs still had that trademark Thrice ferocity, they featured a more mature sound that was accessible to even fans of other genres. 'The Earth Will Shake' had a post-metal feel to it, something like what ISIS would play. 'Atlantic' had a more electronic and hazy feel to it, almost trip-hoppy in essence.

Thematically, they were grander. Songs such as 'Atlantic', 'Of Dust and Nations', and 'Red Sky' all dealt with ambitious nautical and apocalyptic scenarios and motifs, breaking whatever expectations that fans had of their music. And man, did we love Thrice for making Vheissu.

Then they decided to create something else. The Alchemy Index.

It was an ambitious project by the band to capture and reflect all their different styles and genres by compartmentalizing them into 4 separate EPs. And to make it even more grandiose each EP was to represent the different elements of nature, namely Fire, Water, Earth and Air. So you could probably deduce each album’s sound – the Fire EP entails aggression, dissonance and passion; Water EP characterizes the soothing, pensive and lush nature of water. The Air EP of course has a very airy, very light tone while the Earth EP was stripped to the bare minimum, the most basic of sounds: acoustic songs with folkish vibes.

The last track in each of those EPs are written in a Shakespearean sonnet form (14 lines, 'volta' in the couplet). The sonnets each embody the connection between man and the respective element. In the last two lines, as a volta, the personification of each element would sum up their relationship with man from their own point of view. I know, #deep.

The sonnet for the Air EP, 'Silver Wings', just might be the most perfect song I have ever heard in my life thus far. It is INTENSELY beautiful because of Thrice’s attention to detail; the lushness, the organic vocal harmonies and malleability of the tone perfectly captures the very essence of air itself. Very progressive stuff for a band that used to be the staple of punk rock enthusiasts.

After the magnificent project of The Alchemy Index, how could they ever top themselves. Thrice manages.

Departing from their experimental phase, they settled into a more organic and maturer sound that was ingrained in Beggars and Major/Minor. I guess with all the experimentation with Vheissu and The Alchemy Index, Thrice finally found the sound that they liked and settled into it. A steady intensity that shines through well-crafted songs.

Their songs were more stripped down and created a more band-centric album that featured a much older Thrice; mature adults with adult problems and issues. The anguish reflected in the songs are more silent, more reflective, found in songs such as 'In Exile' and 'Promises'. Thundering riffs were replaced with piano keys, screaming vocals were replaced with powerful croons. Ambitious concepts were abandoned - the older Thrice just wanted to make straightforward, well written songs. And we Thrice fans are completely comfortable with this, it’s still the Thrice that we know and love. Because by now, we already know that Thrice can do no wrong, no matter what direction they tread.

So why am I writing about Thrice here? This goes out to all the aspiring musicians and bands here who want to create good music. The lesson to learn here is this - never ever stop improving yourselves. Always challenge yourselves to do better in every effort. True fans will appreciate your sense of progress, they’ll never fault you for trying to advance past the old sound. The quality that places Thrice into the domain of the legendary is that they are unafraid. Unafraid to challenge labels and move beyond expectations, to experiment and relentlessly look for new avenues in a quest to craft their own truly uniqe sound.

Maybe who knows, you’ll be just like them - a band that changes lives, a band that is able to give us something truly new, truly original with every release.