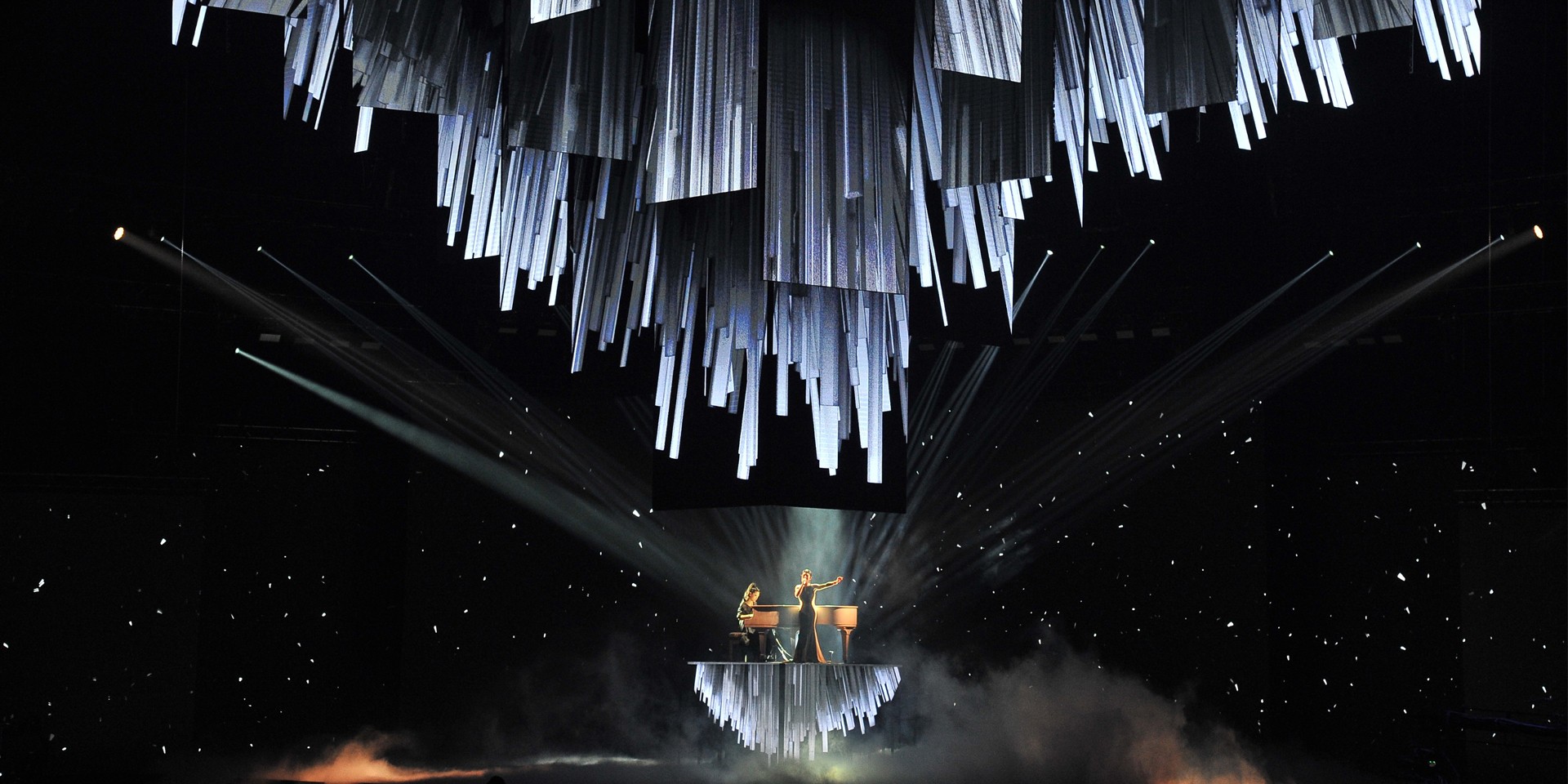 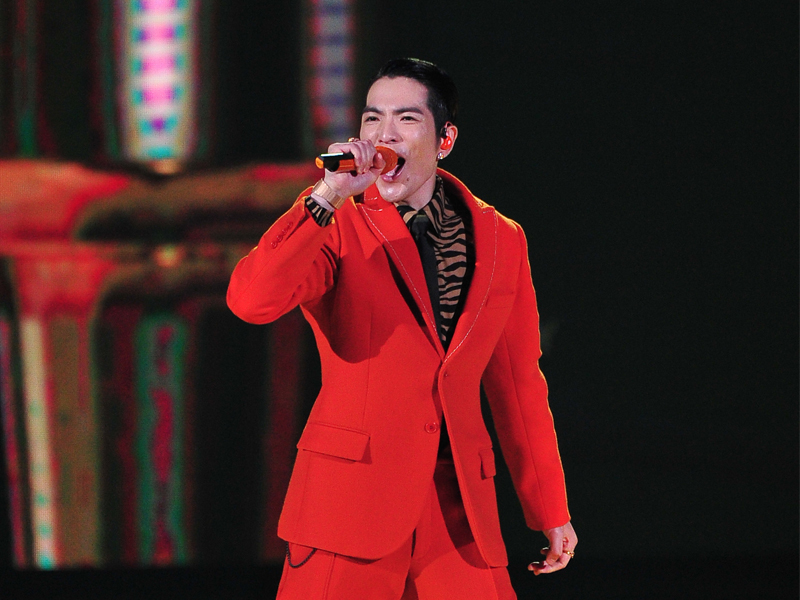 Many were surprised when rock star Jam Hsiao was announced as the host for this year’s awards. The move was seen as risky as the singer was well-known for being extremely conversation-shy in his early days.

The gamble paid off as Hsiao had many tricks up his sleeve to wow the audience last night. From acing the opening act where he performed a medley of songs from several award nominees to painting an upside-down portrait of rock legend Julie Su on the spot during her tribute, Hsiao showed off his many talents to the audience.

As many fans expected, Hsiao’s hosting was rather awkward and he seemed uncomfortable while addressing the audience. However, his friendly banter with the nominated stars, many of whom he personally knows, felt very genuine and unstaged, and many awkward interactions made for funny moments throughout the night. At one point, when asked by former F.I.R. frontwoman Faye about his sudden chattiness, Hsiao exclaimed, “I was forced! I don’t want this!”

Speaking to journalists after the event, Hsiao did say that he will not consider hosting again in the short run. 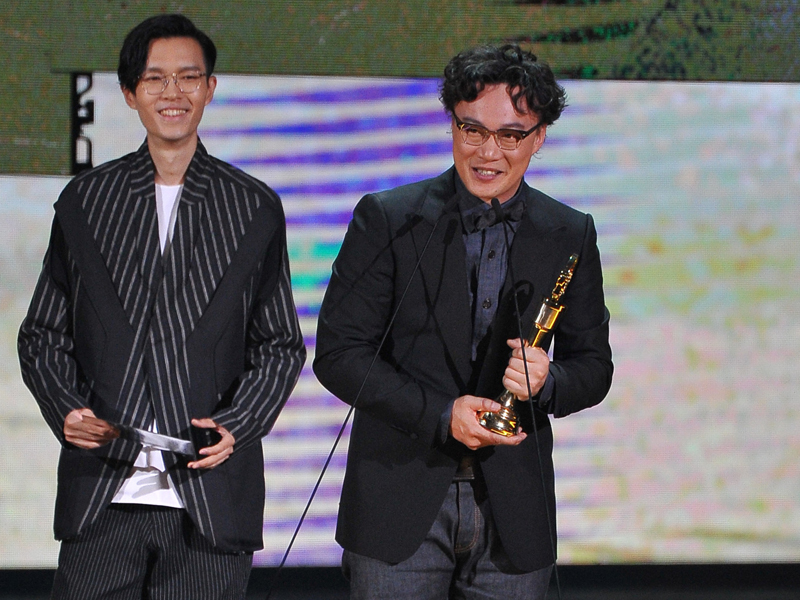 In every year’s Golden Melody Awards, the Best Mandarin Male and Female Singer awards are the most sought after. The two awards were taken home by Hong Kong singer Eason Chan and Taiwanese singer-songwriter Lala Hsu respectively.

While many fans expected the Best Male Singer award to be a competition between Singaporean singer JJ Lin and Taiwanese R&B singer Xiao Yu, Eason Chan was a surprise winner with his album C’mon In~. Even the singer himself looked shocked when called upon, but he did not hide his excitement, taking his time to thank everyone involved.

The singer said, “Taiwan’s audiences and judges have always shown me a lot of love, and I’m very grateful for this.” This is Chan’s third Best Male Singer award, making him the most successful singer in this category. He also won the Album of the Year award later on. 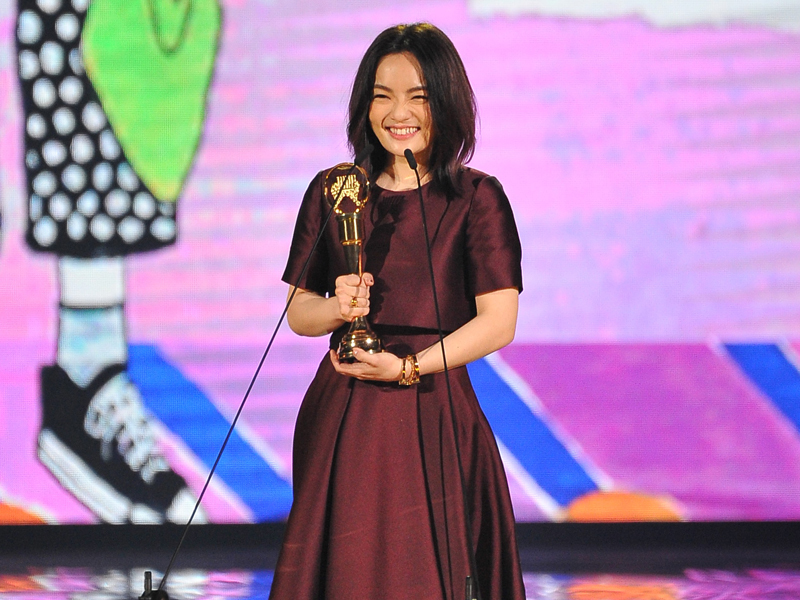 On the other hand, Lala Hsu defeated iconic singer A-Mei to win the Best Female Singer award for the first time with her fifth album The Inner Me. She also went on to win the Best Mandarin Album award. Speaking to reporters backstage, Hsu said, “I’m still very shaken, and I’m still trying to make sense of it. But I’m very touched and very grateful for this.” 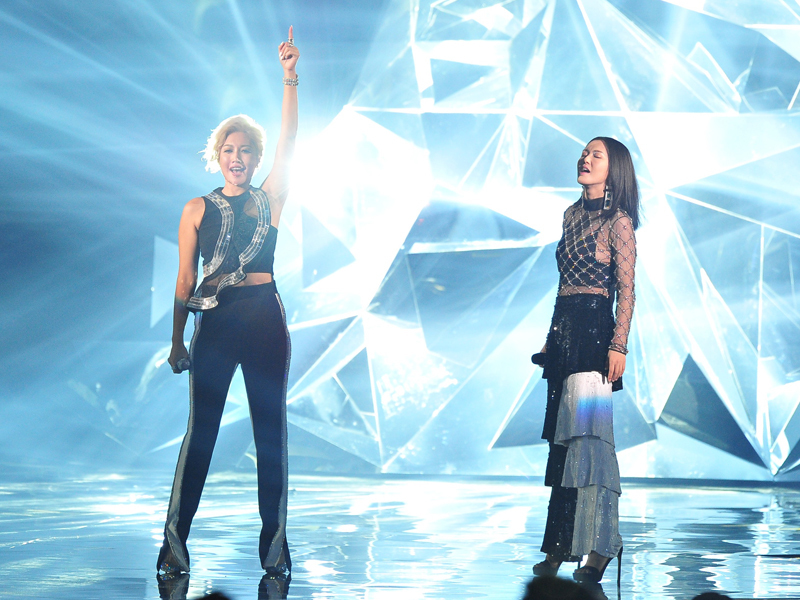 One of the best performances of the night came from a collaboration between two powerhouses, Taiwanese singer A-Lin and Chinese singer Sitar Tan.

The two singers performed a medley of classic Mandopop songs from the 80s and 90s, and the act was well-received by fans, who were particularly impressed by the powerful vocals of the two singers.

While many Taiwanese singers are seeking greener pastures in Mainland China in recent years, this was a rare moment where a top singer from Mainland China performed across the straits.

It is also notable that there are many singers and musicians hailing from Mainland China who were nominated for awards this year, including Leon Zheng and Dean Ting for Best Newcomer and Best Mandarin Album, and Chang Shilei for Best Arrangement. 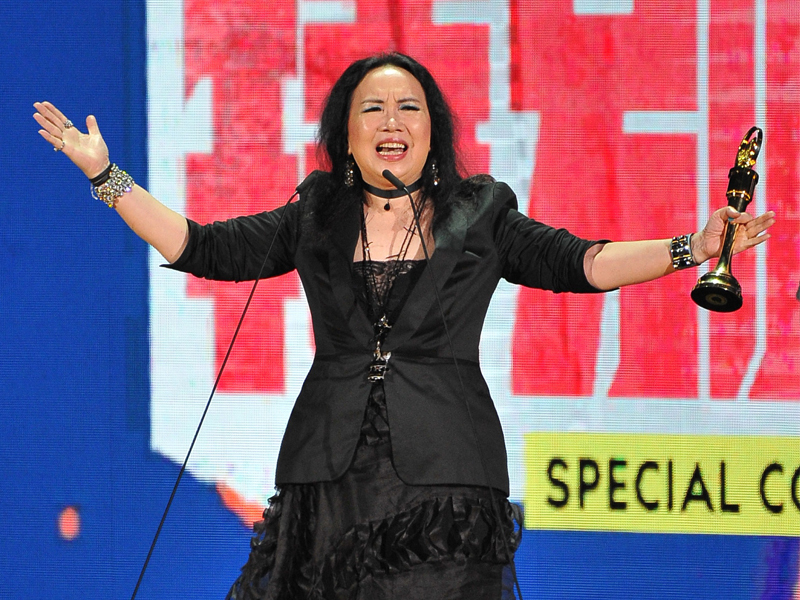 One of the awards given out during the night was the Special Contribution Award to rock legend Julie Su for her achievements. The 66-year-old veteran made her debut in 1983 and is an inspiration to many rockers in Mandopop. At one point, her popularity was comparable to that of the iconic Teresa Teng.

The tribute began with host Jam Hsiao painting a portrait of her, a feat that he claimed to have practiced at least a hundred times. Then, last year’s Best Female Singer Eve Ai came on stage to perform a series of Julie Su’s most classic songs.

Su has kept a low profile in recent years, and remained coy when asked by reporters about releasing new music or holding more concerts. She said: “I don’t dare to say how I will continue with my career, because I don’t know how long more I can sing for. We’ll see if there are any songs that can touch me. I value my freedom and dislike the pressure, but I would like to thank the fans who wish for me to perform more.” 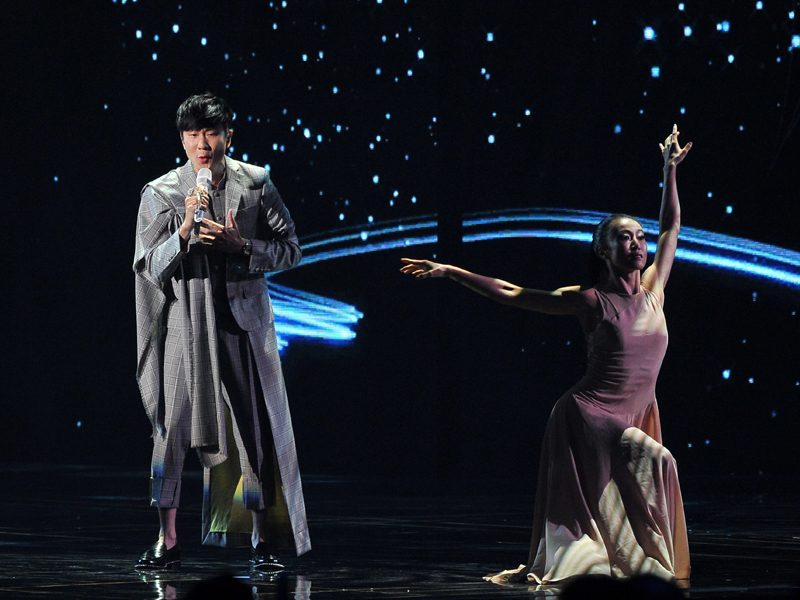 JJ Lin and A-Mei left empty-handed despite most nominations

At this year’s awards, the two singers with the most nominations were Singaporean singer JJ Lin and Taiwanese icon A-Mei, with six nominations each. However, both were left disappointed at the end of the night.

JJ Lin did not take home any of the awards he was nominated for, despite much fanfare for his successful album Little Big Us, and a memorable performance at the end of the show. A-Mei performed slightly better, with a win for Best Music Video for her song ‘Left Behind’, though this was more of a win for director Lo Ging-zim rather than the singer herself. 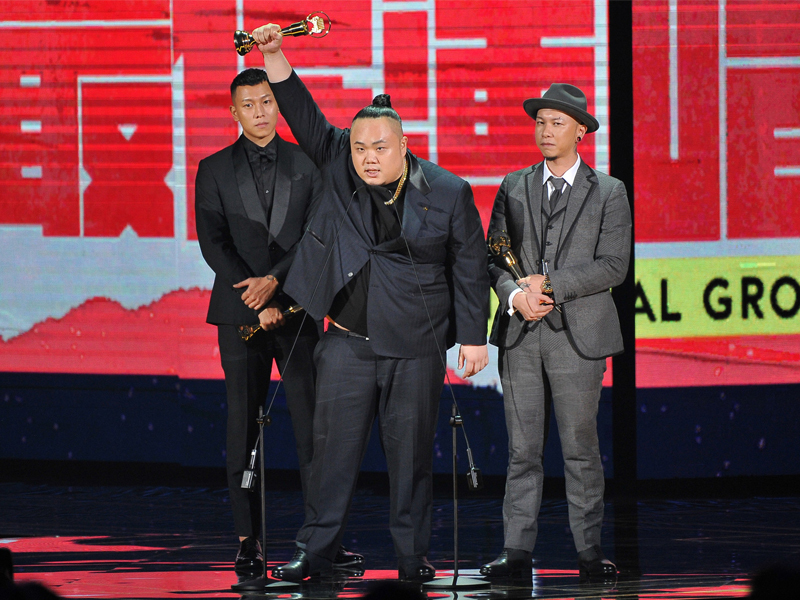 10 years after their debut, Taiwanese rap group MJ116 is enjoying the best year of their music career. The trio had just managed to sell out their two-day concert at the Taipei Arena within three minutes earlier this month, and were awarded the Best Group award at the recent Hito Music Awards.

At the Golden Melody Awards, they continued their success with a win in the competitive Best Vocal Collaboration category for the first time with their album Big Thing, beating out favourites Chang and Lee.

After winning the award, MJ116 member E-SO revealed that many people had doubts about the group when they decided to go on the rap genre 10 years ago, at a time when ballads and pop music were considered more popular options. Winning the award is an important milestone for the band and feels like a validation for all the people who have supported them all these years. 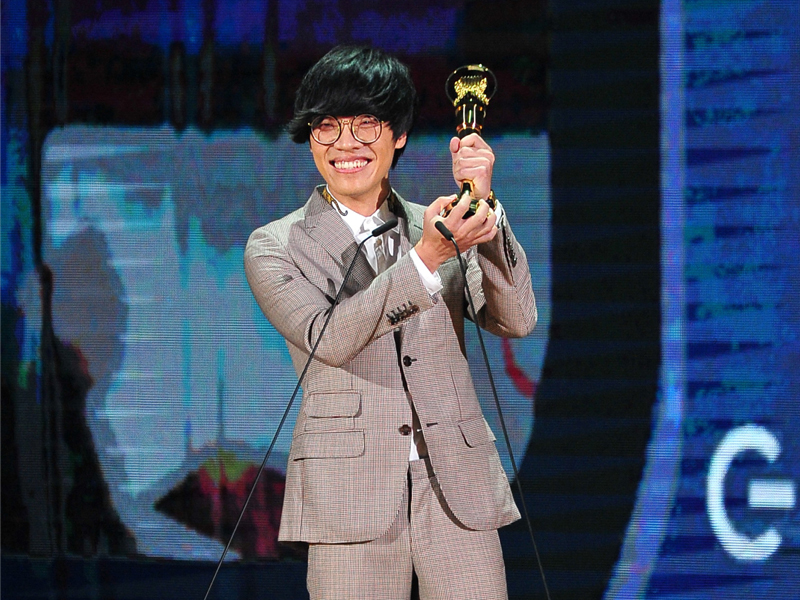 Album of the Year: C’mon In~ (Eason Chan)