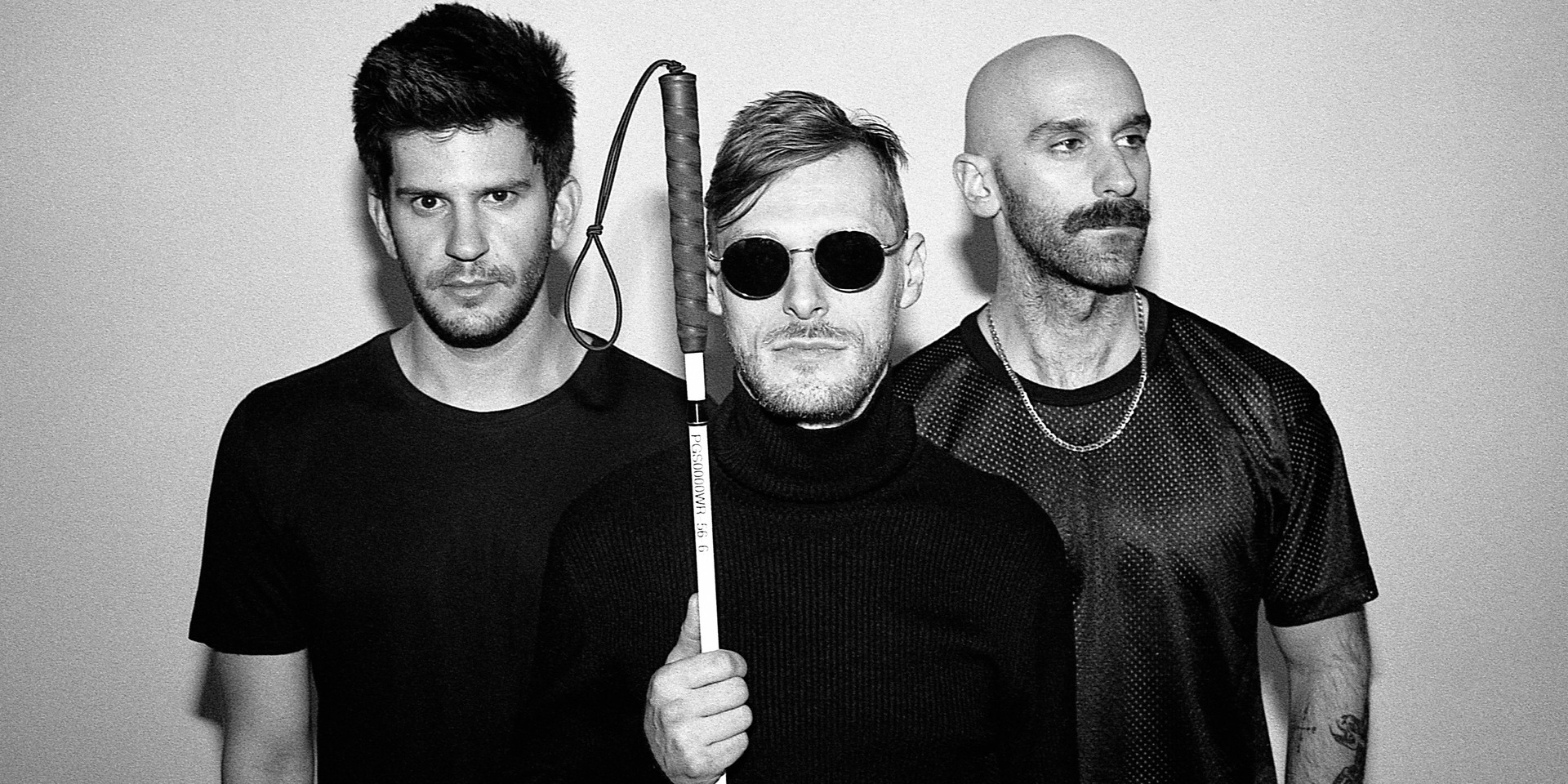 In February next year, the X Ambassadors will play their first-ever show in Singapore, as part of their ORION Tour.

In the scale and sweep of the New York band's body of work, lies an enthralling multitude of sounds that the band has merged into a gloriously resounding sonic signature with a genre-blasting appeal. Whether it's pop or the blues, Sam Harris, Casey Harris and Adam Levin, venture boldly and majestically, mining from isolated canons the raw material they need for their maximal anthems that are sugar to the ears and manna for the soul.

Ahead of the band's show at the Capitol Theatre, we celebrate nine especially resounding and vital moments – in message and sound – from its discography.

In 2016, the X Ambassadors’ distinct maximal pop sensibility intersected with the almighty guitar chops of Rage Against the Machine’s Tom Morello. The resulting song, ‘Collider’, is an arena-shaking monster of an anthem with titanic riffs, booming drums and irresistible groove. Frontman Sam Harris’ astoundingly elastic voice, that effortlessly radiates high drama, is both instrument and guide, leading the track on its build-and-release thrust.

Here, the X Ambassadors showcase their uncanny understanding of the value of power accrued through rhythm. ‘Collider’ is a masterclass in the art of escalation. Harris’ narrative of an apocalyptic love story is an already high-stakes ingredient, as is his sweeping vocal range. But when the action in this song rises to its stratospheric peak, it’s not impossible to imagine the foundations of stadiums quavering.

Self-reckoning is never easy. But on ‘Low Life 2.0’, the X Ambassadors attempt – and ultimately, achieve – an existentially resounding feat. Sam Harris’ devastating opener, ‘I'm nothing but a low life / Thinking 'bout my own life’, sets the stage for the tidal wave to come. Invoking the blues, the most moving and emotive record of the human capacity for transcendence, the band enlists guests artists Jamie N Commons and A$AP Ferg to share their stories as well, which they do exquisitely.

The British gospel singer Jamie N Commons, himself steeped in the Chicago blues tradition, after having spent his youth there, outlines what it means to want to live as a good person in the world, while Ferg reveals some devastating details about a family member. Gone is his boisterous, off-the-rails flow: This time, his delivery is solemn, a bracing accent to the gravity of the song.

Simply put, this song celebrates the hustle. It’s a nod to the fact that the X Ambassadors have “got their eyes on the future” and have arduously toiled for a better tomorrow. Even though rockstar excess is the last thing this song campaigns for, Imagine Dragons, one of the biggest bands in the planet, chimes in heavily on this song. To its executive producer credit, we must add the frantic drum and bass back beat and the glorious marshalling of teeming sounds that never feels overdone. This is the antidote to the prison sentence that is inertia.

Remember: “The fuel will keep the fire alive”.

One of X Ambassadors' biggest strengths lies in their ability to switch up their sound at any given time. While the band is known for its eclectic and energetic sounds, 'Renegades' takes on a meditative, more choral sound, and does so flawlessly. There's no doubt about its place as a fan-favourite.

Leaning on folk, with heavy usage of acoustic guitars, gang vocals and thumping percussions, the track showcases the band's ability to write incredibly strong songs that veer away from mundane formulas.

'Optimistic' is one of X Ambassadors' most urgent tracks, given its subject matter: Gun violence in America.

Despite its heavy topicality, the band draws you in with infectious melodies, and bracing distorted guitars that never let up. It's a brutally honest track, as lead singer admits that he and his wife debated over having kids in America's current climate, but tries to remain optimistic.

It's hard to keep your head up when you have to live with sentiments like this: "So don't tell me everything's alright / I'm tryin' so hard not to scream". Thankfully, the band's musicianship makes this a lot easier, cushioning the blow with a raw, almost healing power. The single's urgency, coupled with its punk-like tendencies, results in one of X Ambassadors' best tracks yet.

One of X Ambassadors' newest tunes, 'BOOM' was released in June this year, on the band's second album ORION. Led by a thick bassline, 'BOOM' is a lively cut that sees the band tackle toxic relationships. As the drums and punchy electric guitar join the fray, the song swings into overdrive, and gets stuck in your head, thanks to its catchy chorus and vibe.

'BOOM' explores the lighter side of X Ambassadors, while effortlessly showing off the fact that the band hasn't lost its footing after a decade in the industry.

‘Unsteady’ is a heart-wrenching X Ambassadors classic. It was unveiled as the third single off the band’s debut album VHS. It is a four-time Platinum winner and it was nominated for the Top Rock Song at the 2017 Billboard Music Awards. The Erich Lee Gravity remix of this track has been featured in the TV series Lucifer and the romantic drama film Me Before You.

Sam Harris’s vocals, brimming with an unapologetic rawness, soar above lush instrumentals, marked with pounding drum kicks and affecting orchestral elements. Emotional from start to finish, this track is a desperate plea and a cry for help, in hopes that someone can listen and share this pain. The final “a little unsteady” echoes too-loud in the sonic limbo, devoid of instrumental support, and the ache lingers on.

‘Jungle’, the 17th track off the band’s first studio album VHS, is a thumping alternative-rock, electronic-influenced anthem about overcoming adversity. In collaboration with Jamie N Commons, the band declares, with growling vocals, to the world its refusal to back down.

Riding on the momentum of aggressive beats and exuberant background vocals, ‘Jungle’ starts off powerfully and propels itself towards an arresting climax. The empowering visual for this track, featuring members of various subcultures in Los Angeles, amplifies the underlying message in the track – a rallying call for the world's underdogs.

‘Home’ is a dedication to the displaced and the oppressed. Replete with emotional hooks filled with longing and despair, this track is a balancing act between hope and devastation. Released as a single, this track was featured on Netflix film Bright, making it David Ayer's second film to feature X Ambassadors on its soundtrack.

The haunting message cuts through powerfully with the aggression and desperation in Machine Gun Kelly’s hard-hitting verses, tinged with a tenderness in Bebe Rexha’s spellbinding vocals. The poetics in this track – “Home / A place where I can go / To take this off my shoulders / Someone take me home” – resound spectacularly till the very end.

Check out our specially curated playlist featuring our top 9 X Ambassadors songs below.

X Ambassadors / The ORION tour Singapore is set to be held at the Capitol Theatre on Tuesday, 18 February 2020, 8pm.

Tickets are priced at $118 and can be found here.