His radio show on Jam 88.3 ‘Fresh Filter’ now has a vinyl compilation album — the baby if you will — and Davis has invited people to the christening. The Satchmi store probably feels like a nursery of sorts for Davis as copies of Fresh Filter Vol. 1 are neatly displayed on a wooden rack near the entrance and curious record shoppers peruse the specimens. It is a Friday evening, traffic has already turtled along EDSA and the sky is slightly darker than usual, filled by clouds pregnant with rain. The launch is scheduled to begin at 6pm; the first performing guests Autotelic are already tuning up but second performer Bullet Dumas are still in traffic.

Davis is worried about audience attendance, concerned that even the performers might not make it.

Davis’ radio show focuses on new Philippine indie musicians. He is progressively earning a reputation as a passionate tastemaker. He handpicked the 12 artistes on the compilation for the Satchmi launch: Autotelic, Library Kids, A Problem Like Maria, Ourselves The Elves, and Bullet Dumas, providing acoustic performances for the launch. Davis will then visit Saguijo on May 29, A Space on June 12, and Cubao Expo on June 26. For the final date, he hopes to bring all 12 acts to perform live: the aforementioned plus the Ransom Collective, Flying Ipis and a whole list of emerging talents. 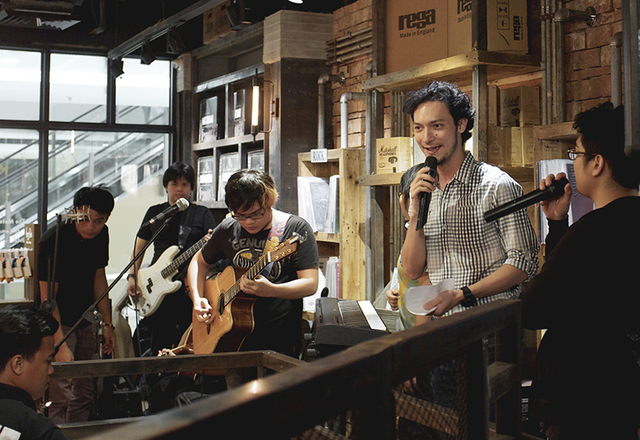 It is a daunting endeavour that Davis has been concerned with for months but at least the vinyl record is finally available — the recordings were finished and downloadable as mp3s as early as the last quarter of 2014. The vinyl version addresses the rising rediscovery of the analog format and includes a sheet filled with track information and endorsements from local musicians and music scribes.

Each of the songs are tuneful and well-produced; highlights include Autotelic’s haunting/soaring/driving 'Misteryoso', the gleeful synth-pop of BP Valenzuela’s 'Pretty Car', The Ransom Collective’s jumpy folkisms on 'Fools' and Yolanda Moon’s moody brooding jazzy 'Pasensya'. The collection was well-programmed like a tasteful radio playlist. 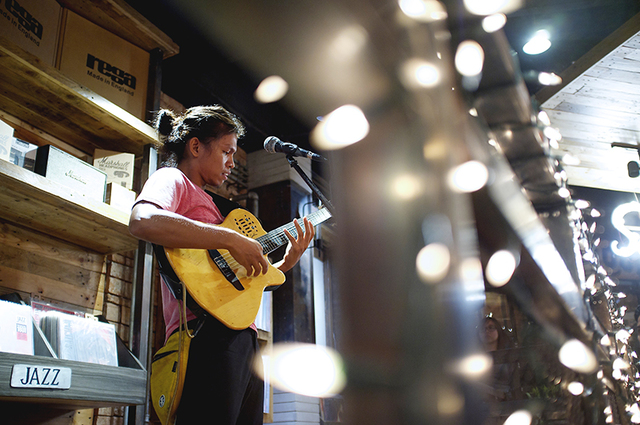 The Satchmi store was filled by the time Autotelic took to the makeshift stage, and Davis was able to relax and play host along with fellow Jam 88.3 DJ Jobim Javier. Bullet Dumas, who arrived just as Autotelic began their 30 minute set, himself delivered a powerful set filled with propulsive odd-metered strumming and unpredictable yet melodic hooks that had every ear (and eye) paying attention. The in-store audience was attentive for all the performances, smartphones mostly tucked away — a refreshing (and encouraging) sign that, much like the old-school vinyl record listening experience, the attendees were soaking up every nuance.

It was all about the music, not just a social event.

Davis now can’t stop smiling, and why not? He did right by choosing the twelve artistes for the compilation, all offering, well. fresh approaches (even if some are re-appraisals of older forms) to local music. In the confines of Satchmi, it was clear the audience is listening — hopefully, they’ll be buying too.