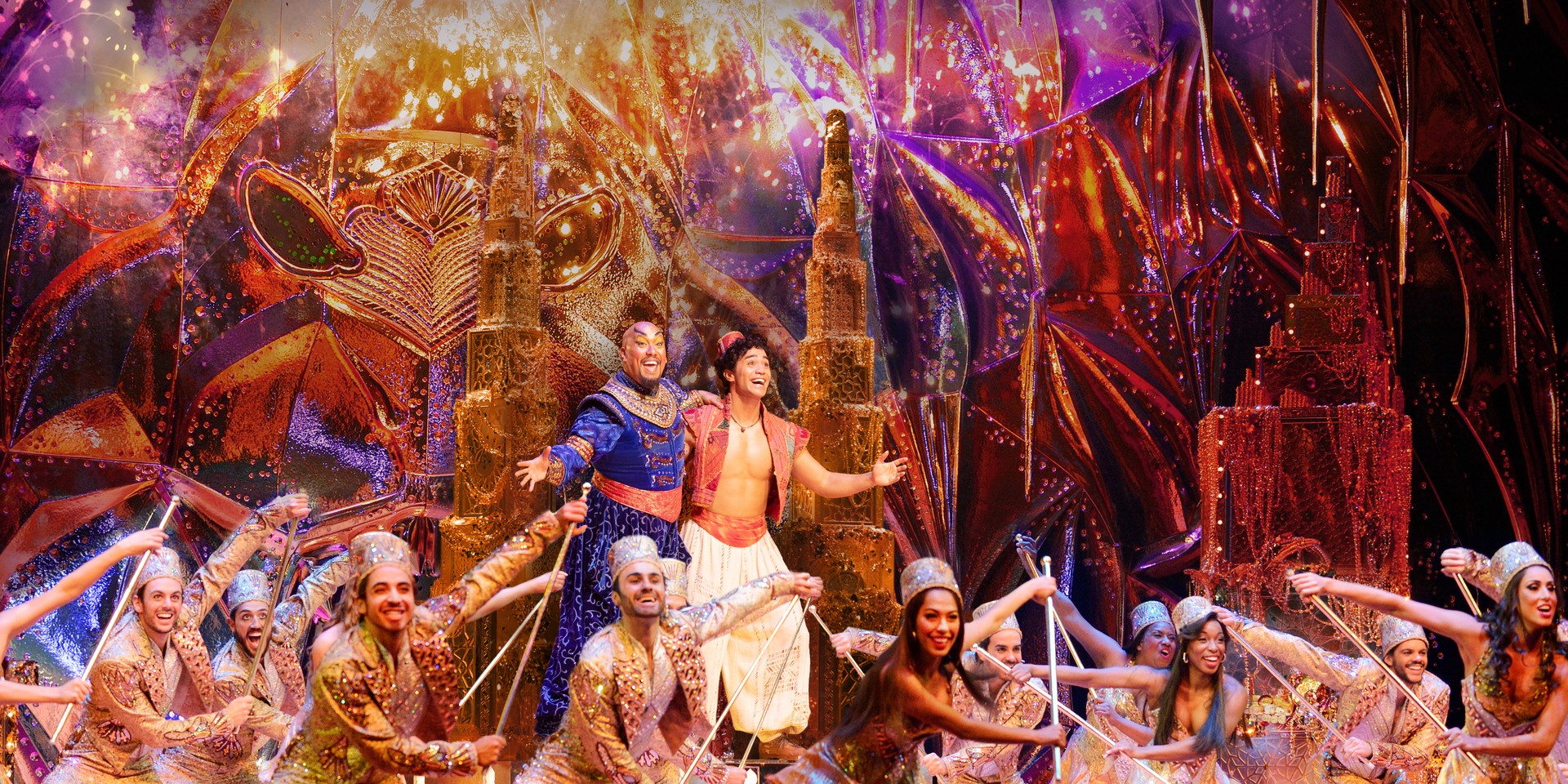 If you’re seeking out an incredibly fun time for the whole family over the next month or so, then look no further than the live musical adaptation of Disney’s Aladdin. The hit Broadway musical made its way onto our shores on 21 July, for a run that ends on 1 September.

Bandwagon was graciously invited to attend the premiere on 25 July – this was an opportunity we simply couldn’t refuse. We’re mighty glad we attended, as we were shown – as promised – a whole new world. 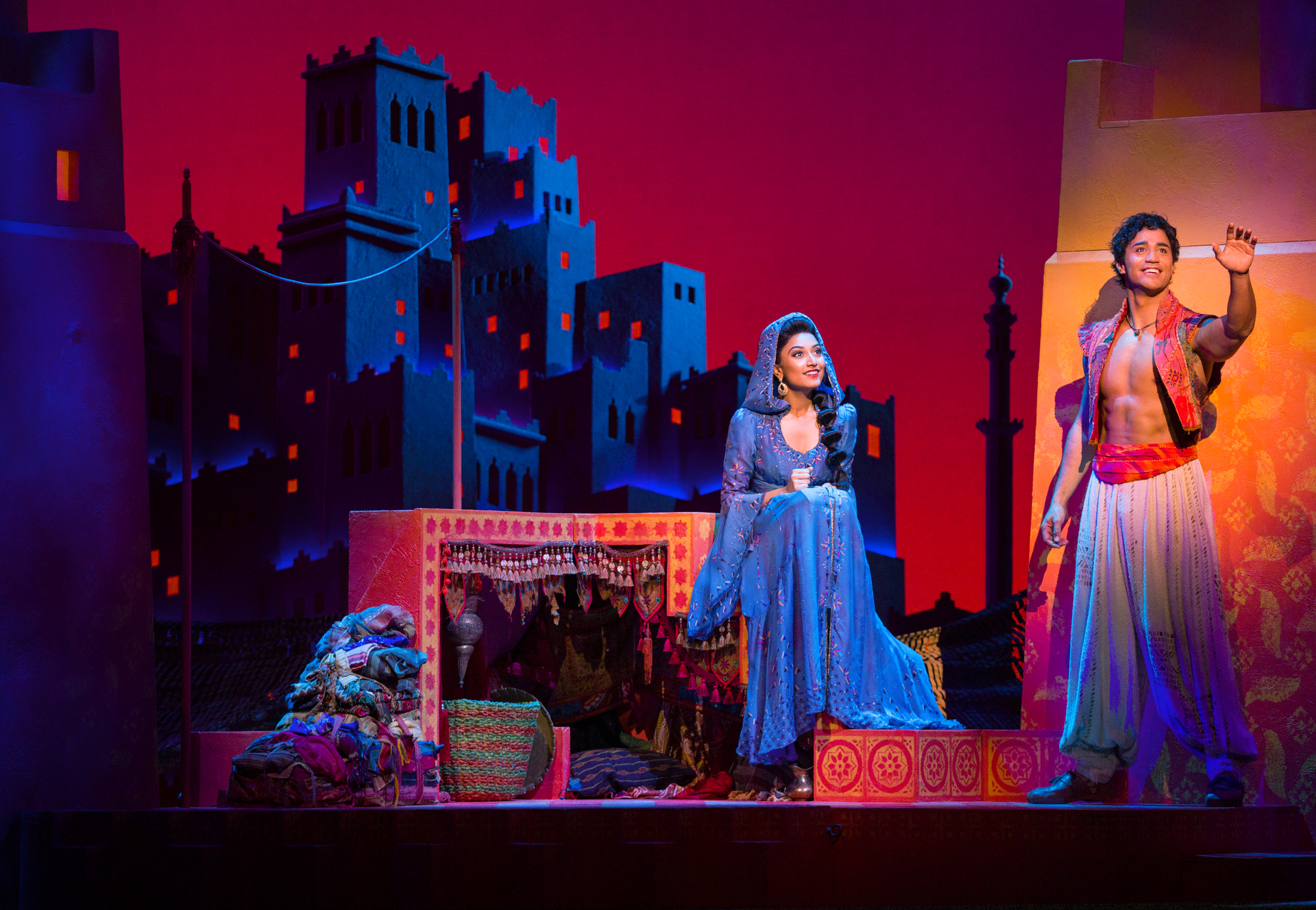 While the subject matter of the musical is essentially the same as the beloved animation, and its live-action remake, which was released earlier this year, a few changes were made.

Naturally, one can’t walk into a musical expecting mumbling monkeys and parrots with attitude. As such, Abu, the monkey was replaced by Aladdin’s friends Kassim, Omar and Babkak, while Iago, originally Jafar’s parrot, is now being portrayed as his trusty lackey.

While the Broadway cast wasn’t on hand to perform, Thomas Schumacher, President and Producer of Disney Theatrical Productions, made sure that the Australian touring cast was more than equipped to handle the production, and stick the landing.

It was especially refreshing to see that the primary characters were portrayed by actors of colour, in a mainstream musical like Aladdin, no less. While we’re thankful for the representation, it’s not just that brown actors were cast that makes this production as great as it is, it’s that the outstanding talents of minorities are finally being recognised and showcased. 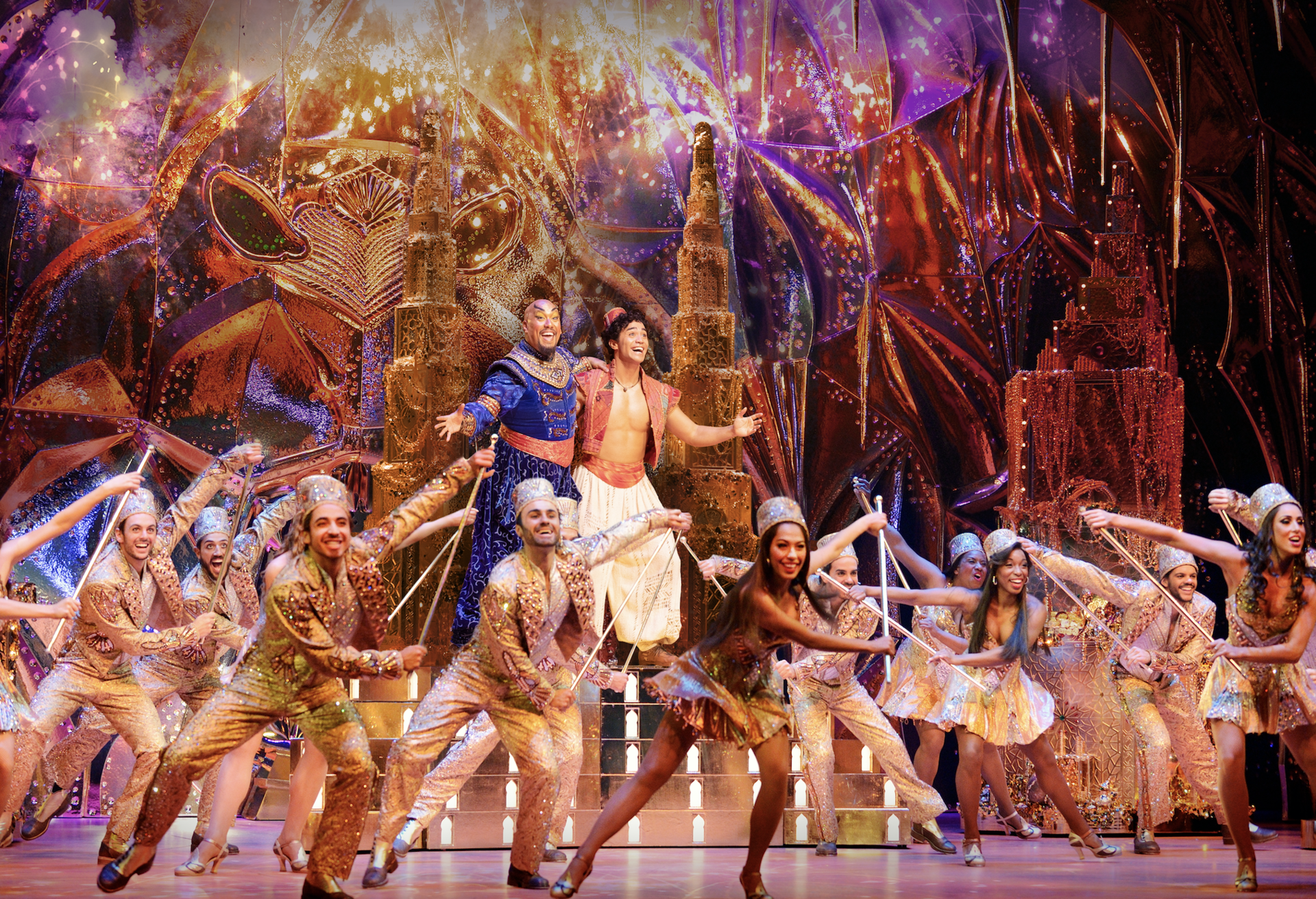 Graeme Isaako, Shubshri Kandiah, and Gareth Jacobs, who portrayed Aladdin, Jasmine, and the Genie respectively put on outstanding performances, from their intricate dance numbers, to displaying their refined acting talents. For the musical, the primary cast were given more time in the spotlight, with additional lines, and songs, being written for them, and more often than not, it helped add more depth to the well known characters.

A special mention has to made, for Gareth Jacobs’ stunning portrayal of the Genie. We get it, Robin William’s iteration of the iconic role, is and always will be untouchable – for the silver screen. Onstage, there’s a lot more to Jacobs’ Genie, than what we got in the film adaptations. 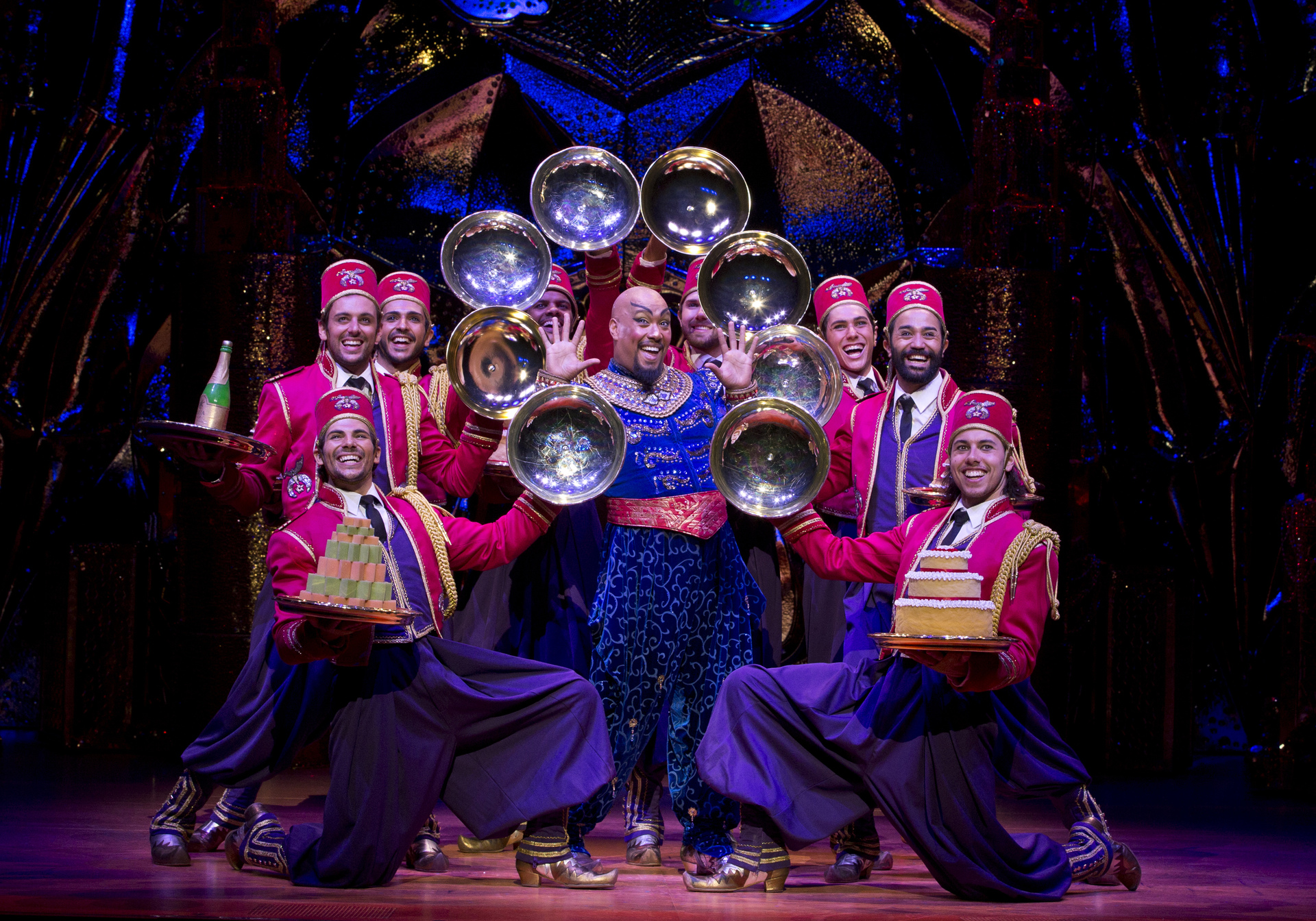 The show is about Aladdin, but make no mistake, Gareth Jacobs’ Genie is the star. He steals every scene he’s in. His entrance, especially, with fan-favourite ‘Friend Like Me’, dazzled beyond everyone’s wildest imaginations as the Cave of Wonders became one of the grandest set pieces in musical history. As its sparkling golden structures rolled in, the audience gasped in awe, and screamed in delight as the Genie appeared amid confetti and sparks of fireworks.

The set pieces, crafted by legendary set designer Bob Crowley were a sight to behold, breathing in new life to the land of Agrabah. The desert city was brought to life in spectacular fashion, with enchanting lighting and backdrop. The props were larger than life, and the pieces were majestic and breathtaking. And let’s not forget about the iconic magic carpet. A fully functioning automated magic carpet was featured in the play and undoubtedly was one of the highlights of everyone’s evening. 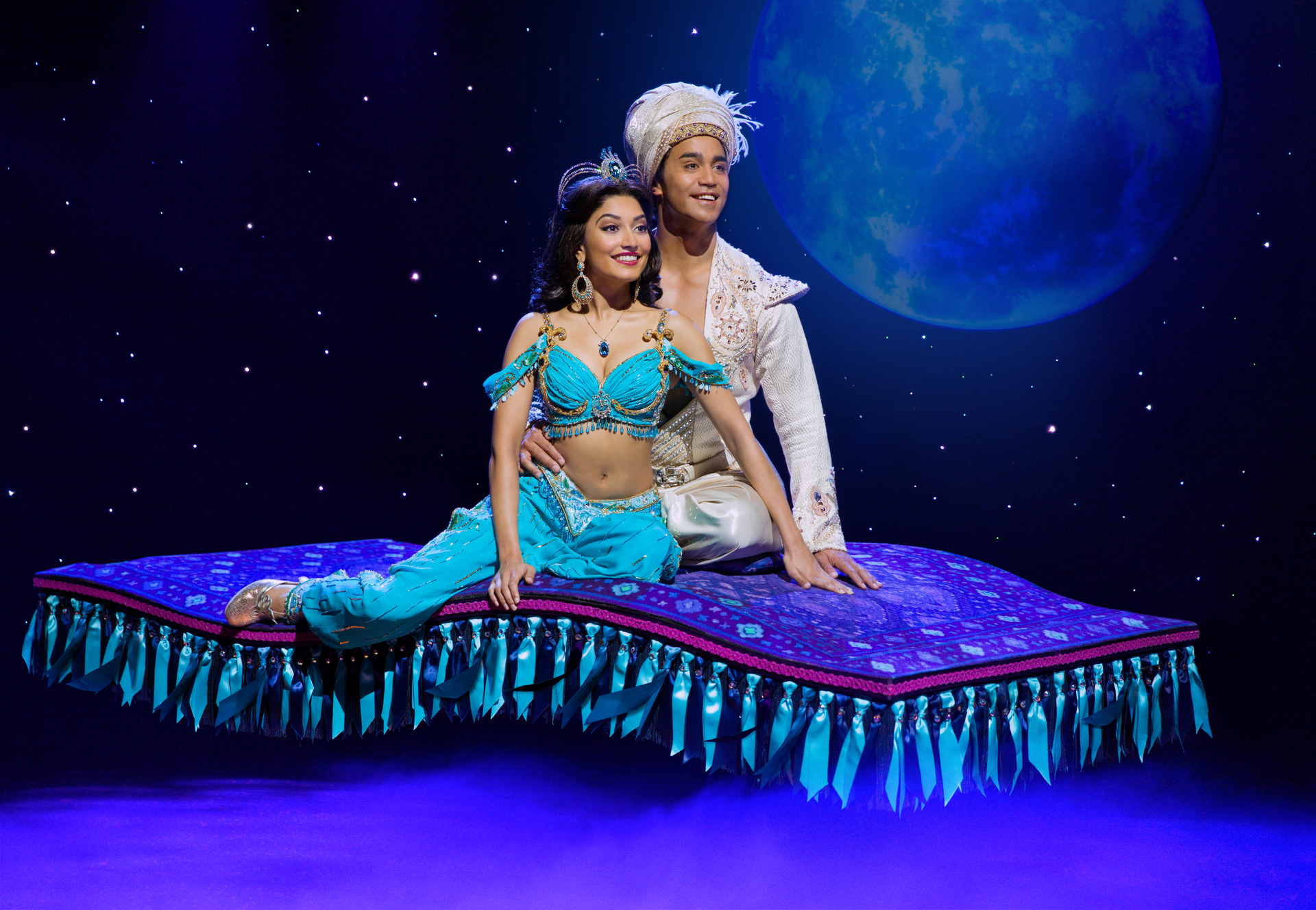 Last, but definitely not least, was the musical aspect of Aladdin. An integral part of the musical, you can’t talk about the production without acknowledging the works of musical maestro Alan Menken and his amazing team. While classics and fan favourites from the films were featured in the musical, it was onstage that they were able to fully execute its original vision. With music director Brent-Alan Huffman at the helm of the orchestra, the music further pushed the boundaries that accompanied the stunning visuals of the production. We’d be lying if we said we didn’t get chills at times from the orchestra’s performance.

All in all, Aladdin was a magical time. We’re going to end off with this: The cast and crew received two standing ovations. Shining, shimmering, splendid indeed. 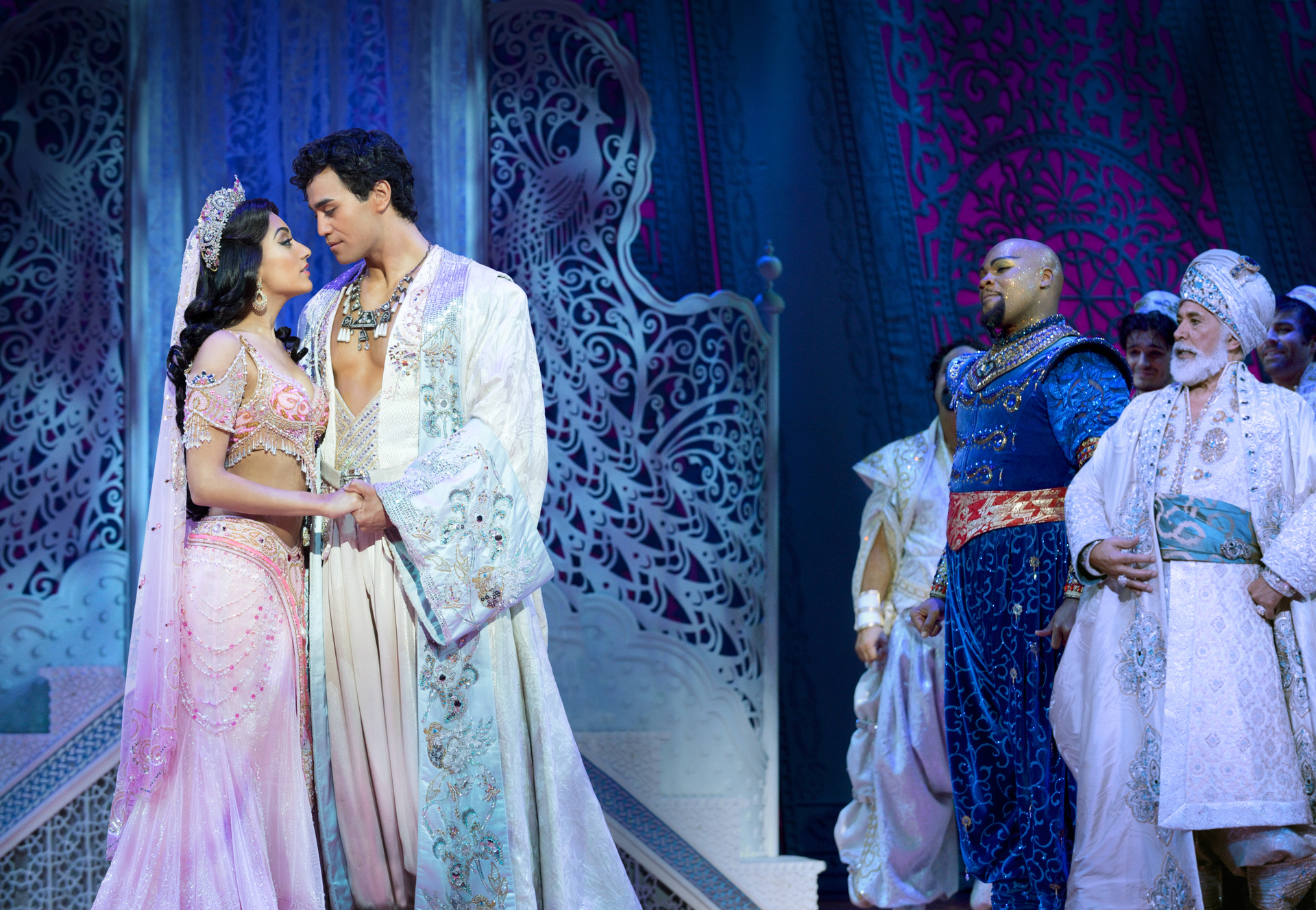 Disney's Aladdin is playing at the Sands Theatre, Marina Bay Sands until 1 September. Get your tickets here.

Special thanks to BASE Entertainment Asia for the invite.