"I’m about to embark on my European tour, and this is my first stop." With the first five minutes I’ve spent with Tiny Ruins, my expectations were met. Thanks to Greenhorn Productions; Tiny Ruins with just an album to name, belted out songs, talked of love and wowed the crowd with her incredible humor.

With the soft glow pouring on her, she launched into song 'The Death of a Russian', her sweet tantalizing voice echoing through the theatre while she sang from behind her guitar. Listening to her lyrics and how she sings them (I want to live where the traffic controllers are ballet dancers/and billboards painted with colors/where unkindness is fined in number of roses), it comes off as a huge shock to find that she is only 25 years old.

My favorite of the night had to be ‘Running through the Night’ where the lovely introduction captured the moment perfectly; her words feeling like they are entwined in a lover’s embrace with the night. As she ran her fingers down the spine of her guitar, I could feel chills running down mine at the same instant. 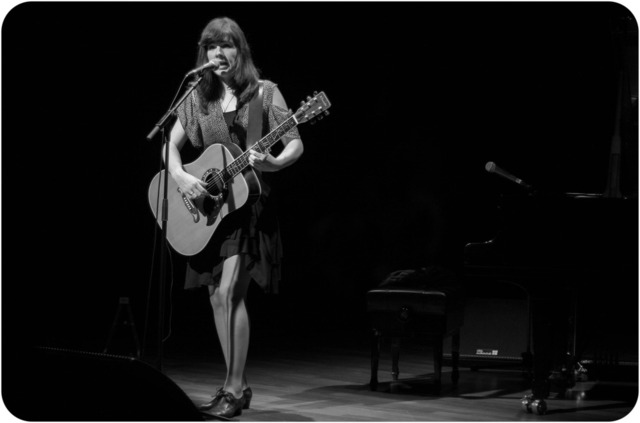 Tiny Ruins, the stage name for Kiwi born girl, Hollie Fullbrook, had more to show as she switched instruments for the ivories. It was another merry moment of the night as she admitted that this was her second time playing on a Steinway piano with the first being her moment as a recalcitrant rebel as she broke into a university back in Kiwi-land just to play on one.

Stripped down to the bare essentials of just her piano and her sultry vocals, it is easy to be lost in her voice as she does more than wets my appetite for her soothing lullabies. Albeit my night could have been made had she not missed out on ‘Cat in the Hallway’.

Hollie could have had a day job as a storyteller for all I know, as she explained the origins of her songs before each piece. 'Priests with Balloons', was written about a priest from Brazil, Father Carlisle, who launched himself off a cliff with a bunch of helium filled balloons to get to another side of the Peninsula and having never to been seen again.

The crowd was begging to be satisfied as she was dragged back to do an encore after her 75-minutes song set. She delved into ‘Birds in the Thyme’ her single off her record, ‘Some Were Meant for Sea’ which was responded with more cheerful smiles and catcalls. A cover of ‘Rolling Mill Blues’ done so perfectly it sounded like it came right off her album; was casually thrown into the mix before she exited the venue for a meet and greet session with her fans.

It’s a timely reminder of what underground music could give us; a small crowd but a night bursting full of emotions - none of that run of the mill stuff you imagined it to be.