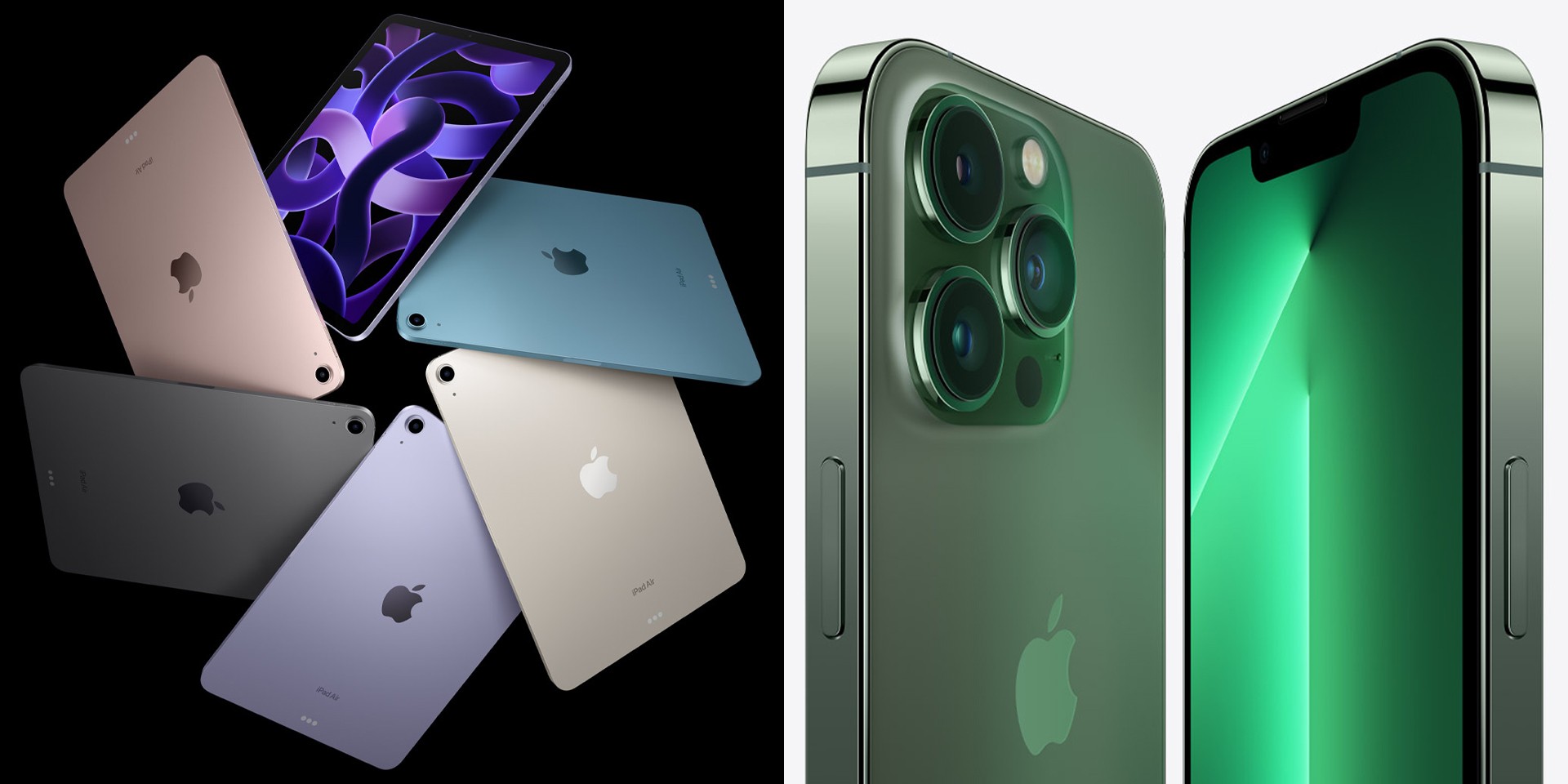 Apple is back with some new upgrades you'll absolutely love.

On Wednesday (09/03), the tech company revealed a fresh new colour for the iPhone 13 Pro and iPhone 13 and an upgraded version of the iPhone SE for an affordable price. They also introduced the all-new Mac Studio and Studio Display, as well as the new iPad Air to get the creative flow of artists, musicians, and content creators going at lightning speed.

Here's a recap of the products revealed at this month's Apple Event:

"People love the design of iPhone 13 Pro and iPhone 13, and we’re excited to unveil the stunning new alpine green and green finishes, which join the wide range of beautiful colours on the iPhone 13 lineup," Bob Borchers, Apple’s vice president of Worldwide Product Marketing, shares in a statement. "These new colours give customers even more options when choosing their iPhone, and we can’t wait for them to take advantage of all the iPhone 13 lineup offers, including unmatched performance with A15 Bionic, our best camera systems, massive improvements to battery life for everyday needs, fast 5G, incredible durability, and so much more."

If you've got a need for speed, the new iPhone SE should be your next target. It's the most affordable iPhone with unbelievable power packed in the palm of your hand—A15 Bionic, 5G, better battery life, improved durability, and a new camera system with advanced features like Smart HDR 4, Photographic Styles, and Deep Fusion.

The new iPhone SE comes in three colours—midnight, starlight, and (PRODUCT)RED—and will be available in 64GB, 128GB, and 256GB models.

"iPhone SE has been an incredibly popular choice with our existing users and for new iPhone customers, thanks to its iconic design, exceptional performance, and affordable price. This year we’ve built the most powerful and durable iPhone SE yet, with better battery life thanks to A15 Bionic, the same chip as our iPhone 13 lineup that also unlocks advanced camera features like Smart HDR 4, Photographic Styles, and Deep Fusion,” Kaiann Drance, Apple’s vice president of Worldwide iPhone Product Marketing, shares in a statement. “And with 5G, iPhone SE gives users faster downloads and uploads, higher quality video streaming, real-time interactivity in apps, and much more. Delivering the latest generation of technology and performance at this price is something only Apple can do."

Pre-orders for the new iPhone SE open on 11 March and will be available on 18 March. It is priced starting from 699 SGD.

With the new iPad Air, it's like you've got an ultra-portable mobile studio at your fingertips.

Built with the breakthrough M1 chip, the new iPad Air is a go-to workhorse for content creators, students, and gamers, delivering a giant performance boost to heavy apps and workflows. It's also up to 60% faster thanks to its 8-core CPU and can offer 2x faster graphics performance with its 8-core GPU, compared to previous iPad Air models. This simply means that users will be able to edit multiple streams of 4K videos, play graphics-intensive games for hours, and more.

Its new Ultra Wide 12MP front camera also comes with Centre Stage™, which will automatically pan to keep users in view even if they move around. Other people who join will be detected too, and will make connecting with your loved ones more engaging than ever. Users will also get to capture sharp photos and 4K video, scan documents, and enjoy AR experiences with tis 12MP Wide camera on the back.

Pre-orders for the new iPad Air open on 11 March and will be available on 18 March. Starting prices for the Wi-Fi model and Wi-Fi + Cellular models are at 879 SGD and 1,099 SGD respectively. The new iPad Air comes in space grey, starlight, pink, purple, and blue finishes.

Apple has unveiled the studio of your dreams all in one computer. On the all-new Mac Studio, users will get to experience power at an unprecedented level and push the limits of their creativity with the desktop computer's extensive array of connectivity and new capabilities. It is able to render massive 3D environments and playback 18 streams of ProRes video.

It's all powered by the game-changing M1 Max and M1 Ultra, delivering extraordinary CPU and GPU performance.

"We couldn’t be more excited to introduce an entirely new Mac desktop and display with Mac Studio and Studio Display," said Greg Joswiak, Apple’s senior vice president of Worldwide Marketing, says. "Mac Studio ushers in a new era for the desktop with unbelievable performance powered by M1 Max and M1 Ultra, an array of connectivity, and a compact design that puts everything users need within easy reach. And Studio Display—with its stunning 5K Retina screen, along with the best combination of camera and audio ever in a desktop display—is in a class of its own."

Watch the entire Apple Event below.