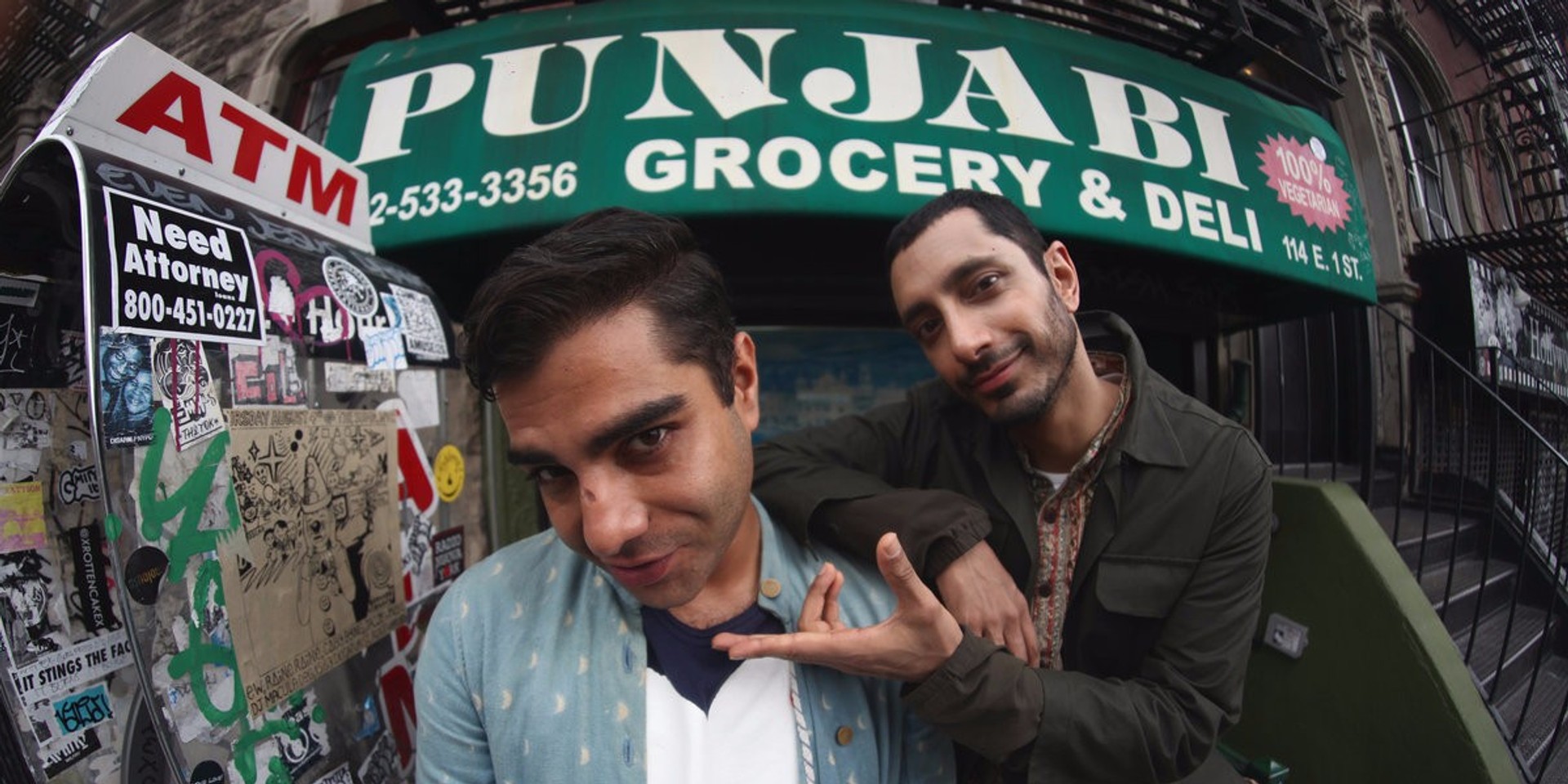 Donald Trump is president and that sucks. His rise to power is just the humongous, oddly-colored cherry on top of a recent string of fascist sentiments taking over the free world, and that sucks even more.

As a result, people are now up-in-arms to defend democracy, keeping a watchful eye on their government's every move, springing into collective action as needed. Among them, musical artists from every genre and various backgrounds are marching with their instruments in tow, ready to provide an anthem for the movement at every turn.

Many of these musicians, though, have been singing about the injustices they face long before Trump had even started running for office. Often, they've been rendered invisible by a system which favours white voices above anyone else's, and the fact that much of their music remains just as relevant today is a gross testament to how little has truly changed and how badly things needs to be fixed immediately.

Below is a selection of songs Asian and Muslim musicians have released throughout the years — with some as recent as a few days ago — of dealing with systems of oppression.

Listen, reflect, spread the word, and fight the power.

When you can't deal with the absurdity of xenophobic policies such as the US immigration ban.

The Kominas, "See Something, Say Something"

The Kominas, a group of South Asian-American kids from Boston, were pioneers of taqwacore, literally "pious hardcore", a subgenre of punk music which deals with Islam, its culture, and interpretation in Western society. The band has produced numerous albums about what it's like to be a brown person in America, often taking an absurdist view at the world, and always heavily political.*

In 'See Something, Say Something', a track off their 2015 album Stereotype,The Kominas poke fun at white people's paranoia over seeing brown folk in their presence, a play at the US Homeland Security's campaign which has caused so many people reporting "suspicious activity" to law enforcement based solely on racist stereotypes, and in the case of the song's music video, ruining a perfectly good tiffin of biryani on an otherwise nice, sunny day.

Both prolific rappers in their own rights, the two faces of the Swet Shop Boys, Heems and Riz MC have been described by Pitchfork as the "perfect foils for one another".

Heems is a first generation American of Punjabi-Indian descent from Queens; Riz is a child of Pakistani immigrants living in London.

Heems raps with a cadence so casual (a style he's honed since his days with alt hip-hop group Das Racist), you feel how closely his own lyrics hit home for him with every punch he blows, a kind of "laughing-to-keep-from-crying" exasperation, to borrow his own words to his partner once.  Riz (you might recognize him as the renegade pilot Bodhi Rook from Rogue One) is more urgent and cutthroat, words filled with evidence of his scholarly background, which, given his circumstances, remain no less personal (you might have read his essay, 'Typecast as a Terrorist', and I mean if you haven't, you should).

Their debut LP, Cashmere, is a fitting manifestation of their dynamic as artists and their shared experience as Muslims and people of color. Its lead single, 'T5', is about racial profiling at airports and the harassment South Asian and Middle Eastern people often face from border control. At LAX, it became an anthem of sorts against Donald Trump's Muslim Ban, with demonstrators chanting the song's opening line, "Inshallah, mashallah / Hopefully no martial law", to the crowd.

Among the musicians on this list, British rapper and singer-songwriter M.I.A. is probably the one that needs the least introduction, matched in popularity outside of it only by former One Direction member Zayn Malik. Born Mathangi Arulpragasam to Sri Lankan parents of Tamil heritage, M.I.A. has been exposed to marginalized struggle at an early age, when she had to flee the violence in Sri Lanka with her mother and siblings in the eighties.

The current refugee crisis, then, is a cause very close to her heart. Released in 2015, 'Borders' tackles the issue in a rather literal way, the urgency in its message not only a form of solidarity with refugees, but a call to listeners to challenge their hateful fear and misconceptions and regain the humanity deep within.

When people say you're overacting about discrimination.

A prominent name in the Asian-American hip-hop scene, what makes Bambu truly impressive as an artist is his thorough understanding of intersectionality in social justice. He used to be in a gang, served in the military, is now a dedicated father, and proudly raps about being Filipino throughout all these struggles, but he's just as straightforward about sexism (an awareness that wouldn't be surprising if you also knew Rocky Rivera, his wife), and is constantly mindful about respecting hip-hop's roots and continued significance in the black rights movement.

Bambu and Rocky are part of the independent record label Beatrock Music, a collective of Filipino-American artists who defy the colonial mentality and internalized racism that has plagued the community for generations. Bambu's latest album, Prey for the Devil, tackles the "school-to-prison [or] school-to-military pipeline system" in which the devil that is racism has trapped many poor young people of color. In 'Whiteface', he talks about how the white ruling class invites the marginalized in only when its beneficial to their narrative, but excludes them otherwise by bombarding society with Caucasian imagery as the favorable default. At the end of the track, Bambu chants, "this ain't for y'all, this for us," a call to people to prey on the white devil and end institutionalized white supremacy once and for all.

As musicians boycotted President Trump's inauguration last January 20, Houston-based riot grrrls Giant Kitty joined the numerous groups of artists who hosted their own concerts in their respective hometowns in protest instead. Their front woman, Miriam Hakim, is Syrian-American and organized We Belong, a "big angry concert" which gathered bands with Muslim members, to remind the current administration that they are still their constituents and they will not back down to the bigotry Trump has emboldened.

'This Stupid Stuff', the titular song to Giant Kitty's first full-length album, is a hate letter to micro-aggressions faced by minorities everyday. The video imagines the prejudiced comments people casually throw at others as post-it notes that get stuck on their bodies, and shows how damaging seemingly minor remarks actually are to a person's psyche. It's the band's response to the notion that we can build a tolerance to the world's negativity if we take it a little at a time. "When I thought about this in regards to prejudice and discrimination, I thought it was bullshit," Hakim says in an interview with Colorlines. "I don't think microaggressions desensitize their recipients to discrimination and hatred. They just desensitize everyone else to noticing and listening when someone around them says 'someone hurt me.'"

When you need some peace of mind.

Iranian-Dutch R&B singer-songwriter Sevdaliza is among the musicians directly affected by the US government's mandate against seven Muslim majority countries. Following the slew of reports of people being barred from entering US soil, including fellow Iranian, London-based multi-instrumentalist Ash Koosha, she released 'Bebin', a powerful track sung entirely in Farsi, in solidarity with "victims of racial exclusion".

Meaning 'behold' in English, Bebin, as Sevdaliza claims, is simply a message that she felt compelled to deliver; but to those who know her story, it also works as another embodiment of her life as a girl who, having left home at 16 on a basketball scholarship, has had to learn how to be a survivor early on. The track opens with a reflection on how actions stemming from selfishness and pride affect other people (This feeling makes you feel grande / Yet this same feeling makes me feel small), and ends with a promise that whatever the oppressor tries to force onto his victim, her love for the world will remain larger than life.

22-year-old Shamir Bailey, unlike the other artists on this list, is neither Asian nor immigrant. He was raised Muslim, but considers himself more spiritual than anything else. Being a genderqueer musician from starkly suburban North Las Vegas, though, Shamir presents a different experience of feeling "othered" in your own home.

The singer-songwriter released 'Breathe' in response to the 2016 US election results. In it, Shamir sings about how "it's hard to believe that we couldn't see the doom that we have ahead of us". According to Bullet Media, he matches the song with a Facebook post challenging straight white men and women to fight for their marginalized countrymen.

"We fought endlessly, but we are still the minority," he says, referring to LGBT and POC Americans. "To my straight white males and women who are disappointed in this outcome, this is your fight. Welcome to the fight that I have had to fight my whole life. Now don’t get me wrong, I’m not going down gracefully, but this is not our mess to clean up, but I will gladly hand you the broom.”

*ERRATUM: A previous version of this article referred to the members of The Kominas as Pakistani-Americans and their music as relating only to brown Muslims. The band has clarified that not all of them have Pakistani heritage nor are Muslim, and they have already dropped the label "taqwacore", having found it limiting to their intended message.

You can still help Bandcamp raise funds for the American Civil Liberties Union, or ACLU, by buying any track or album from the site until 11:59 PM (Pacific Time) — that's 2:59 PM  for Jakarta and 3:59 PM for Singapore/Manila. The bolded links above lead to the respective Bandcamp pages of some of the songs and albums listed in this article. And in case you missed it, here are albums from Singapore, Indonesia and the Philippines you can buy to protest the US immigration ban.

You can also donate to the National League of Lawyers, an organisation of human rights lawyers whose programmes include legal support for immigrants. Riz MC is also co-running a fundraiser to help provide for the basic needs of Syrian refugee families.