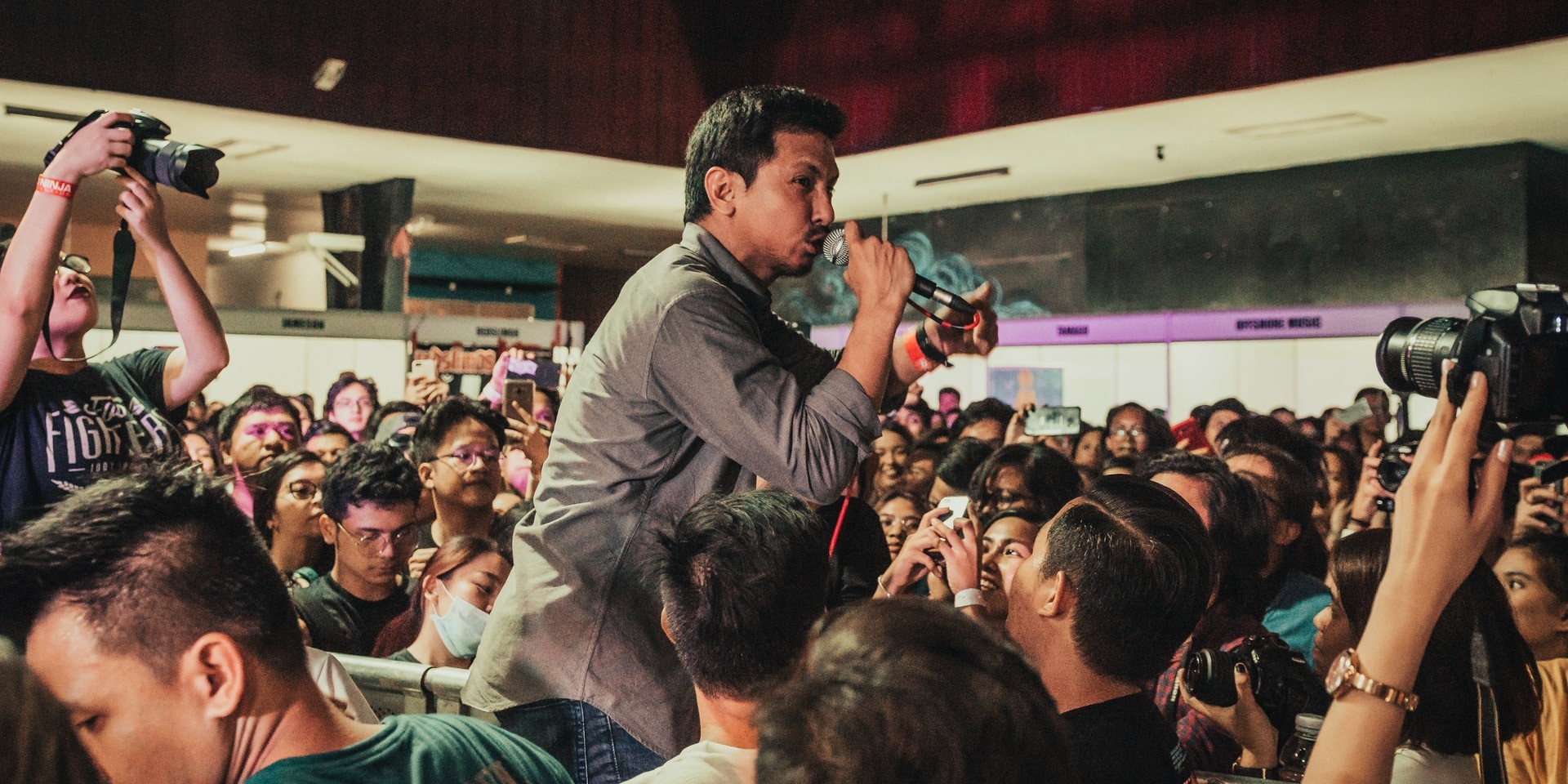 Saying good-bye to your home is often a bittersweet feeling.

Over the past decade, B-Side, The Collective has been home to a spectral of genres that made the local music community so vibrant and alive. Thousands of memorable shows were held at the Makati venue, from small prods shows, reggae/dancehall/ska nights on Irie Sundays, life-changing Fliptop battles, to music festivals that would rage on until morning.

"B-Side definitely evolved from what we first wanted it to be," B-Side owner Anna Sobrepeña-Ong tells Bandwagon of the iconic venue's early beginnings. "Initially we wanted it to be more of a spot for DJs, but it naturally evolved to a live music [venue] which is great! Through Sanya (who was handling band bookings for some time) and John Joe, we were able to reach out to bands to come out to play. I wouldn't change a thing. I love B-Side's natural evolution." 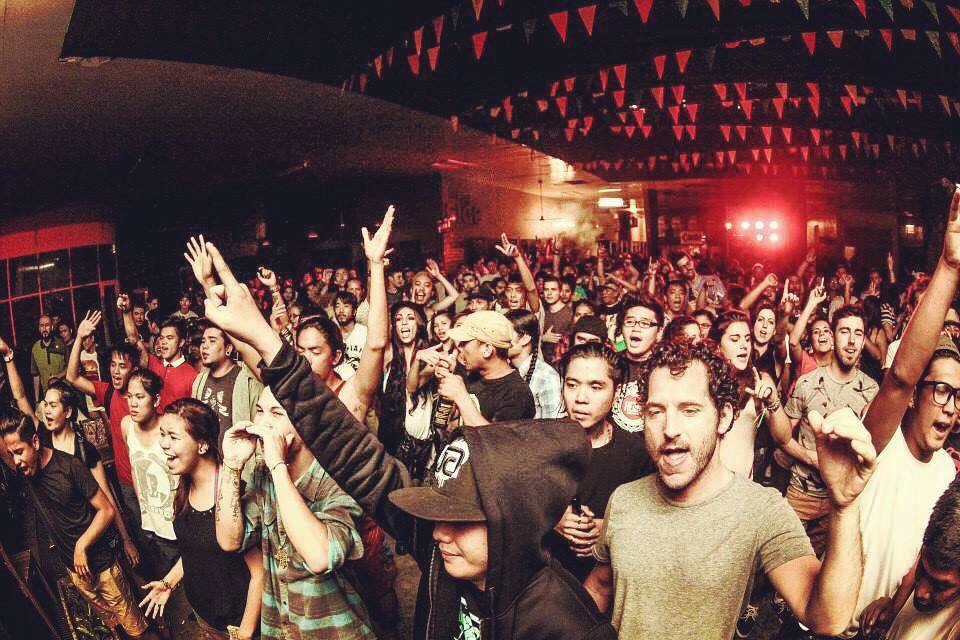 While numerous homegrown names took over the space, the likes of lifestyle shirt line Nick Automatic left their mark every year, drawing in crowds that would flood out to Malugay street when they max out B-Side's capacity. Nick Automatic founder Nicolo Nimor, who held Threadfest at B-Side annually shares how there's no other place that comes into mind for the independent music and local clothing brands festival. "Since 2013, we’ve made the place home for our annual November event. B-Side will always be a safe place for people to come together and celebrate some of the best in local music and merch. More than the gigs, the place has hosted a plethora of memories that we shall fondly look back on. And as it is coming to a close, we have nothing but gratitude and love to the staff and management of the venue. Thank you, B-Side." 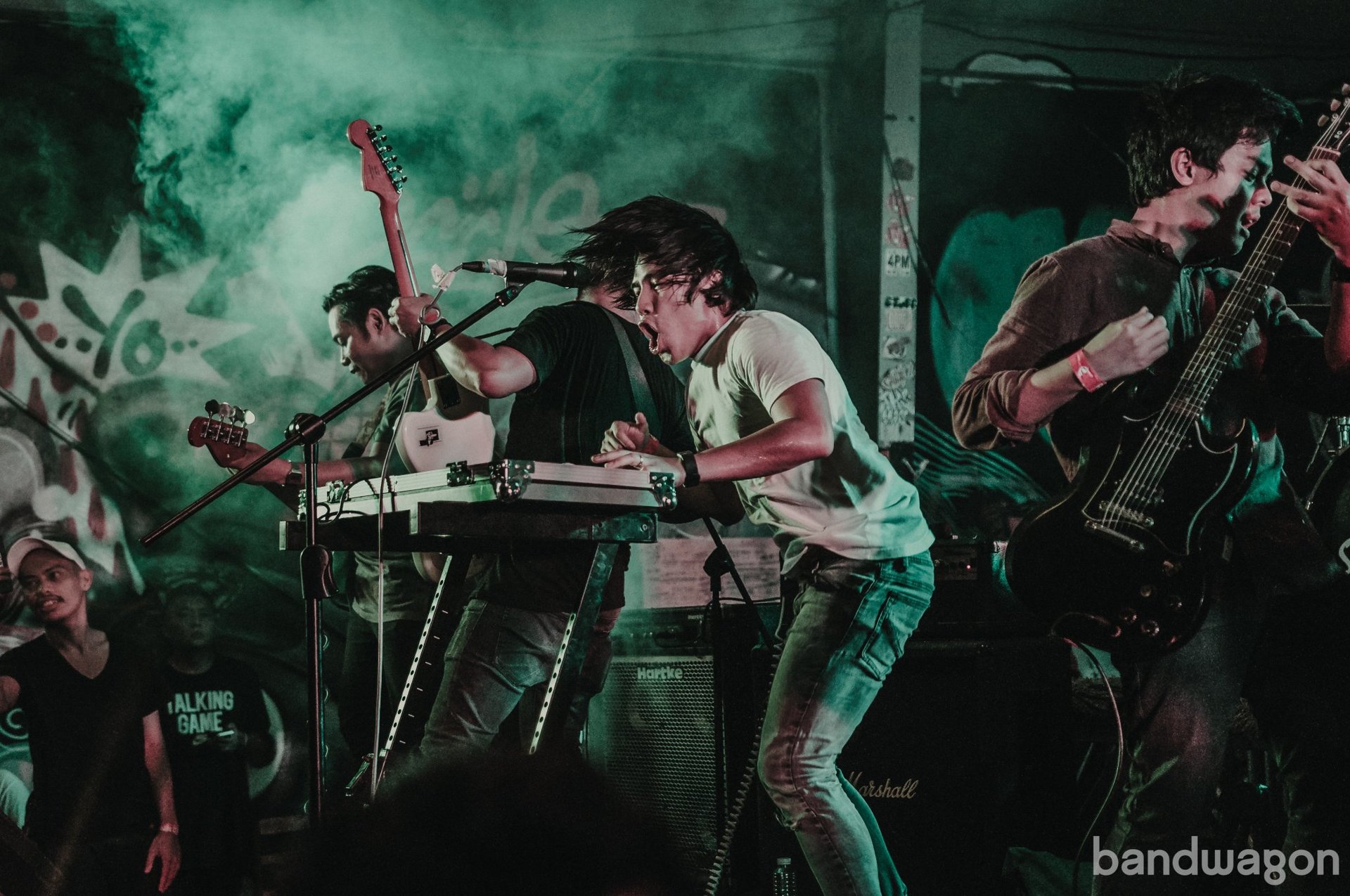 "B-Side was such a massive platform and hub for diversity, variety, and culture."

similarobjects calls B-Side a sanctuary from when it first opened. The 'Quiet Mode' producer reveals how much it opened him up to more than what mainstream music offered. "It was such a massive platform and hub for diversity, variety, and culture," he says. "It became the breeding ground for so many creative projects for me and I'm sure for a lot of people too. If anything I think B-Side has even witnessed all the different iterations and versions of my musical self. It's definitely brought so much more into my life and I owe a lot to the place. Too many dope memories to mention but its safe to say that a huge chunk of my favorite moments happened there." 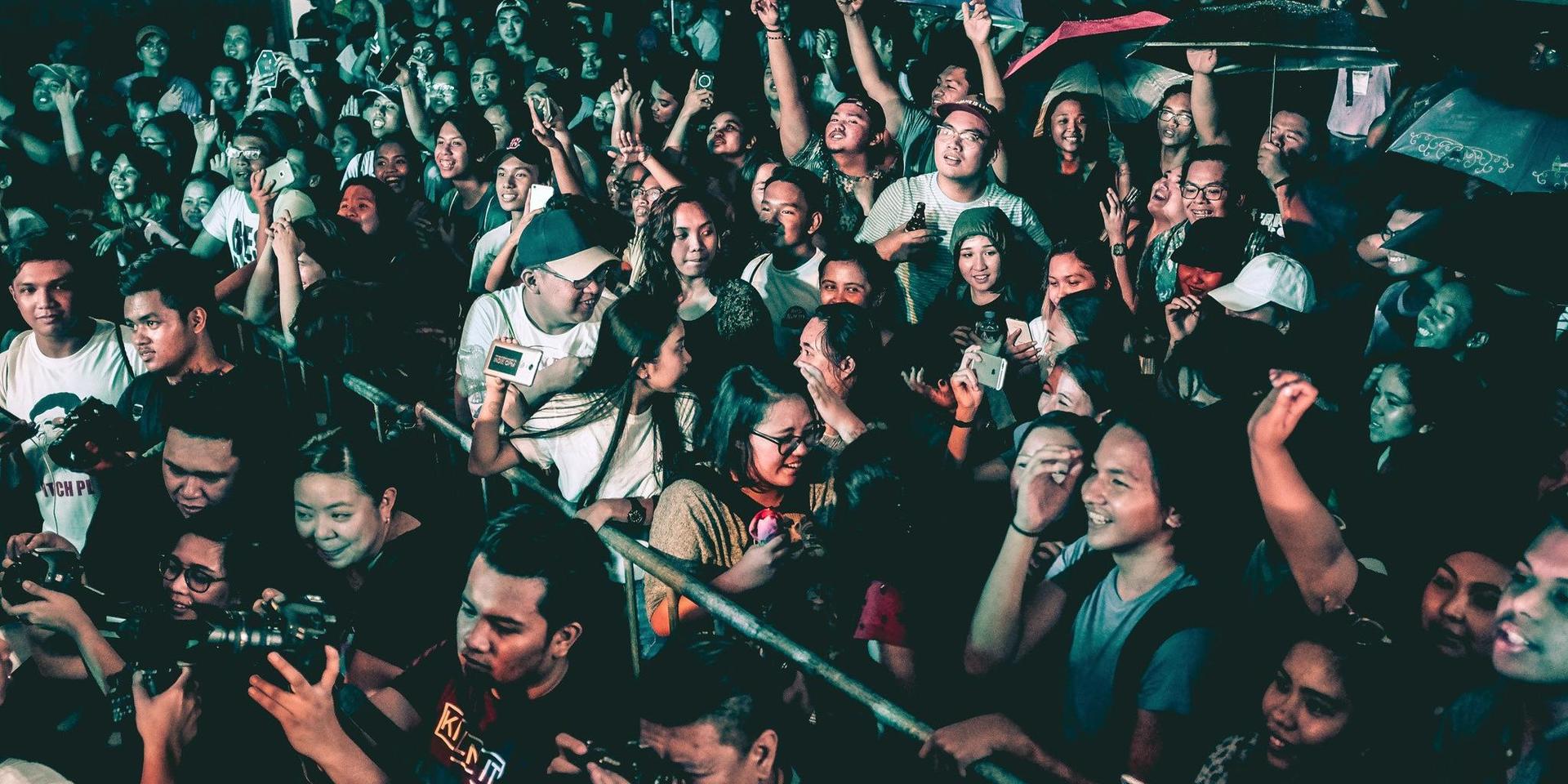 Greyhoundz vocalist Reg Rubio describes B-Side as a "melting pot of movements and cultures." In a tweet, he writes his thanks, "We have all been blessed to have had a home for our endeavors these past years. In behalf of Greyhoundz, Medisina Clothing, Brgy Tibay, and Balian ng Leeg, thank you B-Side for all the love and support! Onto the next mission/vision."

Whatta wikid night to end Irie Sunday @ B-side last night... Large up to all Irie Massive Family & Crew! Big Thanks for all the support you’ve given us from day one.. Maximum Respect to all the selectors & bands that kept the fire burning for the last 9 years. We made history 🔊🔊🔊🔊🔊 See you in the next chapter 🔥🔥🔥🔥🔥 #bsideforever

"I will never forget B-Side because this is where I saw electronic acts Daedelus and discovered Kode 9," Diego Mapa reveals. "Tarsius also opened for foreign acts, Max Tundra and Mouse On The Keys. Pedicab also played a number of good gigs here including the one that appears in the film, Ang Nawawala dressed as Kraftwerk. Can't also forget leaving my car out on the street in the middle of a storm. We all know it gets flooded over there right? I came back to it at 5 a.m. because the flood water never went down. I walked to it with the water up to my knees. When I opened my car, the water already entered it almost up to the hand break.  Good thing my roadie friends of Soupstar and Jay of Tarsius helped me push it away from the flooded street up to a dry area; so that I could start my car. Fortunately, it started just in one click. After this, I knew the true meaning of 'auto-detailing' (laughs). Anyway, a mix of good times and bad but B-Side definitely is already in my books." 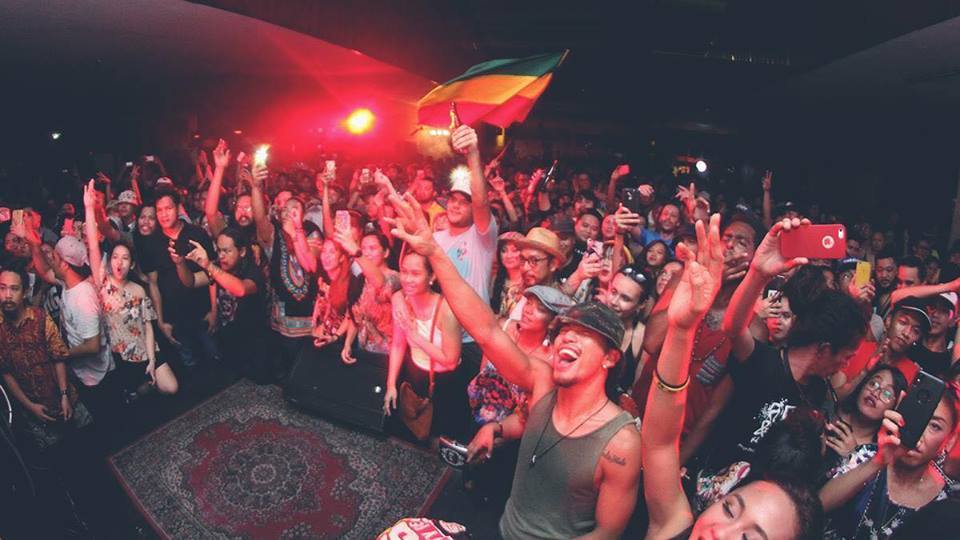 Along with movies like the Marie Jamora-directed drama Ang Nawawala that was shot at B-Side, there are real love life stories that have B-Side as a backdrop that changed lives forever. Tom's Story drummer Degs de Guia shares on Twitter that it was at a BRGY. TIBAY gig in B-Side where he first held hands with his girlfriend, Rica.

Autotelic's Kai Honasan writes in a tweet about how she launched albums and fell in love with Chicosci bassist Eco del Rio (who proposed to her onstage) at the graffitied music space. "I dreamed that we could take our babies here in tiny headphones to watch Telic and Chico gigs but we’re happy we got to memorialize how much this place meant to us."

Next to love stories, bands and music artists were also born at B-Side. The Carlos Castaño-fronted act The Metro Fantastic played their first show there as a new band at the recent Red Ninja Production anniversary. "Carlos put down his guitar and we played 'Put that Down,'" they write in a reply to Bandwagon's B-Side story Twitter thread. Nights of Rizal also shares his first gig story at B-Side on the thread. "My first gig as Nights of Rizal? Sa B-Side, 2010. Thanks for being home to me and so many others making laptop music with no idea how to share what we were making. Thanks for the teapots of rum coke; to everyone who played and listened, cheers, let's let out one last collective sigh." 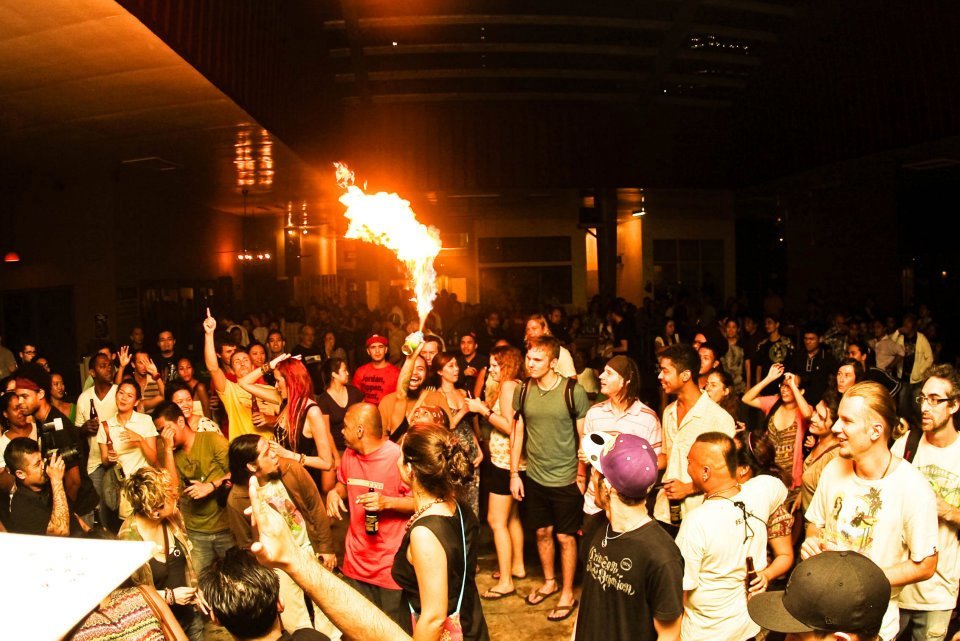 "Our regulars are so diverse," Ong says. With people coming from different backgrounds and lifestyles across the scene flocking together, diversity is simply one of the things that made B-Side such an exciting place to visit. "Which is why B-Side to us is so special because it brought different kinds of people together in one spot."

Despite losing the beloved and iconic venue to gentrification, Ong remains hopeful on whatever their team will do next. "We haven't really thought about it yet," Ong says. "We're just going to step back a bit and see what we can do next." 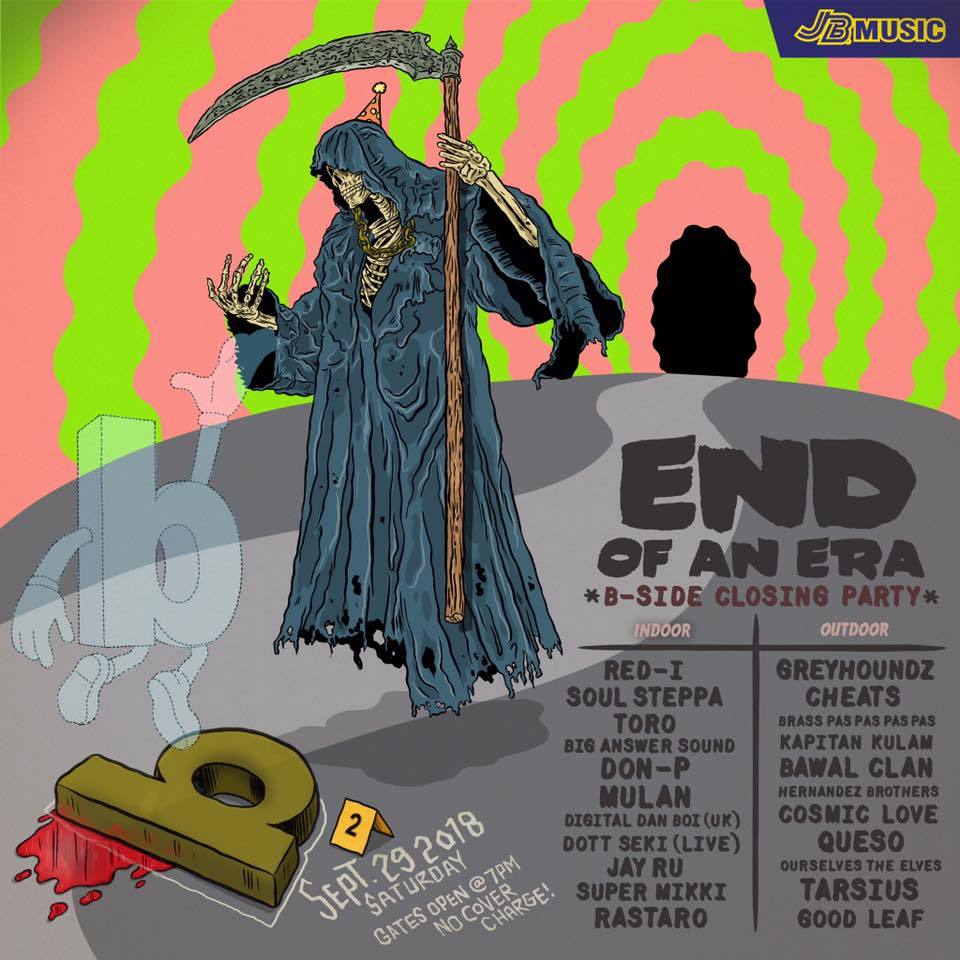