About ten minutes before he’s due to come on, Will Wiesenfeld sits knees hunched in at a corner in the member’s only area of dimly lit Home Club. With only the backlit of a phone to his face, he tweets a few cat videos before favoriting a few fan tweets about @BATHSmusic (mine included).

With the crowd getting all cozied up by .gif and their cute gawky moves, Baths, made up of Will Wiesenfeld and Morgan Greenwood, walks in to a sea of smiles. His short shorts occupy the bulk of the murmurs in the crowd, comfort he calls it, with "I would f*ck a nerd like him" the next topic of contention.

Starting the slew of tracks was 'Miasma Sky', which to our current atmospheric conditions makes the song a very apt opener. The single off Obsidian is the catchiest of the lot albeit with the least effects on his vocals, the gentle touches of the keyboard grants Will more freedom with his lavish vocals.

It may be easy to break up his song layer by layer. Bass line, drum beats, strong fuzz and vocals swamped with effects strategically placed at the end of each liner; but the mix seamlessly cross each other like cogs of a tightly wound gear seams of a tightly wound corset. 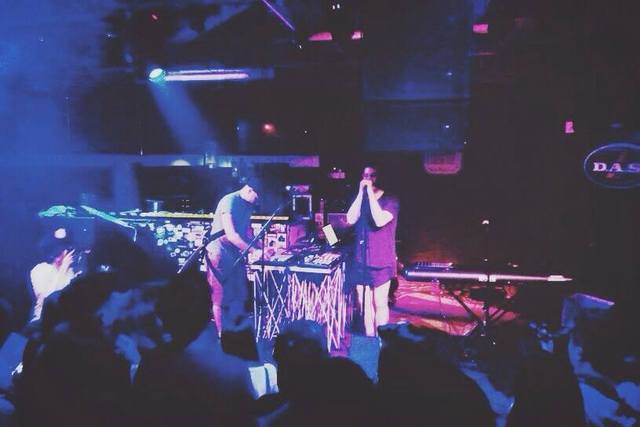 Compared to Cerulean, there is much more of his childlike vocals on it but maintaining the same gear-shifting beat he carries along with it. The new album does that brilliantly, showcasing the appropriate skill needed to invent such a pulse-stopping track, infusing his wobbly child-like vocals with sounds that would complement a Windows 98 screensaver.

There was a lot of banter between the crowd and the men on stage, at one point a fan calling incessantly for ‘Hall’ to be played, to which Will replied, "We are not a karaoke DJ." Midway through the second song, Will motions “We got to kill the fog machine? It sucks.” to which the crowd cheer in exchange for a clearer view.

Despite his jam-packed schedule, the Australasian tour for Baths takes Will and Morgan to various destinations like Taiwan, Manila and a series of five shows in the five big cities down under, but there were no dreary look or heavy eye bags to bear on Will’s face.

In ‘No Eyes’, the energy was scintillating; Will wrestles the microphone, screaming into it with as much vigor and weightiness just as how metal core bands on Soundwave would. The lyrics is blunt and filled with passive aggression, And it is not a matter of if you mean it / but it is only a matter of come and fuck me. It wasn’t to compensate for anything else, but with the intensity tripled over the course of the set, the track stood out amongst the rest of the set.

As it is with most bands, it is always out with the old and in with the new. There was that encounter with E. Coli that effectively pulled the band off the map for a good year or two but Will prevailed the stronger one, writing an album of crowd-pleasers in Obsidian. Who knows when the next new track will be out or when Baths will ever return for another stellar show again? But when there’s a Will, there’s a way right?