Ahh, Baybeats. Every year, we'll never fail scouring the grounds to consume as much live music as possible. They always deliver every year with a concise but intriguingly varied lineup that's enough to keep us until the train ends its service. If there was one grand observation we've made from Baybeats this year, it's that Singaporean independent music is truly moving into a new realm of possibilities for local musicians.

Everyone seemed truly inspired and thriving in new places for creativity. Caracal pulled probably the biggest crowd we've seen at the Powerhouse (check out our report of their album launch last December too). Bands old and new performed with incredible exuberance despite the distracting interruptions of National Day rehearsals and the smothering humidity. Kudos to all!

Out of all the bands featured throughout the weekend, here are the acts that showed remarkable growth, impressed us from the start and made us feel all sorts of feelings. 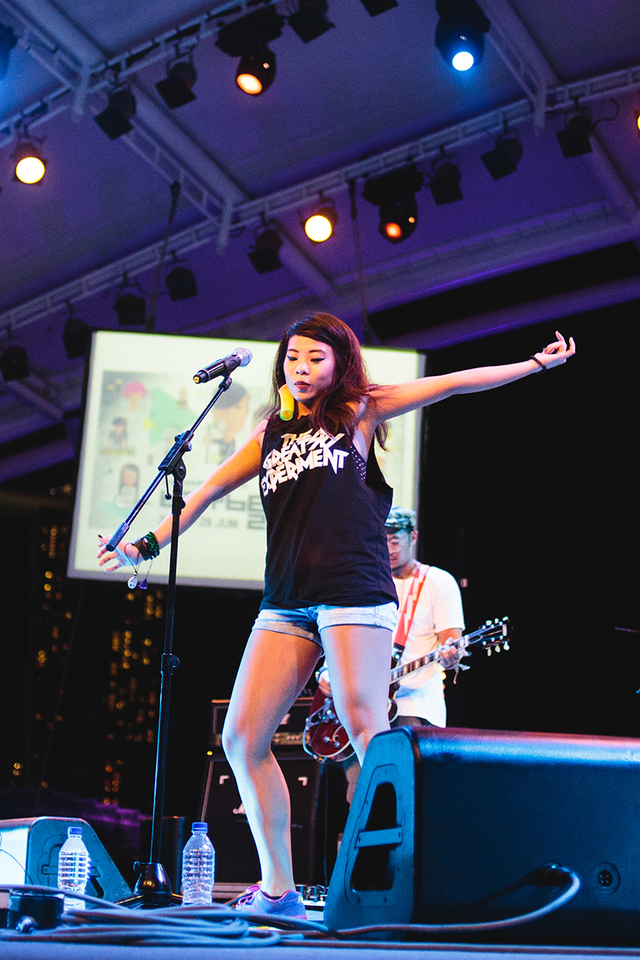 Who: The exclamation in their band name is necessitated, as a result of their eclectic range of touchy sensual music and quirky dance moves from lively front woman Eugenia Yip, who doubles as vocalist for jazz group The Steve McQueens.

Four Years On: Playing on the very same stage in Baybeats 2011, Eugenia and synthesist Ken return to play Baybeats 2015 with a full line-up and a much bigger sound.

Class Substitution: With drummer Ritz Ang in London supporting Gentle Bones for his SGMUSO Live Showcase, Fandy from now-defunct Great Spy Experiment stepped in to work his sticks for the band. 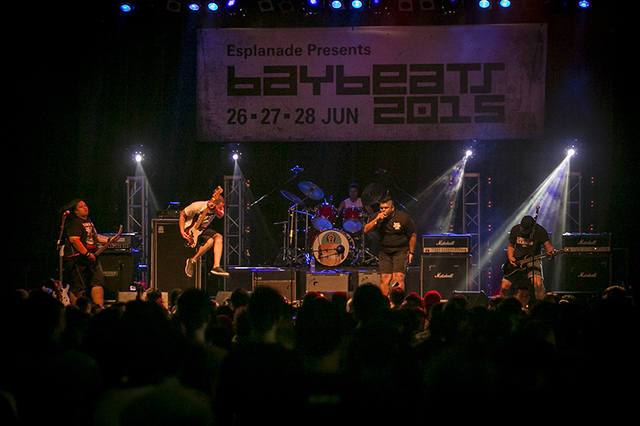 Vengeful Punishment: Aggression is in their blood. Out For Blood were harsh and punishing from the first minute out. We spotted a family of three slowly tiptoeing their way out after a slew of f-bombs from the blaring speakers.

F*** tha Police?: Not quite the similar story but we did see the auxiliary police on duty getting turned away by the crowd after attempting to impose on their mosh pit.

Beat the Heat: While everyone else was in their sleek pants and buttoned up shirts, sneakers and shorts were the uniform outfit for Out for Blood.

Massive Air Time: Yasser who calls himself the ‘Punisher’, stout and astute in making most out of the capacious stage, leaped in the air and landed with a hard plummet. Gotta work them squats! 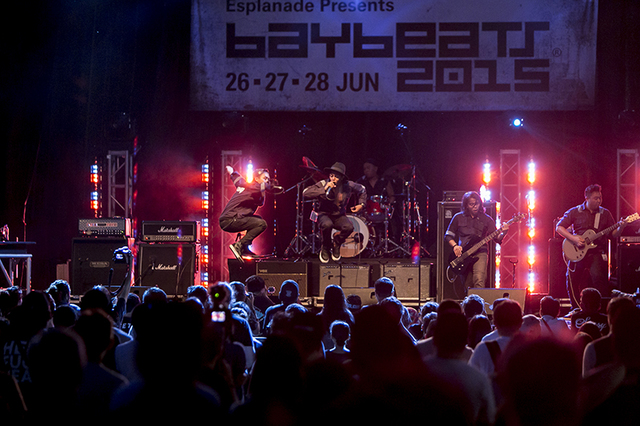 Refreshing Sound Of An Older Style: Baybeats is known for its diversity in genres, so fans of the rap rock genre, you can breathe easy now knowing there’s SG representation for this recently resurrected combination.

Under Cover: Everyone likes a good song with bits of anti-establishment and plenty of heavy riffs to go round. So when Young let loose a cover of Rage Against the Machine's ‘Killing in the Name’, the resounding reply was an agreeing ‘UGH’.

Overheard: ‘Only young people can pull this off sia…’ 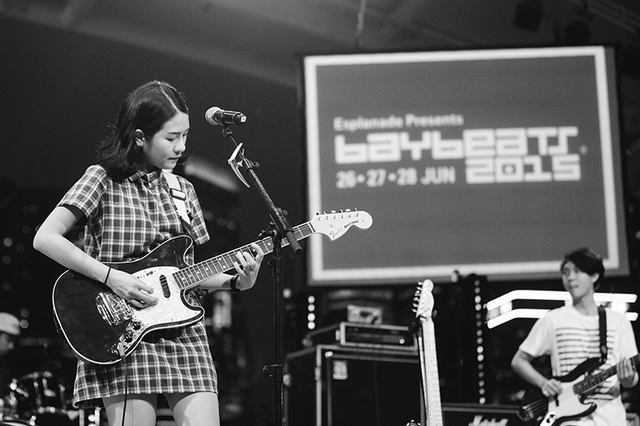 All Glitz: Judging from how much we enjoy Chatuchak market and coconut ice cream, Fwends’ caramel-drizzled tunes gives us yet another reason to adore the land of smiles.

Quirks and Beyond: Sure the band didn't intend to spell their band name right, but they love some proper chicken rice and we love them. Chan rank khun Fwends! (that’s "We love you" in Thai)

Tissue Packet Drama: The area before the Chillout Stage was packed to no end. No one gave us the memo that we needed to chope our seats an hour before. 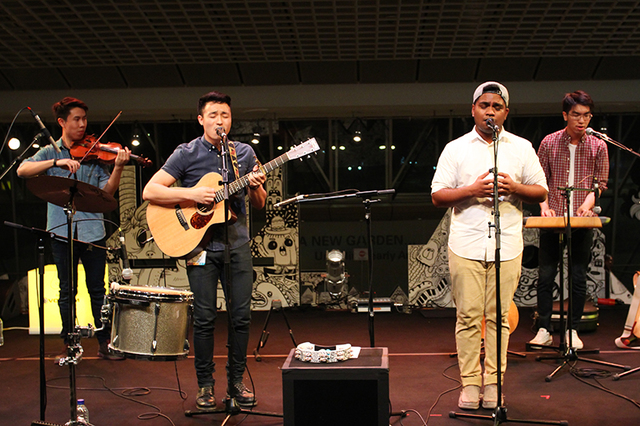 Who: Acoustic outfit flanked by serene violins, uplifting vocal melodies and good looks. Nope, this is not The Sam Willows with Josh Wei.

Seasoned Line Up: After some air time on Channel 5’s ‘The Final One’, finalists Glen Wee and Yuresh Balakrishnan teamed up with keyboardist Winston Koh and violinist Johnson Cheung to form the band.

Rhythm of Love: Age is truly not a number as stillsunrise had the entire crowd and swaying to their harmony-laden melancholy. 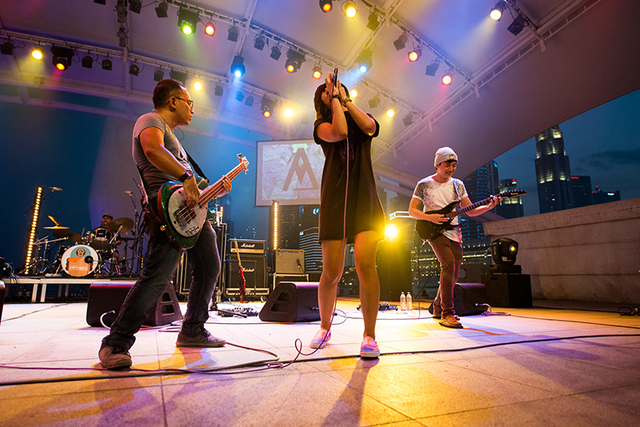 Ethe-what?: Coining a new genre to best describe themselves, Arson calls themselves ethereal hardcore - a mash of hard-hitting guitars and dream-like croons.

Geek talk: The title to their debut EP ephyra is named after cute baby jellyfishes before they mature into dangerous adult medusas — the EP is meant to encapsulate these dangerous yet elegant qualities of the mysterious sea underlings.

Overheard: ‘I’ve never seen bowler hats being used like that.’ 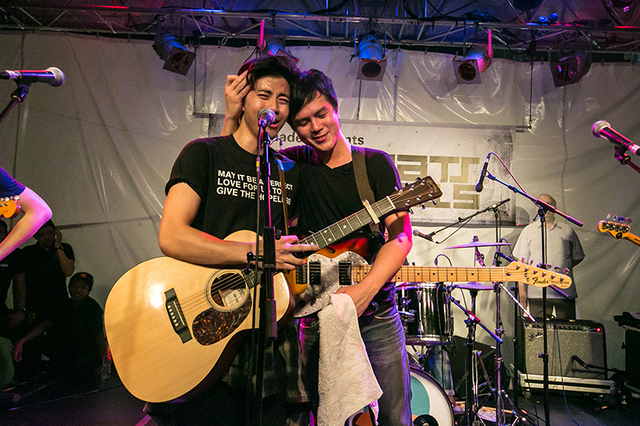 Wake Me Up Before You Go-Go: The influential foursome have been surprising in the gigs they play, often announcing shows without warning despite their hiatus from full-time activity.

Fires At Night: The band sounded as ferocious and masterful as always. With the pushing and shoving and loud sing-alongs, the band hasn't lost touch, especially with the younger crowd as evidenced with their collaborators for that night — Benjamin Kheng from The Sam Willows and 987 DJ Joakim Gomez.

Ben's Thoughts: "I've done a couple of gigs but none being more special / nerve-wrecking than this one. I felt like 17 again, singing my lungs out to Fires At Night in my bedroom, learning the tabs to Candela. Only this time, I was standing alongside my heroes. How they've impacted the scene and many impressionable young musicians; these guys don't know the half of it. The Mixtape stage, as well as the Wake Me Up crew coming back together made the entire weekend so special." 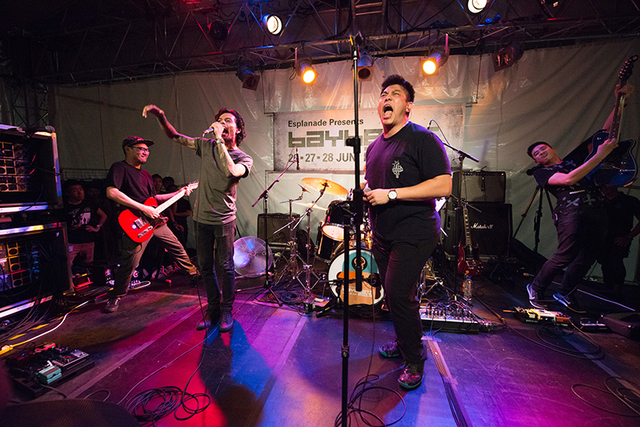 Hypnagogic, dreamlike: Synonyms for the word 'surreal', but definitely applicable to describe seeing the band live on stage again — 13 years after their appearance at the first ever Baybeats. Even more surreal was watching Caracal frontman K.C. Meals perform with the band.

"Hold Me": ...sang many fans present as they enthusiastically belted song after song, overwhelmed with nostalgia.

K.C.'s Thoughts: "Back then, I was short, had spiked hair and loved to body surf, even broke my arm body surfing. And to think a band I grew up listening to wanted to collaborate with me is amazing. I wish I could replay that moment all the time." 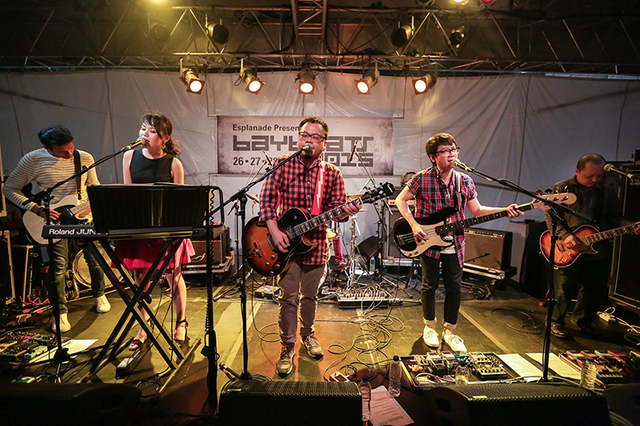 Times New Roamin': The band's made up of grizzled members of the local music scene, notably Patrick Chng of iconic power-pop group The Oddfellows, frontman Yee Chang Kang of The Ordinary People and Robin Chua of Livonia and Shelves. They were also joined by whimsical singer-songwriter Esther Lowless for their Baybeats performance.

Only by Courier: Ever restless and eager to make new music, the band debuted a fresh composition, 'Everything is Classified', a song remarkably more sombre and reflective than most of their songs, laden with hooks and rhythmic charm.

Esther's Thoughts: "I've heard of the individual members in TypeWriter and their achievements in the local music scene way back as a teenager when I first started to know more about local music. So these guys are quite legendary to me. Back when I was 17, I really never thought I would ever get to perform together with them. So it was really, really cool for me. Working with them also got me thinking about how local music has really progressed from year 2000 till now. Every single individual that has ever been involved in local music has made such an impact, whether musician, supporter, organizer, or crew. It's quite moving to think about it." 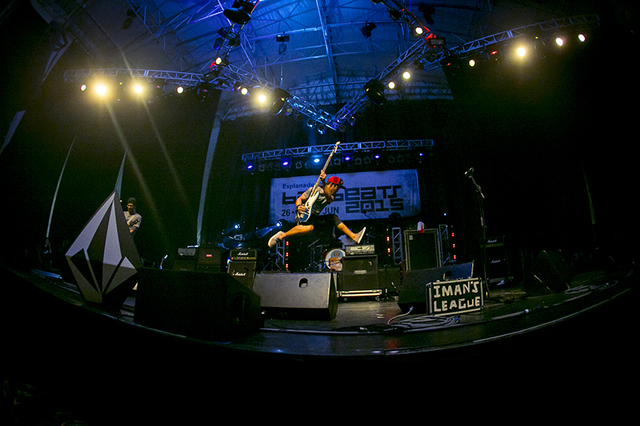 Otakus: The self-styled 'Anime Punk Rock' band recently completed a tour in Japan, making themselves one of the few local bands having conquered the mainland Asian powerhouse.

Overheard: "I would like to see Wiltay collaborate with them." 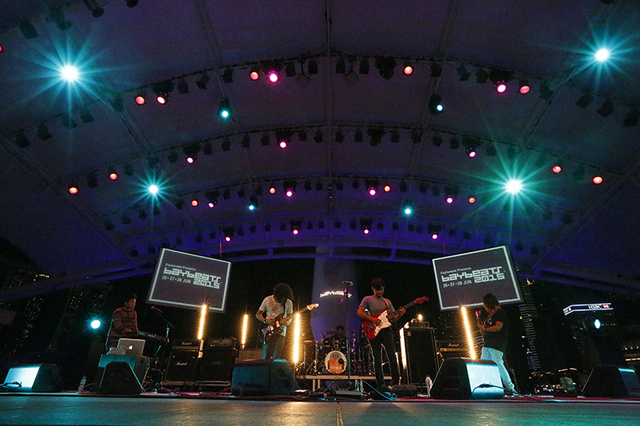 A Shadow of a Sound: ANECHOIS now is certainly different from the ANECHOIS we were introduced to in 2011, and we mean that in the best way possible.

New Beginnings: Adding guitarist Ahmad Khaliq to their lineup has definitely aided their journey towards even more intricate arrangements and powerful melodies that left a lasting impact even after their set.

The Journey Continues: They're also playing on our stage at Orchard Central very soon! 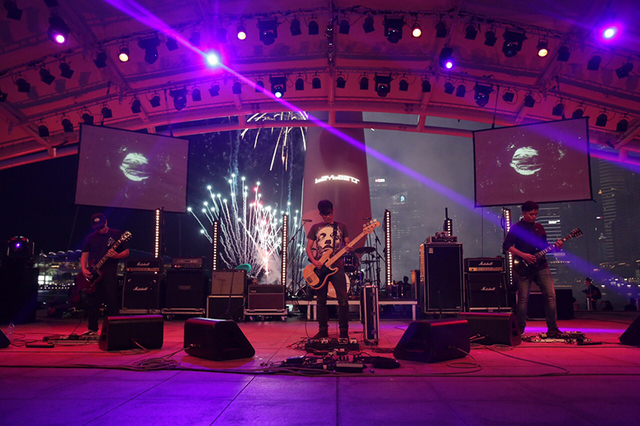 Maximum Volume Yields Maximum Results: Radiant Archery were loud, but we wouldn't have wanted it any other way.

Kindred Spirits: Sharing a similar outlook towards heavy music with bands like Russian Circles and Rosetta, Radiant Archery's all about escapism through abominable fuzz.

Earth-shattering Olympics: This is only the start for Radiant Archery, who we hope to see play more shows. 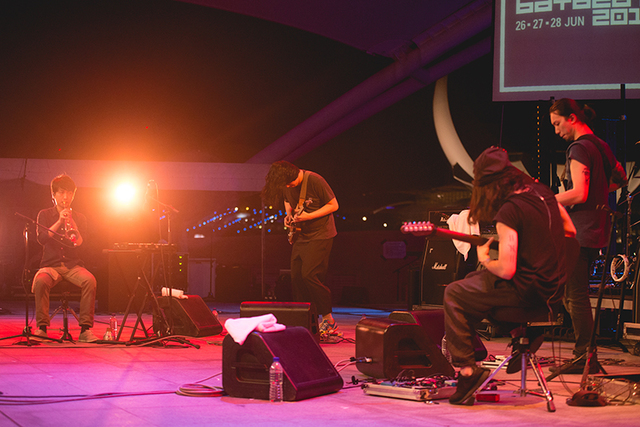 Crescendos and crescendon'ts: The famed Hong Kong post-rock band knows how to make use of crescendos within their 30-minute set, making as much of an emotional impact as a powerful post-rock band can.

God is a Cafe Chef: The guys in tfvsjs have also dedicated themselves to their own cafe back home, serving customers at the establishment — many of whom are ardent fans of the band.

Overheard: "What does tfvsjs stand for?" 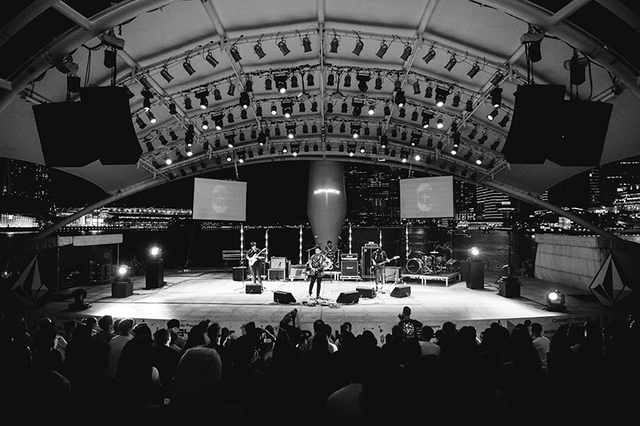 They're Only Filipino: They played as representatives for the Philippines this year, a place we've held dear ever since launching there in April.

As our photographer Jensen puts it best: "This Baybeats was the first time I heard She’s Only Sixteen play, and they ended up among my favourite acts of the entire festival. They were introduced as a garage rock band, and while their music sounded very polished, they lived up to the frenetic, high-energy performance that typifies the genre. You can definitely hear the influences in their music (Arctic Monkeys, particularly) yet they also managed to make it their own sound. All I could think of was that it was hella fun listening to them. Simply put, they rocked!"

Did someone say "sesh"?: Look out for something we did with the band soon! 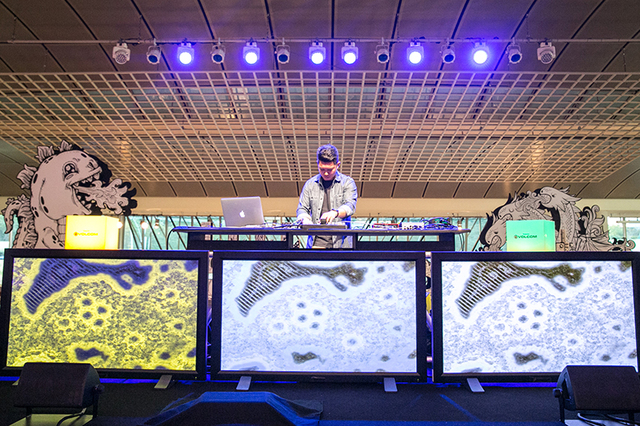 Beats and Beyond: The taciturn Intriguant, real name Louis Quek, proves he's an indomitable force in a new wave of electronic music producers, shunning most trends in search of a greater organic sound. His visuals were pretty damn sleek too.

One with Nature: We're still eagerly waiting for material from his Botanical Orchestra project.

Did You Know?: He's also a Metallica and Rob Zombie fanboy at heart. 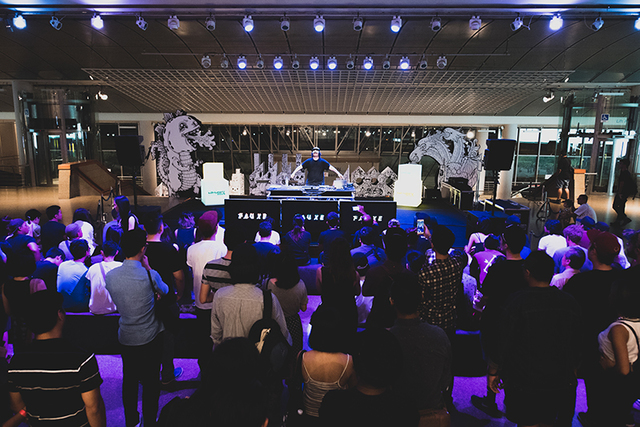 Know Yourself: Fauxe has made an effort to keep his identity a secret, instead preferring to let his music configure his identity. No matter what, his mask has become part of his elusive image and it was evident it's almost becoming an iconic feature of the beatmaker.

Why?: Take a look at the posse of fans and friends wearing Fauxe masks. We want one.

Farewell: His last set was undoubtedly his most emotional. Playing a song off his upcoming debut album, we can't describe much except that it's recorded and you should watch it. And then prepare for (what we assume will be) a pretty devastating album. 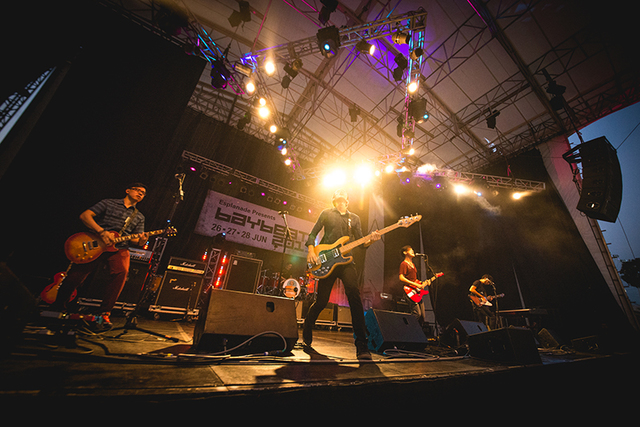 Rise: The five-piece band are still in their infancy stage, but we're hoping for an EP soon.

Fly: If their Baybeats set was any indication, it may not be long for them to be a staple for the local alt-rock crowd.