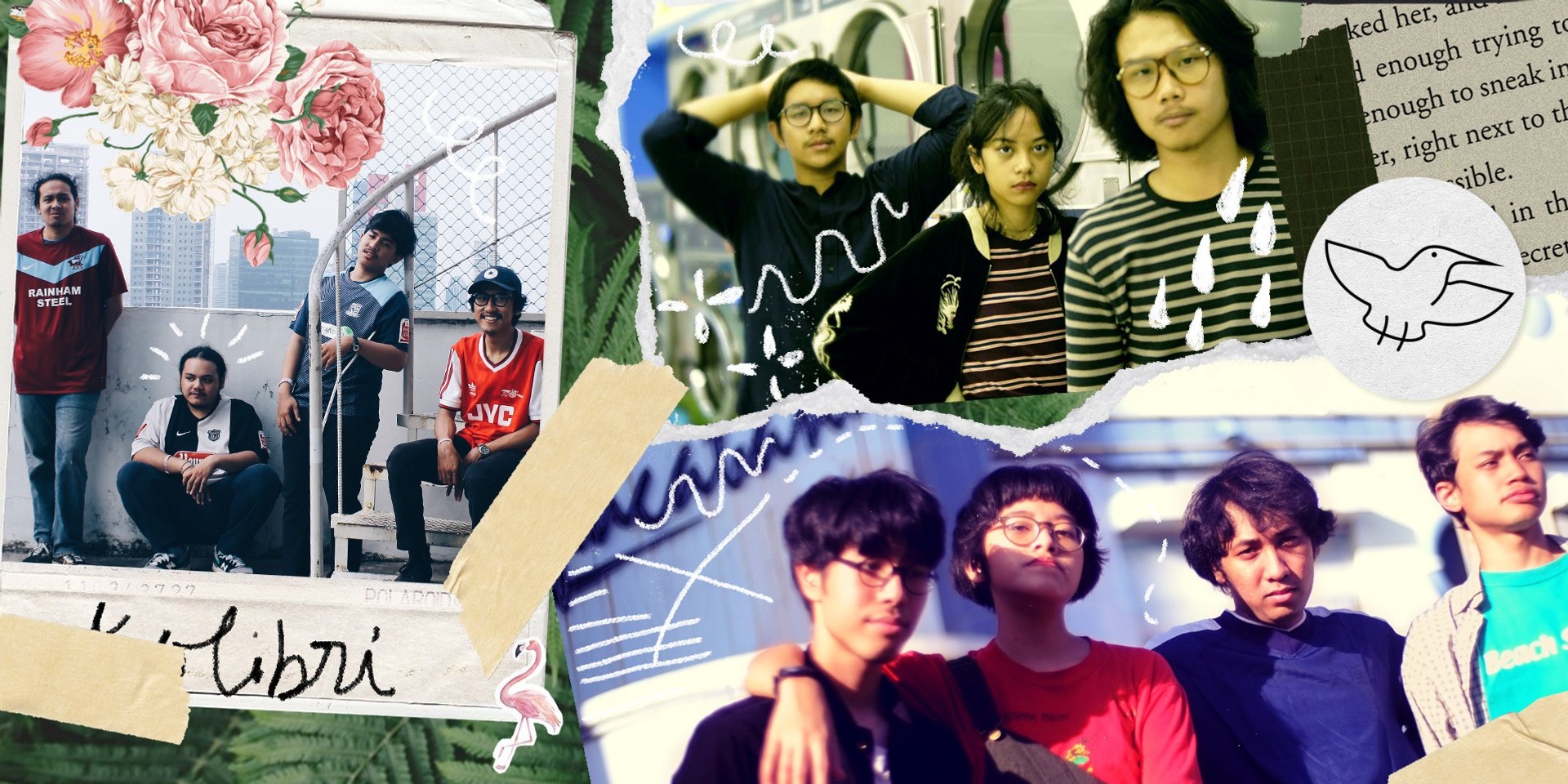 This Friday (06/29) local production crew Almost Crimes will be bringing Kolibri Rekords' indie pop acts Bedchamber, Gizpel, and Grrrl Gang to Manila for a one-night show at Mow's in Quezon City with Hey It's Your Birthday, Megumi Acorda, Narcloudia, and Identikit. The Manila stop of the Indonesia-based bands is only the beginning, as they embark on a tour that takes them across Southeast Asia that closes in early July. Expect to see a "moshpit and blood" at the "greatest rock show" you'll ever see.

Bandwagon caught up with Bedchamber, Gizpel, and Grrrl Gang ahead of their upcoming Manila show to talk about what music fans should expect, what working with Kolibri Rekords has been like, and who their favorite Filipino artists are.

How would you describe the differences in your music from the studio and in a live setting?

Bedchamber: We tend to give our music different values when it comes to studio and live setting. Since the release of our debut Perennial EP, we are known as an indie pop band with a mix of dream pop, post-punk, and a little bit of surf, but we like it intense and more fast-paced when it comes to the live settings to bring more energy to the audience.

Gizpel: We are playing sort of indie pop music that you could find it differently from our records and live set. In records, our music started with slow tempo and a monotone drums, aside, when in the live set we play it more fast, tight, a bit rough. Chill in the records but wicked in live, that's what people think of us.

Grrrl Gang: Grrrl Gang sucks at the studio. We suck more in a live setting!!!

Tells us about your journey toward working with Kolibri Rekords.

Bedchamber: It's funny because some of us are actually the people behind it! So it was around 2014 when we are about to record our first single but we literally know NOTHING about who or how will we gonna release it. So our then-become-manager friend Daffa Andika and our vocalist Ratta Bill initiated to start their very own record label so we can all be working together. With no clue and expectation at all, we started to do our own thing and learn as we go by. We even recorded our first EP by ourselves even though no one has a sound-engineering background because getting to a real studio felt too pricey and intimidating for us lol. We then went on tours and released our debut album through them. These past five years have been a thrill ride for us! It is also feel so great to have a label with so much liberty on our hands.

Gizpel: Kolibri has been more than just a record label for us, they literally are friends, because we are not just doing music-related stuff. We do hang out and football sometimes. We are really happy working with them, because we share visions, about how we run a band, a label, vice versa. And we never see any independent label that will fit us more than Kolibri Rekords.

Grrrl Gang: We've been friends with Kolibri kids for ages. We also organized Kolibri Rekords' first tour in Yogyakarta, where we come from, several years ago. So basically we already know how the label works and turns out, they're interested in releasing our EP. That's about it.

What's the local music scene like in Indonesia? How does it differ from other countries you've played in?

Bedchamber: The music scene in Indonesia is very vibrant. We'd say we had a hard time making the bands to get on people's radar because it's not that easy to compete with mainstream or western music but once you go deep, you could find many interesting bands on almost any genres spreading on our islands. To name some local bands we're currently in love are the post-hardcore/emo trio Vague, art-punk newcomer Tarrkam, Bandung city nu-gaze Heals, indie pop sweetheart Sharesprings and 90's indie rock revival Barefood. Try spare a moment to listen!

Gizpel: Recently, Indonesian music scene are doing great, a plural scene consist of genres and regenerative bands. We can enjoy cross-genre gigs, and still feel comfortable. We are so thrilled because Manila is gonna be our first abroad show. Let's see what the differ would be!

Grrrl Gang: We've actually never played abroad before, so this is going to be our first time to play overseas and we're really excited about it.

To explain our local music scene, especially Yogyakarta, it's been flourishing in recent years. Yogyakarta is divided into two areas, the South and the North. In the South, you can find obscure-out-of-your-mind bands formed by art school students. While in the north, you can find more "common" bands that are really interesting to check.

What Yogyakarta lacks are venues unlike Jakarta or other cities in Indonesia. Mostly, the kids here organize shows at their friend's house, campus basement or a fucking barbershop (we basically organize shows anywhere with electricity, of course). But that's the beauty of it, my dude. You should try it yourself.

Are there any Filipino bands and artists you're currently listening to?

Bedchamber: Rivermaya and Bamboo was very big back then in Indonesia, lol. But recently we just listened to Hey! It's Your Birthday's 'Dead Cat' and fell in love suddenly. Hope to find out more great acts as we play there!

Gizpel: Memory Drawers! I love their live set, using drum machine! That's cool! Sadly they are not playing with us at Manila show :(

Grrrl Gang: I think Akbar, our bassist, listens to this Filipino pop band, called Sour Cheeks. And of course, we know Christian Bautista. Our moms love him.

What should we expect at your upcoming Manila show?

Bedchamber: Of course the greatest rock show you will ever had in your lifetime!!!

Gizpel: Expect us to wear our local football team jersey at the show. Other than that, it's a secret. But we promise you songs to mosh with!

Bedchamber, Gizpel, and Grrrl Gang are slated to perform at Kolibri Rekords' upcoming showcase at Mow's in Quezon City on June 29 (Friday). Tickets will be available at the door for PHP 500. 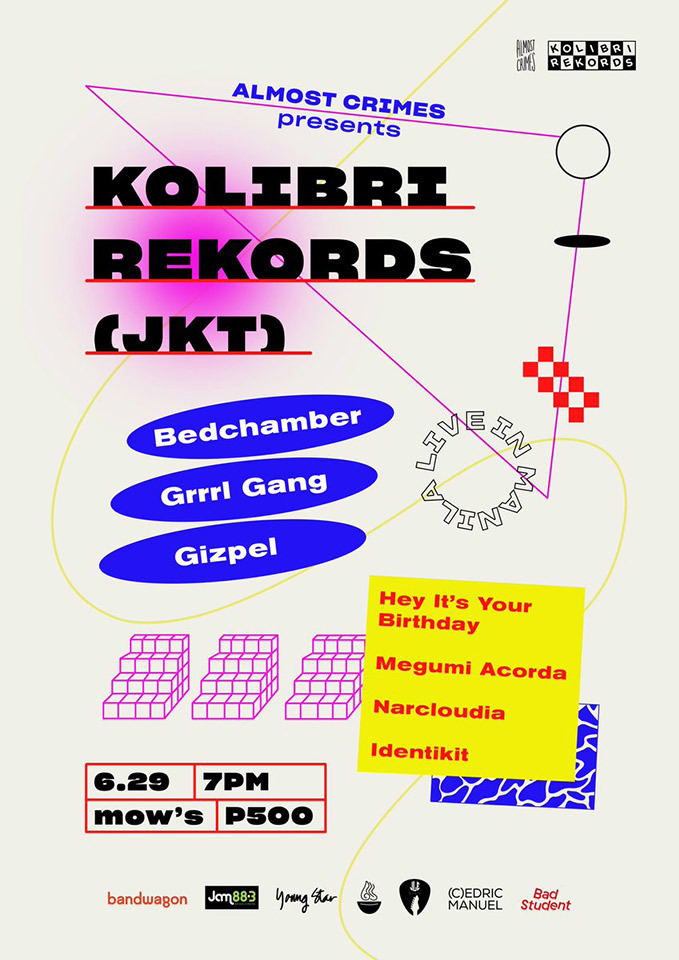