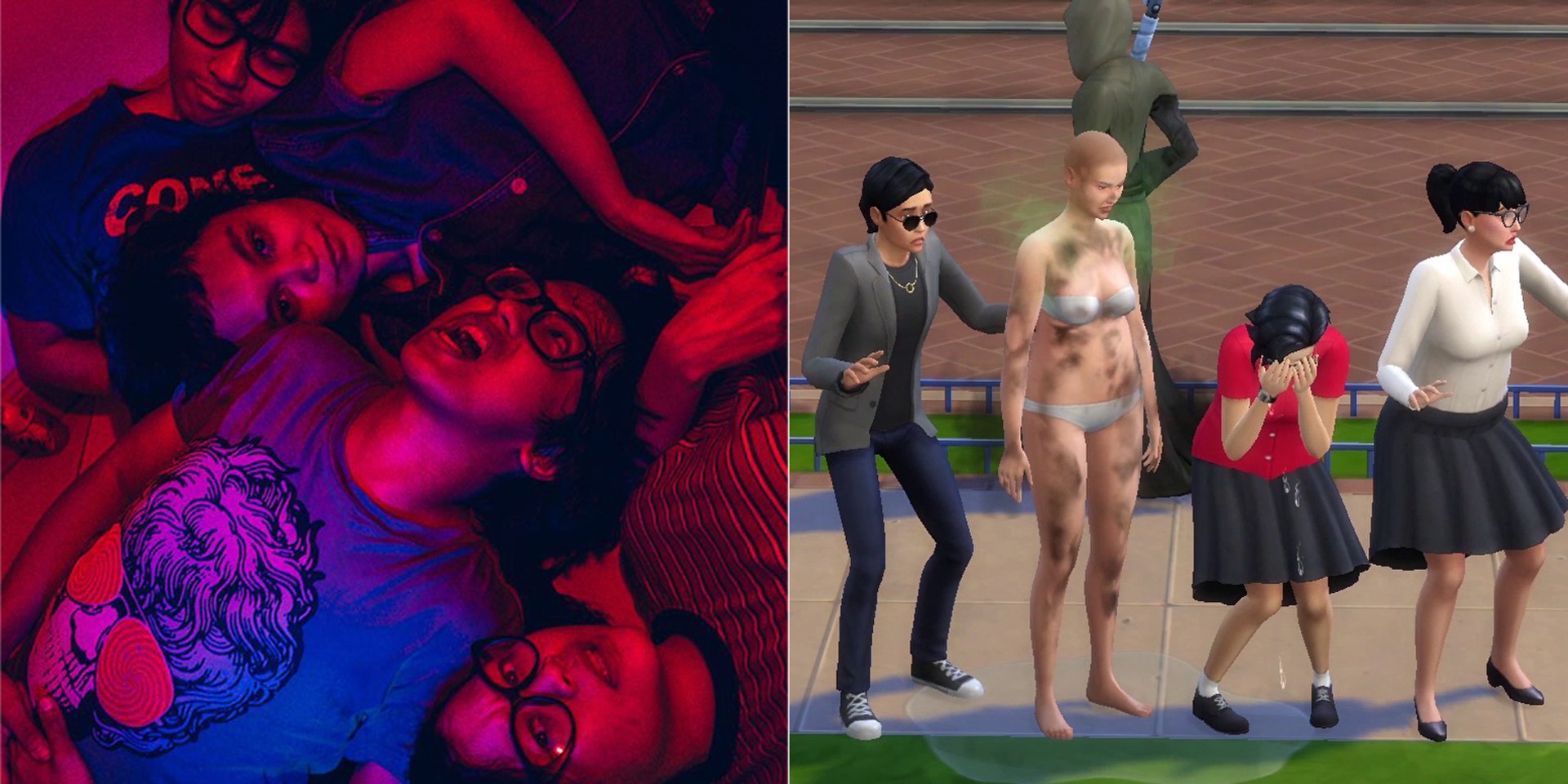 The Buildings are taking you into a world of augmented reality with their latest visual.

On Sunday (05/02), the Filipino rock band dropped the official music video for their single 'Flesh and Code', which was created on the wildly popular life simulation video game The Sims 4.

Bandwagon caught up with The Buildings and director Pat Kay Laudencia to talk about the trippy new music video for 'Flesh and Code', what it's like working on their sophomore album Heaven is a Long Exhale in the middle of a pandemic, and the band's plans for the rest of the year.

How did you first come up with the idea of shooting the 'Flesh and Code' music video on The Sims?

Mariah: I’m a big fan of Pat Kay’s work, and she’s been working with The Sims for a while now. She mentioned that she wanted to direct a music video for The Buildings on The Sims, even before the pandemic. And 'Flesh and Code' springs from this feeling of being reminded that you’re living in an augmented reality and coming to terms with that.

I find The Sims 4 funny in that it’s addictive, yet you’re doing the same things that you do in everyday life. Some people try to keep a household functioning while others deliberately orchestrate utter chaos. Some people just want to burn down the house. 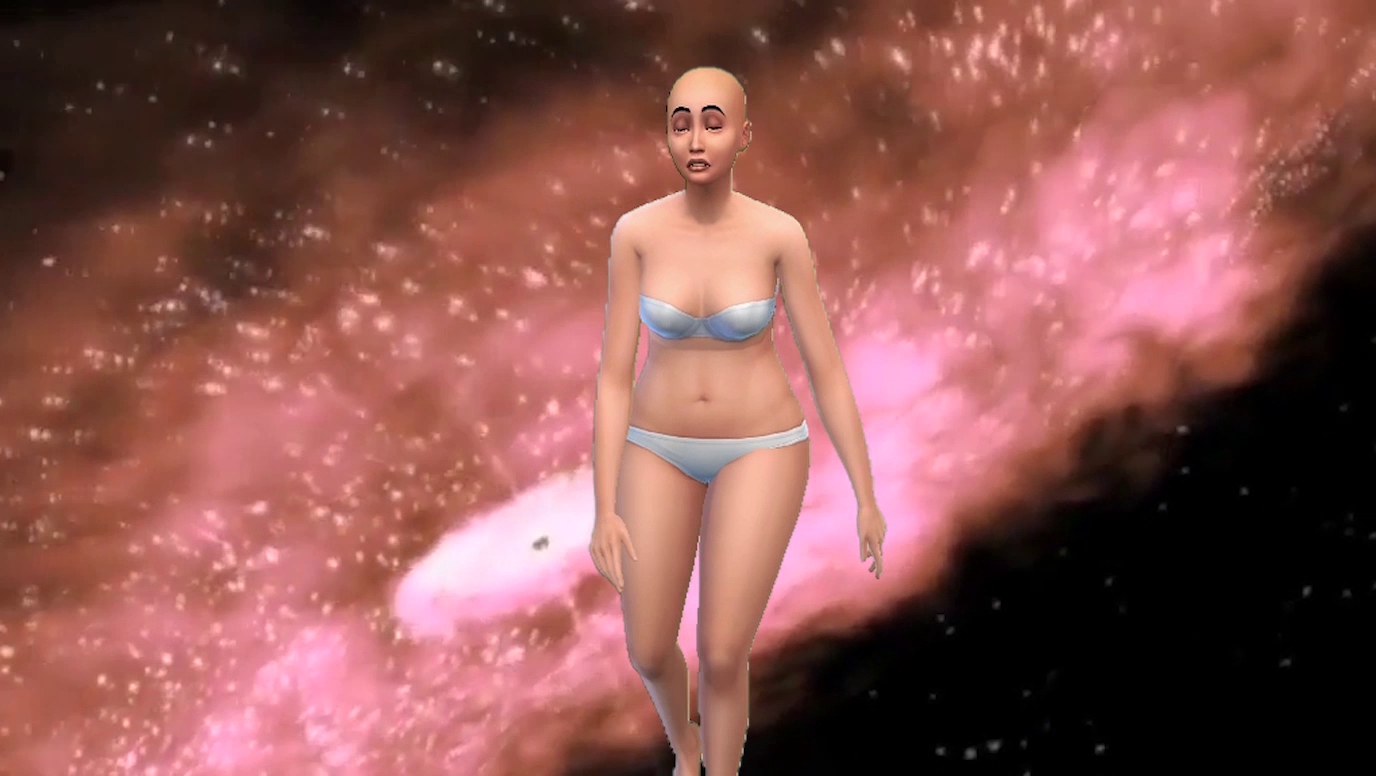 Pat Kay: I had this character in mind while hearing the song at first. I wanted this mannequin-like figure with not much of an identity go through everyday human things that we repeat every day in order to survive. Things like sleeping, eating, taking a bath, and working. It had to be this endless cycle.

Since Sims have mood meter where if you don’t fulfill their needs, they become stressed out and sad like humans so most of the time I had to torture the Sim in the game to get a lot of the shots I needed. It was like a whole Sims masterclass in acting.

I almost felt evil because the Sim was never in a good mood! I also built the whole world from scratch and made sure to make everything as bare and suffocating as possible.

Mariah: We’ve already used video games on our lyric video for 'Climb Over the Gate' which we released in 2020 on RPG Maker. Our album launch is also going to be on Club Matryoshka in Minecraft. The video games weren’t intentional, but it just happened naturally—where else can people gather?

Dom: If it fits what we will do in the future, I don’t see why not. Video games still sort of have a negative image, like it might feel too tacky or gimmicky for a “serious” rock band.

As Mariah said, it just happened naturally and serendipitously; we’ve been spending a lot of time playing games these past months but somehow, video games as a subject meshes well with some of our album’s themes like isolation, routine, fatigue, and time. 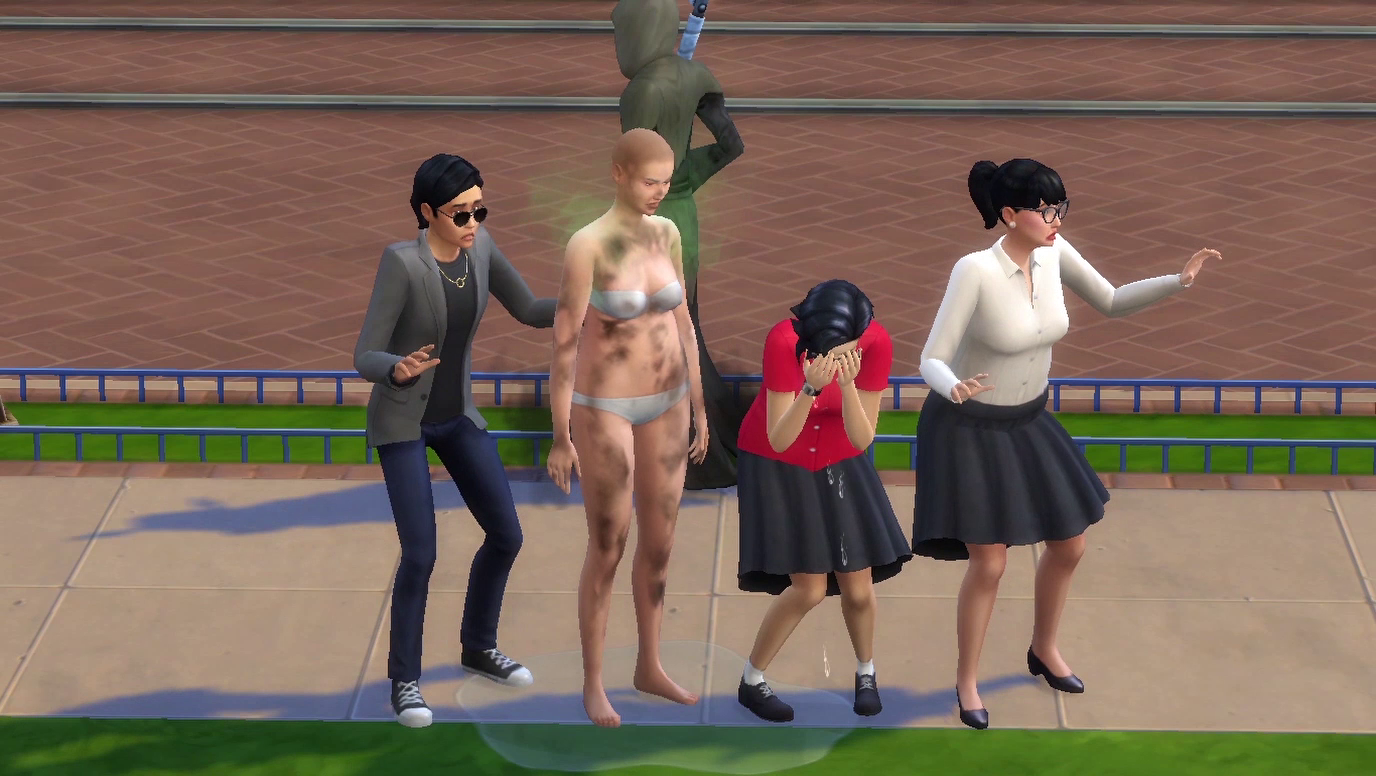 Can you tell us a little more about Heaven is a Long Exhale and what we can expect?

Dom: We have been working on Heaven is a Long Exhale intermittently throughout the five years since we released Cell-O-Phane. I guess we only started really working on the album last year shortly before the lockdown. Some of the tracks on HIALE were written shortly after our first album which we were able to refine through our live performances and we had already recorded demos of, but several tracks on HIALE were only written and arranged when the lockdown was already in effect.

In a way, HIALE presents us working with the studio as an instrument in its own right, finding ways to work around quarantine and social distancing, rather than us trying to recreate the energy of our live performances.

As with many sophomore albums, we also flex our new gear, but I think HIALE is mostly restrained and focused whereas Cell-O-Phane was youthfully shambolic. We tried to harness the energy of Cell-O-Phane, channel it to explore greater heights and even deeper depths.

Mariah: The second album took a long time to make. I had to get out of the mindset of writing songs with playing them live in mind. What you play onstage won’t necessarily translate as well in the studio, and vice versa. I’m of the mindset that every decision, no matter how seemingly small, should serve the song.

So I had to break out of that mindset of a skeleton of a band template and really focus on the songs themselves. So not all of us play on all of the songs, nor did we stick to our respective roles live.

It’s way different from Cell-O-Phane which was recorded comparatively quickly because we had played the songs over and over live. We haven’t even  figured out how to play some of these songs live yet. Also, I’ve been thinking about how less is more, especially guitar-wise. 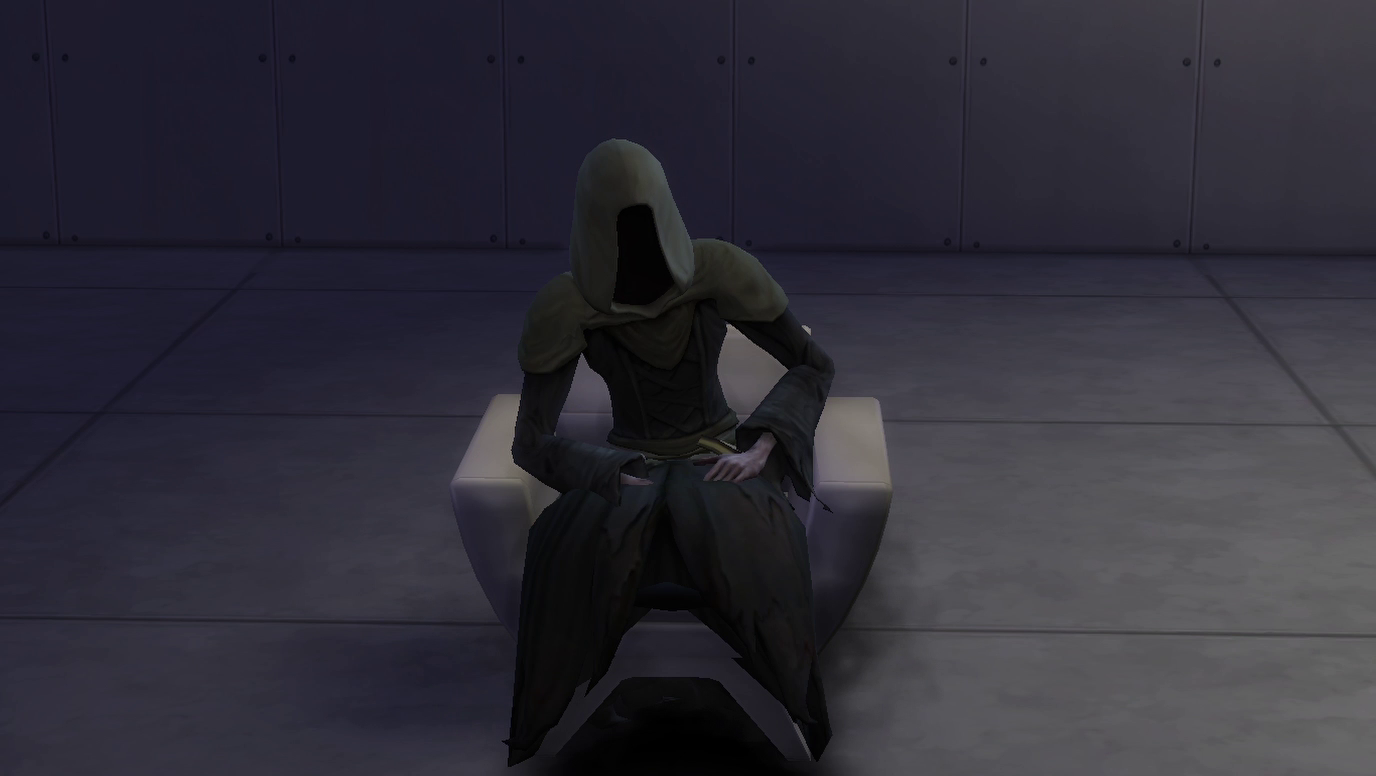 What's it like working with Call And Response Records? How did you connect with them?

Mariah: They’re good friends of mine from when I lived in Japan. The owner, Ian, and the musicians of Call and Response Records basically adopted me when I was 21, and showed me around the underground music scene of West Tokyo. They were supposed to release our album in time for a 2021 tour in Japan, but the pandemic happened. At least we’re pushing through with the album somehow.

Why collaborate with a foreign label?

Mariah: Foreign or not, Call and Response believes in us. Why not?

What are your plans for the rest of the year, following the release of your album?

Mariah: Release new singles, recording performances, and resting. This album took five years to make. I guess we have a track record of taking our time. But what I miss most is playing shows, and that’s what I’m looking forward to the most.

The Building are releasing their new album Heaven is a Long Exhale on Minecraft venue Club Matryoshka. The launch party, entitled Melting the Goblin, is happening on 6 June, 7 PM PHT/SGT (8 PM KST/JST). Join the party here. 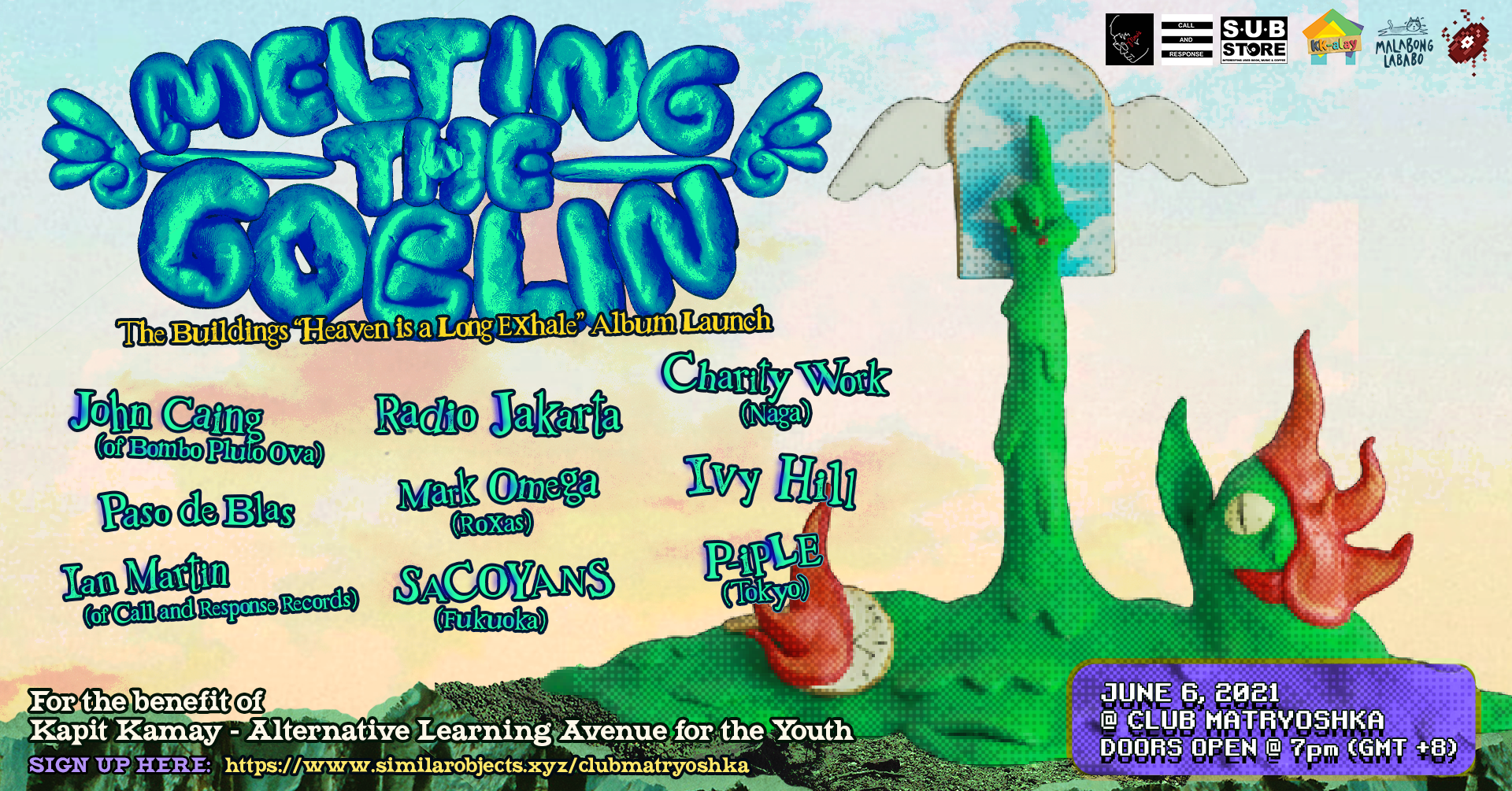