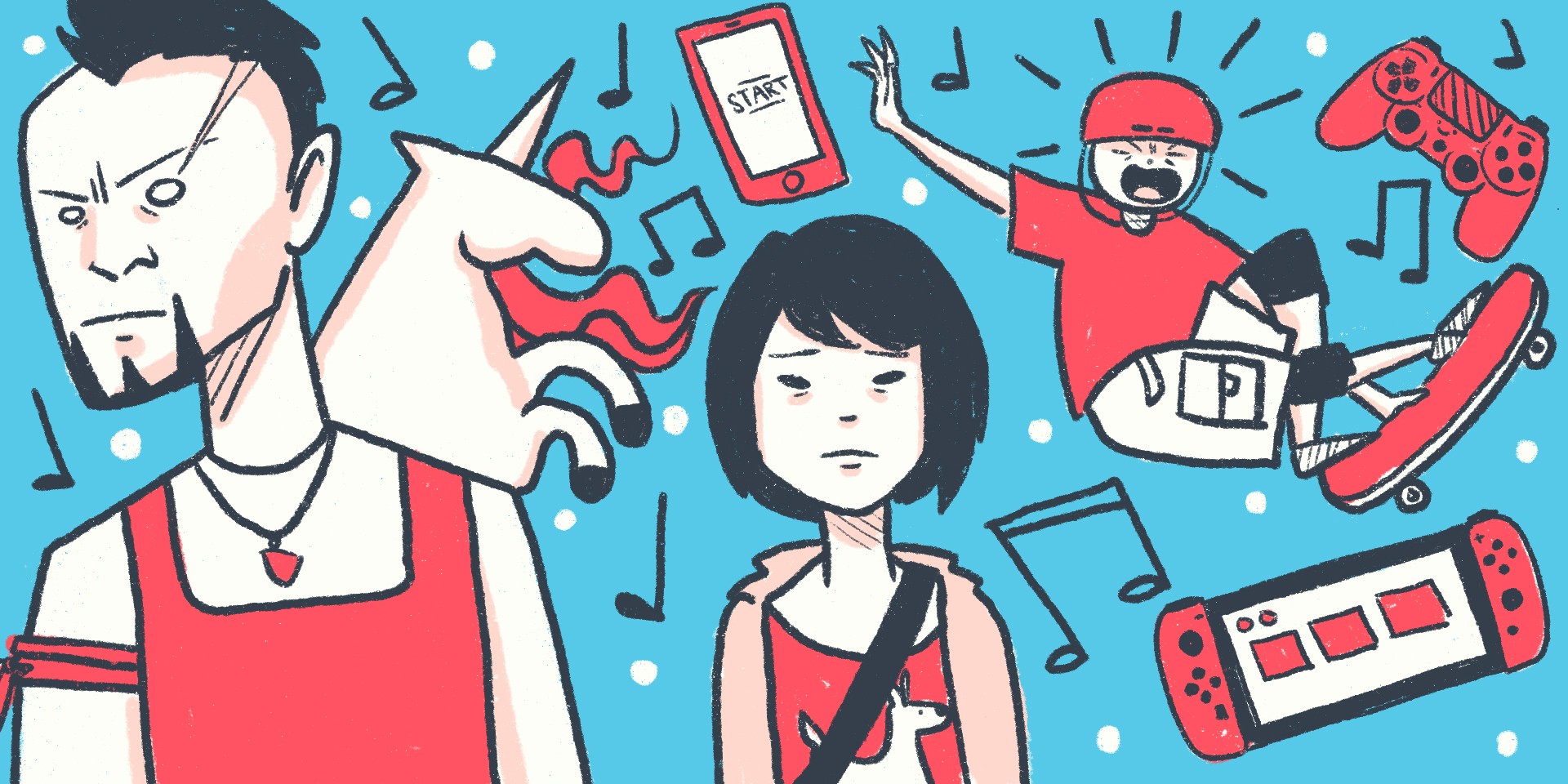 The gaming world is an excellent platform to have a wicked good time.

It's more than just button mashing. It's a whole other universe where you could dive in and be someone else, do things you never could in the ordinary world, and simply be free.

Just think of it—you running through a minefield, explosions all around you, your comrades shouting in your ears, and heavy metal blaring in the background. Or possibly you enjoying the peaceful island life, fishing by the sea, digging up fossils, and catching bugs while soothing music pushes all your worries away. Whatever you fancy, there's always the right game paired with awesome music you'll love.

Here are a bunch of video games with amazing soundtracks, featuring some of your favorite bands and their brilliant tracks.

Riot Games have been going hard with their titles to the point that they've created their own virtual bands. By using champions from League of Legends, the game developer created three musical acts—K/DA, Pentakill, and True Damage.

Let's face it—before Guitar Hero, you picked up a lot of your punk rock skater jams from the classic Tony Hawk Pro Skater. This was the game that introduced you and made you fall in love with Goldfinger's 'Superman,' Rage Against the Machine's 'Guerilla Radio,' and The Ramones' 'Blitzkrieg Bop.'

Tony Hawk's Pro Skater 1 + 2 is the leveled up version of its '90s and early '00s predecessors for today's consoles and PC. It includes a handful of additional tracks from the likes of A Tribe Called Quest, Machine Gun Kelly, Reel Big Fish, and The Ataris on top of its iconic soundtrack.

There's no better soundtrack to set up your rides or run away from the cops than with the extensive catalog from Need For Speed, which is packed with music by Rob Zombie, Static-X, Celldweller, Lil Jon & The Eastside Boys, The Prodigy, Xzibit, The Killing Joke, and more.

The 2014 first-person-shooter Destiny features 'Hope for the Future', a song written by Paul McCartney for the game itself. It even comes with a Halo-style music video with a hologram McCartney. Besides offering 'Hope for the Future' to the game, McCartney also worked with Destiny composer and director Martin O'Donnell and co-writers Michael Salvatori and C. Paul Johnson for the 42-track instrumental soundstrack.

For Final Fantasy Brave Exvius, a turn-based game on mobile, Square Enix linked with Ariana Grande and Katy Perry to make their video game debuts, where they shared their own music and also became playable characters.

Ariana Grande's 'Touch It' from her 2016 album Dangerous Woman got a gorgeous makeover with a 52-piece orchestra led by Sebastian Cano-Besquet. Katy Perry on the other hand shared an original track called 'Immortal Flame', which also appeared in the game.

Without a doubt, Kick the Hornet's Nest—that mission on Far Cry 3 where you burn down fields of weed with a flamethrower and evidently have to fight off pirates while you're high—is one of the best moments in gaming history. And what makes it even more epic is the track that backs it up—Skrillex and Damian Marley's 'Make It Bun Dem.'

Life Is Strange 2, which came out in 2018 and ended in late 2019, follows the heartbreaking story of brothers Sean and Daniel as they try to understand Daniel's unexplainable abilities and escape to Mexico after an accident outside their Seattle home forces them to run away. Its soundtrack comes with music by Phoenix, Bloc Party, Gorillaz, and Sufjan Stevens.

This game has only one song and it's going to keep playing even after you die. Whether you love it or you hate it, Adult Swim's endless running flash game, Robot Unicorn Attack, is a sure classic from 2010 that will beat your skull with an eternal loop of Erasure's popular synthpop ballad 'Always.'

In Lollipop Chainsaw, you're a perky cheerleader named Juliet who slays zombies with the head of your boyfriend (still alive and talking, mind you) strapped to your hip. This game features an interesting selection of songs from different ends of the spectrum from the likes of The Chordettes, Joan Jett and the Blackhearts, Five Finger Death Punch, to Children of Bodom.

The Sims has a way of completely taking over our lives. Besides the fact that the game lets you do things you wish you could be doing right now (like taking a shower, ordering a pizza, or walking outside), it even has music from the real world in Simlish. Yes, they totally got Paramore, Carly Rae Jepsen, Katy Perry, My Chemical Romance, The Pussycat Dolls, and Depeche Mode to re-record some of their biggest hits for the game.

If you're on the lookout for a game with excellent industrial metal music, you can't go wrong with Ninja Theory's DMC: Devil May Cry. The soundtrack was created by aggrotech band Combrichrist and takes them down a more metal-oriented path compared to previous work.

Avenged Sevenfold's love for Call of Duty is forever. It's clear with how several of their songs were tapped into the franchise. They even got on board to compose 'Not Ready to Die,' 'Carry On,' 'Jade Helm,' and 'Mad Hatter' specifically for the games.

Oh, and in case you didn't know, you can even play as A7X's frontman M. Shadows in Call of Duty: Black Ops 4.

Grand Theft Auto has always had an incredible soundtrack. Each installment of the Rockstar game comes with at least 200 songs and hilarious radio commercials that will keep your ears entertained through whatever havoc you may unleash upon the city. You don't just get to have fun blowing up stuff. You also get introduced to some awesome bands and music artists you might've been sleeping on through your entire life.

If Jack Black were a video game, he'd be Brütal Legend. Well, he did voice the protagonist Eddie Riggs, but that's besides the fact. This game is all about raising hell against supernatural overlords with the power of metal and music by Slayer, Marilyn Manson, Ozzy Osbourne, Scorpions, Mastodon, Testament, KISS, In Flames, Cradle of Filth, and more.

Death Stranding, which stars The Walking Dead's crossbow-wielding badass Norman Reedus, is pretty much a Grab Express simulator backed by a soundtrack featuring CHVRCHES, Bring Me the Horizon, Major Lazer, and Alan Walker that will take you down a confusing but emotional ride.