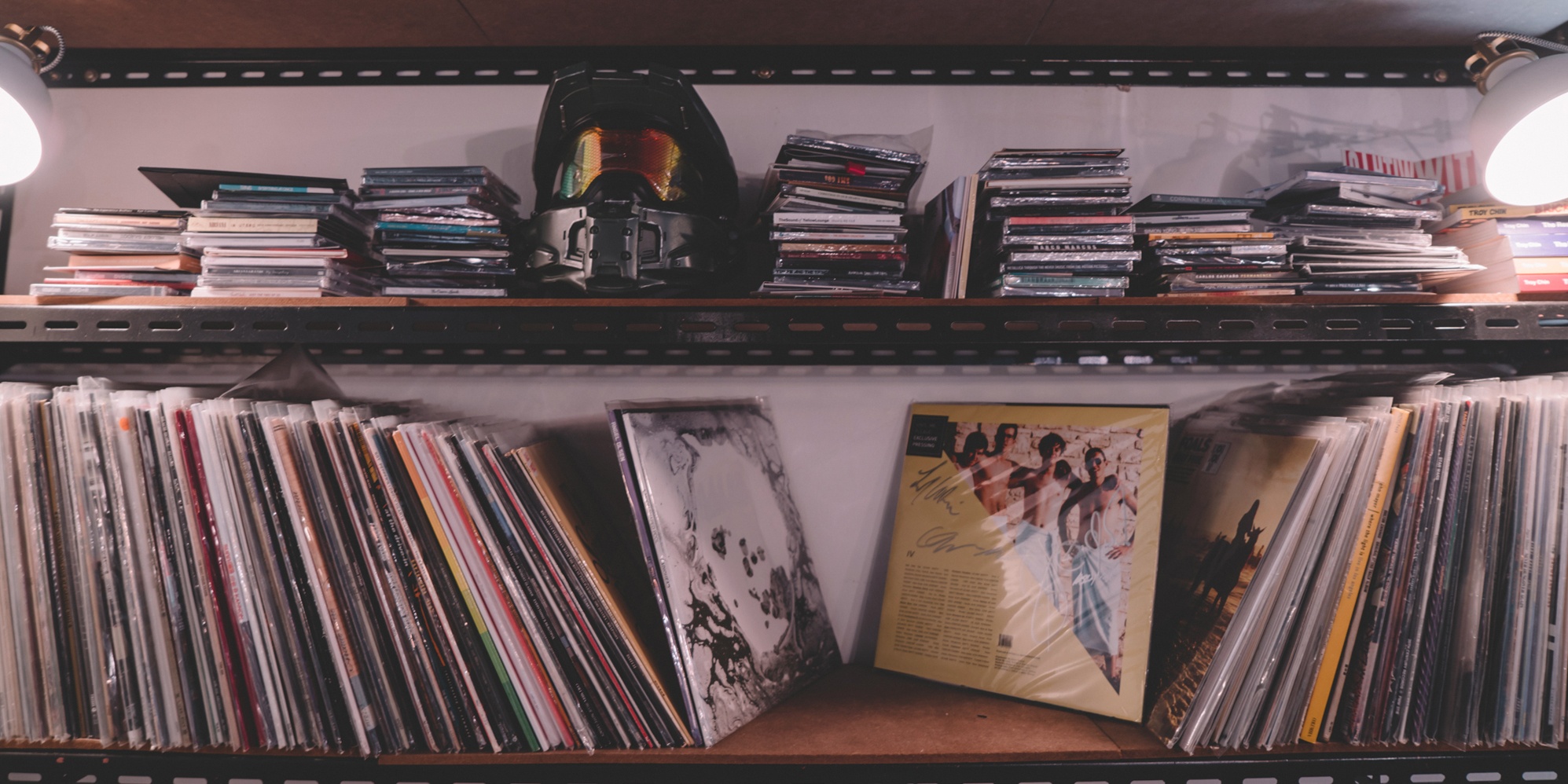 As much as we were happy to move into 2017, here's one last 2016 list to tide you over before the onslaught of new music begins.

We asked a wide range of people involved behind-the-scenes in Singaporean music — whether if it's radio, talent management or concert promotion — and here's what they have to say.

I love my boy-girl electronic duos, which has been a great tradition for me, from Portishead and Lamb to Alina Baraz and Galimatias.

The brother-sister duo, Broods, doesn’t reinvent the wheel by doing anything really new, other than writing really great hands-in-the-air electronic pop tunes. The melodies in the lead single ‘Free’ are extremely soaring, coupled with the defiant opener: “I’d lose everything so that I can sing/ Hallejuah, I'm free!”. Sibei garang. I like.

Most of the lyrics deal with heartbreak and loss, so it’s excellent for peeps who like their electronic music mopey. Singer Georgia Nott delivers that in full on the second single ‘Heartlines’, which is co-written by fellow New Zealander Lorde. The album is both uplifting while introspective at the same time. Love it.

If BADABADNOTGOOD and Charlie Lim had a kid, it will be this guy.

River Tiber's pop culture credentials are pretty banging too. Drake sampled him on 'No Tellin'. He's worked with BADABADNOTGOOD, Kaytranada and Pusha T.

‘No Talk’ (which Drake sampled) is such a mindfuck where the drums are floating on top of the pulsing synth chords in an extremely arrhythmic way. The aching vocals repeating “No talk” is a great reprieve from all those swirling sounds. Really beautiful. The third track ‘Acid Test’ is when River Tiber gets down to business by laying down a sweet R&B falsetto on top of a thunderous old school funk/ hip-hop beat.

He’s like a more R&B James Blake, which works very well for me.

I know I can only do three albums but hey, I couldn’t decide between these two albums.

I think cute girls who do genre-blending music are extremely adorable, like Kimbra. I discovered Jain a few weeks ago when I saw her reality bending music videos ‘Come’ and ‘Makeba’. The latter song has an amazing video and a serpentine synth bassline which is awesome. Jain kept the arrangement very simple, concentrating on the world music-esque chorus and pounding backbeat. Really like how this song is put together.

Beside my love for cute girls who do genre-blending music, I like my hot R&B mamas too. I still haven’t watched the visual album yet but the audio side of this album is such a statement.

But while everyone is fixated on the fact that she’s calling out Jay-Z’s infidelity indirectly, I’m focusing on the music. She sampled Led Zeppelin’s ‘When The Levee Breaks’ on ‘Don’t Hurt Yourself’ for fuck’s sake! Jack White did an insane job on the tune.

The guest spots on ‘6 Inch’ and ‘Freedom’ by The Weeknd and Kendrick Lamar are pretty spot on, too. And of course, she has to close the album with the new female-pride anthem ‘Formation’. Slay.

So lucky to stumble across this promising producer! The vocal samples (that Hinton tirelessly trawled through hundreds of hours worth of obscure YouTube footage) make the album so deep and raw. Truly a deeply introspective and well-crafted masterpiece formed by elements of grime, jungle and ambient atmospheres.

Tycho’s tasteful and dreamy complex soundscapes have the ability to transcend me to a warm and blissful realm. Listen to ‘Horizon’ and you’ll know what I mean. Looking forward to catching the band at Laneway Festival next month!

EVERYTHING AND NOTHING | Hammock

One of the most underrated ambient/post-rock bands out there. Powerfully evocative, comforting and reflective. Close your eyes and listen. My go-to album when the physical world gets too overwhelming for my introverted personality.

Spotify stats don't lie, 'Honey' was my most played track this year but it could very well have been any of the other nine songs on the album. This album summarizes the whirlwind of emotion that is 2016 — melancholic, introspective, bittersweet.

Death of A Bachelor | Panic! At The Disco

I foresee a lot of hatemails from diehard fans who swear by A Fever You Can't Sweat Out, but I dare say that this album is their best to date.

There's no denying that Brendon Urie is a talented songwriter and a true performer (throwback to his show at Suntec in August). This album is filled with enough anthemic goodness/feel-good pop songs to appease the mainstream audience while keeping things fresh and interesting.

A Head Full of Dreams | Coldplay

Technically, the album was released in 2015 albeit in December.

Also, no one actually puts Coldplay as artist of the year, let alone, album of the year. But there's something about this album that gets me hooked. 'Everglow', 'Amazing Day' and 'Up&Up' hit me right in the feels and that guitar riff in 'Adventure of a Lifetime' is too catchy!

It may not be as polished or groundbreaking as her previous records but there’s so much to love about this album. With AIM, M.I.A.’s message comes full circle even if it means putting down the swords and saying with a sigh “it is what it is”.

The first time I heard Effects, it was just a demo that Chris [Jones] sent to me over WhatsApp. It knocked the wind out of my lungs. I was going through a really rough time and that song just... silenced the noise of whatever I was going through. Track by track, it’s like a breathing exercise, exhale, exhale till I feel lighter and by the end of the five songs in this EP, I’m just left bare.

It's a powerful, wonderfully written record that I hope more people will discover and a teaser for great things to come. This kid (I guess now, teen) is just getting started.

As I always say, when life gets you down… Keep calm and be  Yoncé.

I think a lot of my top albums have already been mentioned so I'm gonna mention some underrated ones that I feel deserve more attention. I've been getting into a lot of softer ambient/vaporwave stuff this year — especially in Singapore with our fast-paced culture, it's important to slow down sometimes. These albums have been great in transporting me to places where time feels warped.

Released on one of my favourite labels, Orchid Tapes, this duo creates ASMR-esque soundscapes. Great for peaceful walks alone. A great zoning out album. Listen from start to end in one sitting.

Released on New Zealand based tape label New World. I was drawn to the gorgeous artwork. I'm a huge fan of vaporwave and I think the genre is truly misunderstood. Echochamber takes vaporwave elements and makes it his own. From slow ambient tracks to mid-tempo lo-fi Beats. I specifically love the soft Japanese vocal samples. Once again, very ASMR-esque.

Vaporwave giants 2814 (HKE + Telepath) released their follow up record Rain Temple earlier this year on the iconic Dream Catalogue. Gorgeous synths, massive textures yet extremely subtle at the same time. These guys have been pushing vaporwave to a very serious level and this album is a great showing of what the genre can be if done right. From the first track, you're instantly transported into this "future-Japan" world — think Blade Runner.

Probably my most played of the year, absolutely killed it.

Justin really pushed the boat out on this one and it's an incredibly compelling record. The Asia shows were special and I can't wait to see the new tracks performed live.

These guys are great and I love the new record — 'Time Moves Slow' has got to be up there for track of the year.