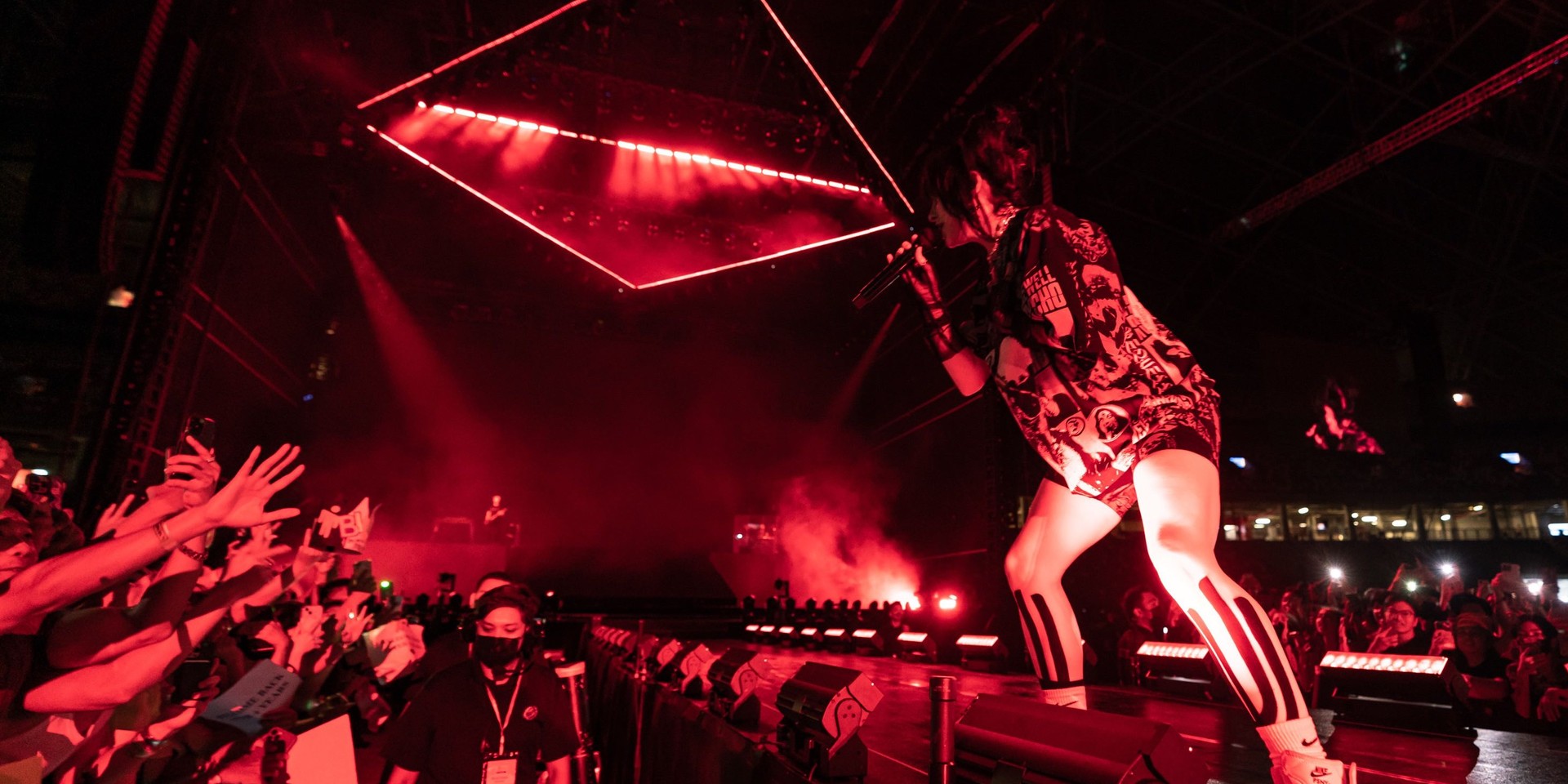 To say that a lot happened in the four-and-a-half-year gap between Billie Eilish's first visit to Singapore and her latest one would be a huge understatement.

When she took the stage at the 2018 edition of the St. Jerome's Laneway Festival, the then 16-year-old American singer-songwriter was still a young artist on the rise.

Not long after, she went on to release not one, but two critically acclaimed and commercially successful albums, When We All Fall Asleep, Where Do We Go? (2019) and Happier Than Ever (2021), collect multiple accolades, including seven GRAMMY Awards, a Golden Globe Award, and an Academy Award, and amass a massive international following.

On 21 August 2022, Billie returned to the Lion City as a full-fledged superstar. "Singapore was one of the first places that I ever went and did a show. My first serious festival was Laneway, and I had the time of my life," the 20-year-old told the audience at the National Stadium.

She continued: "I remember sitting on stage in Singapore at that show and thinking, 'This is the coolest sh*t I'm going to ever get to do and I'll never get to do anything cooler than this.' And this is happening right now, so I just want to say thank you and I love you!" Bursting onto the stage with the night's opening number, 'bury a friend', the pop sensation, who was in town for the latest leg of her Happier Than Ever world tour, instantly made it clear that her long-awaited reunion with her fans in Singapore was going to be one to remember.

Supported by her drummer Andrew Mashall and brother FINNEAS, Billie kept energy levels in the stadium high as she unleashed impassioned and uninhibited live renditions of hits such as 'NDA', 'Therefore I Am', 'my strange addiction', and 'you should see me in a crown'.

In response, all in attendance screamed, clapped, cheered, and sang at the top of their voices as their eyes remained transfixed on the young artist, whose stage presence was so magnetic that it demanded every bit of their attention. One of the most memorable songs of the night was 'Oxytocin'. Prior to performing the track from her second studio album, Billie invited the audience to be a part of the performance.

"I'm going to ask every single person in here to get really low down," she instructed.

She continued: "And then when I say, 'we're all going to jump around', will you jump with me on this song?"

The resulting scene was a riotous one with a sea of fans bouncing to the beat of the infectious number. Midway through the show, Billie turned down the energy for a stripped-down set. Joined by FINNEAS (who was on the guitar), she showcased her ethereal vocals while performing 'i love you' before picking up a guitar of her own to deliver a captivating live iteration of 'Your Power'.

During this segment, which also featured 'TV',  the unparalleled O'Connell partnership, which has produced so many memorable songs, was on display for all to see. Intending to conclude the show in the same manner that she had started it, the vocalist cranked up the energy with two back-to-back hits — 'bad guy' and 'Happier Than Ever'. While the former transformed the National Stadium into a giant dance arena, the latter brought everyone together for a memorable and cathartic mass karaoke performance.

More than just a concert, the Singapore stop of Billie's Happier Than Ever world tour was a microcosm of the hold that the wunderkind currently has on the entire world. Billie will continue the Asia leg of her Happier Than Ever world tour in Bangkok and Tokyo this August.

HAPPIER THAN EVER, THE WORLD TOUR SINGAPORE CONCERT SETLIST