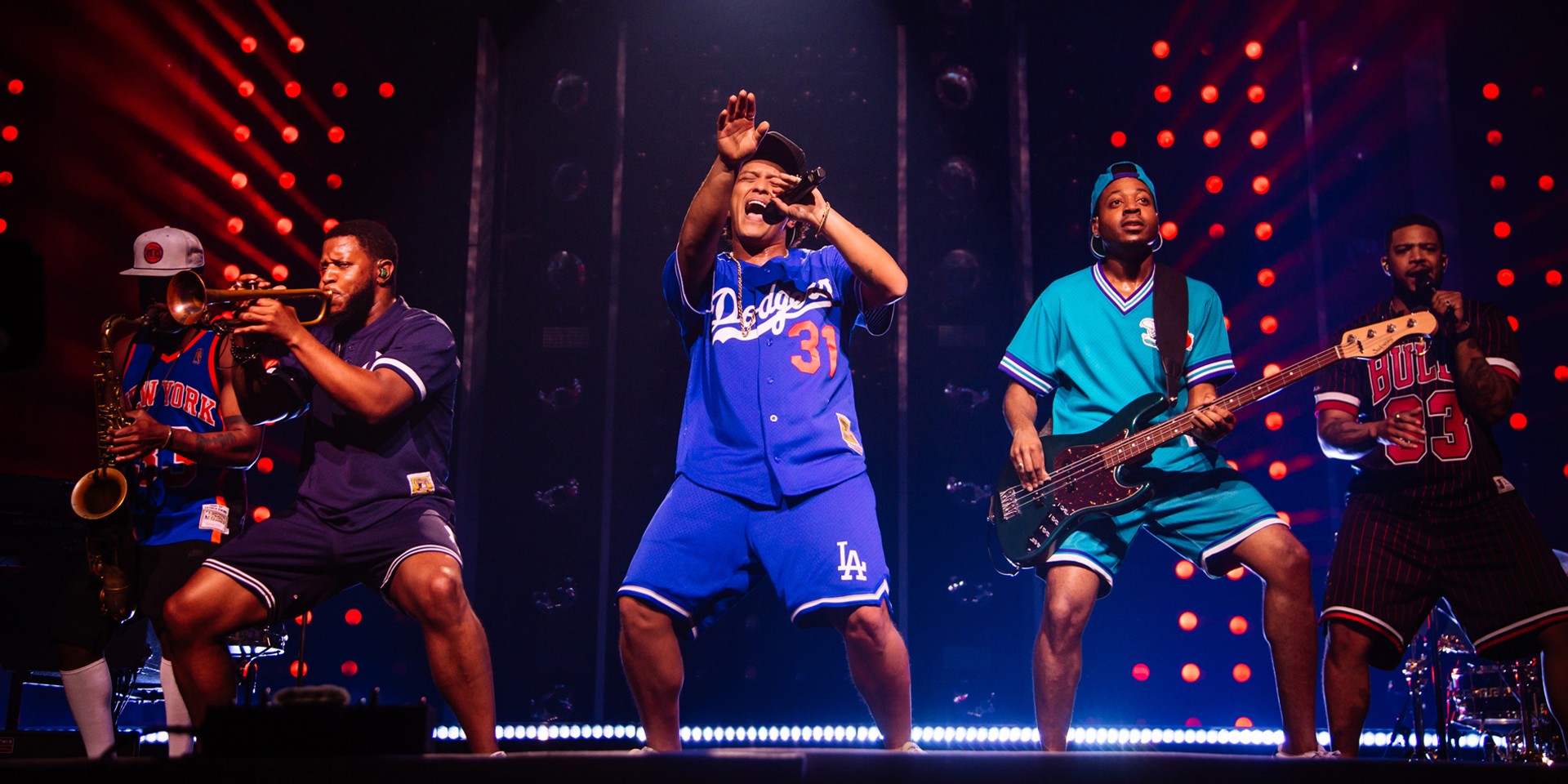 Last week was a truly hectic week when it came to banner pop acts performing in Singapore – from 5 Seconds of Summer to Harry Styles and Dua Lipa, the first week of May in 2018 was truly one to remember.

All the aforementioned acts, however, paled in comparison to Bruno Mars, who with his chart-conquering, shiny smooth New Jack Swing homage 24K Magic is probably the biggest male pop star in the world right now. Bruno sold out two nights at the Singapore Indoor Stadium well in advance, which is no mean feat. But perhaps even more impressive was how he had almost everyone in the house on their feet – have you ever tried to get thousands of Singaporeans to boogie together at the same time? 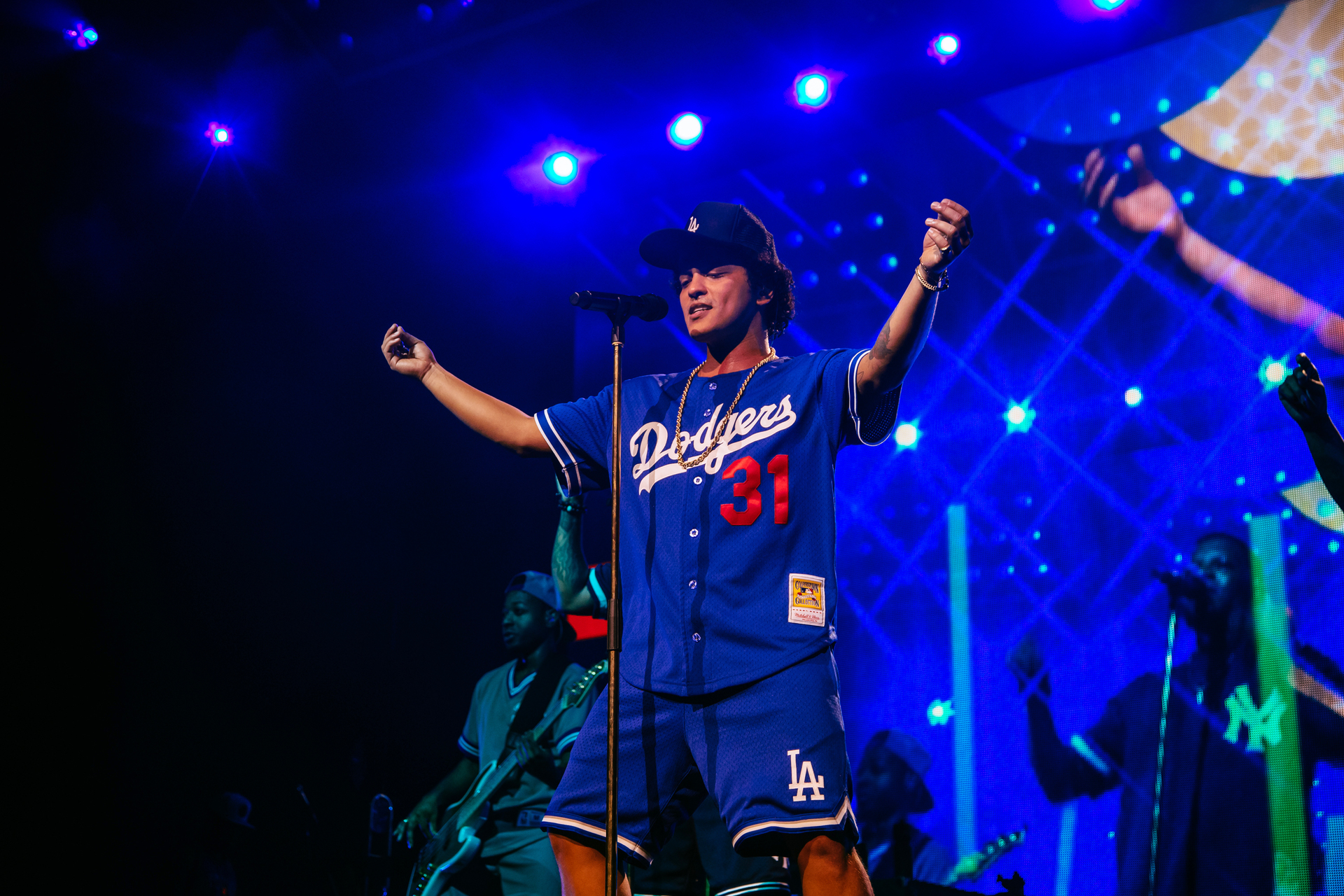 Bruno ran a tight ship. The curtain – emblazoned with a huge, ornate crown – dropped at 8.10pm exactly, and Bruno, clad in a LA Dodgers jersey, launched straight into 'Finesse' and then '24K Magic'. The crowd went crazy and hundreds of phones went up in unison to capture the eye-popping lighting, the thrilling pyrotechnics (cued perfectly to crescendos and climaxes) and of course, the slick dance moves and loose-yet-coordinated choreography of Bruno and his backing band.

When the camera trained on Bruno's face, shining with sweat and blown up to huge proportions on the screen behind him, it was a little startling to see that the buoyant performer looked a little haggard – though when one thought about his brutal tour schedule, the exhaustion certainly made sense. But Bruno hardly missed a note, putting considerable effort into his vocal runs and high notes, to the audience's delight. 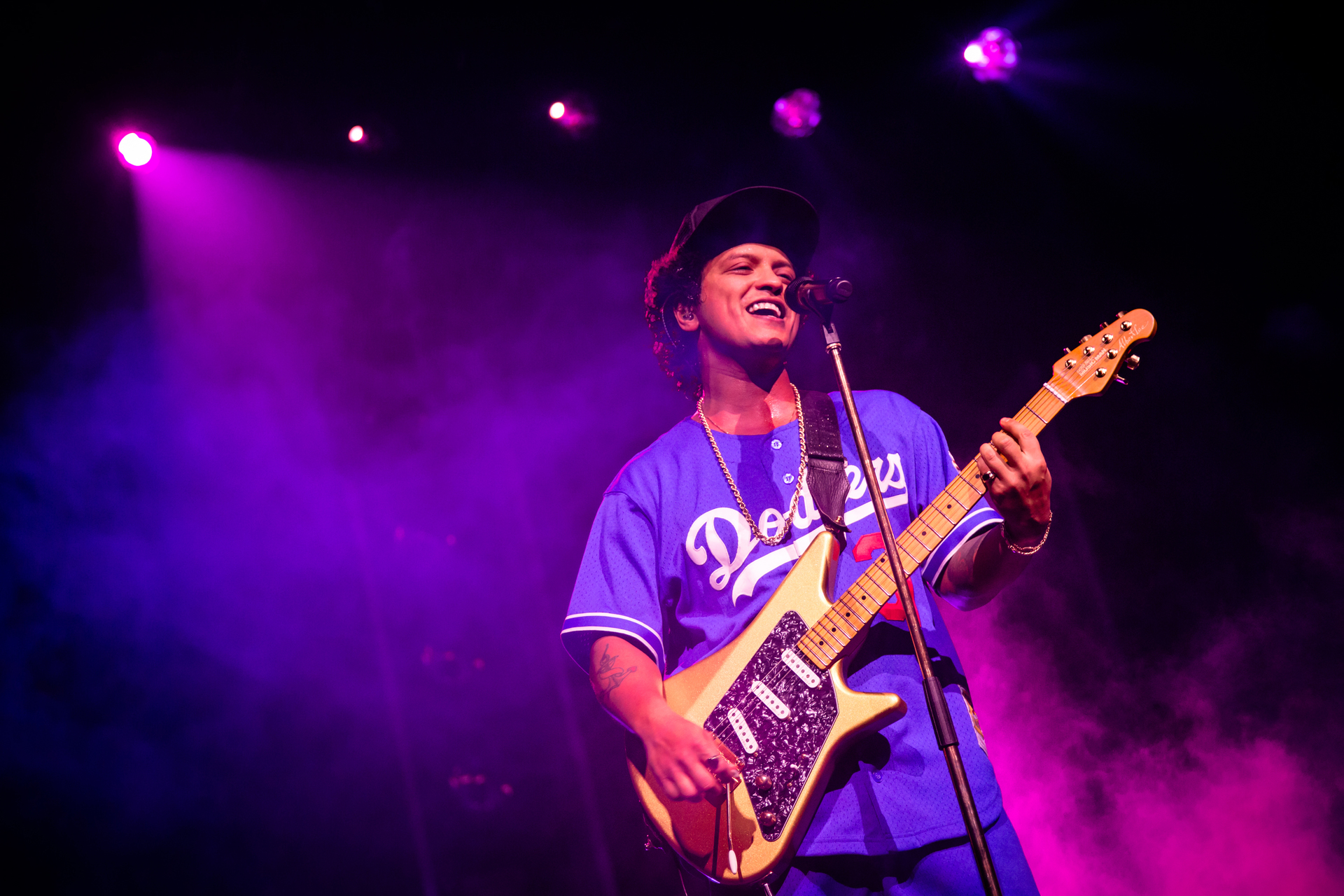 He wasted no time filling his 80-minute set (with no opening band) with music, bantering during the gaps, thanking Singapore for having him for not one but two nights and teasing folks on the sides for sitting down. Though the non-singles off 24K Magic got a little less love from the crowd, they were also the songs when Bruno had the most fun, grinding on the mic to the line "You need to activate your sex" from 'Perm', and pulling out a chunky, old-fashioned cellphone during 'Calling All My Lovelies' and pretending to have a conversation with the "contemplating, playa-hatin'" subject of the song.

The show shifted into another gear after 'Versace on the Floor', which concluded the first half of the set that had been devoted to 24K Magic ('Treasure' had been the only old cut in that segment). Next came hit after hit after hit from Unorthodox Jukebox and Doo-Wops and Hooligans, the albums that made Bruno an omnipresence on 2010s radio. Bruno belting 'When I Was Your Man' backed only by his keyboardist to a sea of bright, waving lights in the crowd, was an unquestionable highlight from the second half of the set. 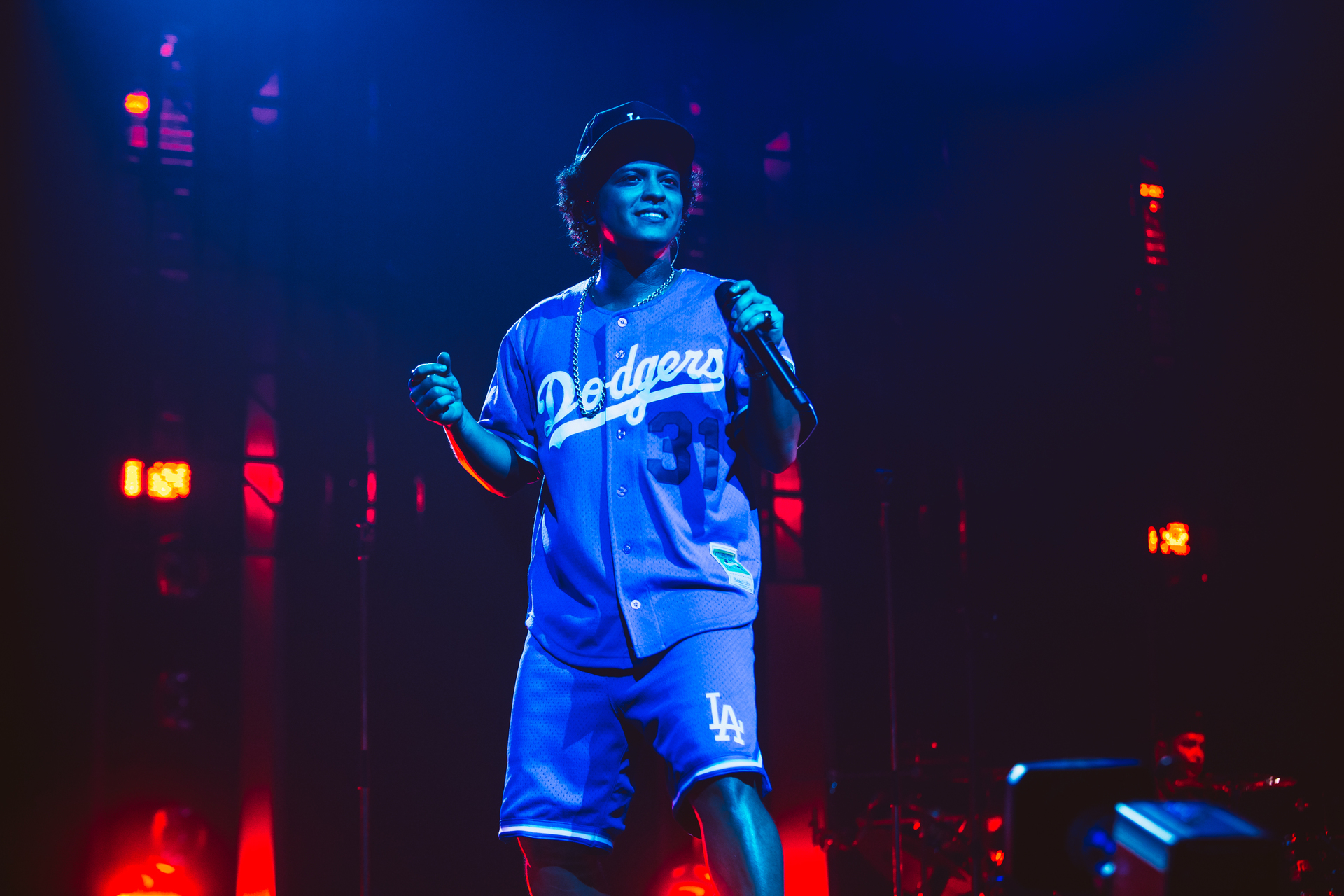 Bruno ended his triumphant night with the smash hit 'Just The Way You Are' with a thrilling extended outro, and then returned for an encore with 'Uptown Funk' – a song I had wondered if I would hear while waiting for the show to start, but also a song I had completely forgotten about by the time the show was underway. He had also saved the most extravagant stage production for this very last song: plumes of fire shot up towards the song's conclusion, perceptibly raising the temperature in the venue, while men dressed as firefighters came out on stage to fill the stage with vapour from fire extinguishers as the curtain fell, bringing an end to a night of top-notch pop performance from Bruno Mars. 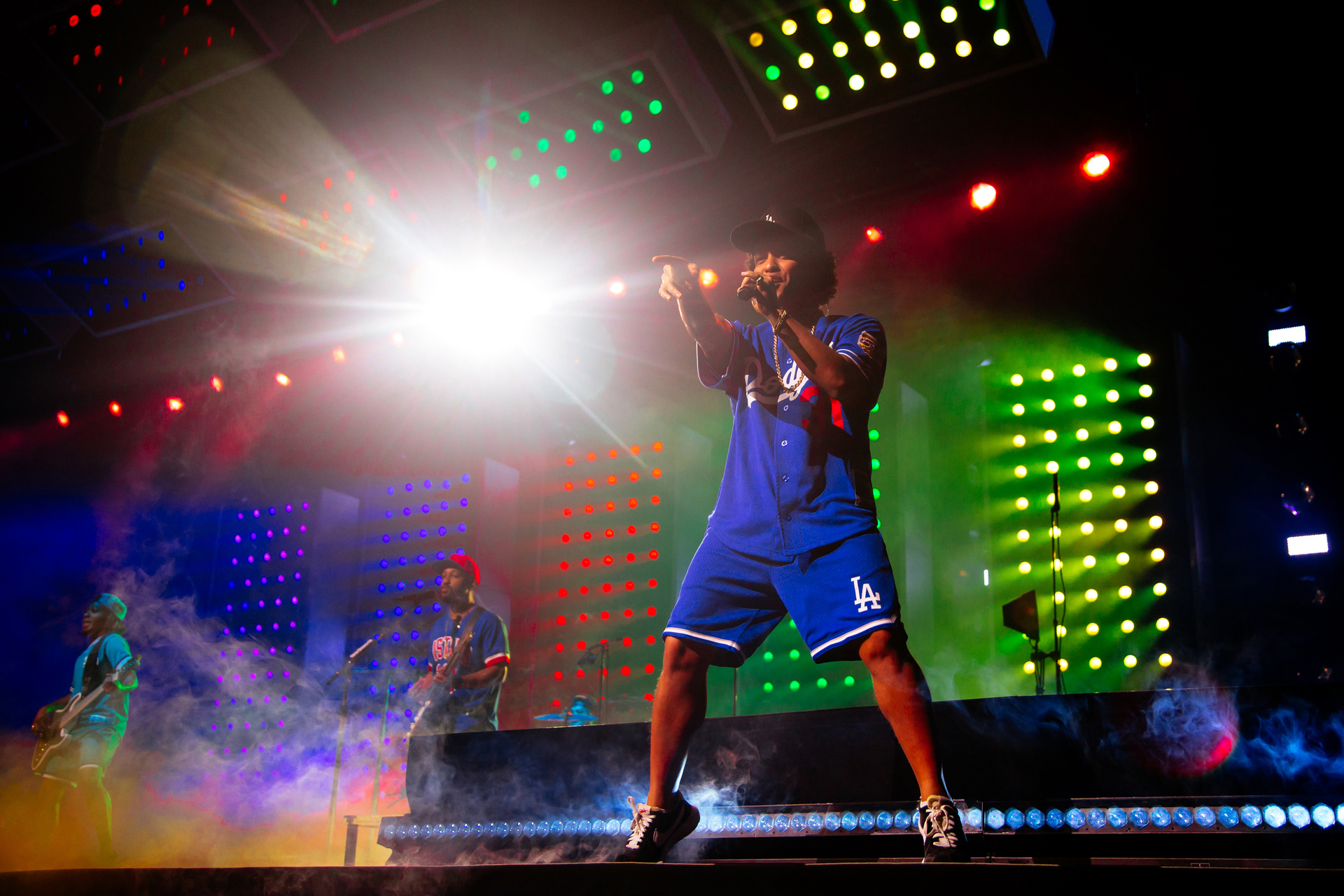