There's a sort of magic that sticks with you when you learn how to play an instrument, and back before the internet, this magic was delivered to Filipino musicians through Jingle Chordbook Magazine. Sadly, its founder and editor-in-chief Gilbert Guillermo has passed away on July 21 (Tuesday). He was 74.

The iconic music magazine, which was founded in the early 1970s, ran for around three decades and blessed many Filipinos across the country with how-tos on playing their favorite songs on the guitar. Besides being a song and chord guide, Jingle Chordbook Magazine was also packed with jokes, poetry, album reviews, and subtle commentaries on the government during martial law, and has since been immortalized in the lyrics of Sandwich's song 'Betamax' with the words "sa Jingle Magazine natuto mag gitara."

Bandwagon caught up with a few local musicians who grew up reading Jingle Magazine.

Every month I asked my mom to buy Jingle in San Pablo or Lucena city, two towns away [because] it wasn't available in Candelaria. It literally taught me to play guitar.

I also enjoyed the stories about the artists, the record reviews, and even the weird jokes and cartoons. It led me to discover the underground local music scene when I went away for college in Manila.

'Betamax' is my tribute to all the artists I grew up listening to. I learned to play their songs and read about all about them in Jingle Magazine.

Francis Brew Reyes of The Dawn

When I meet a local musician my age (or a little older or a little younger, and let's not focus on the actual years haha), chances are huge that, like me, they read and learned from Jingle Music Magazine.

Every single issue had a guitar chord chart pullout page so whether you already knew how to play or starting from zero, every issue was precious on that alone. So if you wanted to learn a song and didn't know a particular chord, you could rip out the chord guide and place it conveniently beside the song you were learning.

Funnily enough though, I actually was more interested in the articles, music news, record reviews, essays, and of course, the Grin Page where readers can send their jokes (mostly green ones which were of course irresistible for the hormonal 14-year-old that I was). I learned guitar chords and songs of course, but it was the articles and reviews that I responded to the most.

There have been other chordbook/music magazines that competed with Jingle or were born after its demise... and the writing tended to be so-so because the critical angle was missing, there was no genuine wit, or the grammar was simply atrocious. I learned and grew up on Jingle. I learned how to play guitar, how to write, how to be critical, and occasionally, how to lighten up.

Chino Singson of the Itchyworms

When I began playing the guitar, the Jingle Beatles Songbook (in its nth printing) was my bible. I spent the entire summer of 1991 with it. I loved the songs of the Beatles, and Jingle was the only publication with the chords and lyrics (and more) of their whole catalog. In the pre-internet age of music, Jingle Magazine was THE resource for the most accurate chords and lyrics of pop and rock music, both local and international.

Anybody who was into music in the '70s and '80s, specially rock I think, would know Jingle Magazine. I learned to play guitar with it, looked forward to the articles and most importantly the reviews, and the fights in the letters section.

In the late '80s, a couple of my friends decided to volunteer to intern at the magazine. The offices and press was on P.Tuazon and I ended up hanging out with them for a spell. James Saspa was the editor at the time. And one of my favorite memories was meeting Richard Tan with his stash of cassettes from his fledgling label.

A documentary on Jingle Chordbook Magazine by director Chuck Escasa called Jingle Lang Ang Pahina is available for free streaming on Vimeo in honor of Guillermo. 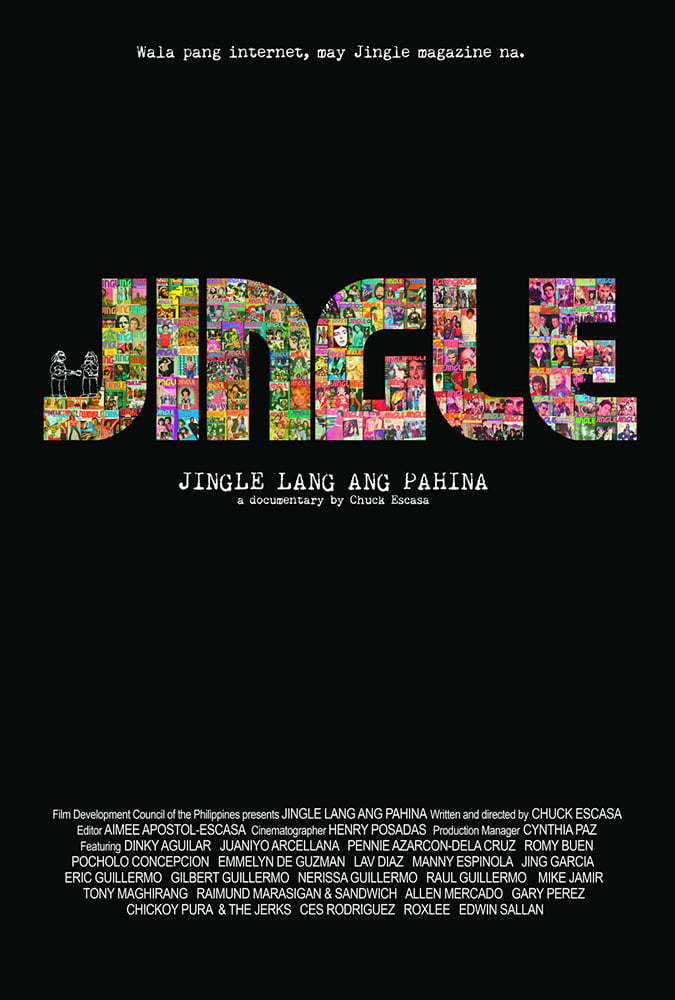 Stream the documentary here until July 23 (Thursday) with the password kwentongcubao.