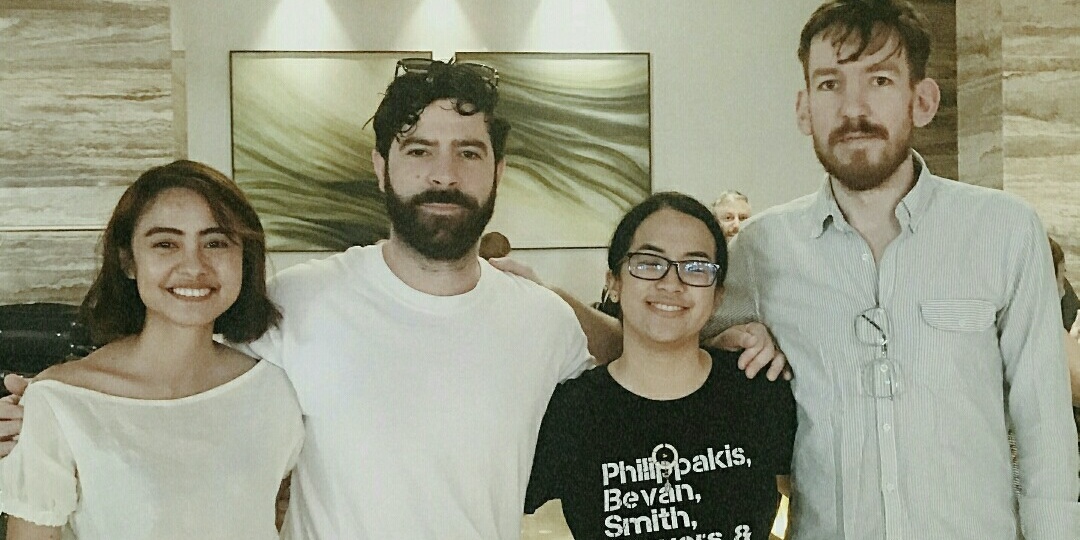 Nathalie Rubic, a music fan from Cebu, has met her favorite band Foals thrice. Her encounters with them were larger than the common scenario where fan says "Hey!", fan gets a selfie, band walks away. Yes, Rubic had a whole lot more than that and it was all thanks to fate.

Bandwagon caught up with the avid Foals fan to talk about her love for the 'Spanish Sahara' act and how she got to meet them in the most unlikely places.

How long have you been a Foals fan? How did you discover their music?

I was a huge fan of Skins, this British coming-of-age drama that aired between 2007-2013 and starred then young, up-and-comers Nicholas Hoult and Kaya Scodelario.

That show introduced me to a lot of quality tunes! And Foals were featured playing 'Hummer' in one of their promo materials, this short web video of the characters attending a “secret party.” I checked their music out and enjoyed them ever since but I didn't really fall in love until Spanish Sahara came out. That song is magic.

Out of all the bands that you like and listen to, what sets Foals apart?

Foals are incredible in building this sort of sonic atmosphere. They have this tremendous energy which is even truer in their live shows where it starts in a slow, steady pulse and eventually builds up to an exhilarating crescendo. It's so cathartic. It's just damn good music you can lose yourself into!

Tell us how you met Foals for the first time? How did you end up on the NME?

I first met them back in 2014 when I traveled to Singapore and Kuala Lumpur to catch them on their Holy Fire tour. The moment I entered Resorts World Sentosa, I saw Walter, Jack, and Edwin just standing by the giant Universal Studios globe contemplating whether to enter the theme park or not!

I was stunned for a good five minutes, composed myself (to this day, I honestly don't know how I managed to), walked up to them, and started chatting! They couldn't be any nicer to me. But I also didn’t want to waste the opportunity so I took out the gifts I brought for them - mostly Filipino delicacies, a few souvenirs, and a bottle of lambanog (palm liquor) - and did my best to entice them to do a show in Manila someday (hey ho)!

I informed them of their Filipino fanbase and how a number of people campaigned for them to come to the Philippines. I remember Edwin saying, "Yes, I'm aware! We've heard of that!" 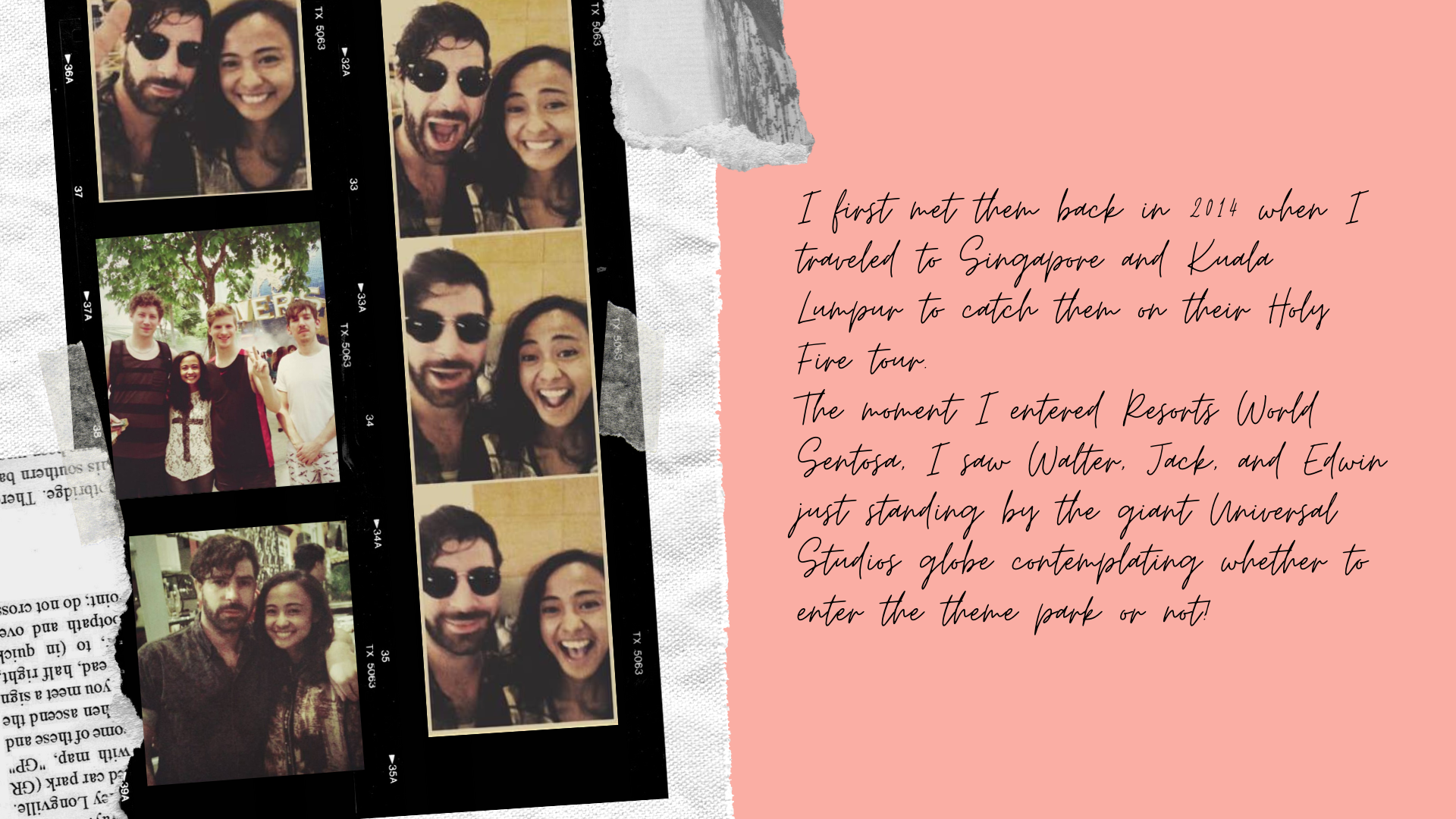 The second time was very soon after the first, which was straight after their gig in Kuala Lumpur. They were nice enough to invite me to hang out in a local bar after the show.

I was a bit intimidated when I first saw Yannis! But he was such a sweetheart. After a few drinks, I mustered the courage to approach him and we started chatting! I remember we talked about their music and what tour life was like. He also gave me an insight about the business side of things and what his writing process was like. We took a photo together before they had to head back to their hotel and that's how I ended up getting featured on the NME!

And the third time?

I couldn't believe it when it was announced that they were headlining Wanderland 2020. We've been campaigning for them to play in the indie music festival for so many years! And I'll be honest and confess that I did lose hope in seeing them here in the Philippines. So you can only imagine my initial shock when they were hinted at in the teasers! 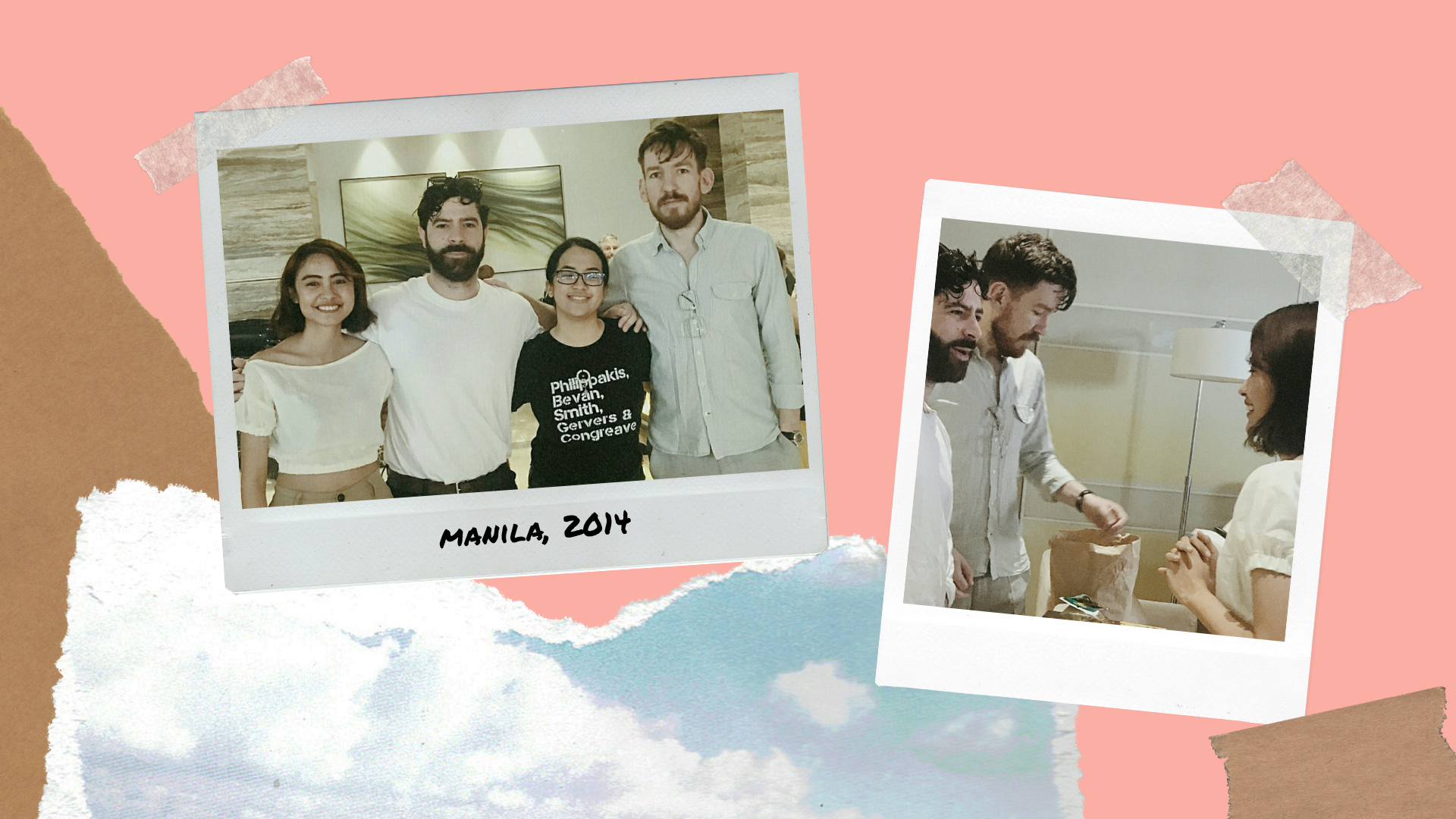 Unfortunately, the festival was canceled just a few days before it was set to happen. COVID-19 has caught up to us. But since I was already in Manila, I still wanted to at least try and see them before they leave the country. I reached out to them with the help of my fellow fans and friends in @FoalsPH on Twitter. They remembered me from Singapore and Kuala Lumpur and agreed to meet!

Surreal! There's just no other word for it. I mean you're sitting in a pub in a foreign country and having a meaningful conversation with your favorite musician about music and literature, whilst he also gives you advice about your life and your dreams and aspirations—literally just drinking cold beer and talking about Emily Dickinson and journal writing until 4 in the morning?  It still feels like a wonderful dream.

What's the best thing about being a Foals fan?

They are unbelievable live! I've been to quite a few concerts over the years and they are just up there in terms of bringing a phenomenal experience on stage.

Foals are also different from a lot of other musicians because they are not in it for the fame and glamour. Obviously, it's a business but they're also just really passionate about music and are constantly trying to evolve their sound. They are so talented, hardworking, and down to earth. But criminally underrated! It still feels like they're on the verge of the peak of their career. And I feel really blessed as a fan because I know I still have a lot of things to look forward to from them.

Check out the first episode of Foals' FBC Transmissions: