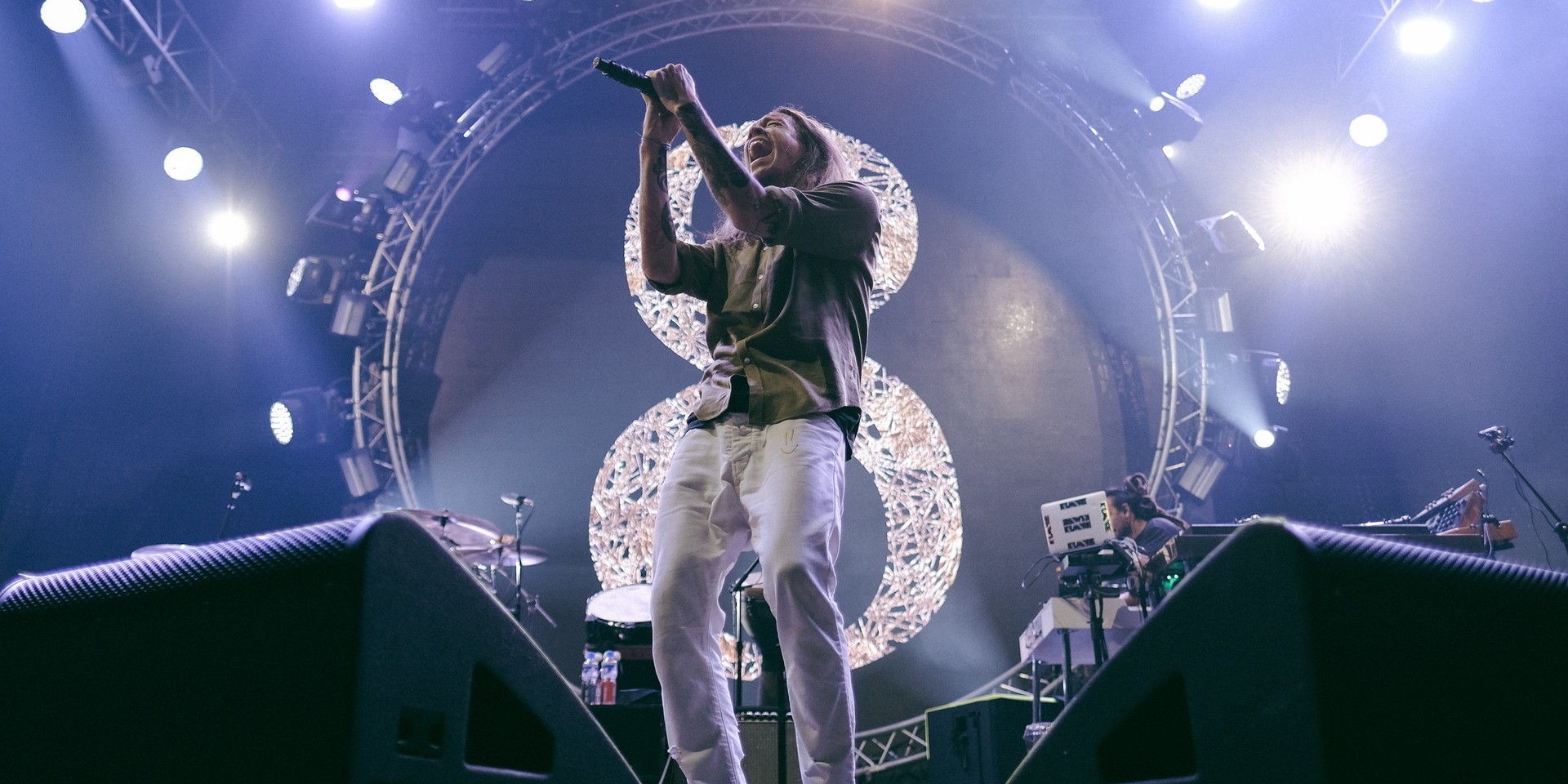 S.C.I.E.N.C.E. was produced 20 years ago and you can hear bits and pieces of it sprinkled all over 8. Ever since 8 was released, Incubus has been flipping more exciting conversations among fans than breakfast diner chefs do for pancakes. It’s always an odd analogy that stirs up a storm for rock music. When Fall Out Boy started to incorporate EDM to their tracks, that’s when some of us had to consider that maybe we need to open ourselves to the obscure realities every now and then.

It’s definitely a rock show when you find kids donning their band shirts like flags during formal ceremonies in various countries. Call it a cult classic or fall back into a relapse of it, we all know that we’re growing up to people who consider black shirts as closet basics (even more than collared tops) just so we could reserve one piece for our annual gatherings in the pit. 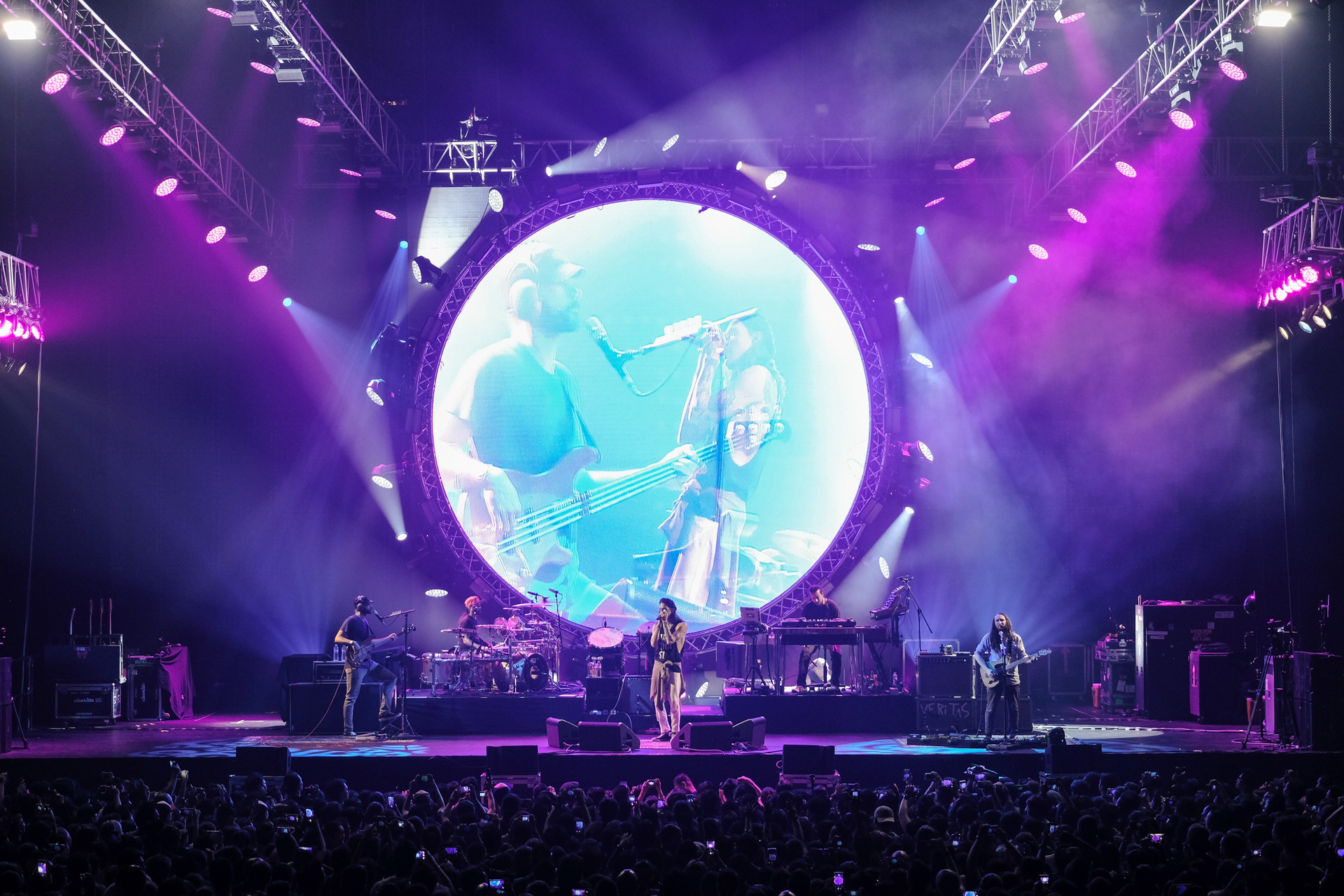 Apart from an opening act that set the floor of Araneta Coliseum on figurative fire, Incubus didn’t shy away from making a grand entrance. They started their set with 'Love In A Time Of Surveillance', which is probably what our good ol’ pals would send to their respective FBI agent SOs. We’re kidding, but part of us wants to believe that and the rhythm of this song counts as an accelerating heartbeat on caffeine. The graphics rolling in the background were superb and well-aligned to every song that followed.

The crowd mellowed down at an early rate when Brandon belted out the lyrics to 'Warning'. It flowed enough to set a mood where everyone can sit down and crack a cold one for each other. From old to new fans, the audience was bustling with families, friends, colleagues, and lone wolves looking for a great time. During breaks, a group of men on the left side of the stage would holler and sing either “Happy birthday, Brandon!” or “Thank you!” Brandon felt touched by the affectionate messages and actions the crowd made for the band whenever they were tuning or taking brief breaks between songs. He would show his appreciation by mumbling through the mic, “He he thank you.” 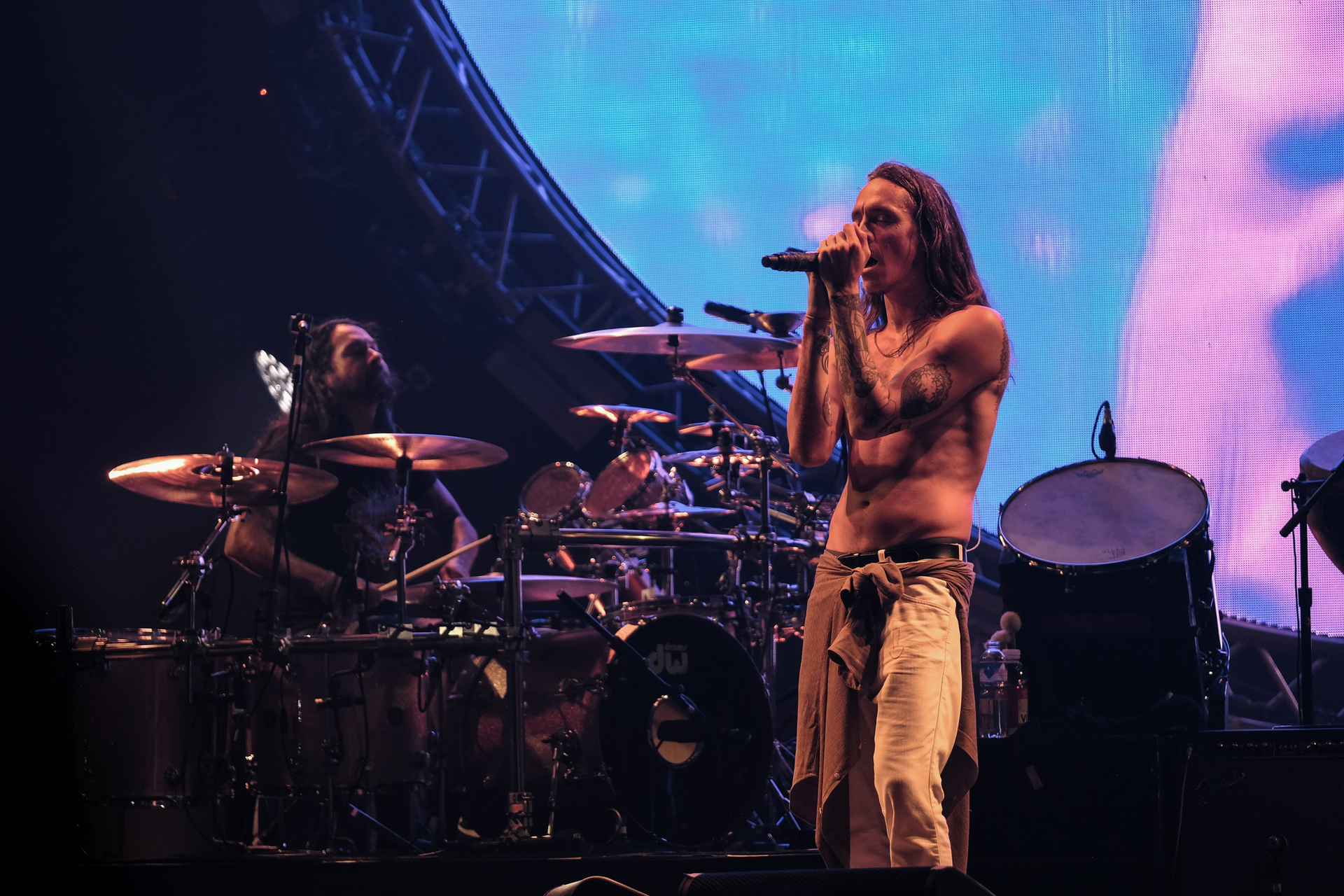 Everybody was ready to scream their lungs and diaphragms out to their favorite songs. To name a few, 'Megalomaniac' and 'Anna Molly'. You could tell that it was bound to be a party for everyone whenever Mike would nail every note on the guitar. Whispers among fans can testify that he was indeed a highlight on his own whenever Incubus performed in Manila.

In a bunch of five fans, two would be crying while the other three are sweating and struggling to breathe in the pit while gasping for every line in each song. Incubus performed 'Wish You Were Here' just in the nick of the time when people were scrambling through their fulfilled expectations in the concert. The line “Maybe I should hold with care but my hands are busy in the air.” Represented a part of the crowd that wanted to reach out their hand to Brandon just so they could grasp the air he exhaled. This was followed by a snippet of Pink Floyd’s 'Wish You Were Here'.

Back to the killer graphics cascading in the background, 'State Of The Art' had some of the most spectacular ones. It was a kaleidoscopic view of flowers blooming from the center and sides of the circular frame of the screen. Complementing the sophisticated parts of the track, it was beyond our imagination to conjure theatrics as simple as what we witnessed during this song.

Among the other songs that had guests shaking from their seats, 'Circles' and 'Pantomime' made an enormous reach by cracking more than one egg and throwing Mike and Jose to creating a tandem we’d love to see more often. With the heavy guitars and fire-inducing riffs, we can’t sit back and relax to enjoy this show. We had to bang our heads to make the moment count.

Another cover that made it into our “Sundays With Our Inner Dad” playlist is Incubus’ take on INXS’ I Need You Tonight. We thought the night would be nothing less than people slamming their bodies. While our boys were playing this track, we found people swaying and bopping their heads to a groovy beat. 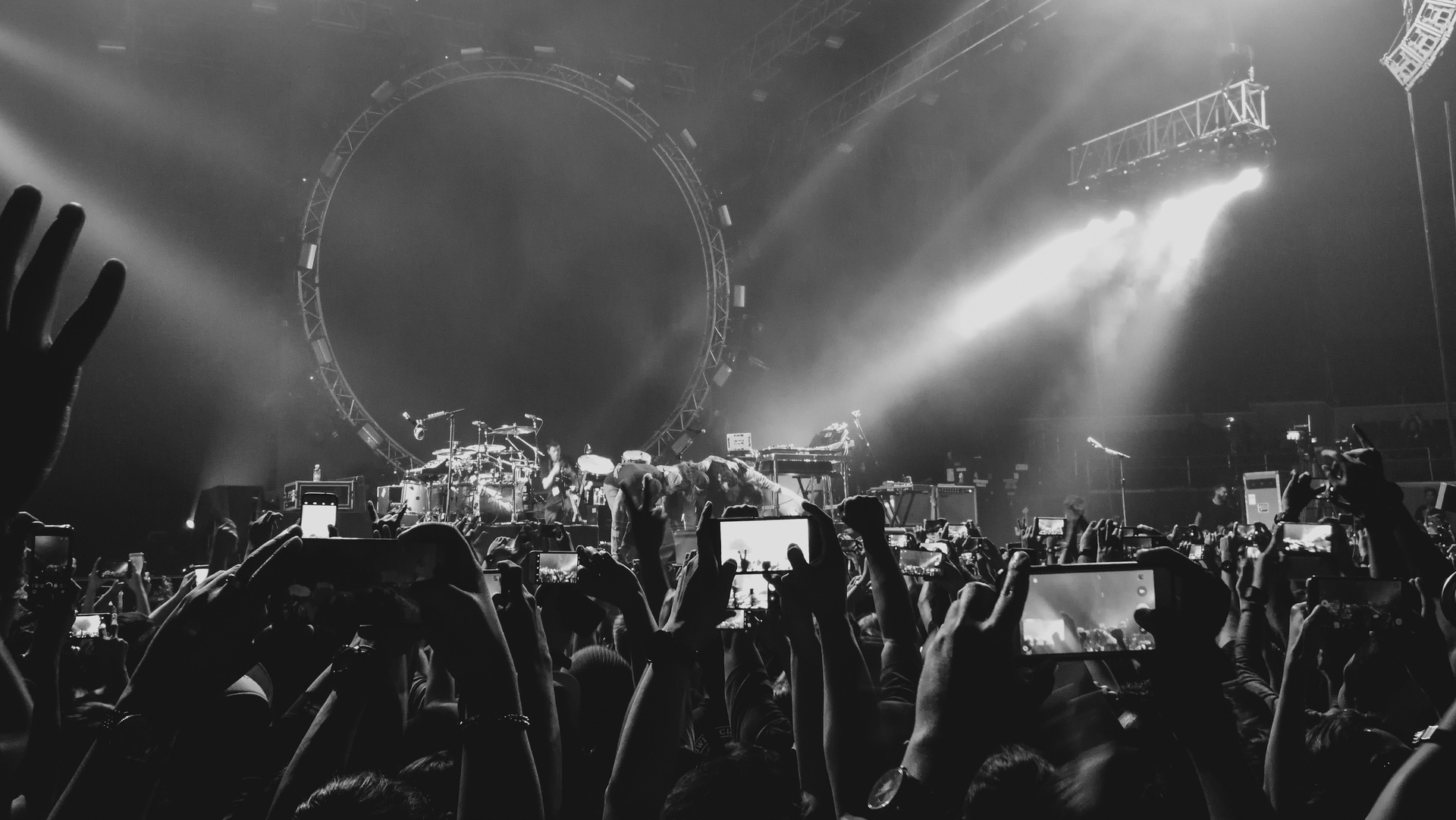 As the evening went on a familiar path towards greater damage and mayhem, 'No Fun' reeled everyone to a frenzy of teen angst and bitterness towards reality. “Hey! You’re no fun. You’re a song I never want to hear again!” sounded like an anthem for tortured spirits reclaiming their place in this world. It’s the best way to break up with someone and we could tell that there will be no regrets waiting in a box outside your doorstep after. The salty aftertaste lasted long enough to settle in a heavier sound coming from 'Nice To Know You'.

While we felt awestruck with nostalgia, their rendition of 'Drive' caught everyone off guard. It began with a mellow opening until Brandon made a brief pause before the opening verse. The crowd started to sing the chorus loudly enough to shake the entire coliseum walls. “Whatever tomorrow brings, I’ll be there” was a single line that bonded thousands and millions of fans closer to Incubus. 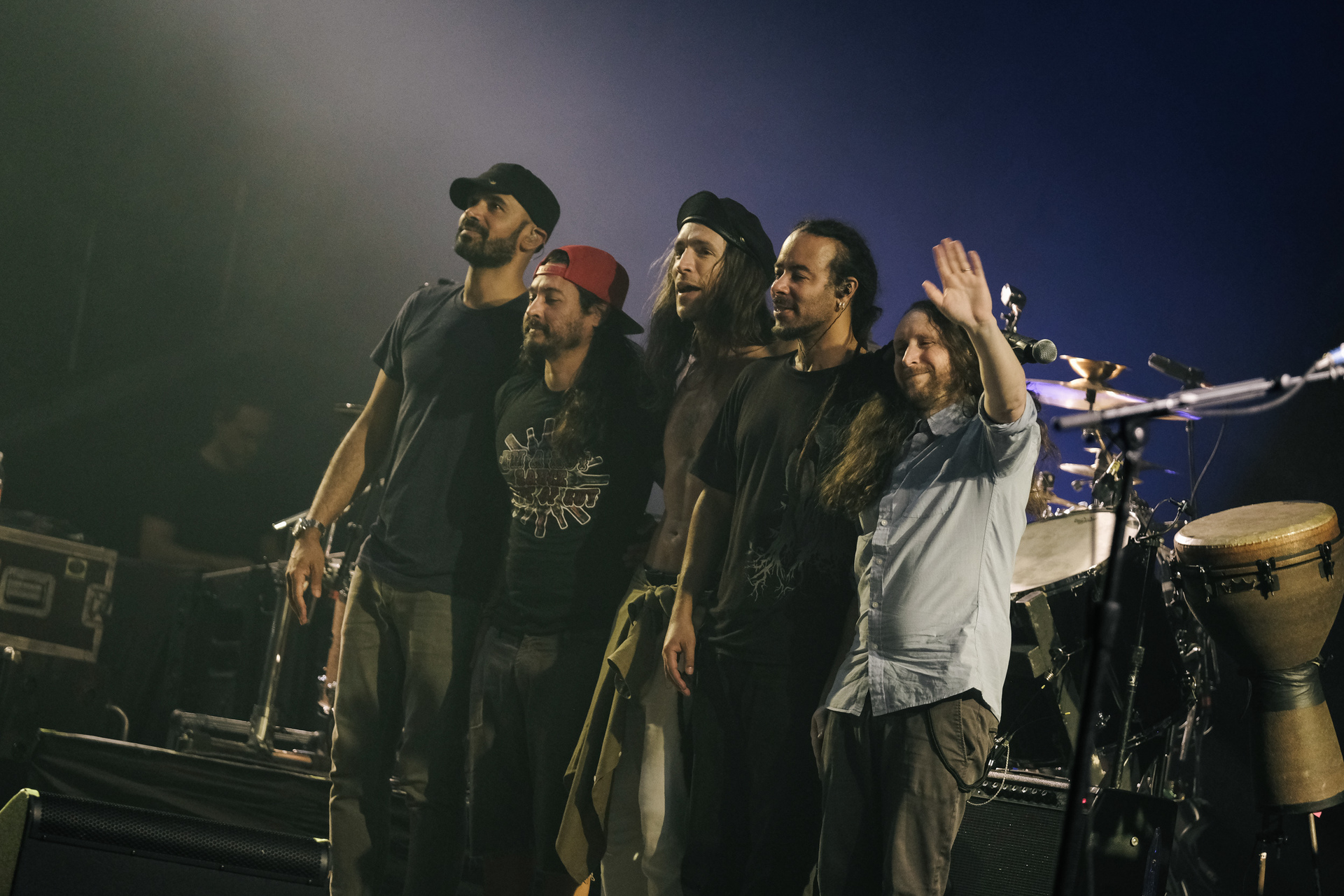 For the encore, they played 'Quicksand' and 'A Kiss To Send Us Off' as a “goodbye” and “see you later” to everyone. This show delivered a great “morning view” and a couple of “light grenades” enough to lull the crowd to a sweet slumber.