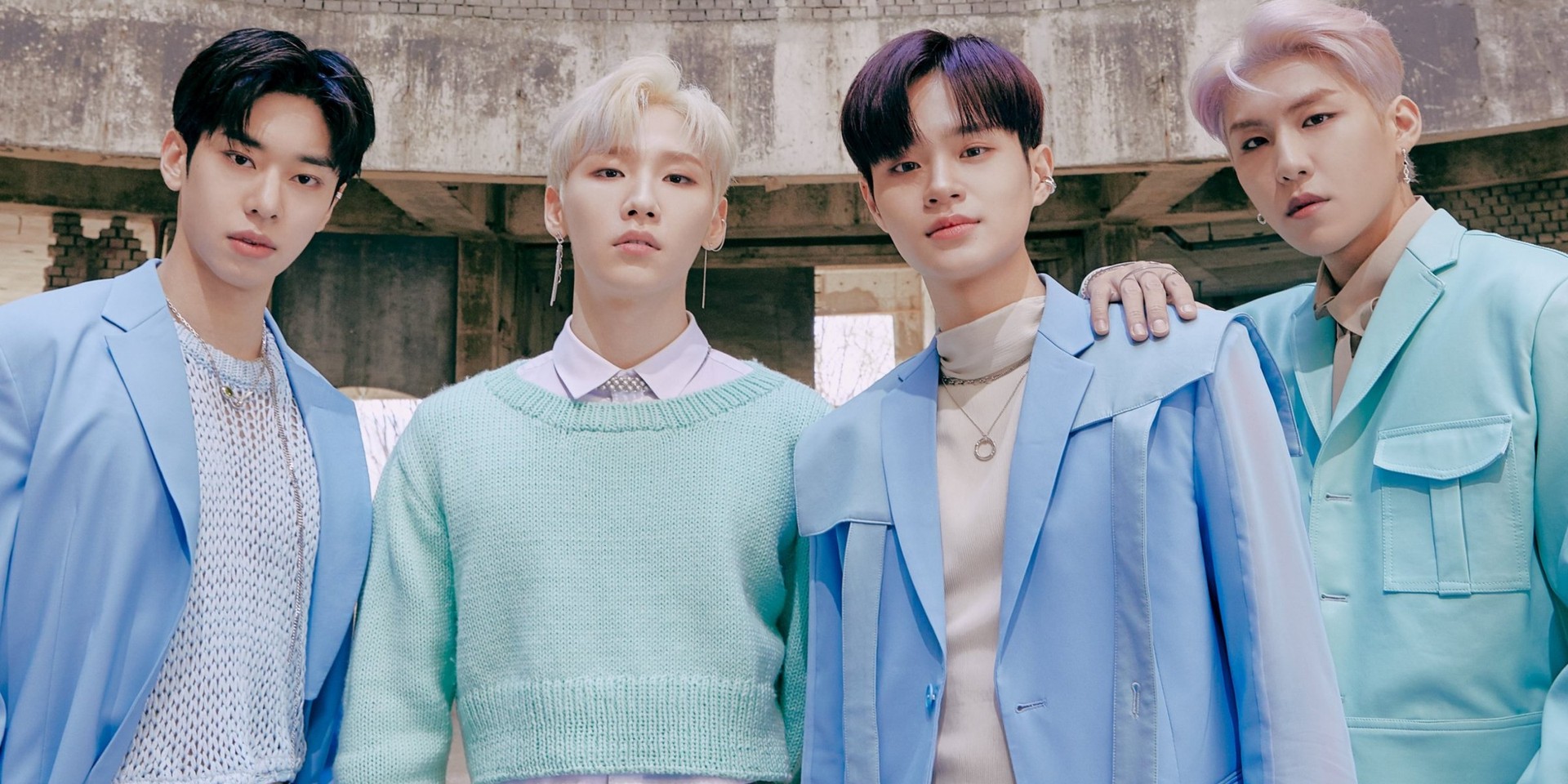 Versatile, creative, and driven, AB6IX are one of K-pop's rising stars. Armed with a unique sense of musicality and a diverse rolodex of tracks, the four-piece group are on their way to achieving greatness.

Comprising Woong, Donghyun, Woojin, and Daehwi, AB6IX are a group formed under BrandNew Music in 2019. Individually, they boast a dynamic mix of talents and an admirable knack for performing; but together, they're an all-around group that tackle a range of soundscapes and styles determined to show the world what AB6IX is all about.

"We want to show a variety of music as much as possible and tell our individual stories through our group. We also want to make sure that we put our fans first," AB6IX tells Bandwagon.

While the group have only been around for two years, they've managed to release two albums and four EPs, as well as collaborate with international acts like Lizzo and Why Don't We.

Most recently, the 'BREATHE' hitmakers dropped MO' COMPLETE: HAVE A DREAM, a sequel to their first-ever record. The new EP tells the tales of Woong, Donghyun, Woojin, and Daehwi after two years as AB6IX. Produced and written by the members themselves, the record boasts a mixture of genres – from bass-filled rap to upbeat pop.

"B: COMPLETE is our debut EP so now we want to show what it's like to be more complete, and that’s what it means — B: COMPLETE into MO' COMPLETE. It describes our passion and ambition," says Daewhi and Woong.

Following the release of their latest EP, Bandwagon caught up with the multi-faceted K-pop group to talk about their musical process, their dreams for AB6IX, and how they put together MO: COMPLETE.

Hi AB6IX! How did each of you get into music and how did your K-pop journey start?

Daehwi: I started off with the church choir. That's how I got into the music and then that led me to audition and [eventually] brought me here.

Woojin: I joined the dance competition before this where I heard the crowd screaming for me. That kind of led me to get into music and then wanting to pursue this career.

Woong: My parents actually recommended me for dancing. And then thanks to them, it led me to where I'm at today.

Donghyun: I was doing band when I was in high school. And then that's when I realised that performing in front of people gave me happiness. That's how I got into music. 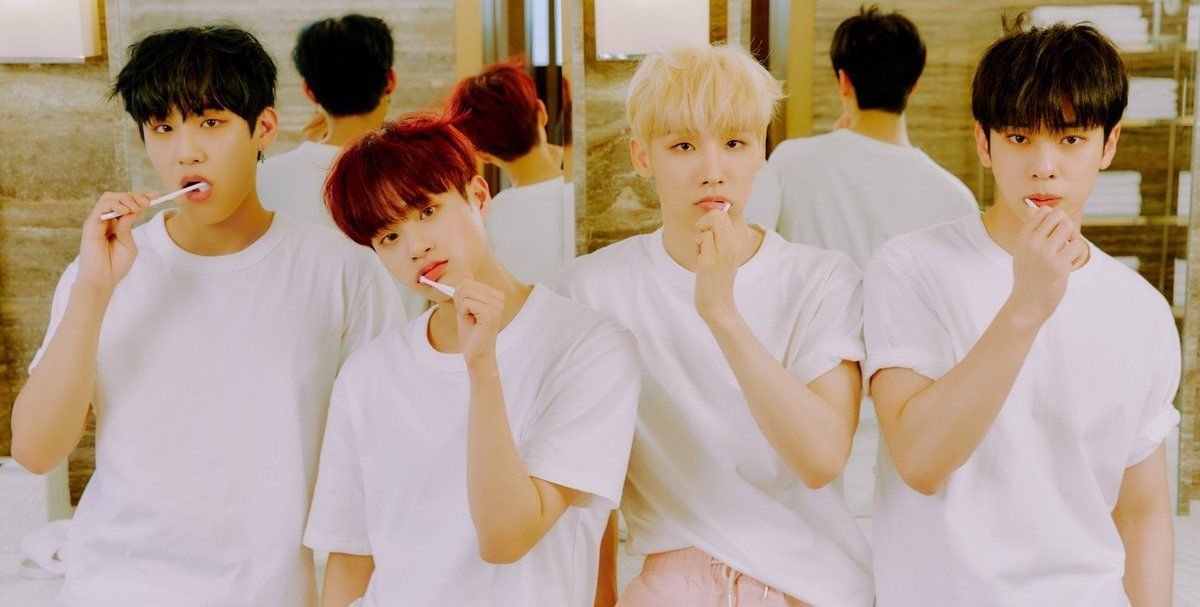 Who are some of your biggest musical inspirations?

Daehwi: J.Y. Park inspires me a lot. I love his music and I love how he frequently exercises and does vocal lessons and stuff.

Woong: Justin Bieber. Looking at his performances on stage, he really inspired me and then made me want to do similar things. He's been putting out really great music lately so that inspires me to do something similar to him.

You’re a group that self-produces its music. Can you take us through the process of making a song? What are the dynamics between the four of you like?

Woong: It's nothing extravagant or anything but whenever we get inspiration, we write it down on the spot. It's different for every member so it's kind of like putting the puzzle pieces together with different ideas that we have and then trying to bring a wide variety of sounds and ideas together.

What have you discovered about yourselves (musically and personally) while making music together?

Woong: Oh for me, it opened my eyes to the songwriting. Before I debuted, I actually never thought about how to write the song or anything like that. Getting to look at my different members' writing and then getting into the songwriting process myself, I've become really inspired. I thought it was a really cool process so it definitely opened my eyes up to it.

Woojin: I feel like I'm finding the music that I want to do as my career goes on. As I'm writing lyrics and producing songs, it helps me find what kind of music I want to be pursuing and doing.

How is MO' COMPLETE: HAVE A DREAM different from your previous releases?

Woojin: This EP is not too far away from our debut EP. We were trying to show something similar while at the same time add different elements to it, so it distinguishes it from our previous work.

You’ve also featured on remixes of Lizzo's 'Truth Hurts', and Why Don’t We’s 'Fallin’ (Adrenaline)'. What was it like working with these artists? Are there any other artists that you’d love to work with?

Donghyun: It was an absolute honour to have worked with such worldwide superstars. It was completely, truly an honour to do the features for them. In the future, if there is an opportunity we'd love to do something with Ed Sheeran.

What’s the biggest highlight of your journey together so far? What’s the best part of being in AB6IX?

Donghyun: There are so many memories that we can think of but to pick one highlight, it would be our first solo concert. It was putting our name out there as AB6IX... an AB6IX concert. Reminiscing on the concert that we had, it's just full of happy memories.

Where do you see AB6IX in the next few years?

Woong: Nothing too extravagant, but it's just to have our songs played more in more places and to have more people know us. And then for the public reception, whenever we put out new stuff or come back, [we want them to] be like, 'oh, wow, this is AB6IX comeback'. We want the fans to keep being excited, that's how we wish to be in the next few years.

Listen to AB6IX's MO' COMPLETE: HAVE A DREAM here.