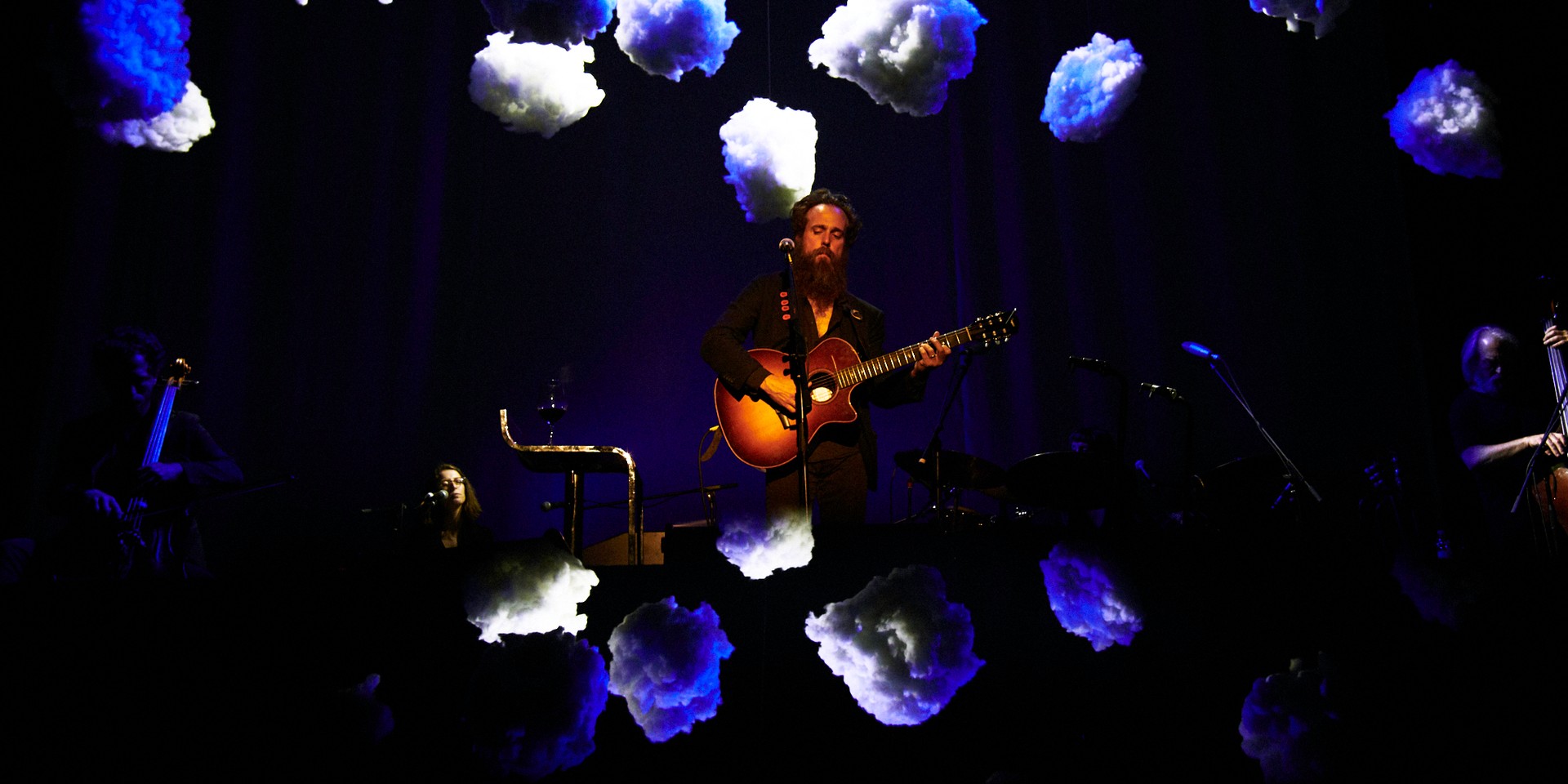 You’d expect a mellow time from a neo-folk crooner like Iron & Wine but Monday's show was far from it. Sam Beam packed the Capitol Theatre with his trademark dreamy serenades, a unique band, and a few floating clouds.

It was a show that neither overwhelmed nor underwhelmed, but rather, wrapped you up in a dose of warm sentimental vibes. 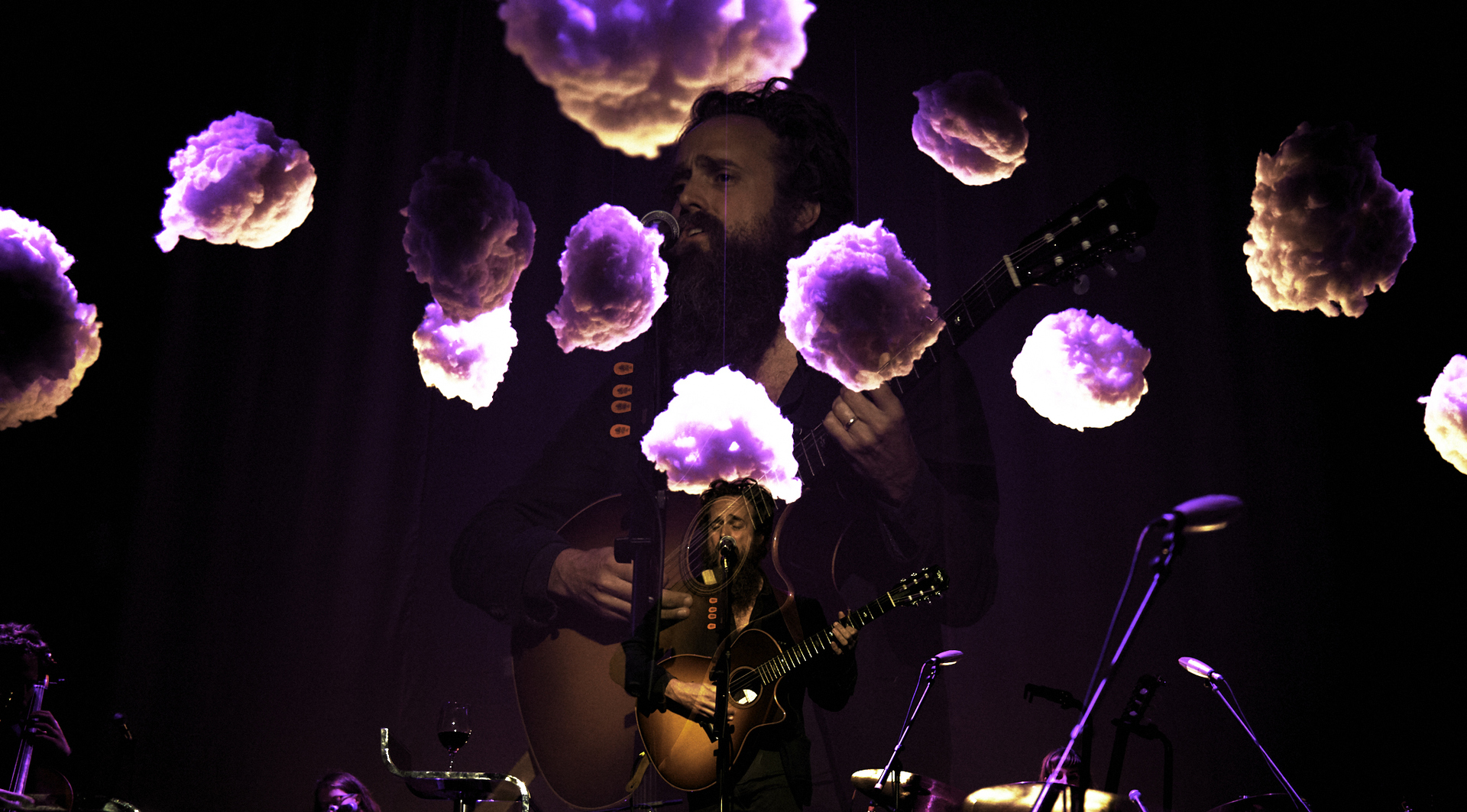 Despite their jet lag, the folks on stage were set on showing their audience a good time. Beam was clear about his intent, sipping from his namesake glass of red wine and bantering with good-natured hecklers from the audience:

“Are you gonna drink that wine?!”

“Why? Do you want it?” Beam joshed right back. 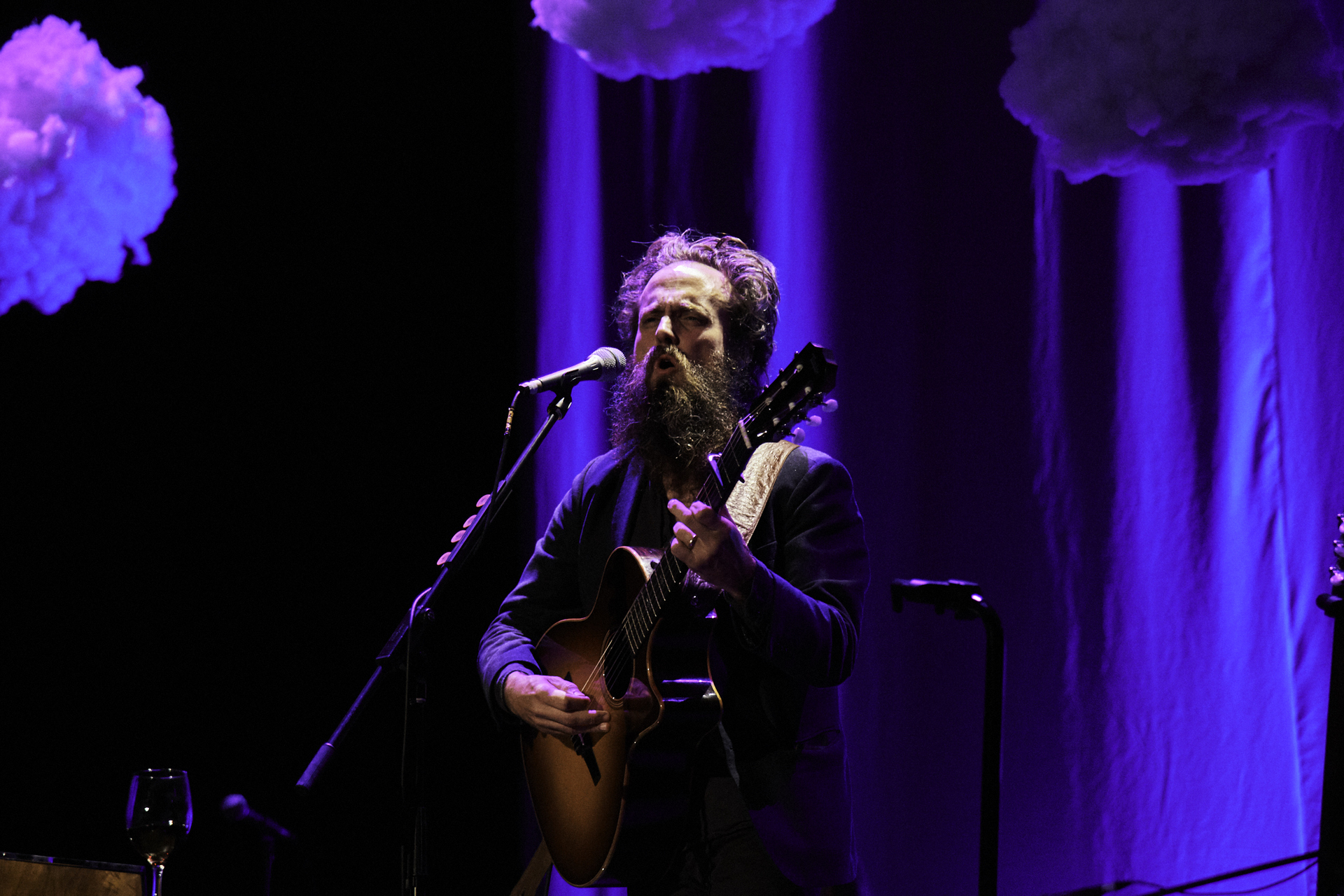 Despite the comfortable relationship established between audience and performer, a hushed reverence fell upon the crowd every time Beam, grasping his guitar and exuding laconic charm, began to sing. The bearded bard opened with 'The Trapeze Swinger', a song from his old live album Norfolk 6/20/05 and proceeded with songs ranging from all over his discography like the classic 'Jezebel' and newer numbers like 'Jesus the Mexican Boy'.

The band proved a fantastic addition and certainly brought the energy of the concert up. The piano melodies, vocal harmonies, bass lines and cello incorporated an exciting layer to Beam’s songs. Not that he necessarily needed it – the neo-folk singer still commanded all the attention with his mischievous ‘tude and yearning, lilting melodies. 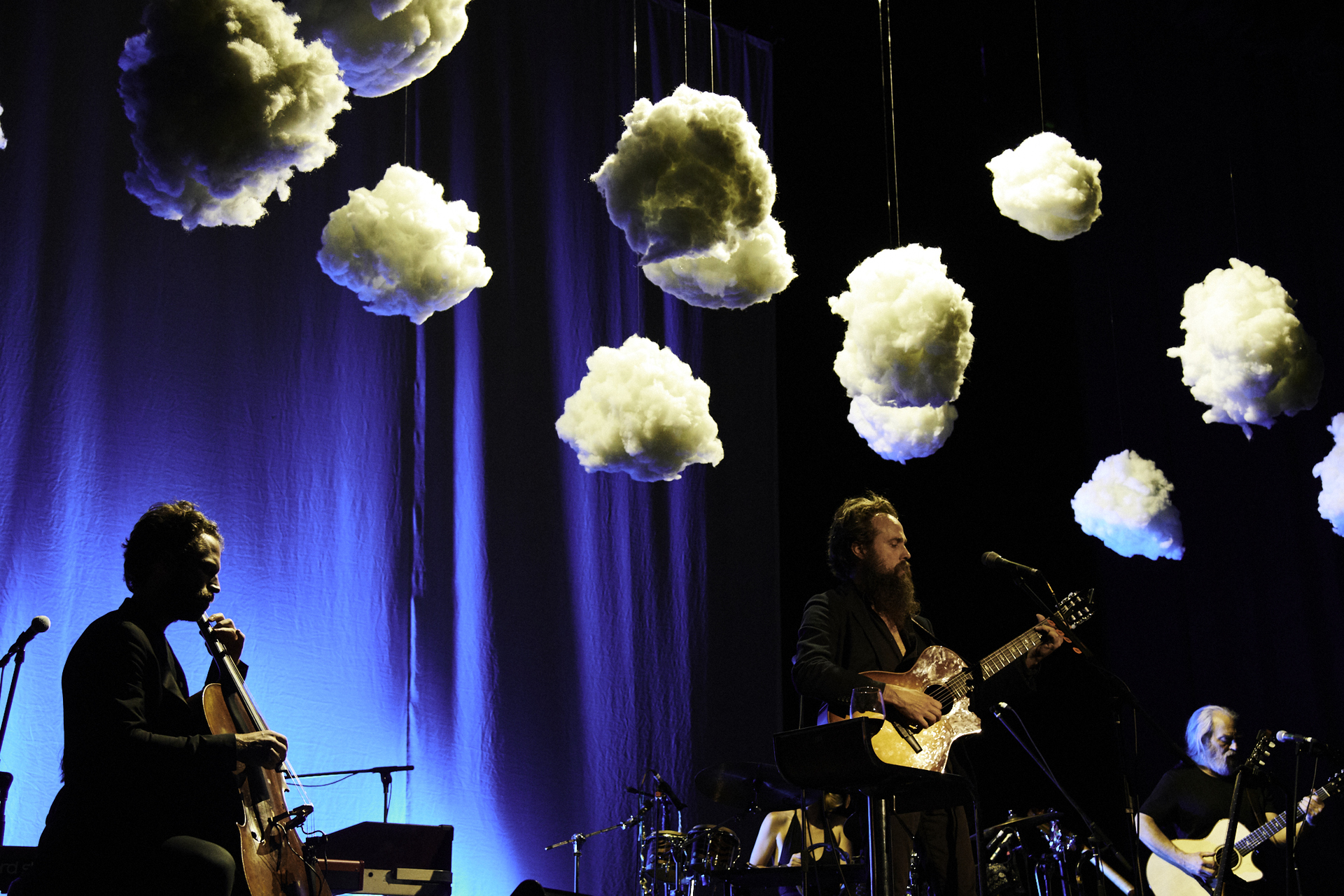 Halfway through the set, the band left the stage for Beam to have his “you and me time” with the audience. Wrapped and illuminated in a soft warm light, he amplified the intimacy of the show with 'Bitter Truth', a rueful song from his latest album Beast Epic. Beam’s raw and wavering vocals were not to be mistaken for a lack of conviction – there was a quiet fury in the unyielding way the man delivered his poetic lyricism. 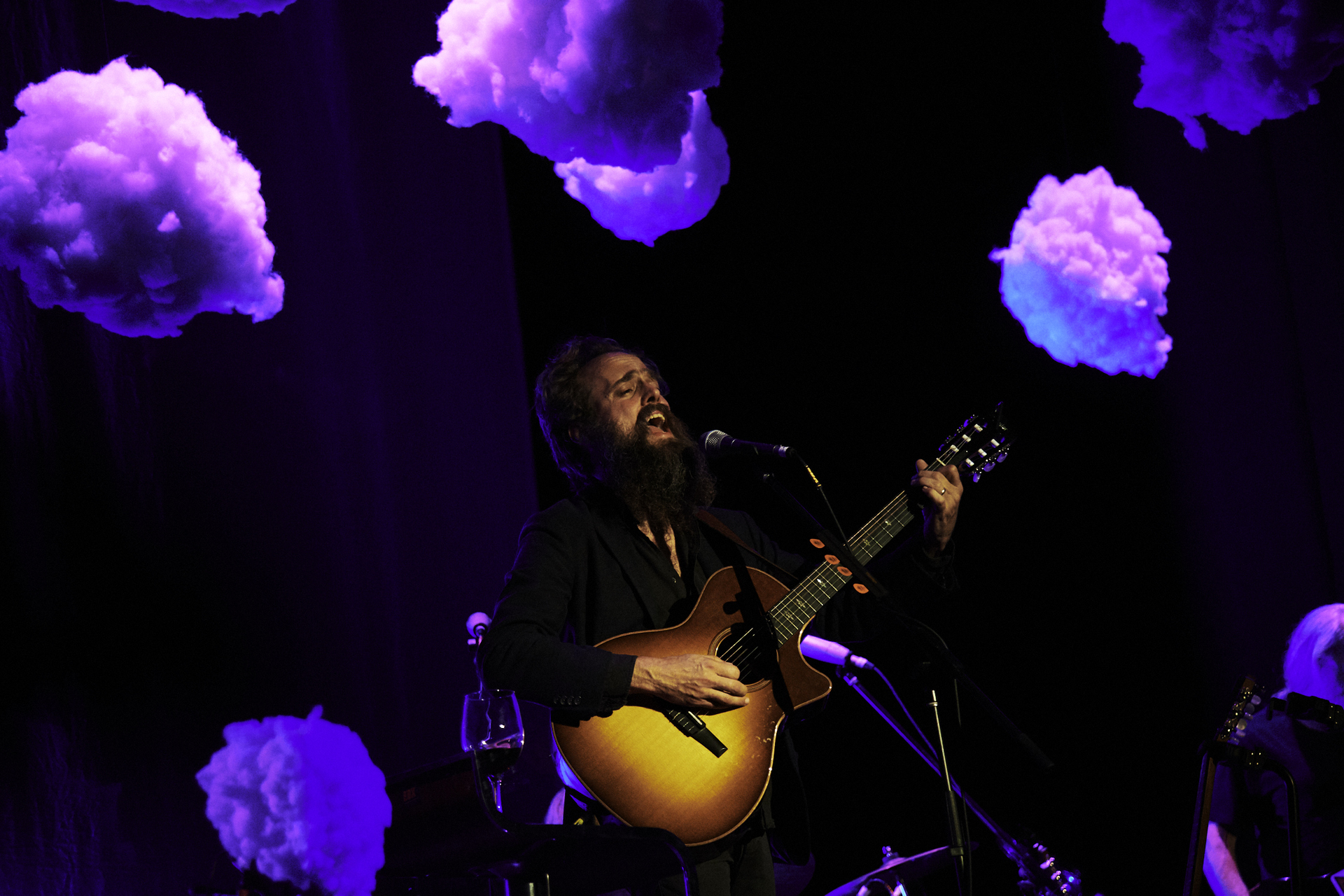 Another memorable moment was the reckless abandon with which the band delved into 'Last Night'. The song began with a sudden cacophony that included unique sounds created by percussionist Elizabeth Goodfellow with objects like chimes and crank noisemaker toys. The changing lights, slide whistles and plucks made for an unsettling and yet simultaneously comforting few minutes. 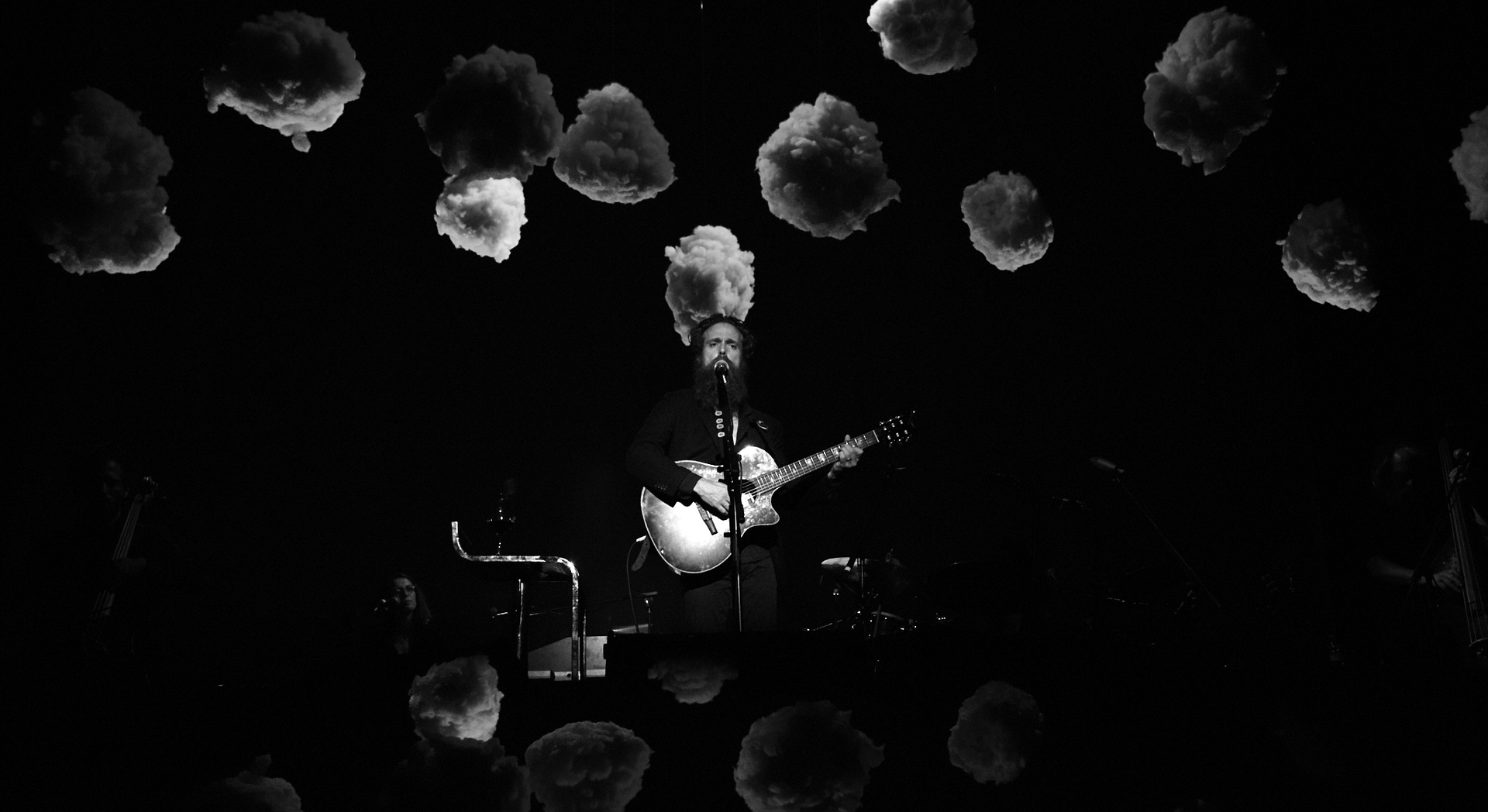 One would have come to realize at this point, that most of Iron & Wine’s music mercilessly teased the audience by bordering between two extremes. His rendition of crowd favorite 'Such Great Heights' saw the foreign enmeshed with the familiar: a slightly different melody than from his usual cover of The Postal Service song. The lack of backup instruments in the heart-rendering 'Lovers’ Revolution' also made space for his soaring vocals and beatboxing, both similarly memorable moments of the show.

Beam and his band closed the show with the new hit 'Call It Dreaming' and the rhythmic 'Monkeys Uptown' during their encore. It was no doubt the effortlessly affable charm Iron & Wine exuded and the sentimental soulfulness of the songs that made for such an intimate show, leaving concert-goers warm and blissful, very much akin to how one gets after a glass or two of... well, wine.