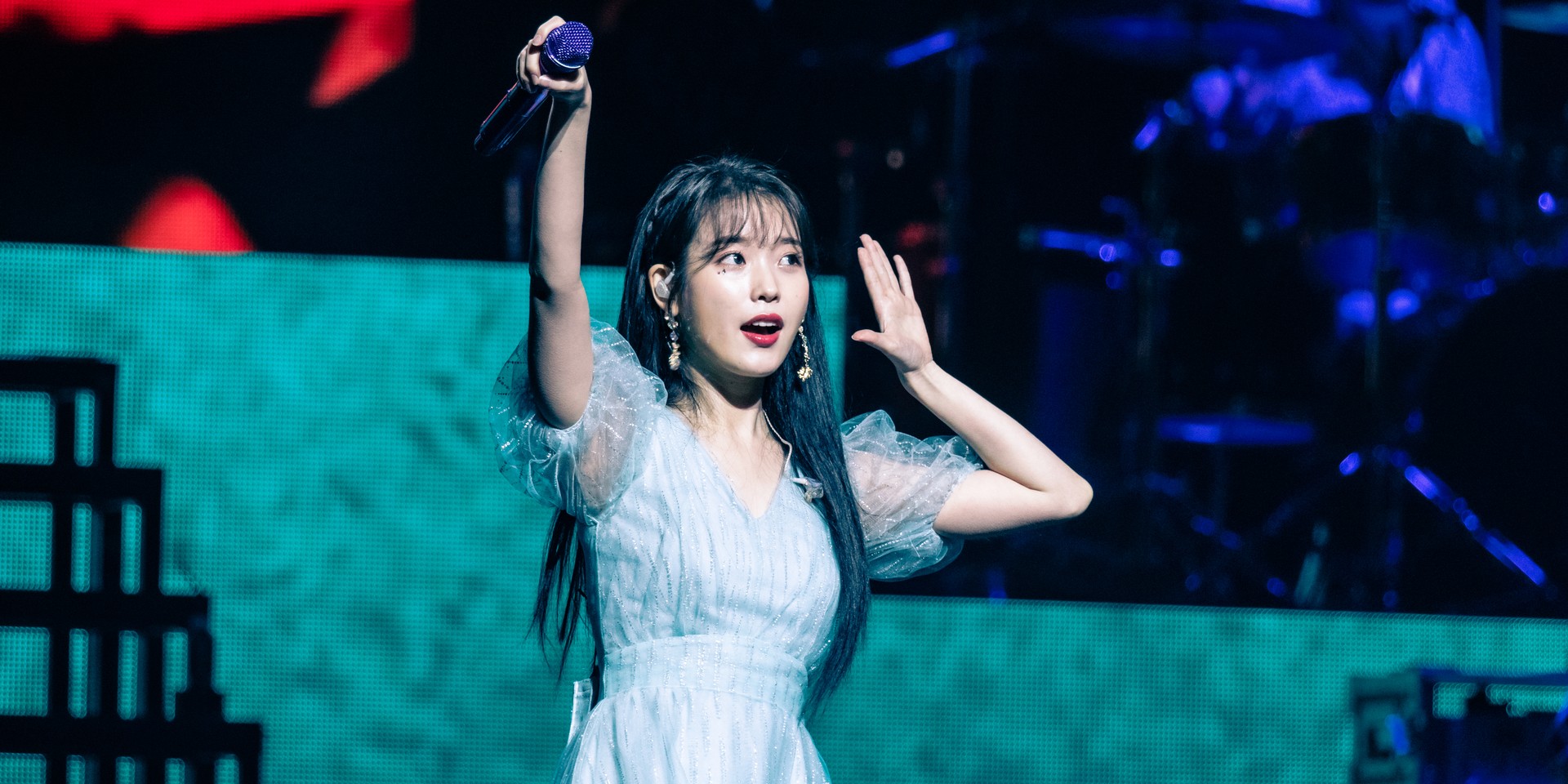 “I came to give love, but it feels like I’m only taking it”.

When an artist transcends the technicalities of artistry, they are left with the distilled, uncontaminated core which is the heart. IU has ascended to that pinnacle in her craft.

Immensely intimate and heart-warming, the two-day concert was not only a testament to her musical prowess, but more importantly, it spotlighted the invaluable and immeasurable things that lay beyond music – her kindness, overflowing heart, and the irreplaceable bond with her fans. Devoid of extravagant stage props, her resplendent presence filled the stage and she shaped the night around a singular purity: Love. 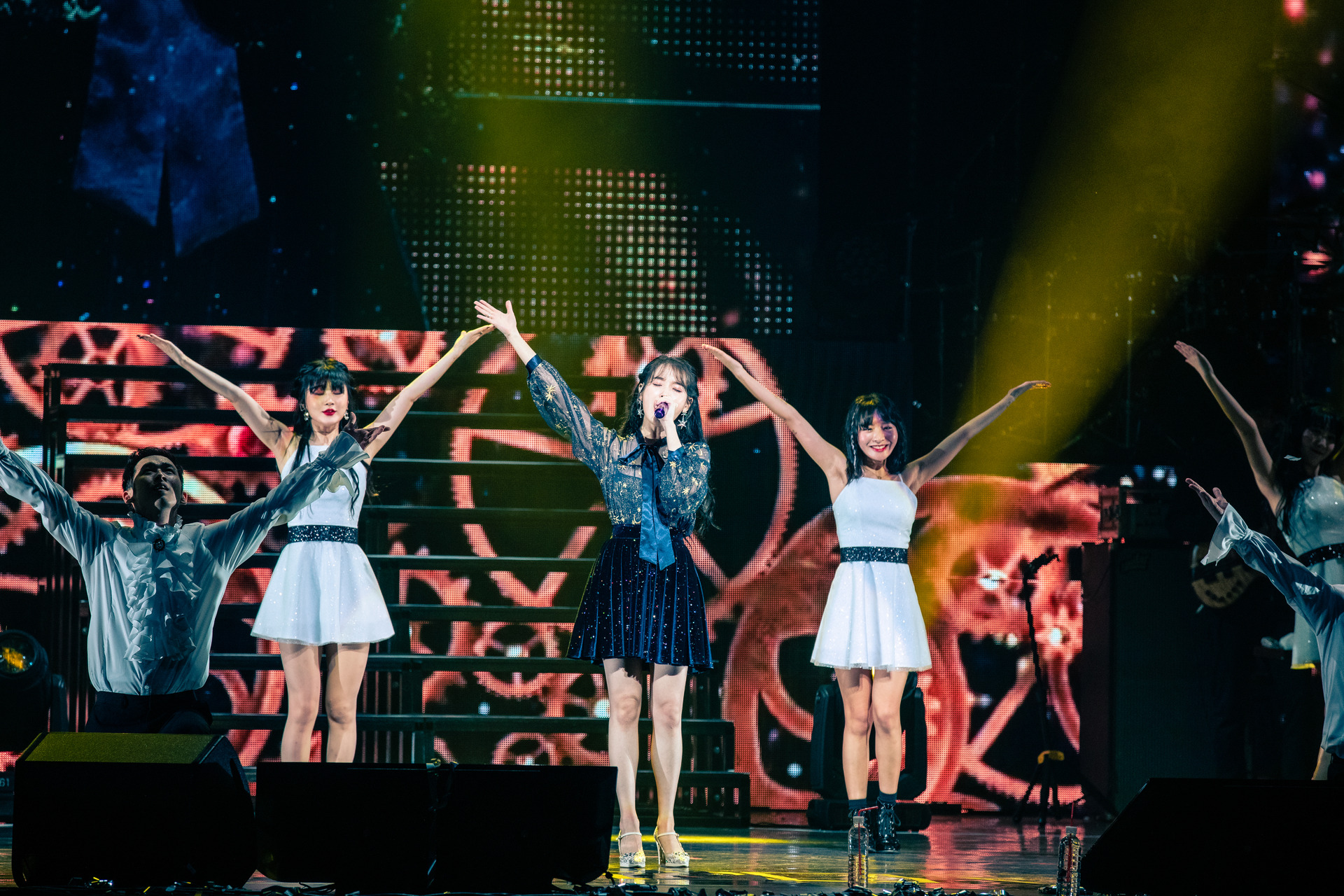 The night unfurled with its first segment, Love for Moment.

IU appeared on stage, delivering her light-hearted opening 'unlucky' with her crew of enthusiastic dancers. Bounding straight into her second song, 'Palette', a simmering, electro-pop track in collaboration with G-Dragon, she amped up the energy and cued the audience to join in a huge singalong.

One word immediately surfaced in my consciousness as I witnessed the section unfold: Healing. In her first speech of the night, she conveyed a sentiment that would resurface throughout the night, "I just want you to feel more loved and receive love through this concert". Subsequently, with her distinct aura of ethereality, she transformed into an utterly convincing storyteller, painting an image that brims with serenity in her audience's minds as she urged, "Try imagining it. Blue skies, the children, lovely families, the lazy sun", before delivering 'Autumn'. 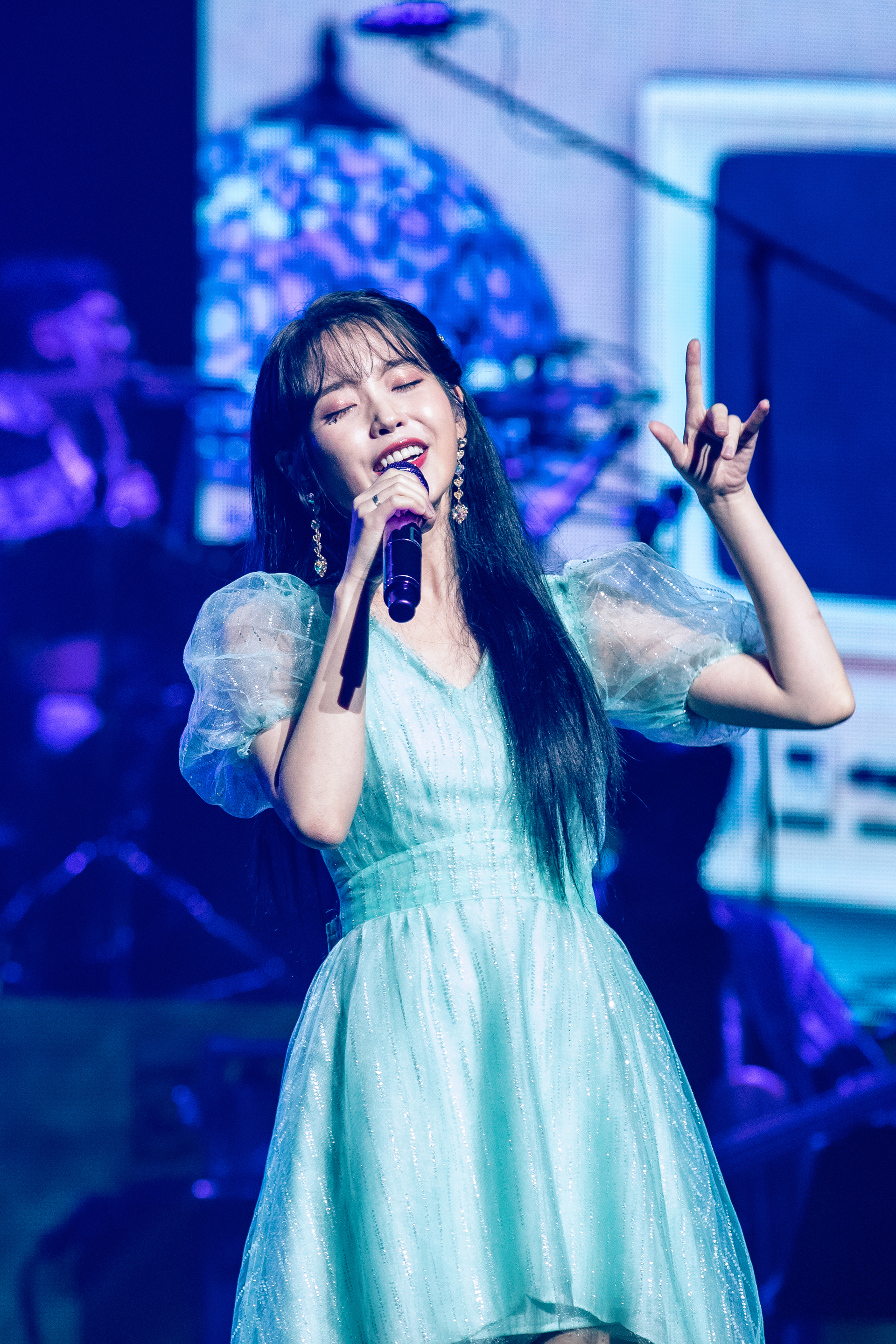 She aptly closed the dreamy, calming segment with 'Secret Garden', complete with mesmerising projections of lush greenery and rippling creeks, as she stood in the middle of all that, searing an enthralling image of blooming into our minds. The poignancy and warmth of the song was amplified by what she said before she began, "The next song is my favourite one. The lyrics are what I wanted to tell myself and to you guys: 'Forget about what happened yesterday, everyone makes mistakes, nobody is perfect, I'm lonely and I have a lot of mistakes'".

As the night progressed, she showcased her multifaceted discography and delivered a series of uptempo, danceable tracks, such as 'JAM JAM', 'Twenty Three' and 'BBIBBI'. Noting the enthusiasm fans had for 'BBIBBI', she laughingly teased that Singapore is truly the hometown of that song. The bubbling energy in the theatre was already overflowing, and it peaked at 'blueming', as the exuberant crowd yelled fanchants (which IU had posted an instructional video of earlier) in tandem.

One of the highlights of the night was when IU delivered a lovelorn medley from the OST of Hotel Del Luna, the internationally famed and wildly successful drama which she starred in earlier this year, comprising 'Lean On Me', 'All About You', 'Remember Me' and 'Happy Ending'. Sincerely expressing that this was a present from her, she also said, "The idea popped up two days ago, so I didn't have much time to practise. It's not my song, but I thought you guys might like it, so I prepared it. Please don't think of me as a singer; just think of me as Jang Manweol". Utterly precious, not simply for the fact that it was a gift, but also because it was an ode to the series and her character, she delivered the medley with reverence, and for a second, we were transported back to the spellbinding, fictional world. 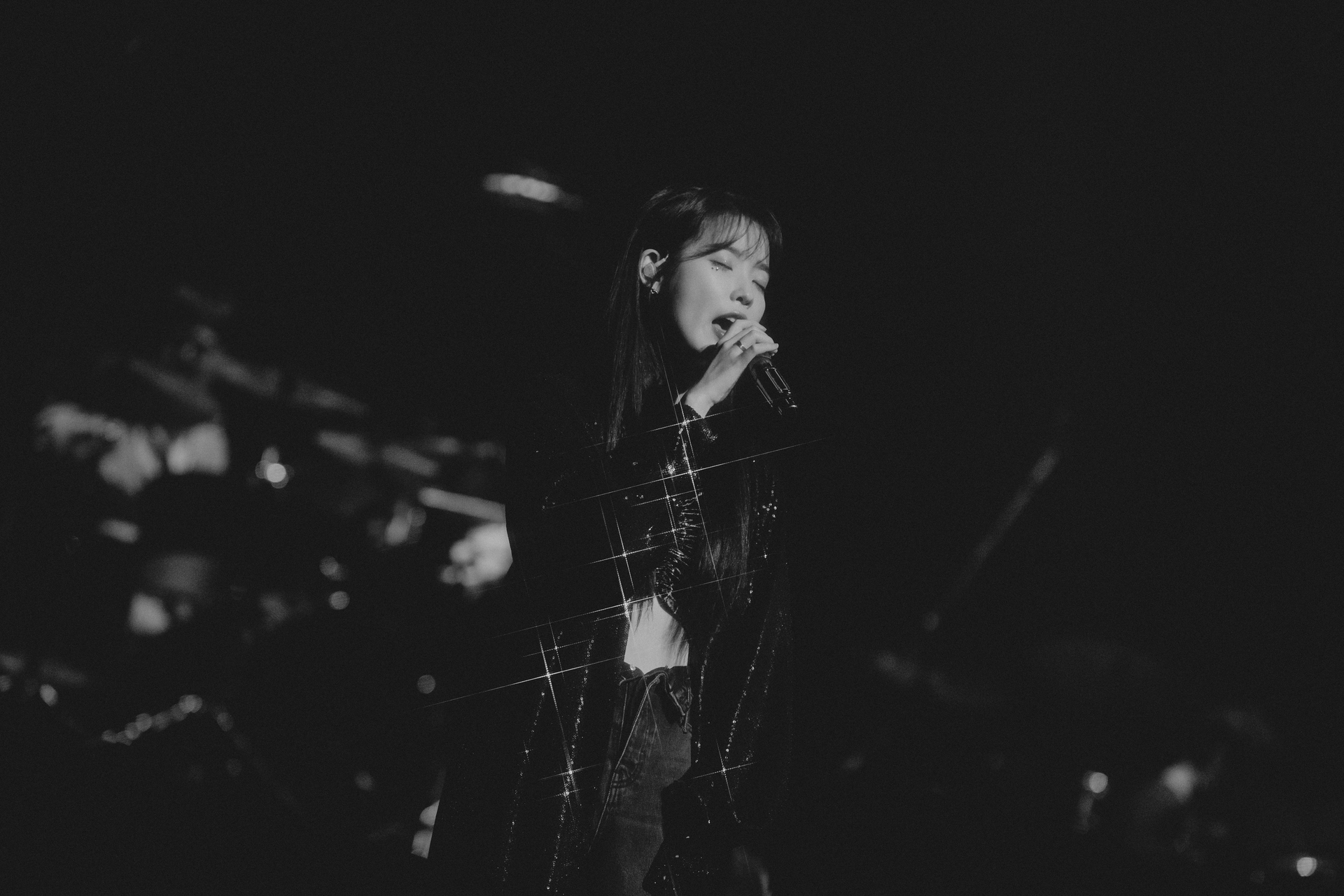 Despite the astonishing run-time of three-and-a-half hours, the concert never once deviated from its laid-back atmosphere; it felt like a get-together with fans she have not met in a year from start to finish. Even as the show stretched on into the night, IU appeared visibly relaxed, reveling in every moment, as her radiant smile sparkled brilliantly till the end.

Towards the end of the night, she delivered a blend of classics and new tracks off her recent EP, including 'above the time' (Being the absolute sweetheart that she is, she said, "Just now, someone said this is their favourite song from the album. I'll sing it well".), 'You & I', 'Good Day' and the track this concert was named after, 'Love Poem'.

One of the most heartwarming and uplifting moments of the night was her encore speech, as she made a promise with everyone present to meet again next year. "When you feel despair and want to end everything, think of our promise today. Day by day, if you live on breathing slowly, it will soon be next year, and we will be back again to make another promise. Life will be easy. I'll do it as well. Promise," she smilingly said as she held up her pinky. 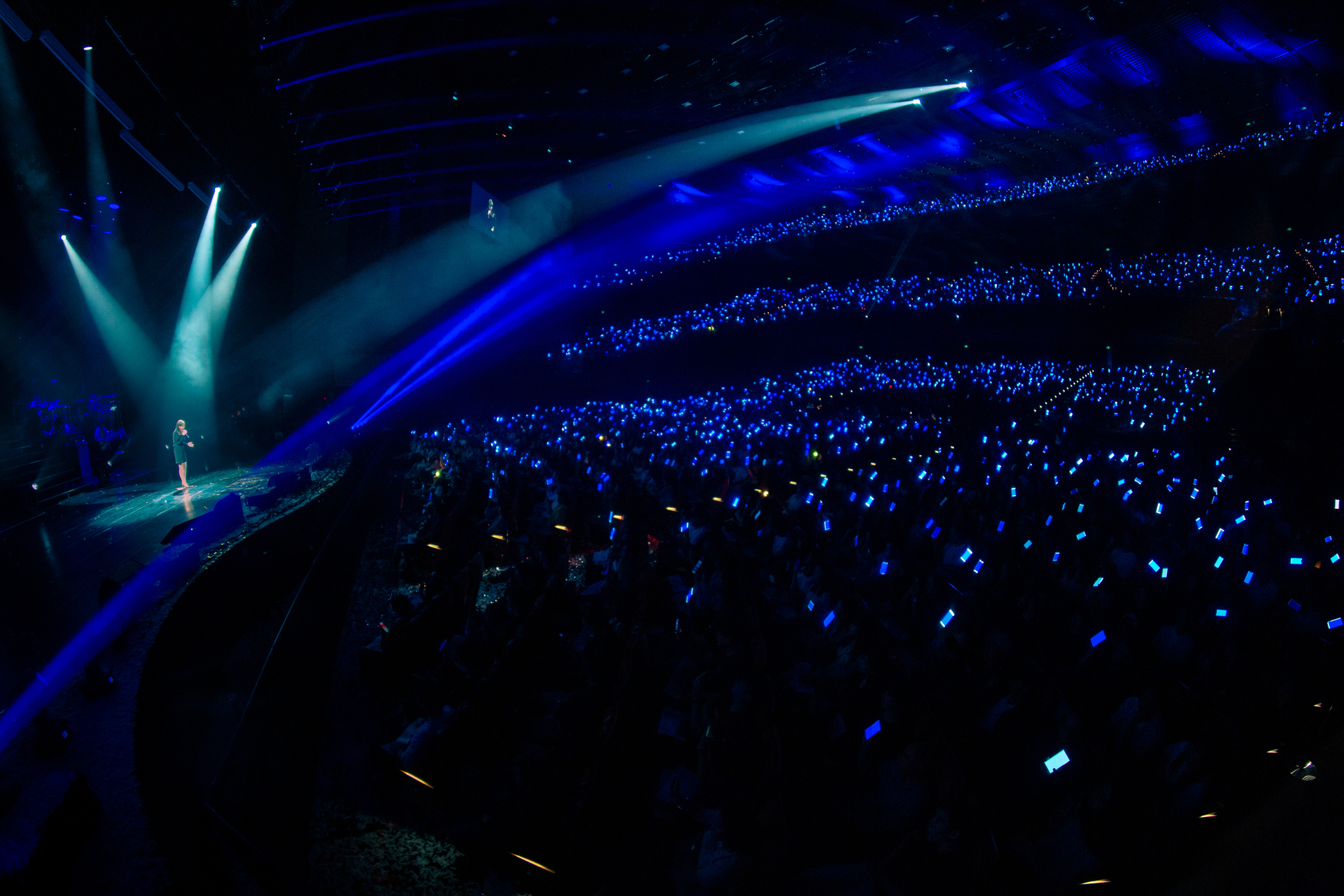 The singular, unparalleled moment that night was when IU returned on stage for a second encore, something she is known to do at her concerts. Decked in a comfortable sweater over a casual, floral dress, she sat at the front of the stage and chatted with fans, even taking song requests. In this final segment, she sang a series of nostalgia-driven tracks, including  'heart', which she transformed into a duet with her fans, 'Sleepless Rainy Night', 'The Night of the First Breakup' and 'Someday'.

The magic lingered in the air long after she exited the stage. With renewed faith, we stepped out of the theatre rejuvenated and with a newfound strength, holding the promise close to our hearts.

Special thanks to iMeSG for the invite.