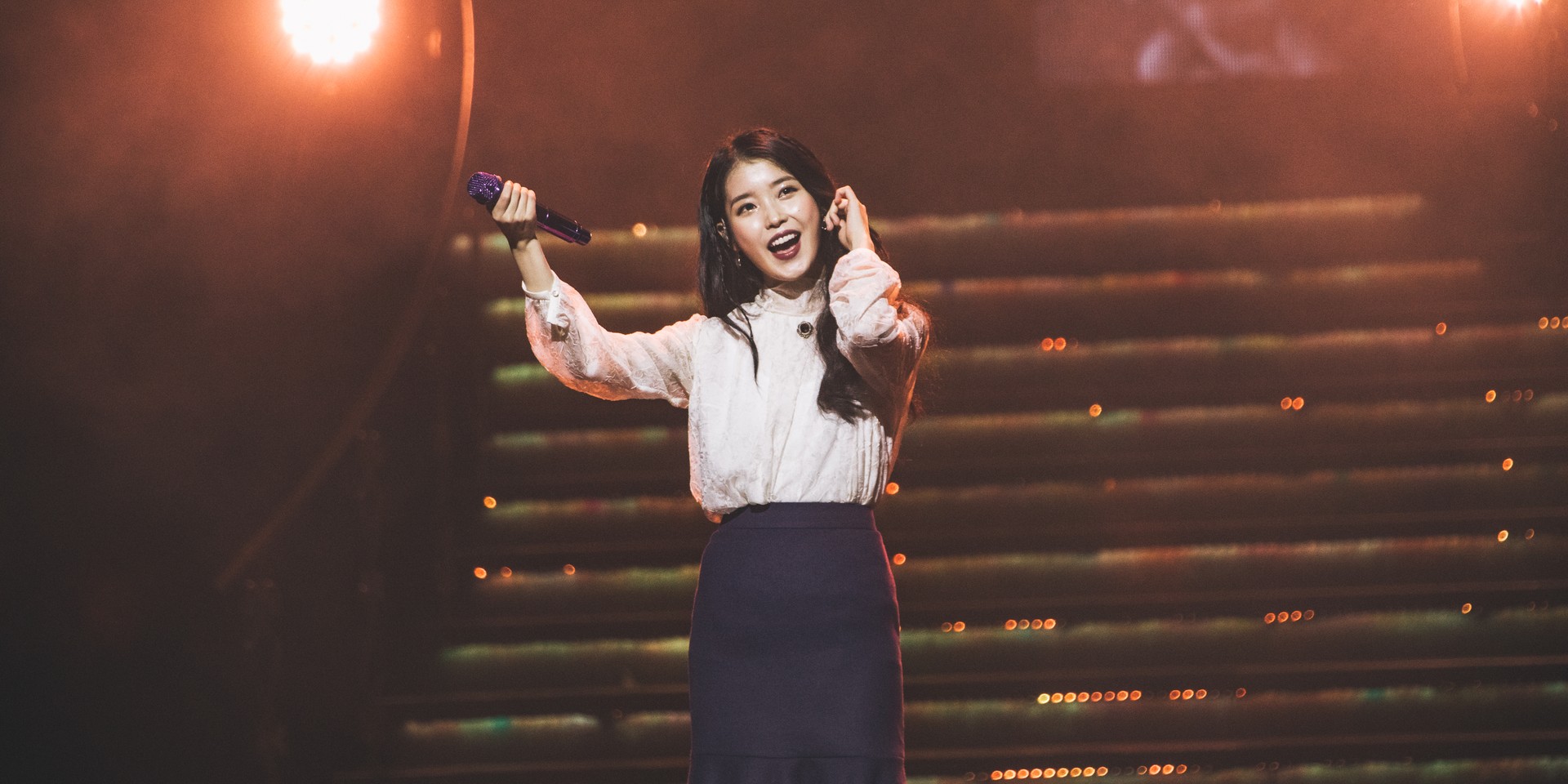 Words by Louisa Chan
Photography by ONE Production

It’s hard to imagine that up until last Saturday (15 Dec), K-Pop starlet IU had yet to step into Singapore for a concert of her own. Boasting a decade-long career, IU has had numerous hits and accolades, commonly known for her wide range of vocals, versatility in showcasing a wide array of genres and most notably, her performing chops — her live vocals often likened to that of the original track. Performing at The Star Theatre in Singapore for the first time, a lot was left to imagination, and IU did not disappoint. Here's what stood out from last Saturday's performance:

Ten years’ worth of discography condensed into a three-hour set — IU certainly had much ground to cover and to make up for for her maiden concert in Singapore, and she made sure she did just that with performances of numerous bestsellers achieved over the years — her breakthrough 'Good Day', 'You & I', 'The Red Shoes', 'Palette', and her latest, 'BBIBBI', among many others. She powered through the show, vocals never faltering, every high note hit, every dance step timed to perfection — much like her famous three-octave high note in 'Good Day', the night was a culmination of her successes and a trip looking back at the highs of her career.

Leaving the past behind 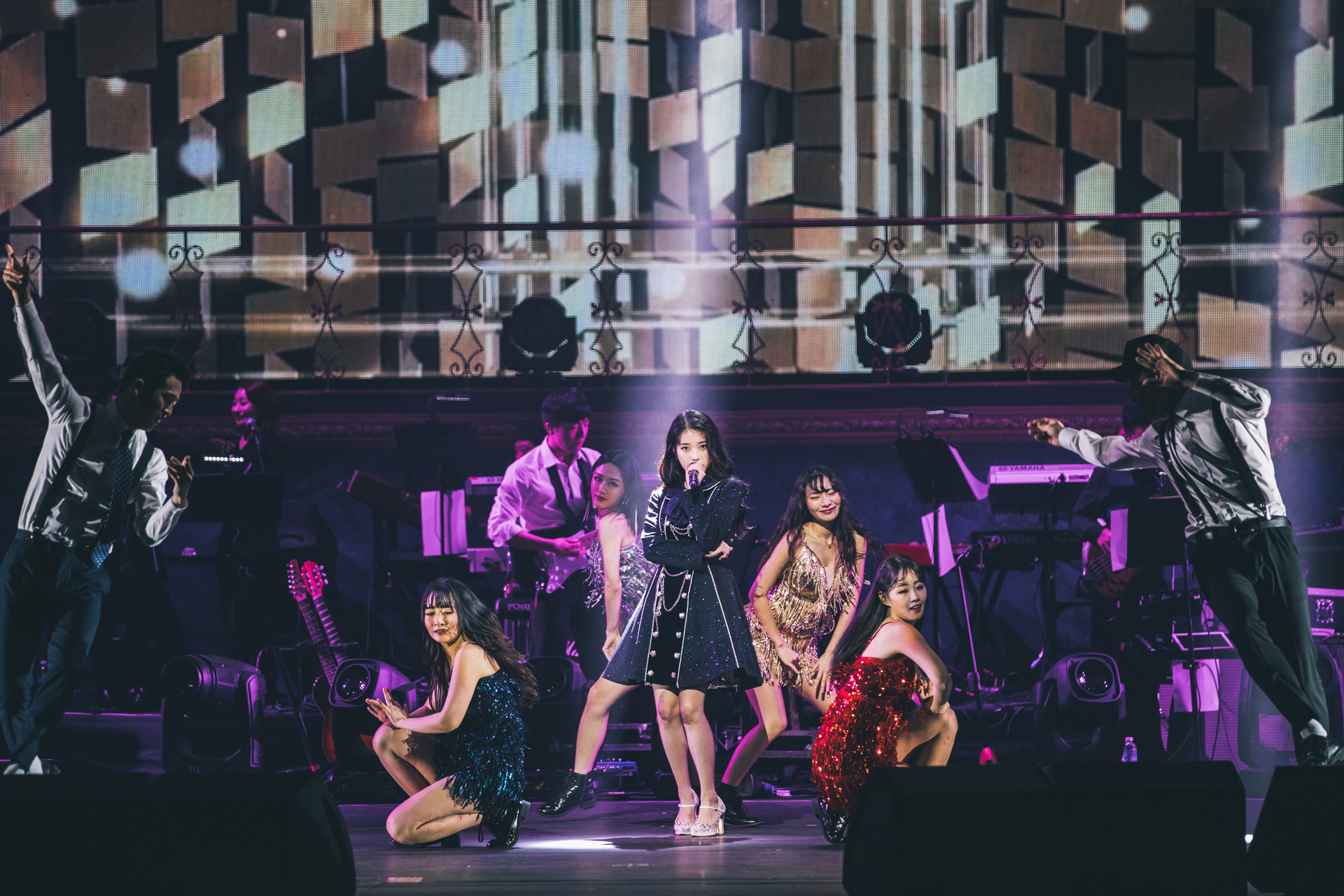 IU's maiden concert in Singapore was not just one of celebration, but a farewell to her "young and cute" self. 'Boo' and 'Marshmallow', which were released in the early years of IU's career featured her youthfulness at 15 to 16 years of age. The singer, now 25, stated that her 10th anniversary tour would be the final time she performed these tracks, but made sure to give these tracks a fitting final lease of life, having her backup dancers dress as cute marshmallow mascots to amp up the adorableness, with one of the dancers entering the stage late, resulting in being (mockingly) reprimanded by the artist herself.

IU — the gift that keeps giving 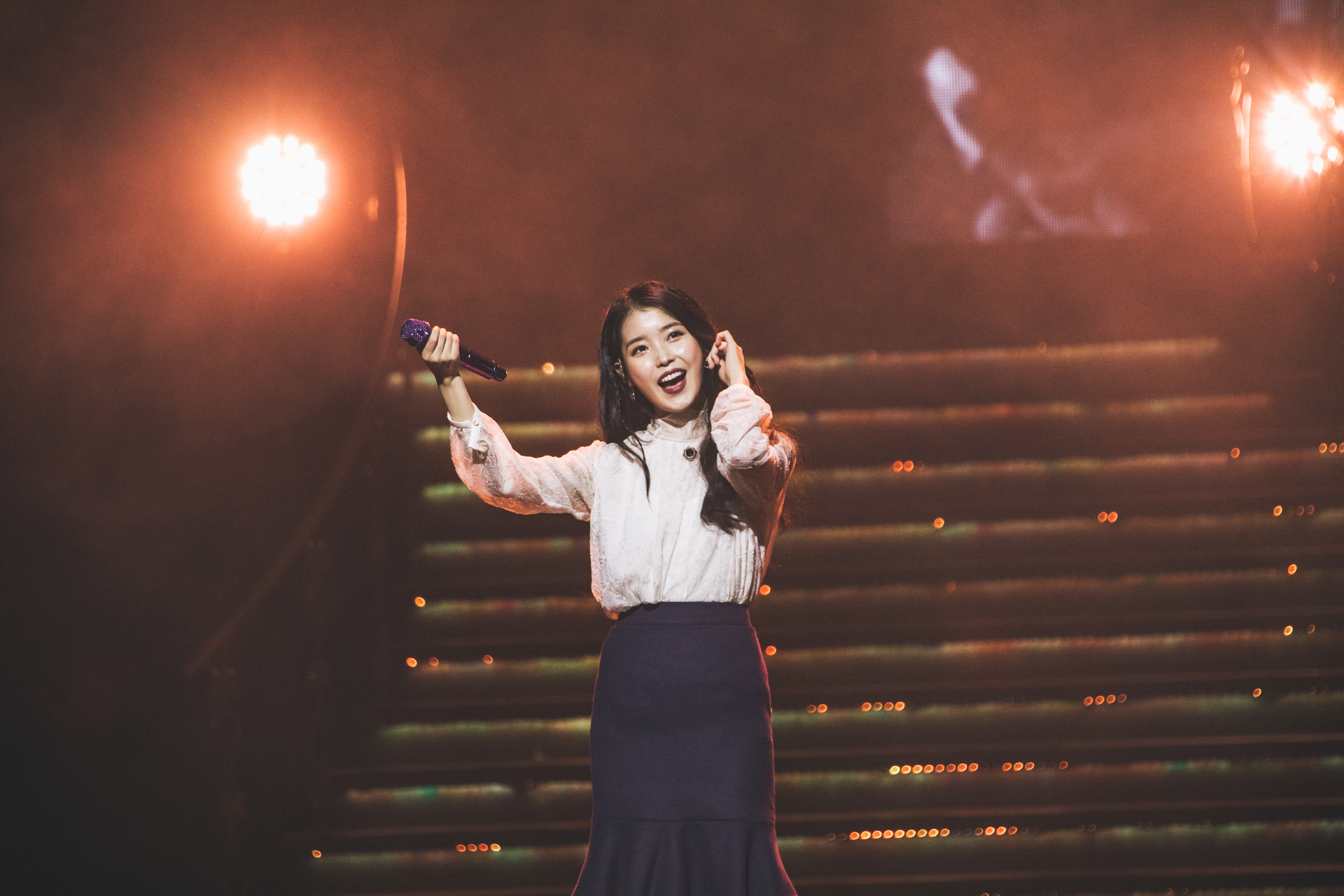 While it's fairly normal for an act to stick to the same setlist throughout the tour, she strayed from the path of rigidity, and made modifications specially for fans. Addressing the local fans (whom she affectionately called Singaena throughout the concert), she told them that she had prepared a special performance of the Mandopop track '愛情 (Love)' by Karen Mok as she "heard many of (her) fans wanted to hear it". While some may have been unfamiliar with the track, they nonetheless responded fervently, one fan in particular, shouting "我也是 (Me too)", in response to the heartfelt lyrics.

That wasn't the end of the tributes, though. Her next performance, an especially heartwarming one, saw the petite 25 year-old specially switching her microphone to a pearl aqua one, serenading fans with 'Gloomy Clock', the performance dedicated to someone she missed dearly and had been on her mind lately. Fans quickly deduced that the singer was referring to the late Jonghyun of SHINee, who features on the track and composed its melancholic lyrics, and many were left emotional after the performance. 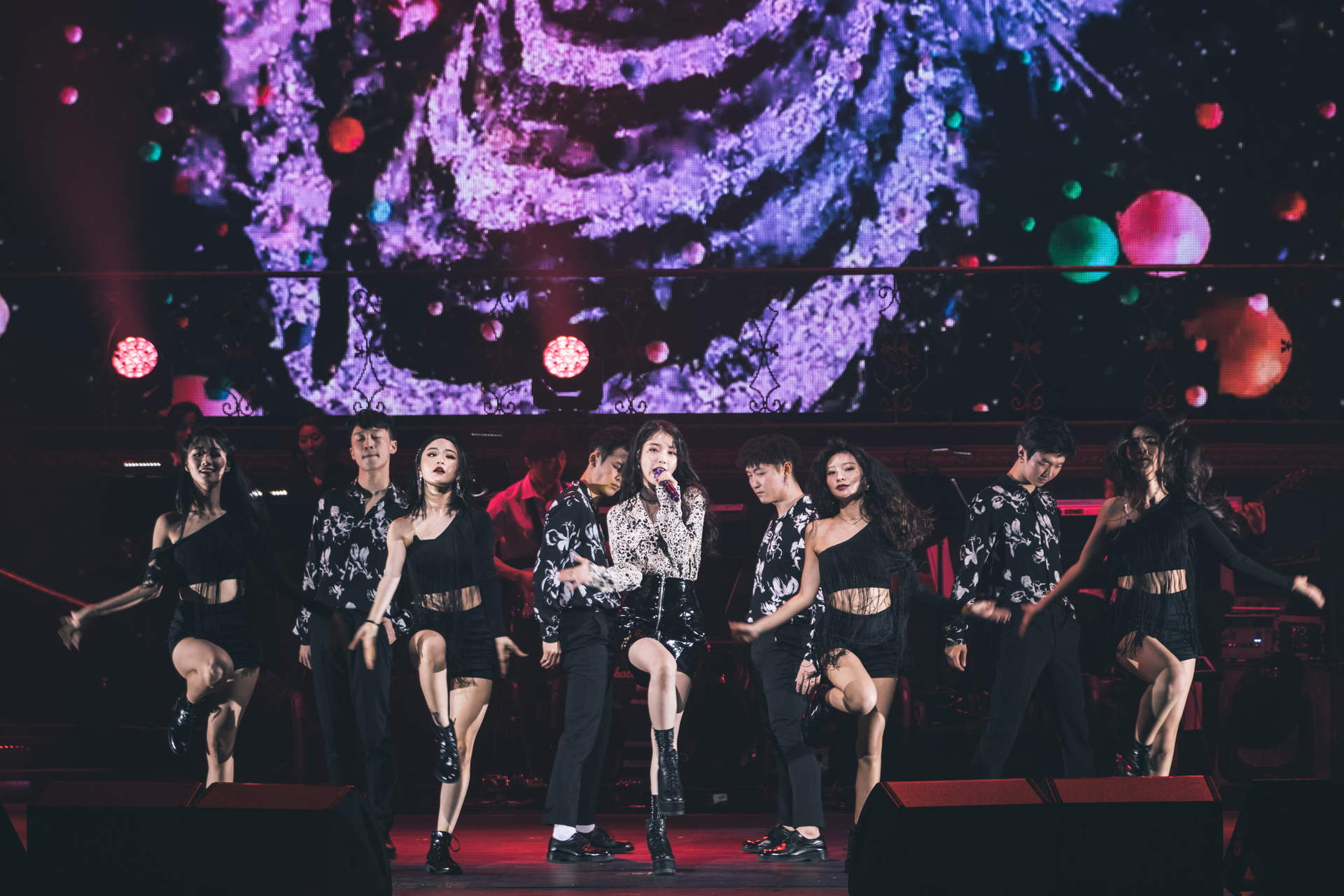 Throughout the show, IU continuously remarked how shocked she was to have a large fanbase in Singapore, and continuously expressed disbelief at the passion and enthusiasm of the local fans.

The icing on the cake though, was the fan project organised by the Singapore fan base — each member of the audience was given a banner with the message “Singaena are shining brightly here” to raise at a certain song and an accompanying fingerlight for use throughout the concert. Never before had I seen a fan project done on such a huge scale — it was clear that the many years of waiting for the singer made fans eager to show their love.

An encore, and another 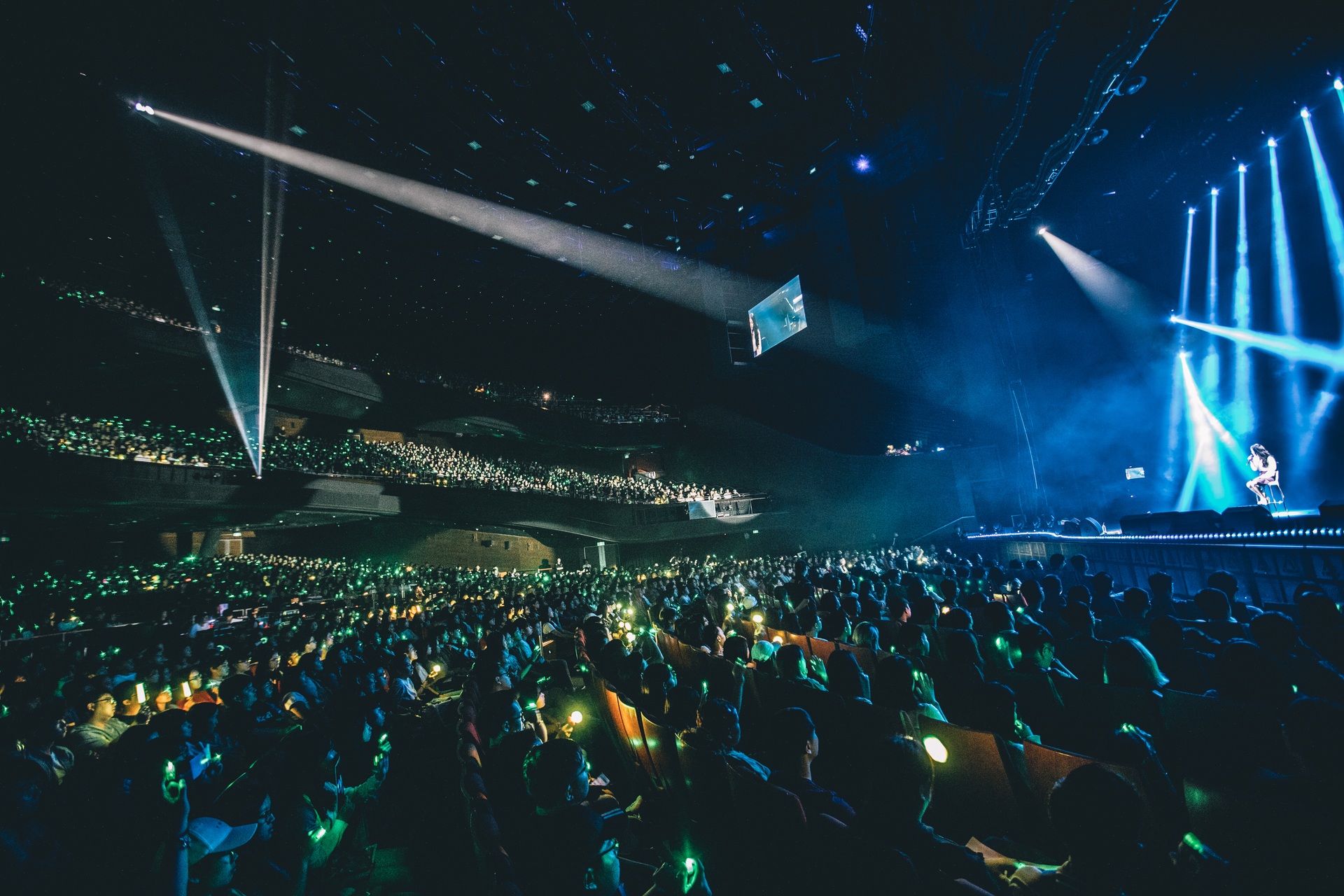 After the initial encore, most fans were reluctant to leave the venue and the memories created within the intimate space, and the singer seemed to reciprocate these same feelings, returning to the stage for a second encore after the credits rolled. In contrast to the ivory white gown that the singer wore in the earlier encore for the "grand finale", she donned an oversized black tee, engaging in conversation with fans, even lifting the ban on photography and videography so they could record the subsequent unplanned performances of ‘The Shower’ and ‘Heart’, much to the fans' delight.

A story to tell 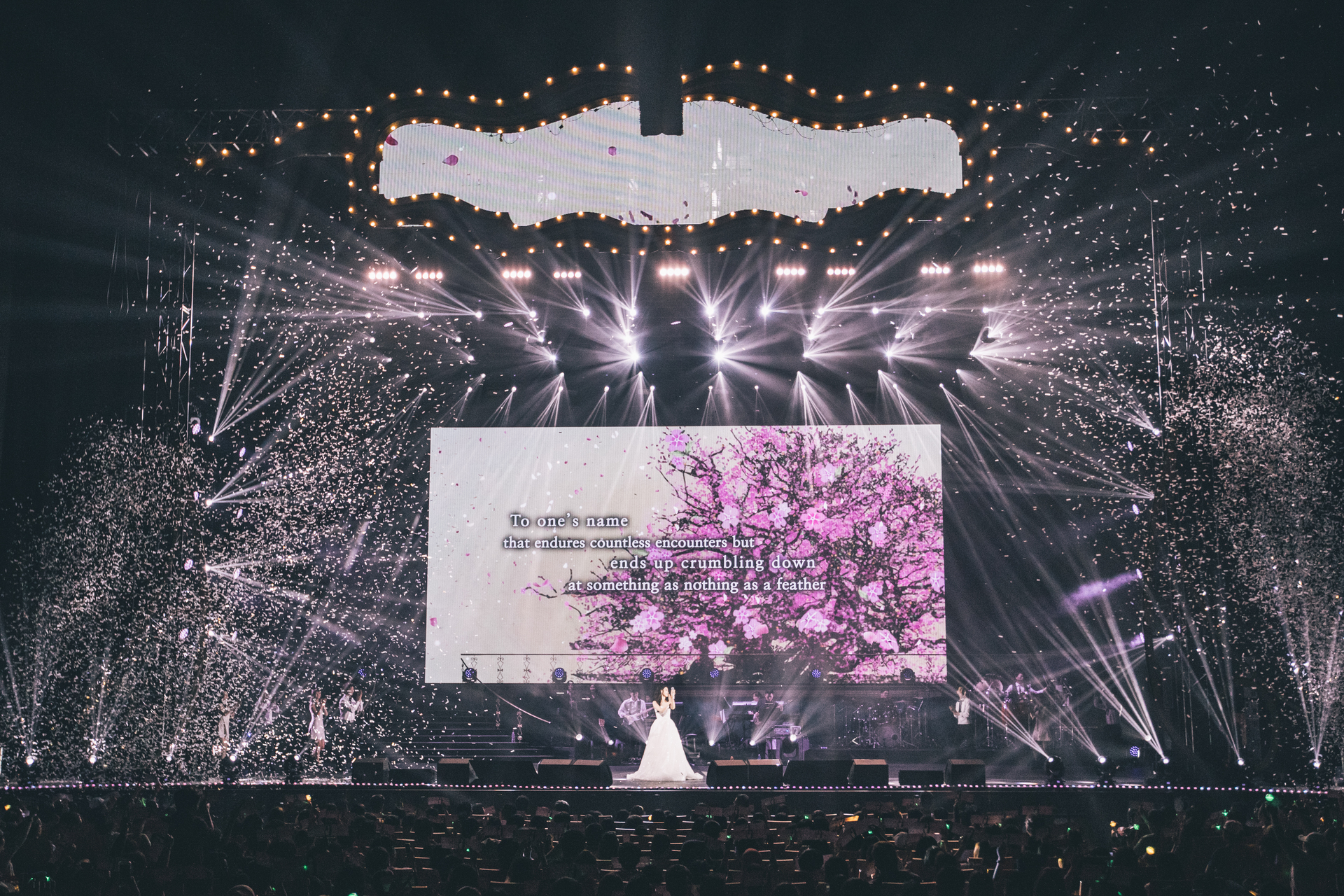 The video that opens show is set in a 1920s silent movie, and sees IU and her staff members going about their last minute preparations for a show, the band ascertaining the number of tracks on the setlist only to be met with indifference from the singer, the dancers making calls back home saying that they'll be held up at work, the starlet herself carrying an air of arrogance around her as she makes final inspections of her overall appearance and makes her entrance to the stage. Another video played during the show has IU's staff members, including her band, backup dancers, and chorus recount what it's like working with the singer. When asked if there are any difficulties in working together, many are quick to narrate various anecdotes about various issues faced, including being upstaged at their own wedding, or having to deal with the singer on a personal, friendly basis due to being in the same age group. It's all very amusing, and gets very real quickly when one remembers that IU's path to stardom thus far hasn't exactly been smooth-sailing, under close scrutiny of the media and public from a young age.

The singer herself reflected on her decade-long career during the show, stating that she used to focus on what the public disliked, and ended up being unhappy and unable to do the things she loved, and it showed in the "dark" lyrics within her music; she further added that she has since changed, and is in a happier state since choosing to focus on people who love her and her work, "now I am able to love myself, and do what I love".

It's extraordinary to think that it's been a decade since IU's debut — already having achieved so much and shown such growth, and while the jounrey hasn't been easy, the singer can be sure of one thing — that her Singaena will indeed be shining brightly here.