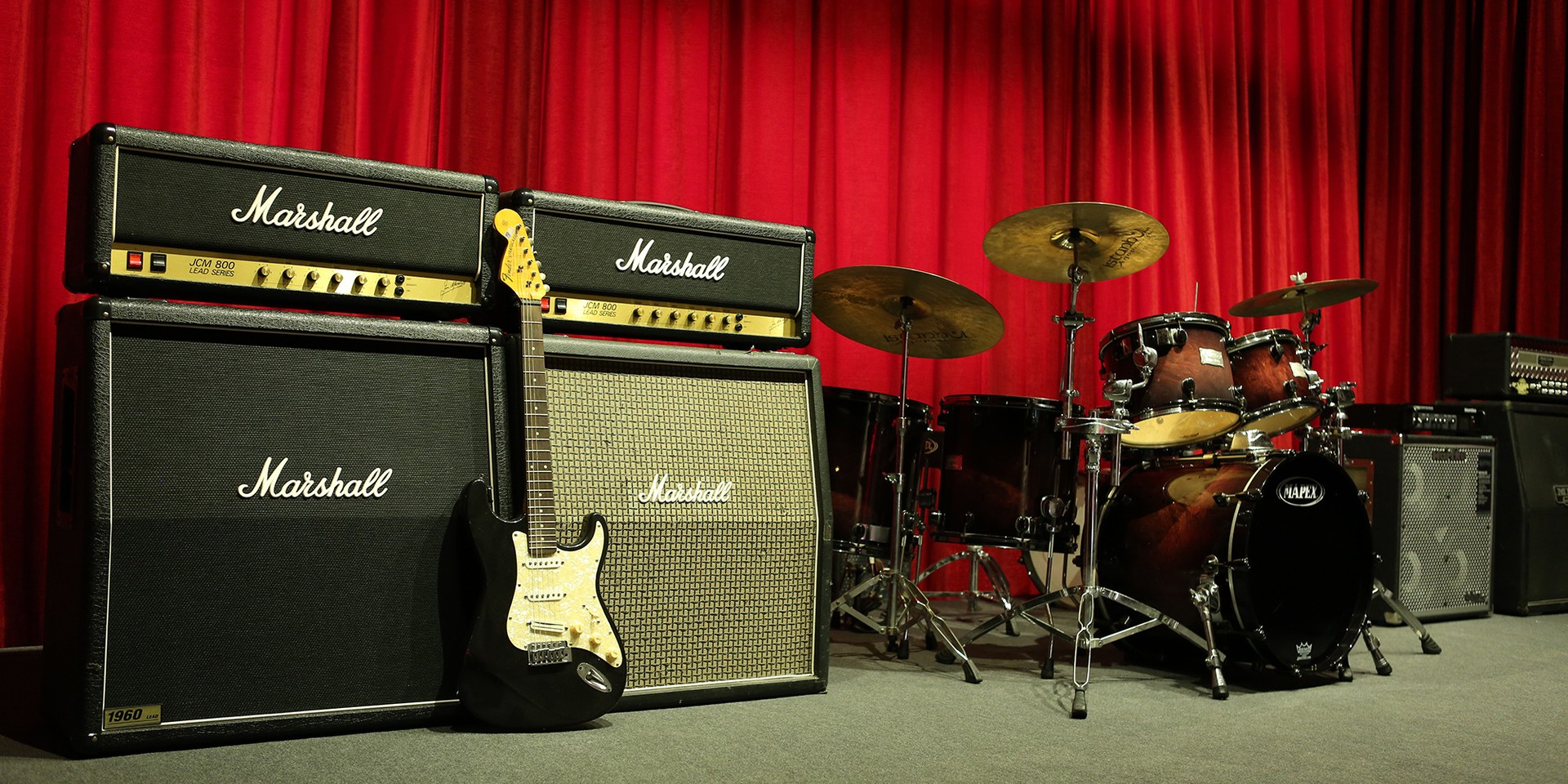 Everyone needs a jamming studio fix once in a while — so we decided that it was time for us to come up with a list of jamming studios in Singapore for the musician in you.

Based on our visits to these places, we've categorized the studios based on why we think you may need the studio. We've separated them into four categories, which are worth some explanation. They are by no means the word on jamming studios, just a word. It's just, like, our opinion, man.

OG Grindhouses have history on their walls, and their no-frills spaces are perfect for both beginners and vets. They’re also most definitely suitable for serious practice and drilling.

Aesthetics Central provide both exemplary spaces and equipment. These studios would especially be great to shoot music videos in.

Chill Vibes helps greenhorns immerse themselves into the jamming studio environment, especially for ones who find the older spaces intimidating.

Serious Spaces are for those who are committed, in some way, to music performance or production.

Jamming studios are often overwhelmed with bookings on certain days, so it's a good habit to call and book a slot before heading down. All rates are given per hour, in SGD. 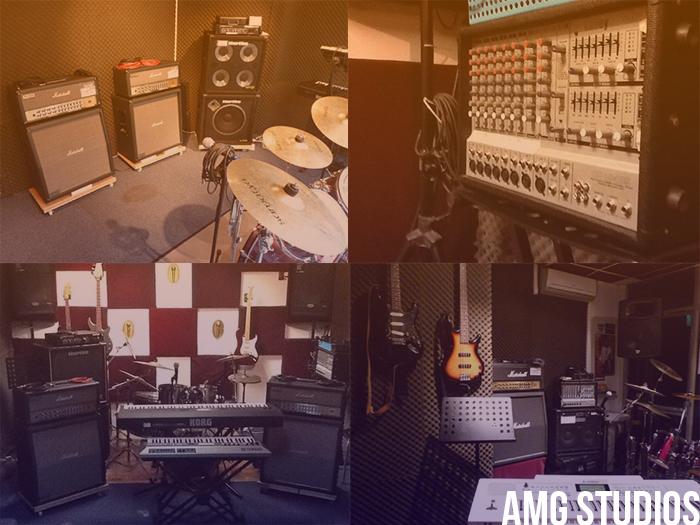 AMG is well known as a provider of gear and backline, but a well-kept secret is their jamming studio. Housed in a comfortable corner of Sultan Plaza, the studio has four rooms, each of different sizes and all holding glass tube amps and drums that are well equipped with Tama Iron Cobra double pedals.

Grungy yet homely, the studio is home to some extremely well-maintained and durable vintage Marshall stacks – so if you’re looking for a place to get some of those 80s vibes going, look no further than AMG. Grindcore band Wormrot is known to patronize this space for their rehearsals. If it's good for a Glastonbury-level band, why not you? 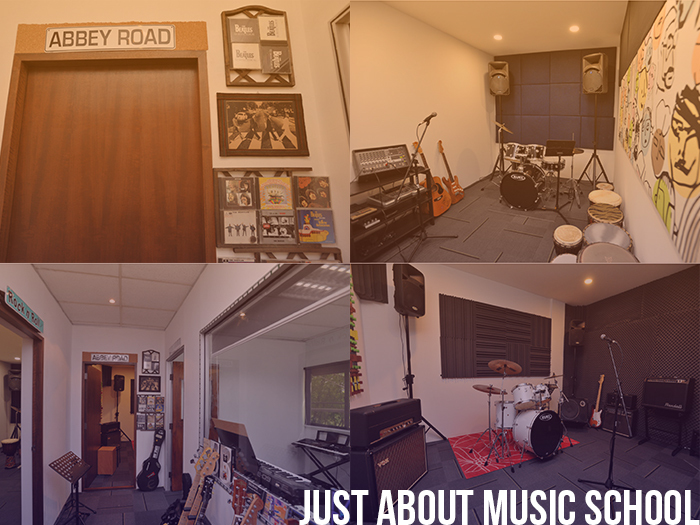 Nestled comfortably in the heart of a recreational centre in West Coast, Just About Music School is ideal for bands that live in the West.

The studio boasts rooms comfortable for an easy jam with your friends. It’s homely and excellent for young jammers — on the walls are hosts of posters of gigs from previous years, which perform the dual role of decoration and inspiration. Equipment is easy to use, so you’ll definitely be sounding like your rock heroes in no time. The studio seems to agree – the rooms themselves are playfully named ‘Rock n’ Roll’ and ‘Abbey Road’. 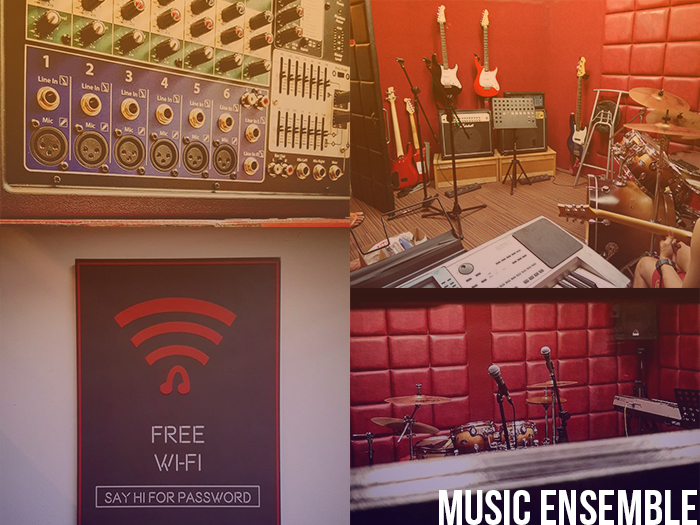 Does your band live all over Singapore? Music Ensemble’s the solution to that. Located just behind SOTA, its central location and modern appeal are sure to attract many. You can even save a dollar (literally) if you go on off-peak days (Mon – Thurs).

The owners have also cheekily attached selfie sticks to the corners of the room so that your band can take jamming videos or sweaty selfies after a session. They also have free Wi-Fi. 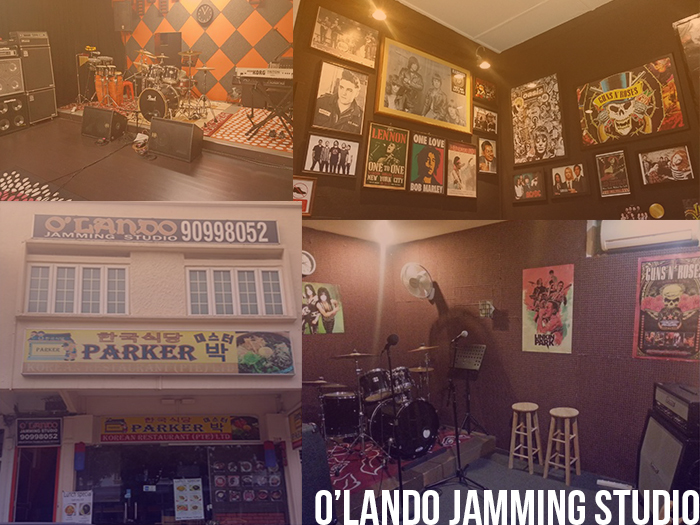 O’lando Jamming studio is a well sought-after jamming studio in the Upper Thomson area. It’s well on its way to becoming a household name among the music community that so often clamours for a central venue to jam.

Offering a smattering smorgasboard of equipment that will delight the average jammer to the professional across its three jamming rooms, the O’lando brand owns another behemoth recording studio with top-of-the-line equipment at Jalan Pemimpin (top left). The Pemimpin studio is open to jammers when it's not being used for recordings. 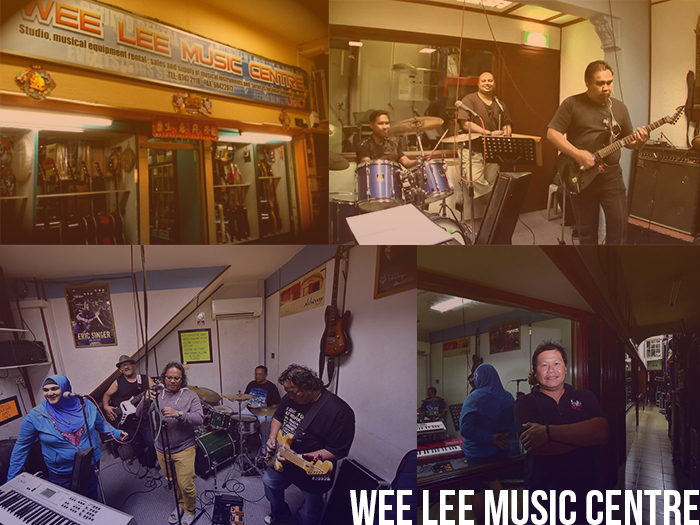 Credits to The Straits Times for the photos on the bottom left and right.

Known for its quaint and easy-to-reach location (within sight of Paya Lebar MRT), the studio presents a prime vintage experience to the jammer. The front desk alone is masked by bars reminiscent of 90s pawn shops, while monitors, drum cases, and speaker cases line the walls of the studio.

The large space holds a magnificent five studios, each of different sizes to cater to bands of different sizes. The equipment inside pays homage to the time-honoured phrase: "old is gold", as vintage Fender and Laney amps are the mainstays of every room. 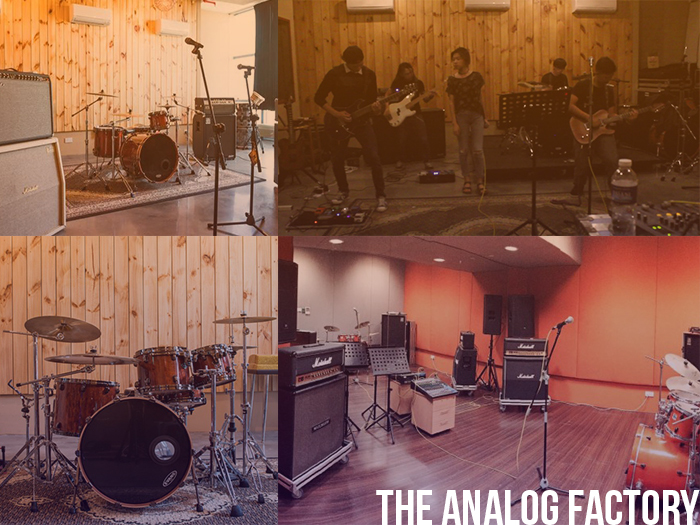 The brand has two studios – one in Woodlands and one at *SCAPE – and we visited the Woodlands one for those who live in the North, far from the intense concentration of studios in town. This behemoth has all the aesthetic design that professional bands will need for shooting a good video.

While the warm lights add to the atmosphere, lightly coloured maple wood walls are far from a sight for sore eyes. The size of the studio is good for large scale bands as well. The 12-piece Wicked Aura have been known to patronize the studio – just like in this gripping performance video produced by JUICE Singapore. 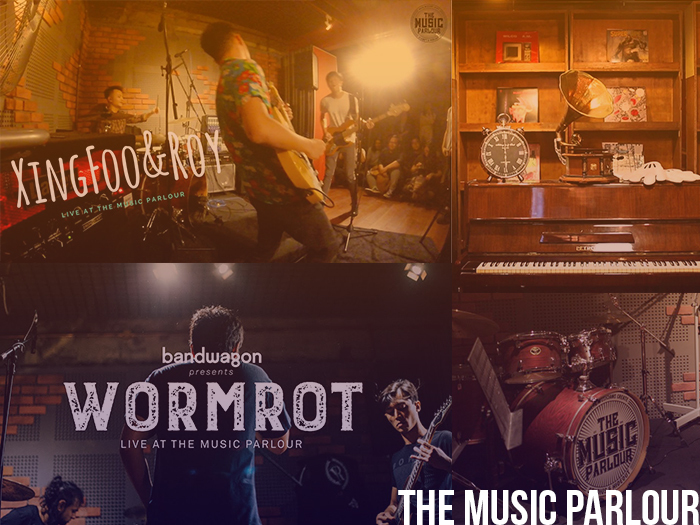 With its foreboding and sleek exterior, the Music Parlour’s door opens to a warm and cosy interior that is sure to put the most nervous at ease.

Featuring three studios that are separated by retractable panels, the studio space can be manipulated to accommodate up to 35 people (sitting) or 50 people (standing). This means you can do small scale shows here too. The downside of the easily changeable studio space is the lack of sound proofing – but if you’re cranking out Megadeth, why would the singer-songwriter next door bother you when you’re reveling in the 'Symphony of Destruction'?

Check out our session with Wormrot at The Music Parlour here: 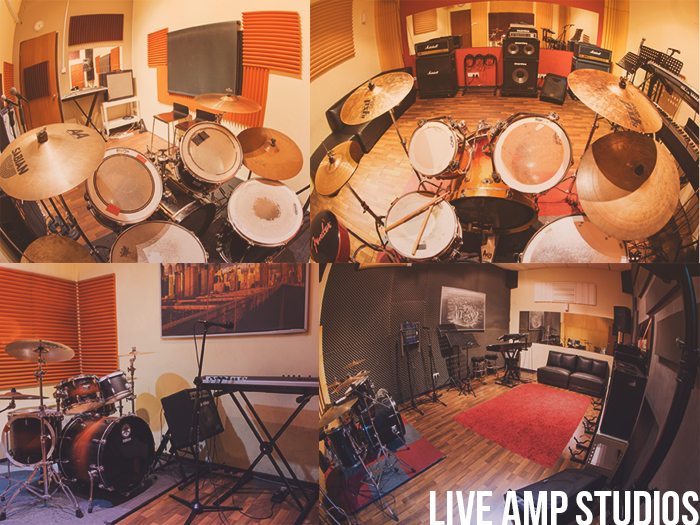 Built with a careful eye, rooms are themed according to the sound a band would need. Some rooms are the home to gear that lends itself to a more bluesy sound, with Fender amps. Other rooms are home to the Kings of Rock – Marshall stacks and Laney bass amps.

Its warm lighting is excellent for filming videos if your band is eager to put out some material online. Live Amp also has special services that you'd be hard pressed to find anywhere else: your band can borrow the in-house 16-track recorder to record some music (with a minimum booking of four hours) free of charge. The studio also hosts regular sessions called 'Jam with the Chiefs', where newbies can jam with industry stalwarts. 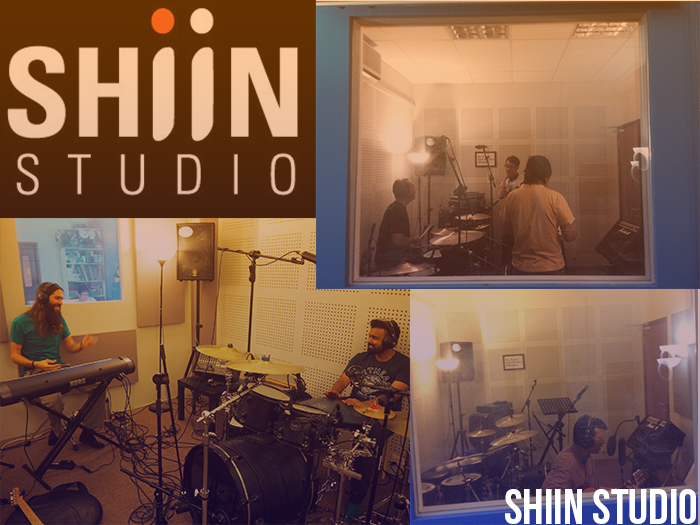 It also has jamming studio facilities that are fantastic to shoot videos in – aside from the well-curated instruments and amplifiers, strategically placed for optimum performance, the studio also features warm lights that set the mood for a laid-back sesh. 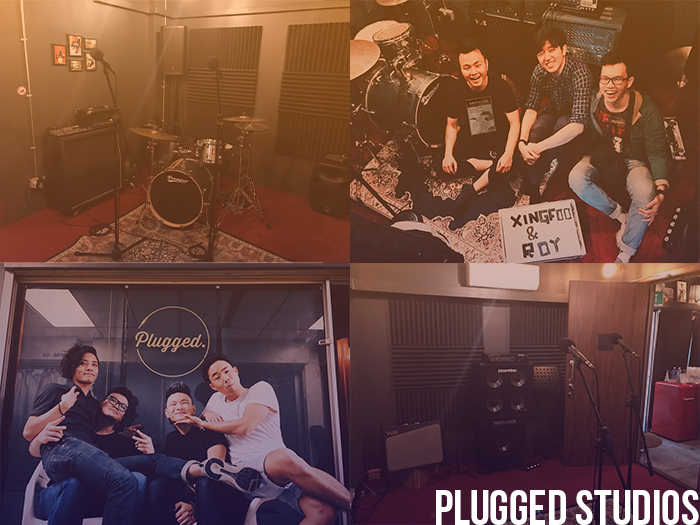 A quaint, small, and cosy studio for someone just looking to unwind with an instrument, the studio welcomes all in its refuge. The studios themselves have a warm and homely vibe, housing top-of-the-line gear.

The owners are also committed to pushing price promos for students, as they're committed to offering a cheap venue in a central location — under their current promotional prices (as of June 2017), the smaller of their studios goes for a whopping $15 per hour, which is a steal for any jamming studio. A host of local bands go here to rehearse, like The Façade (bottom left). 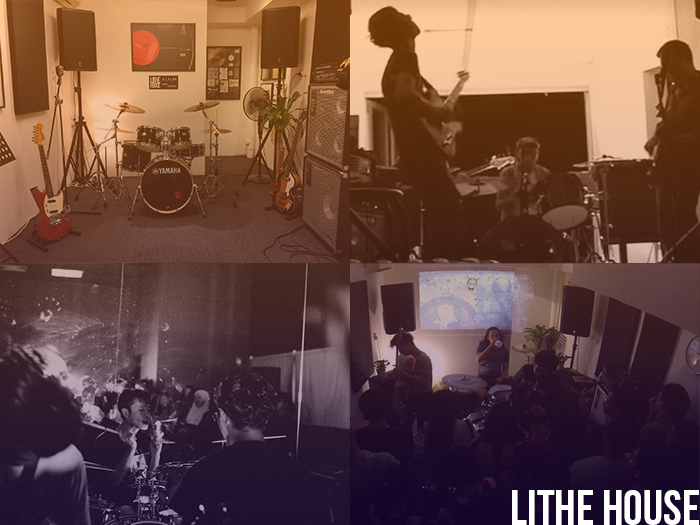 On a rack just by the entrance are copious amounts of local discography, featuring CDs, tapes and vinyl by various Singaporean bands, some released by the studio's label arm, Lithe Records. Further exploration will lead you to TVs that show interviews with famous local bands (when we visited, it was showing an interview with the recently disbanded Caufield Cult), old crumpled letters and vinyl players. It's especially recommended if you'd like to jam surrounded by history. 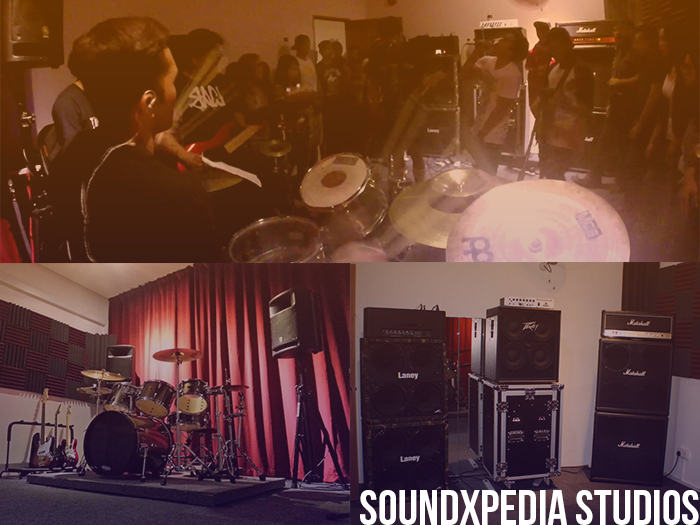 Another one for if your band lives in the infamous Yishun. The studio is tucked away in the corner of an industrial complex, and if that sounds scary, it shouldn’t — the studio and its vibes are anything but.

The studio itself is cosy and ambient, with lights well placed to shoot videos for bands. Adding to the visuals is an entire wall of guitar stacks – Marshalls and Laneys – that create a behemoth of a sound to jam with.

The studio has only one room, and with good reason: owner Din explains that it's to allow the kind of intimate environment for a musician — amateur or not — to thrive in. 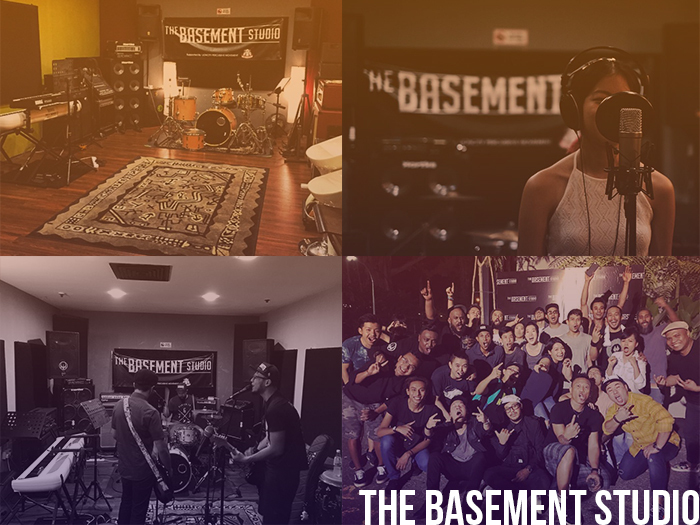 The Basement Studio is a family – a very closely knit group of bands who practice there regularly, who operate on a system of trust. Regular jammers will receive the honour of their adding their fingerprint into the studio’s biometric security system.

But that doesn’t mean to say that they’re by any means exclusive. They welcome jammers of many and any an ilk to jam within their hallowed room, which houses state-of-the-art equipment that's fitting for the pros. Home to a variety of bands like Timbre resident band Sweatshop Jam and hardcore outfit Villes, this studio is largely for those serious about their craft, and for those who want to jam among the very best. 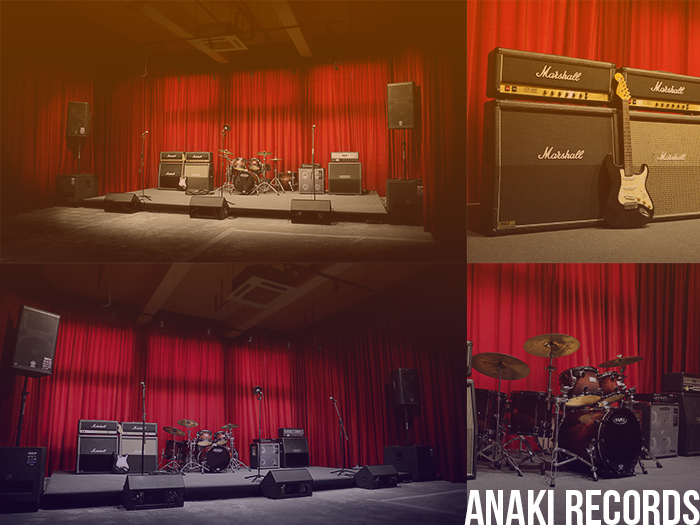 Anaki Records is an old school name that's been in the jamming studio and recording circuit for ages now. While they used to house small studios in Chinatown for a pittance, the studio is now refurbished and back at a new venue, a short 3-minute jaunt away from Aljunied MRT.

Their only rehearsal space is spacious, and in addition to being a rehearsal space, it's also big enough to hold events. The space is home to gear like Marshall, Mesa, and Hartke stacks, as well as a monster seven-piece Mapex Orion drum kit. But premium space comes with premium rates — the behemoth space isn't easy on the wallet.