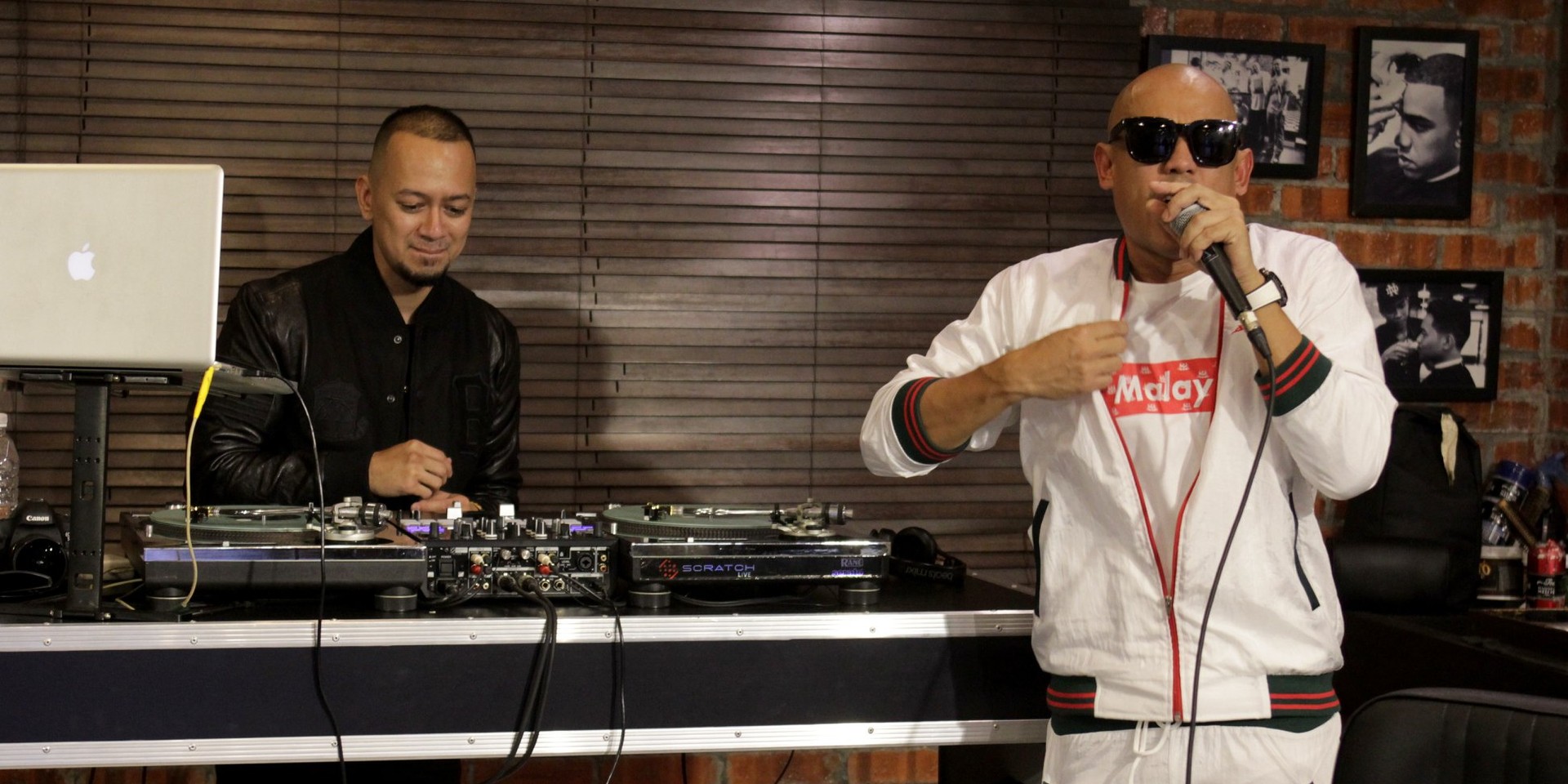 When Malaysian rapper Joe Flizzow opened up his first barbershop in Subang Jaya four years ago, he came up with a way to attract people to his shop: a rap cypher show. Fortunately, there turned out to be no need for such elaborate marketing: his shop attracted long lines daily and the idea was pushed to the back of his head.

But when media company, Rocketfuel Entertainment (formerly  Astro Digital Publications), extended an invitation to him to work on a show based on social media, the idea emerged again. That's where 16 Baris began.

With the help of DJ CZA, the rappers freestyle over hot tracks like 'No Flex Zone' by Rae Sremmurd, 'Bad and Boujee' by Migos and 'Butterfly Effect' by Travis Scott. The show is exclusively on YouTube and has gone viral ever since. A new episode drops every week (the team shoots three episodes each time) and 16 Baris just wrapped up its first season with 15 episodes and a bonus episode featuring Joe Flizzow himself.

The show instantly received attention and support, with over 38,000 subscribers on YouTube and 16,000 followers on Instagram and a combined social media reach of over a million to date, according to Says. Hip-hop fans have become devoted to the show, deciphering bars and analysing lyrics in the comments. "The understanding of hip-hop is so deep these days, it's great," Joe tells Bandwagon.

The very concept of the show involved social media, which has been instrumental to its growth: 16 Baris has encouraged fans and rappers to use the hashtag "#16BARIS" to submit their own 16 bars. As a result, 5 out of 45 rappers featured on the show were discovered through the hashtag: Ilyas Konlay, Hades, Lil J and Singapore’s very own Fariz Jabba and Yung Raja.

“It’s great we get to use social media. Back in my day when I wanted to for an audition, I had to speak to like 10 people in my label before I finally got into a studio for an audition. Now, you just pick up your phone, rap into the camera and 5 minutes later, Joe Flizzow’s watching you,” Joe laughs.

16 Baris is not only an opportunity for new rappers to be discovered but it is also an opportunity for Joe to spend quality time with these rappers, whom he handpicks for the show, and to foster community in the Southeast Asian rap scene.

“Somebody gave me a suggestion early in the season like: ‘Why don’t you do an all-Tamil episode or an all-Chinese episode?’ Nah, no way. I’m not gonna segregate, that’s the last thing Malaysian hip-hop needs,” Joe says. It's notable that besides having a multi-racial cast of rappers, there have also been female rappers on the show, like Zamaera, Kayda and Hades.

"'Why don’t you do an all-Tamil episode or an all-Chinese episode?' Nah, no way. I’m not gonna segregate, that’s the last thing Malaysian hip-hop needs," – Joe Flizzow

With 16 Baris, what you see is what you get. Rappers don't do multiple takes; there are sometimes bloopers but those come mainly from Joe, DJ CZA and the other rappers fooling around. And with many things in music, 16 Baris is also to some extent a labour of love. The show has no sponsors, which Joe says is his biggest regret from the show's first season.

"To a certain extent, I wanted to keep it that way because I want to keep it organic," he says. Having big brands get involved with 16 Baris could "take away originality and credibility, but having said that, having a sponsor would really help. Number one, maybe I could pay the artistes. For season two maybe we'll get to pay them a little token, at least. And by having a sponsor, I can fly in more rappers from overseas." All the non-Malaysian rappers in the first season paid their travel bills themselves.

When asked about the state of rap in Southeast Asia, Joe is quick to note that even before 16 Baris, hip-hop culture had already been growing and thriving in the region over the past few decades.

That's evident from graffiti becoming more accepted and even recognised as an art form, how Malaysian b-boys and breakdancers are flourishing at home and abroad, and even the success of Yuna. "Some people might argue that Yuna is not hip-hop but for me, Yuna is a hip-hop Malaysian act – she worked with DJ Premier, she worked with Pharrell."

Joe is also adamant that what young, inexperienced rappers do on 16 Baris should only be the springboard for the rest of their careers. Debates over who's the best rapper will always rage, but when a rapper has a strong body of work, that can't be argued with, Joe says.

Sometimes, young rappers get caught up in hype, Joe says. "'Ah, 20 people think I'm nice so I guess I'm nice.' But it's not that. There's another 30 million people to convince." And some seized the opportunity 16 Baris presented them better than others.

"If you look at some of these kids that had the chance of popping off 16 Baris, some of them took the baton and ran with it," he points out. "Meaning, after 16 Baris, there's work, every week there's releases, there's new releases. So they build. Some of them got caught up in the moment and like shit, that was my 15 minutes of fame. And then next thing you know it's done."

Regardless, it's undeniable that with 16 Baris, Joe and Rocketfuel have reinvigorated the Southeast Asian hip-hop scene by giving rappers both new and experienced a new, exciting platform to showcase their work. A second season is in the works, and 16 Baris will cap off a triumphant first season with free performances from rappers featured on the show this Saturday in Kuala Lumpur. The celebration is well-deserved: 16 Baris truly does it for the culture.

16 Baris will be holding a live performance on the 14th of April at The Bee, Publika, Kuala Lumpur from 8pm to midnight. Most of the 16 Baris rappers will be there including Airliftz, Fariz Jabba, Kayda, Sonaone and Yung Raja. The event is free. 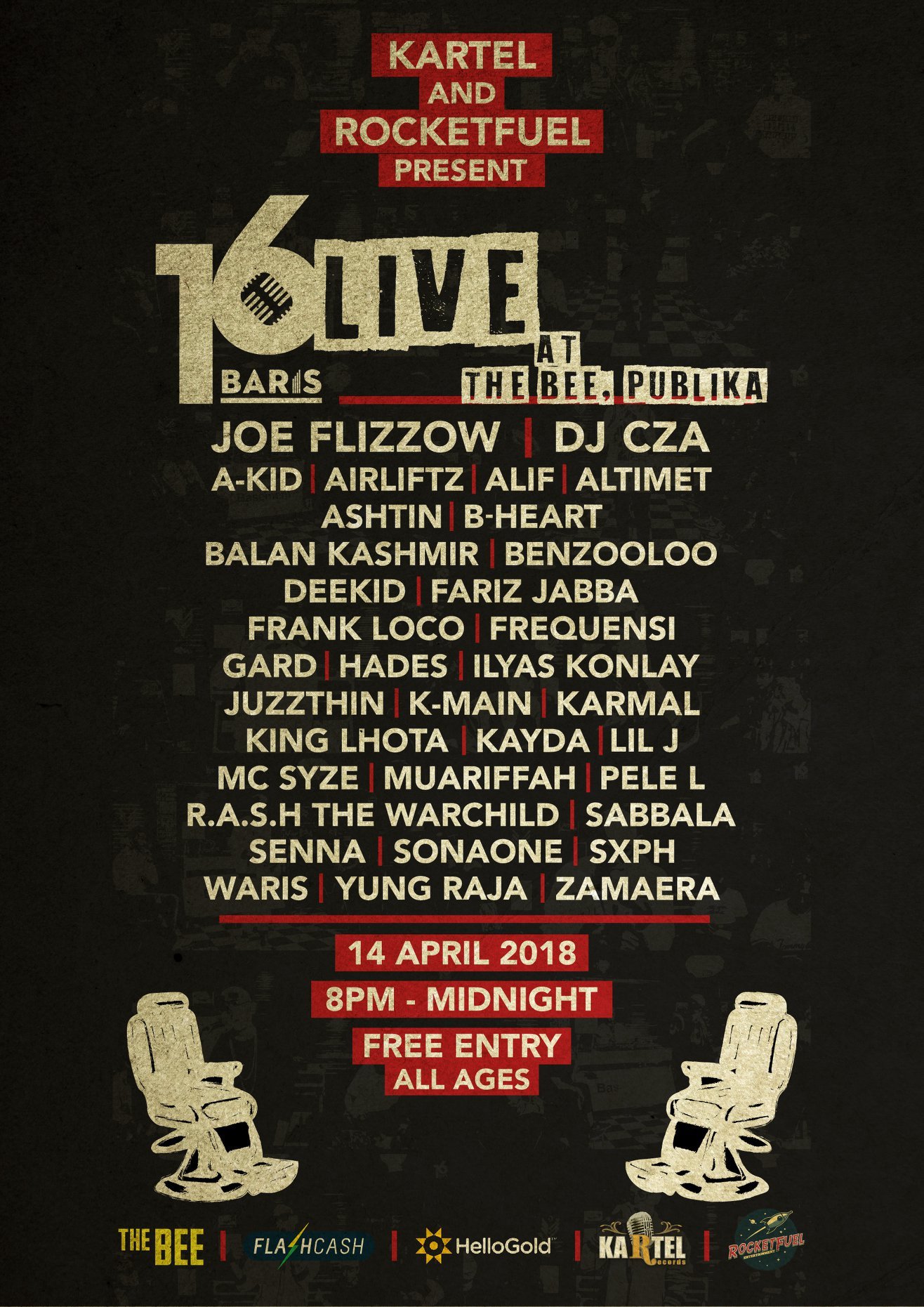