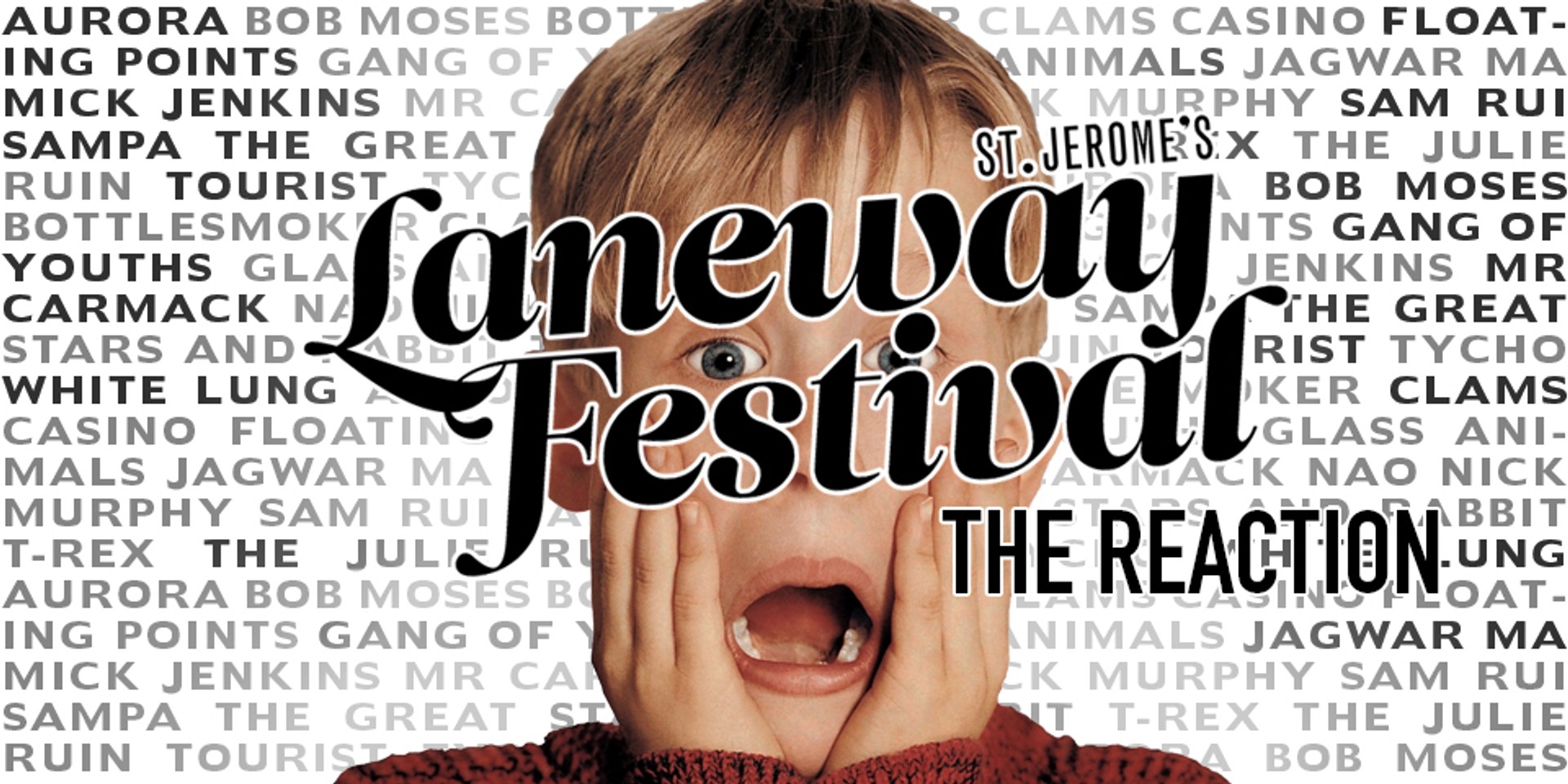 Now that the dust has settled on Laneway Festival's 2017 line-up — or at least, the first wave of acts confirmed — there certain has been a fair bit of controversy over their curation.

Many cries over the lack of "proper" headliners have been heard, and it's obvious that the festival has taken a slightly different approach to their line-up compared to previous years.

Unlike 2016 where there were many indie heavy-hitters (Grimes, Beach House, The 1975, CHVRCHES come to mind), 2017 presents a bevy of new and burgeoning names that simply don't possess the same fan bases as those acts do. But who cares about Facebook followings when it's about the music, right?

Here's what the Bandwagon team, along with some media friends, have to say about Laneway's picks for 2017.

WHO I WANT TO SEE: Mick Jenkins, White Lung, T-Rex

I must admit, my feelings about next year's line-up are very different from this year's batch. Finding out at 7am in the morning that Thundercat and Beach House were coming to SG was a pretty joyous feeling that's awfully rare to have these days, so to look through 2017's line-up is a stark contrast. It's not that I find the line-up mediocre — I'm just not particularly excited about it. But that's just me.

Objectively, this is a brave selection of acts for Laneway. Not only have they gone past the tried-and-true indie mainstays — well, aside from FKA Chet Faker — they've finally added a rap act, and he just happens to be one of the best in hip-hop right now. Add on to that a bevy of groundbreaking electronic producers, along with a riot grrrl pioneer, a local prog-metal band, promising R&B acts, and a forward-thinking rock band like White Lung; they've truly upped the ante on diversity here. While they are bold choices, there are also some head-scratching additions like Tycho and Jagwar Ma, both of whom have already performed in Singapore and have yet to release new albums.

A key factor in Laneway's programming has always been to expose some of these young breakout acts — isn't that what Laneway's supposed to be about anyway? But still, our wallets are also struggling to keep up; perhaps that's why more fans have been begging for predictable, established names (but seriously guys, Tame Impala have already played here twice — you snooze, you lose).

But I digress: Laneway aren't booking agent superheroes, and there's still more to be announced so we'll see. Right now, definitely got my eye on Mick Jenkins, White Lung, Clams Casino, Floating Points (if it's a live show), The Julie Ruin, T-f*cking-Rex, Sampa the Great and NAO.

WHO I WANT TO SEE: The Julie Ruin, Clams Casino, White Lung

I'm over the moon about The Julie Ruin. Seeing Kathleen Hanna live is a privilege I never thought I would ever get to have, so thanks Laneway! Clams Casino and Floating Points were the big pleasant surprises for me. They're two of my favourite producers at the moment, but I assumed they weren't up Laneway's, uh, lane. I've seen Floating Points live once before and it was a magical experience so I hope to re-live it.

Also excited about Canadian punks White Lung! I've been obsessed with them since Deep Fantasy came out in 2014, and was super disappointed they weren't on the 2015/16 lineups.

Finally, T-Rex is the big one for me. Few local bands are as exciting or as virtuoso as these musicians live. Looking forward to the band blowing minds with their avant garde prog-jazz-metal shizz on a big stage. Again, this was another one I didn't think Laneway would ever pick, so I have to applaud them for the bold choice.

WHO I WANT TO SEE: Mick Jenkins, The Julie Ruin, Floating Points

I wanted to go back to sleep but I couldn't handle my excitement. First of all, MICK F*CKING JENKINS. I did not expect that from Laneway. Been listening to him religiously. Not often do we get a good hip-hop act to come here. He's definitely the number one artist that people should check out. #drinkmorewater

Second most excited for The Julie Ruin. I'm still processing this. I could write a whole entire book of how Bikini Kill changed my life.

WHO I WANT TO SEE: NAO, T-Rex, Stars and Rabbit

I'm quite sad that Car Seat Headrest and Tame Impala (people in Manila are deprived of Kevin Parker's live genius) won't be making it to Singapore. Also, with the number of previous acts joining next year's bill — WHERE IS JAMES BLAKE? But happy for the Southeast Asian delegation, I think they're doing a rotation of sorts? MY in 2015, PH in 2016 and ID in 2017.

WHO I WANT TO SEE: Gang Of Youths, Glass Animals, Nick Murphy

This line-up has undoubtedly gone back to its roots of premiering relatively unknown acts in the Asian region, and I couldn't be happier with it. Gang of Youths is the act I’m most looking forward to.

After their invigorating set at this year’s edition of Splendour in the Grass, I believe they are the standout Australian act of the year. Other obvious acts to watch would be Glass Animals (hell yea), Mr. Nick Murphy, Nao, Bob Moses, Sam Rui and Sampa the Great. The addition of hip-hop to the line up in Mick Jenkins would be interesting, seeing how the Australian dates tend to get a good mix of genres over the last couple of years.

side note: Y’ALL CAN MOAN ABOUT THE LACK OF MAINSTREAM ACTS IN THE LINE UP BUT GOY GOY GOY!!1!1

WHO I WANT TO SEE: Mick Jenkins, White Lung, NAO

What struck me about the Laneway lineup this year, unfortunately, was how unremarkable it is. There's no clear-cut headliner (save Chet Faker, given previous Laneway experiences, but will he draw the crowds now that he's known as Nick Murphy?!) and plenty of – frankly – middling acts on the list. Mick Jenkins is a must-see, but on the whole Laneway Singapore has chosen to stay unadventurous when it comes to rap and hip-hop.

R&B seems more palatable, what with Nao and Sam Rui sharing billing. Laneway also appears to be reining back on challenging, aggressive sounds, which is a pity, but I'm glad that this year it's falling to White Lung to fuck it up. Expect mosh pits no less brutal than the ones METZ and Royal Blood have whipped up in previous years.

WHO I WANT TO SEE: White Lung, The Julie Ruin, AURORA

I've been holding out for White Lung, so I'm super stoked they're in the lineup. Quite thrilled about The Julie Ruin, AURORA, and Stars and Rabbit, too! The reveal has certainly convinced me to attend my first Laneway ever.

Check out our playlist for Laneway's 2017 line-up!

WHO I WANT TO SEE: White Lung, Floating Points

Personally, it all feels underwhelming. It's just a hodgepodge of Tier-B (and lower) outfits that I feel okay about catching. All filler, no killer so far — a rather unremarkable way to kick off hype for the indie music fest to attend, 'nah mean.

But it's always good to see bigger love for hip-hop and punk (White Lung FTW). Psyched to see Floating Points (only if he's bringing the full band) and the regional acts, but the rest are pretty ehh to me. Holding out a proper judgment though before the full lineup announcement — surely there's more to this... right?

Check out Ilyas' full piece on the Laneway line-up here.

WHO I WANT TO SEE: Tycho, Floating Points, Sam Rui

Super progressive line-up that doesn't pander. Laneway knows how to build a rep and use said rep to broaden musical palettes. Love it.

Makes me happy to see stalwarts like Tycho and Floating Points on the line-up. Makes me even happier to see Sam Rui and T-Rex representing — very satisfying. Would love to see the heavier side of things be represented as well like with METZ last year.

Well not gonna lie, I'm pretty happy with it — a couple of my predictions list were checked off with this one. Very, very, very excited about Clams Casino and Floating Points! Great to see Glass Animals, NAO, Tourist on there too — they put out great albums this year. Not quite sure who the headliner is meant to be, but maybe they just haven't announced it yet. I would've loved Tame Impala but they played recently, so it's understandable.

People are always going to complain about how it's a shit lineup, or they haven't heard of these acts. But I think Laneway has always been about these up and coming acts vs big established ~indie~ bands, you know?

WHO I WANT TO SEE: The Julie Ruin, NAO, Sampa The Great

At first, I was underwhelmed by the lineup considering how unfamiliar I was with most of the acts. I then checked out the ones I haven't heard of like NAO and Sampa The Great and fell in love. Plus we all get to see the ultimate Riot Grrrrrrrl herself, Kathleen Hanna! And of course, a rap act finally: Mick Jenkins. Looking forward to seeing Sam Rui on a big stage too. It's gonna be chill.

WHO I WANT TO SEE: The Julie Ruin

Okay well, I think general sentiment initially from the majority is that the lineup is slightly underwhelming with no big draw names. But I think that has a lot to do with how spoilt we've been by Laneway in the past.

That said, I would have liked if some of the OZ leg acts like Tame Impala and Car Seat Headrest were able to make it. I'm fortunate to have seen quite a number of acts at Splendour in the Grass in July. I caught Sampa the Great's full set in the early afternoon — really fun and entertaining. I caught Gang of Youths briefly, whom the Aussies are huge fans of. But I'm just excited to see The Julie Ruin just because it's Kathleen Hanna. I just wonder if the Beastie Boy husband will be accompanying her.

Is it underwhelming? A little, but only because local "fans" are spoilt motherf*ckers. Am I gonna go? Absolutely!

WHO I WANT TO SEE: Troy Bolton

After the flashy lineup Neon Lights released, it was going to be hard to out do the festival that pretty much ticks all the right boxes for all kinds of music fans. But that aside, I didn’t think that I would be so unenthusiastic about the recent Laneway lineup. Not to discredit any of the acts, but I didn’t get festival-pumped like when Deerhunter and Foals played on the same bill.

When scanning through the lineup, there wasn’t a moment my eyes rested on an act that made me go WAH. It kinda feels like in the movies when they announce who made it into the school play by putting up the cast list and I’m just aiming to be a small character, I don’t even want to be Desdemona or Mercutio or Troy Bolton from High School Musical, I probably just want to be like Nurse or Troy Bolton’s dad but then I check the list and I don’t even make the cut, not even a random loitering-at-the-locker person. It's a bit sad.