It is undeniable, the effect that Formula 1 has on our nation. You could take a stand on either side, as an avid race fan, adversary to these roaring machines or even sitting on the fence, but on race week find yourself ultimately drawn in. The second day was an assemblage of entertainment, excitement and exhilaration. Various performances at the four stages made sure you were always preoccupied and on your feet. But the evening belonged to Pet Shop Boys.

Many could argue that Pet Shop Boys were years passed their time, with 28 years in service to music; the debate could go both ways. But Pet Shop Boys were always bold exceptions to the concept of time, creating a jazz-ed up album in ‘Electric’ and subsequently making Singapore their regular pit stop after their ‘Electric’ tour held at Resort World Sentosa, in August last year.

The show continues a storming run from last year’s tour, handpicking the favorites and retaining the less appealing ones back home for a rework, leaving behind a condensed set list with plenty of time for a breather. In ‘Opportunities’, Neil Tennant contorts his gloomy, disheartening lyrics of climbing up the income ladder into a passionate expression of scoffing sarcasm. 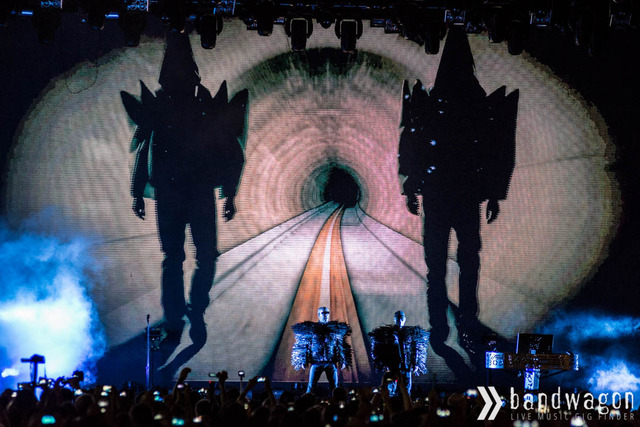 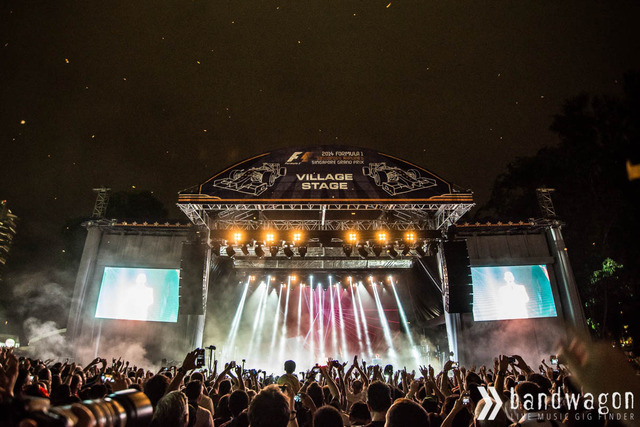 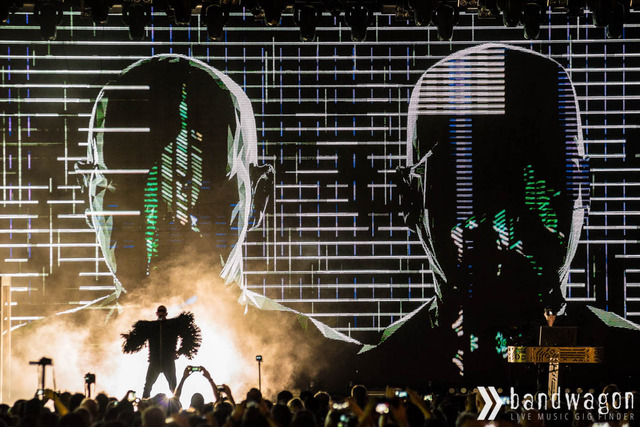 Being motivated by a well-versed designer and choreographer in Es Devlin and Lynn Page, meant that the duo had fifteen outfits to change into and one busy night to fit them all in. In ‘Leaving’, the pair strolled onstage with disco balls over their heads, as lasers and lights bounce off, while ‘West End Girls’ displays the tightly choreographed moves of the dancers onstage with their ornate minotaur headgear on.

It’s not precisely clear why the crowd was not responsive to their earlier tracks but returning their adoration with claps and whistles, seemed to incur a step up in the cover of ‘Always On My Mind’. The track originally done by Brenda Lee, proved to be a proper way to bid goodbye as the on-screen visual content complimented the appearance of the a Moroccan Fez on Neil, ending off with the duo fully convinced of the effect their laser-brimming performance had on the thrill-seeking Singaporean fans.

For the racing enthusiast, the practice races on the circuit proved to be of equal excitement. With the pole position up for grabs, a constant overlapping for first place took place between Fernando Alonso, with support from Ferrari, and Hamilton and Rosberg from the Mercedes team. Vettel, who struck the fastest lap in his Red Bull in last year’s practice, only managed fourth after recovering from engine difficulty in the first practice. But it was Hamilton who leads in pole after switching to soft tires following Maldonado’s unfortunate crash into the walls. 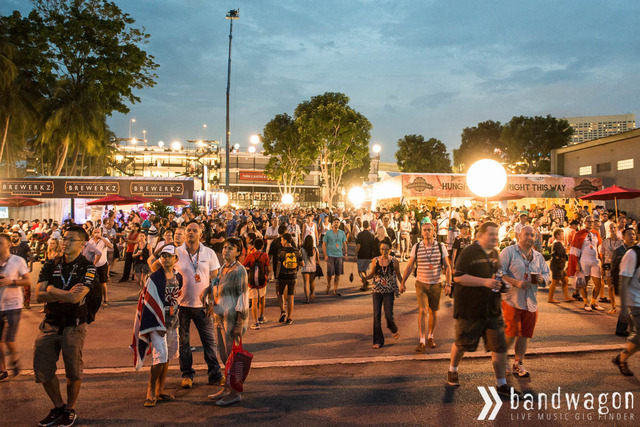 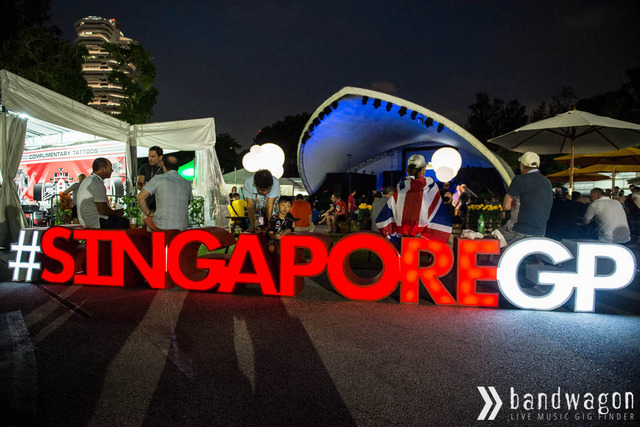 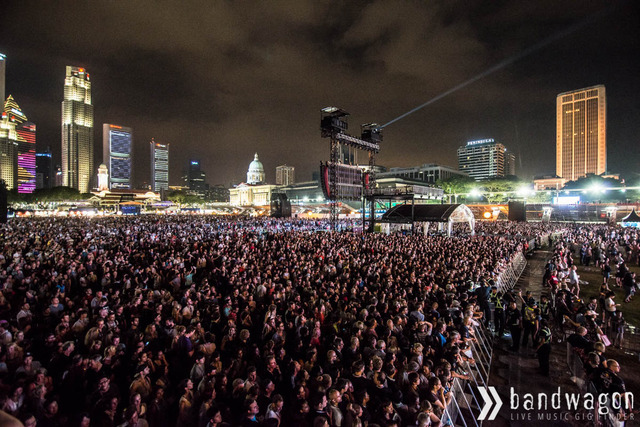 The erratic Singapore weather proved not to be a myth, a sudden downpour arriving just after the practice timings were released, with many scurrying for shelter, others braved the rain for the charismatic Robster, who pulled in the crowd at the Padang Stage.

With his first foray into the unknown world of pop and boy bands as the youngest member of Take That at 16, he is no stranger to greatness and all the flash photography, adopting a bad-boy persona and notoriety in the press. But singing in the rain before the F1 crowd has shown that the seasons has shaped him into a cultured, cultivated and charming man with an unchanged penchant for slow burning romance.

The hits after all, make up the bulk of the set list. ‘Feel’ off his 2002’s Escapology, explores the deeper depths of hearts that goes largely untouched with his faultless voice commanding the roar of the crowd, filling the air with a heavy blanket of nostalgia. Introducing ‘Come Undone’, by conveying his love to the first row at the barricade, he bends and grabs animatedly at the mic before jumping into a medley of Lou Reed’s ‘Walk on the Wild Side’ and U2’s ‘I Still Haven’t Found What I’m Looking For’.

Championing a very “you die, I die’ spirit, much of the 90-minutes set sees Robbie Williams leaving the sheltered stage area and strutting it out on the soaked runway, with the mic-stand doubling as a fashion accessory. While it is apparent that his boyish charms and gyrating hips are still intact, his new album didn’t catch on. A choice between a swing pop album or another with catchy pop tunes and good hooks, would certainly swing you the other way, but it brings about more respect when artists make music for distinct reasons. 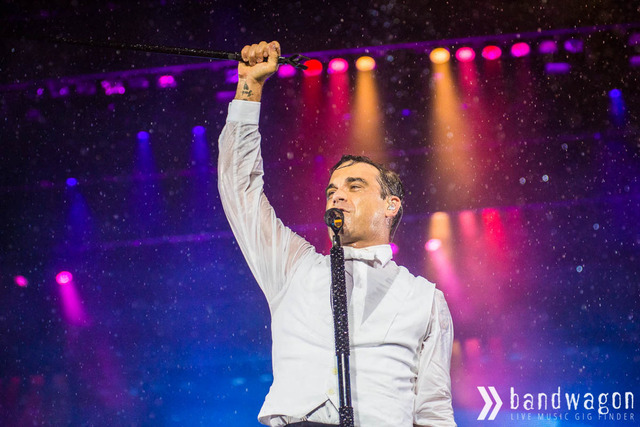 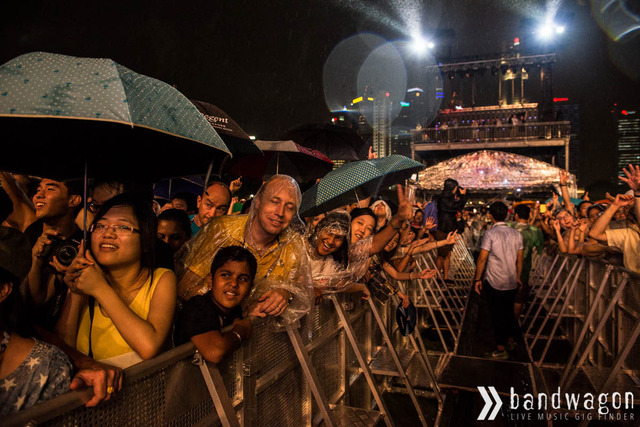 In ‘Shine My Shoes’, he cheekily ropes his troop of vocalists into the downpour to perform off his latest swing album, before mentioning to the crowd “Do we care about the rain?

Coming to a close right before midnight, the charming man sweeps emotionally into the opening verses of ‘Angels’, pausing to hear chorus bounce off the Padang green, orchestrating the crowd while bidding them goodbye. It may take another 11 years for a return, but the Singapore crowd will demand a proper goodbye.